If you love it, Change it: Mario Kart 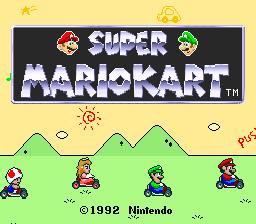 Here's another game I feel needs to be rehashed since the GBA days. Mario Kart has had a long history of ass raping fun. From SNES, to N64, GBA, GC, DS, and now the Wii. Looking at the past games, I personally lost alot of interest after playing the DS version. Although I can't say the Wii version isn't fun (and so far I've enjoyed the few times i've played) but the series has drifted so far from just mindless fun to "I GOT THE BLUE SHELL LAWLAWLALAWLZ" and "I CAN SNAKE SO YOU SUXORS!?!?!?!?!?!!1" So seriously, lets take a look into how the Mario Kart series from being just another Mario Kart to love or hate.

First off are the items back in the SNES days your biggest comback item were the red shell and the lighting. Lighting was so rare (even from last place.) that it was basically a saint when you got it no matter the place you were in. Red shells were homing green shells (but...red.) and saved you in any situation just as long as you shot it with some sense. (Red shells weren't so great on corners.) Plus back then, you couldn't drag banana peelings/shells (except for the computer....) so Red shells basically hit...and hit hard. Now, with trailings of banana peels, 3 rotating green/red shells, it's too easy to not get hit by red/green shells. I say the shells/peels go back inside the cart and are just shot out 1 by 1 instead of the circling. Makes Red/Green shells and more harmful are actually useful.

See the circling red shells? Take those out and hide them inside the cart.

I also feel we need to get rid of those damn Blue Shells. I never liked them and more of a nuisance than the red shells. Especially now that the game relies more on luck than actual fun. All the people in the back will get Blue shells and fire the hell out of those things. This also plays in with the "Luck" card. The game is waaay to based around the rank you're in during the race. What do I mean by this? If i'm dominating in first place, I'll get a bunch of banana peels and single/triple green shells. Less Red shells and other good items will appear. Drop to say 12th place, and the game gives you millions of red shells, bullet bills, ghosts, Blue Shells and all the better items. Granted sure such a thing should happen, but it makes the game way too unfair and lopsided. Which is another reason why the Blue Shell is just as cheap as it looks. Sure it hits first place, but with the amount of blue shells that are thrown out in higher circuits, it's problematic. The game needs to be fair to everyone and not so loving to the back of the race. Sure you won't need a blue shell or something like a ghost item, but items like red and green shells are awesome when you put them out from behind the cart. It at least helps stall the others.

Nintendo, take these out and return our Feathers!!

Another problem, characters. We don't need to keep seeing Waluigi in every spin off game. Either make him a useful character or do off with him. Seriously, who likes Waluigi? At least Daisy was in a actual Mario game (a great one at that.) but Waluigi? It's nintendo's poor response to a evil Wario for Luigi. But besides him, I sense a Street Fighter relapse here. Your regulars are there and will stay there. (Mario, Peach, Luigi, Bowser,DK,Waluigi, Yoshi.) your maybes (Toad, Wario, Koopa Troopa, Boo, Shy Guy.) and then your toss ups. Waluigi's in the stay only cause Nintendo can't seem to do anything outside of party/multiplayer games with the guy. Toad is a 50/50, Wario now is in just about every multiplayer game thanks to his popularity. As i'm great to see Koopa Troopa to return in the Wii version, i've missed him in the past reincarnations (and no, Dry bones does not count.) As many characters Nintendo has in the mario universe, you'd think they'd either

- Branch off to other Nintendo games for characters
- Actually use other unique Mario Characters.

I'm actually rather surprised Nintendo hasn't included a Samus or Link character into the games and i'm quite happy to see they've gone deeper and included more enemies. (the flower, shy guy finally, the egg throwin dinosaur who's name I can't remember.) But I seriously wish they'd get rid of the Baby characters. The baby ordeal's getting alittle out of hand. We have 1 mario do we need the baby version? That character model could be used for a actual cool character (where's the hammar Bros?)

You Get out of my damn party games you crappy evil Luigi design!!!!!!

I'm not through yet either. Lets back to the Items Remember back in Super Mario Kart where you'd have Bowser or Peach in front of you and they'd randomly drop a small mushroom or a fireball? Yea I'd like to see those return except we can actually use them. I hated seeing Bowser and Peach dropping items I could never drop. (though I can't remember for sure if you could actually drop Bowser's fireballs as him.) It's not hard to ask is it? I also want my Feather back. It may seem pointless but I loved jumping over half the course on some levels.

Those little Yellow dots on the bottom screen? yea...those are coins on the track.

Now something I would really love to return would be the coin system. For those who don't remember (or too young for my favorite Mario Kart.) There would be coins layed around the stage. If you had no coins, you would pretty much get bumped around like a broke punk. (and I mean not just bumped, you'd get bumped and then spin out.) You would also lose a coin if you were bumped into. You'd also lose 3 coins for falling off the stage. Somewhat of a tow truck service and "Drive better ass!" penalty. There were more than enough coins on stage for 3 laps. Now that weight and class size is somewhat playing a bigger role, you can bring this back and depending on how big/small your character was, they'd lose different amounts of coins than just 1. (1 for lightweight characters, 3 for heavy weighters.) just an idea for nintendo to amp this series up a bit.

Now the last bit I have to add is the Snaking. I personally hate it as it's just drifting back and forth. People claim it cheap/cheesy/taking the fun out of the game. Others think it's skill. Now as people seem to like this, why doesn't Nintendo just add a "Snaking mode" where there's no items and snaking allowed. Obviously snaking wouldn't be allowed in regular play (something like locking out faster boosting in regular play.). This way, kids and those snake whiners can have it their way and stop making such a fuss when someone snakes.

There's more than enough to change in this series to make it better than it already has become. I'd feel this would be just small step to betterness. (yes, just A SMALL step. as I feel this game needs a big fixer uper.) Because lately the series has lost its touch with all the additions going on.
#Community
Login to vote this up!