Why I love everyone that came to the Baltimore NARP. 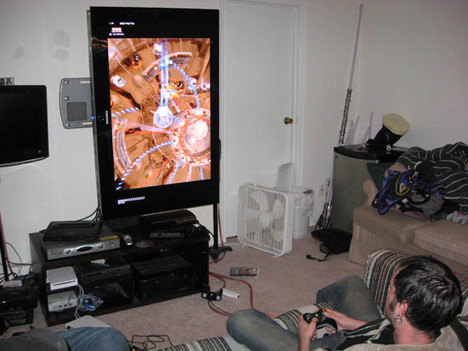 Well the Baltimore NARP has come and gone and what a NARP it was. Sadly I have no pictures to go along with any of this, header is courtesy of Blindsidedork, but I'm sure there will be some galleries/vids posted by other people. Off the top of my head here are my highlights from the weekend.

Topher playing Ikaruga and drawing a crowd. The onlookers watching in near silence.

Nick is really a rock star disguised as a video game blogger. I fully expected teenage girls to bust through my front door and throw their panties at him while playing Rock Band.

Shin Oni for being my chief opponent in SNK fighters. I look forward to battling my newest rival again.

Rhibiki and ZargonX both being asked to bring an extra Rock Band guitar and both forgetting. Then the two of them along with our friend Klimas riding to Rhibiki's house to get one and all of them forgetting to get the USB hub that was also requested :P

After issues with instruments, getting online, speaker problems and having to use my HDDVD drive as a USB hub Rock Band actually being up and running.

Rockvillian asking if he could sleep in my office with my toy collection - and actually doing it.

Blindsidedork playing through nearly all of Earth Defense Force over the course of the weekend with various partners.

Playing the shit out of Windjammers with Bloodylip and Shin Oni.

Everyone getting hands on time with a Vectrex and a GP2X courtesy of Procyon.

Playing the Gamecube FZero and finishing last in every race. Then playing Mario Kart for the Wii and having the same thing happen.

Soulhammer and his friend Ryan discovering Boom Blox and then kicking our asses in it.

HarassmentPanda's girlfiend Katie being a real champ with all the nerds around. (I think the alcohol helped).

Watching Cowzilla dip a cheeto in queso dip and eating it......and then watching him do it again.

What are your thoughts on zombies? (had to be there)

Everyone I showed my office to thinking the Macross toys were Gundams. :P

Playing Rock Band drunk off my ass with just about everyone there.

Having a Rock Band drum stick break and Topher magically appearing with a brand new set.

Blindsidedork playing TF2 after hours on the 360. I'd estimate that I received 5-6 negative feedbacks.

Steamrolling through AvP and X-men arcade games with 3 and 4 players respectively. Really brought me back to the arcade gaming of the 90s and how social it was.

Watching Shoot 'em Up as a group.

Most importantly the fact that most of these people had never met in person yet because of Destructoid everyone was instantly friends. You guys are all amazing.
#Community
Login to vote this up!

Random shit:
I'm a 27 year old male living in the greater Baltimore area. Besides gaming I am interested in football, movies, toy collecting, manga, and anime. Wow that sounds nerdy but fear not I don't live in my parents basement. I own a house and even date girls. I can also blame the toy collecting on my profession. I'm an account manager (sales) for a collectibles company which is part of a larger toy company.