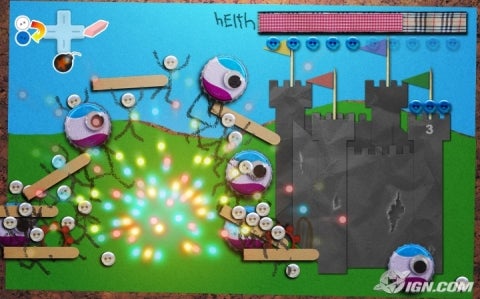 Defending is fun enough to hurt!
by shitakemushroomninja

May 14, 2008 - Have you played the flash version? If so, skip to the next paragraph. Defend Your Castle is all about clicking stick figure people with your mouse/wiimote and dropping them to your doom so they won't destroy your castle. Along the many, many (AKA endless) stages, you will earn points and use them to heal and fortify your castle, add the ability to recruit your enemies, have archers, healers, and mages. Each level ramps up the difficulty until you have difficult enemies like catapults and giants and a smarting wrist (see more later).

So what makes the Wiiware version different from the free flash one? Besides a complete cosmetics change (which mimics kid drawings with hilarious results, such as tongue depressers for battering rams) the game also adds new spells (3 instead of 4, even though it uses the D-pad), multiple save slots, and drop-in drop-out multiplayer for up to 4 people. The new spells are eraser (surprsiningly erases an enemy), spray paint can (sparys an enemy, instantly converting an enemy), and bomb (shockingly, kills all in its radius with an exploding bomb.) The multiplayer is great in that it ramps up the difficulty and enemies when there are more players instantly and drops it back down when it senses someone leaving or not playing.

The gameplay is very simple. Pick up an enemy and drop them (or smash them into the ground!) They will die, thus becoming unable to attack your castle. But as there are more and more (and increasingly tougher) enemies on screen, you start to develop strategies on how to best survive, such as saving spells for giants or making sure you aren't swarmed by blowing up crowds. This is where the game's strength lies, especially when you reach the stages after 20 or 30. The game never ends until you call it quits, and if you fail, you can restart from the stage or your save point (up to 3!)

It should be noted that the repeated motion of throwing people up can hurt your wrist after a few hours. This might be seen as an unforcunate drawback on an otherwise enjoyable experience.

While some may tire of the admittedly repetitive gameplay, there is probably 4-5 single player hours here and countless more when you have a friend help you defend. For a 500 point game (which takes 122 blocks) you get a lot of fun. It's also a pretty funny game, with some hilarious easter eggs. Watch the credits if you don't believe me.
8.0 Presentation
For a $5 game, you get some decent stuff here: easy mode, heroic mode, multiplayer. Oh, and the ability to kill thousands of stick figures!
8.0 Graphics
The graphics have a funny style to them, as the worlds look like they were drawn by some elementary kids with clouds supported by ropes and battering rams that are actually tongue depressers
6.0 Sound
There's some great epic music on the main menu that is sadly not used in the actual game, which consists of screams and thuds (and explosions where someone goes KA-PLOOORGH!)
8.0 Gameplay
Very simple but the startegy required later on adds a layer of depth that you wouldn't expect from it
7.5 Lasting Appeal
An average of 2-5 hours (depending on your skill and enthusiasm) worth of single player. Plus, this will be a multiplayer favorite, especially for people who aren't great at games.
8.0 OVERALL
(out of 10 / not an average)
#Community
Login to vote this up!

I have a Atari 2600, N64, GCN, Wii, GBA, and DS. Of those, I play my Wii and DS the most. If you make a phallic joke about that, I will stab you through the computadora. What am I playing right now? Check my blogs, duh. Well, chow you later. Wait, what the hell does that mean?