Brawl Stages: The Good, The Bad, and The Meh. Pt.5

Hey folks, how's it going? It's been a while, almost 3 weeks I believe. Sorry to leave any fans of the series high and dry (and cliche-less), but your old pal Flattop J-man has been busy with school, job hunting, getting drunk (perhaps a little too often) and, wait for it, actually playing games. I'm excited to report this to you, as I have played a lot of the games I had backed up in preparation for GTA4. I finally started and conquered Tales of Symphonia, which was amazing. Glad to see that they're making a sequel, despite that fact that it has a different lead character. I also beat a lot of my virtual console stuff, such as Gradius 3, Contra 3, Fantasy Zone, and Castlevania. All of which were friggin difficult, but very rewarding. Especially Fantasy Zone. BUY IT. I also just started Mario Galaxy, so expect a painfully late review of that in the near future.

The time away has done me some good. I am playing Brawl less and less, so writing about it was getting very difficult. But since writing this (and the next installment in preparation) words have started to flow better, and I'm not so burnt out on the subject anymore. I'm not saying to expect a step up in quality over the next few entries, but my interest has been revitalized and I'm doing my very best.

I'm also considering picking up another 4000 Wii Points at the store tomorrow, as I had the pleasure of selling Assassin's Creed to someone on Craigslist after 2 months of attempting to do so. So any recommendations you have are greatly appreciated. Though I'm picking up Lords of Thunder for sure.

So anyways, if you're reading this, enjoy the article and expect the rest of the entries to follow soon. I'll do my best to get at least 3 a week out.

Oh Super Smash Bros Brawl. What an entrancing effect you have on people, throwing people into rabid debate about every single aspect of the game, even stealing time and friendships from innocent people. Well that is just nonsense; the internet needs of a voice of reason/martyr, and I have to try my best. 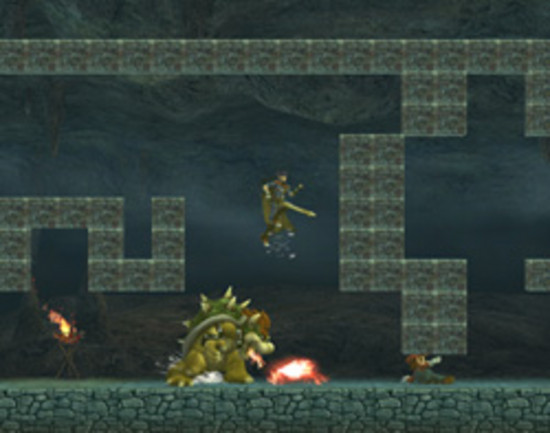 Flavor: This stage is rad. I say that because as a child, playing the original Super Mario Brothers caused me to utter that same word. And here it is, recreated more than a decade later in the sequel to one of my favorite games of all time. It's a completely faithful recreation of stages 1-1 and 1-2 from the original game, and sans enemies it is perfect. They were taken out for obvious reasons, so I can't hate on it for that. Even the item blocks are the same! Though I suppose that they give random items, so that's a bit different. The music is awesome, and the new, aged approach to the art style is pretty cool, not to mention clever. Nice music, as well.

Functionality: Well, it's stages 1-1 or 1-2 on a loop. Sorry to say this, but that translates into shit as far as a fighting game is concerned. The level is constantly scrolling, so it adds an interesting dynamic to combat, but those (somehow) unfamiliar with the layout of these stages will find themselves pissed off at the constant stage-caused deaths that befall them. 1-1 isn't nearly as bad as 1-2, as there are less massive pits and more items, plus that sweet flag at the end.

Fun: Now I know that the things I've just said may not have exactly swayed you into believing that this stage is shit. That's understandable, as this stage is so odd to play on that it's very difficult to put my qualms with it into words. Though if you have played on it, you understand; despite the awesome design, it's just not any fun. If you haven't played on this stage, do so. You'll feel the same way as I did, appreciating the stage for what it is, yet lamenting actually playing on it. I love this stage, but at the same time, I can't fucking stand it. My mind is aflame.

So concludes part Five of my critique. I put a lot of work in to it, and I hope you all enjoyed reading it. I can has friends now plz? So you've heard me ramble on about these stages, what are your opinions? Stay tuned, your most revered and detested stages could be in the next installment!