Brawl Stages: The Good, The Bad, and The Meh. Pt.2

3:56 PM on 04.15.2008 (server time)    0
Oh Super Smash Bros Brawl. What an entrancing effect you have on people, throwing people into rabid debate about every single aspect of the game, even stealing time and friendships from innocent people. Well that is just nonsense; the internet needs of a voice of reason/martyr, and I have to try my best. 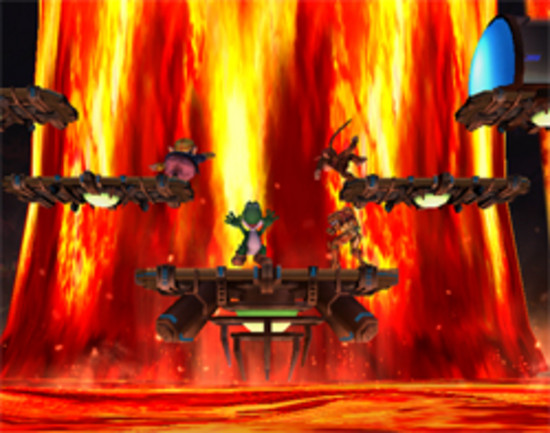 Flavor: Ah, Super Metroid. A prime example of 2-D gaming, this game has a special place in many gamers hearts, worldwide. It only makes sense that it would be represented in Brawl, and Norfair is what we get. The magma caves deep in the Planet Zebes are home to Ridley's lair, and lots of lava. Not a lot to go on, but if you look at the stage and the area of the game side by side, the stage is a fair representation. This place is full of hazards, as is the stage. When it boils down to it, however, this stage is very minimalistic in it's presentation; there is lava, there are platforms. That's it, and that's all there needs to be.

Functionality: This stage is comprised of 5 small platforms in a wide "V" formation. There's not a lot of space to run around, and chances are you're just going to be jumping all over the place. On the good side, all the platforms besides the bottom one can be passed through, so you aren't going to bump your head trying to get back and get screwed out of a life. Hoorah for that. The gimmick here is the lava waves. They come from the sides in the form of huge walls that hurt you badly when you're thrown in to them. These are arbitrary and fairly common, so expect to see a lot of them. The lava can also rise from the bottom, making it so you can cheat death at the cost of health, which is cool and all, but we've all seen it before in Melee. And then there's the Giant, stage raping lava tide that moves from the background in to the foreground, causing severe harm and most likely death to all that get caught under it. When this happens, you can theoretically get into a capsule that appears and be spared.

Fun: Both Metroid stages seem to have the "If you don't know what you're doing you're probably going to get screwed" mentality, though I think this one is worse in that respect. The platforms are really too broken up, most of the battling takes place in the air while slower characters get the shaft when it comes to ground space. There's just not a lot of place to rest, and while it keeps the battle frantic, I don't think it's especially fun. The whole lava wave thing is what kills it. The battle for the capsule generally ends with all the combatants getting burned, and if you haven't played the stage it'd be tough to figure out that you have to hit the blue doors to even get it to open, despite the fact that it looks like it can easily be jumped into from the top. Most of the group I play didn't figure that out until maybe our 6th brawl on that stage. Sound like fun to you?

Songs of Choice: Marionation Gear, Main Theme (Metroid) (besides that dumb-ass talking in the beginning)

So concludes part two of BS: tG, tB, atM (Oh that's so catchy...). I put a lot of work in to it, and I hope you all enjoyed reading it. So you've heard me ramble on about these stages, what are your opinions? Stay tuned, your most revered and detested stages could be in the next installment! Also, if you aren't reading this, you ought to be. But chances are if you're a fan of this game you already are.