Brawl Stages: The Good, The Bad, and The Meh. Pt.1

3:43 PM on 04.14.2008 (server time)    0
Oh Super Smash Bros Brawl. What an entrancing effect you have on people, throwing people into rabid debate about every single aspect of the game, even stealing time and friendships from innocent people. Well that is just nonsense; the internet needs of a voice of reason/martyr, and I have to try my best.

The following are my opinions on the Good, the Bad, and the Average stages of brawl. This is in no way tourneyfag material; each stage is critiqued on flavor, functionality, and fun (The 3 F's, perhaps?). However, their final ranking is almost completely dependent on how much fun I had while playing this with a large group of friends, drunk and sober alike. Final Destination will not be named as the definitive stage, I promise you that. I will be counting up from the worst of the best, the worst of the average, and counting down from the best of the worst. The superior stages, and the absolute worst, will be revealed over time, or at least that's the idea. Without further ado, here is the beginning of a magically journey: 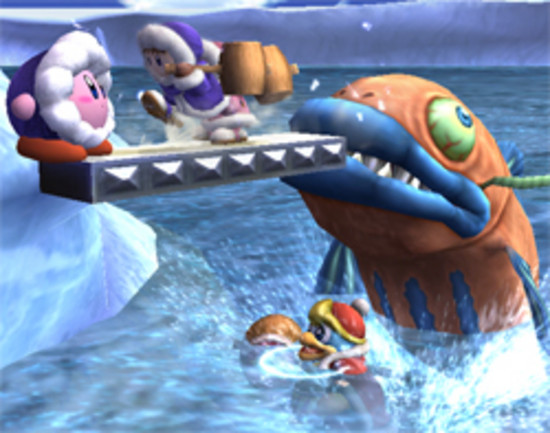 Flavor: I like this stage. A lot. It's pretty much a beautiful version of the NES classic, and then is goes and changes completely by way of the summit itself breaking off of the mountain and sliding down in to the ocean. There's not much to say; there's ice, it can be climbed, it looks like an update of the actual games. It even has the egg plants from the original. It's awesome.

Functionality: So the stage itself is pretty much just two tiers (again) with platforms acting as a way to get to the top. There is a divider in through the center in the middle level of the stage, so only the top and bottom are really suitable for beating ass. There's a regenerating piece of ice that can be broken towards the bottom of the stage that can be broken as well as a platform on the other side of the divider than can be made to drop down, so that opens it up a bit. The first part of the stage is pretty standard, the stage is as I explained it. When the summit starts to slide down the mountain, the wind pushes your character up and back, so the gravity is quite a bit different. Once you hit the ocean, the stage is back to normal. Or so it seems. The bottom level is submerged in water, leaving you open to instant-kill giant fish. So in other words, stay off the bottom or else.

Fun: I like this level quite a bit, there's a reason it's the best of the 'bad'. However, it's just not very much fun to play on. The center divider breaks up the action too much, the gravity as you're sliding down the mountain side makes being juggled an inevitability, and the bastard fish is a pain whenever it shows up. All of these things make this a stage one that elicits groans from everyone playing whenever this show up as a random selection. It's an interesting stage, and that's about it.

So concludes the first part of my hopefully long-running series of blogs. I put a lot of work in to it, and I hope you all enjoyed reading it. So you've heard me ramble on about these stages, what are your opinions? Stay tuned, your most revered and detested stages could be in the next installment!