Mario Kart Wii: Finally a game I don't have to wait ages for 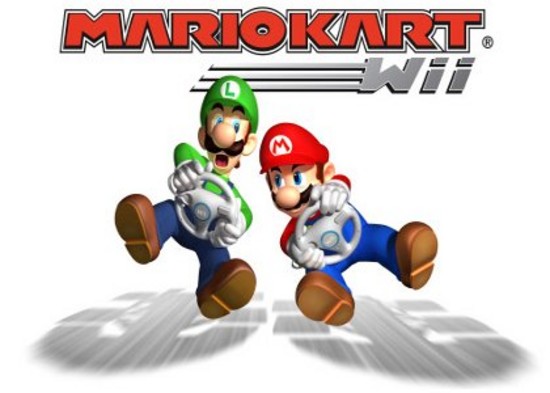 Being a European Wii-owner I usually get all the good games later than the rest of the world (see SSBB or Super Paper Mario for example). But not this time: Mario Kart Wii is out since this friday and I wanted to share my first thoughts about it (I put around 10 hours or so into playing it so far):

One word: appropriate. It certainly isn't one of the best looking and sounding games on the Wii but it runs smoothly all the time and always has that typical Mario-feel to it, that you will either love or hate. Like any other game on the Wii graphics aren't that big of a deal anyways (at least to me).

The music is OK, but there aren't many songs that you will instinctly remember besides the old-school music of the SNES and N64-tracks.

Having the minor part out of the way let's get to the important aspects of the game:

After starting the game you can create one of four licenses and assingn your Mii to it which will be the avatar of this license from there on. After that you have to choose whether you want to play solo, with up to 3 other players (both offline) or if you want to play via WiFi connection, either alone or with a friend on one console.

Also, you have the Mario Kart Channel where you can check if friends (grr... friendcodes) are online, download ghost data from other players, see rankings, play contests (not available now) or compete against a random ghost. As you see Nintendo has put in all the stuff you can expect from a racing game going online - thank god. You can also download the Mario Kart cannel to your Wii and use it in the Wii menu like the weather or the news channel so it isn't necessary to boot up Mario Kart to see if your friends are online.

If you play alone you have the following modes: Grand Prix, Time Trial, VS race and Battle mode.

Grand Prix is and has always been the heart of the solo Mario Kart experience. Race your way through the 50, 100 and 150 ccm classes and unlock new characters and vehicles.

In Time Trial you can try to get the fastest time either with or without ghosts from other licenses, friends or the best players world-wide.

The VS race let's you race against the computer any way you want it. Choose the ccm-class, the difficulty, if you want to use karts, bikes or both, the order of the tracks (choose the tracks, race them randomly or in order), what kind of items (standard, frantic, basic, none) and the number races you want (2 to all 32). There's also a team mode which simply adds together all the points of one team.

Battle mode includes the good-ol' Balloon Battle (pop the three balloons of each contestant with items) and Coin Runners (each time someone is hit with an item they loose coins - the one with most coins wins). Those two modes are customizable as well but only playable in two teams.

If you play offline, you can play up to four player splitscreen races in VS races and Battle mode which you can also customize like I explained before. If you don't like CPU-drivers to disturb your assault on your friends you have the option to turn them off. The only thing I don't like is that you can't turn off teams in Battle mode to have a free-for-all, but hey, no game is perfect right?

You also can't play through the Grand Prix cups to unlock stuff. If you want to complete one particular cup you can still just choose the tracks of that cup. After each race points from 0 to 15 (like in Grand Prix mode) are awarded - after all the races the player with the most points wins.

This is where the game truly shines and instantly got one of my favourite online games. Especially, because I haven't had any lags and always found players to compete so far.

The Online mode can be played either alone or with one friend on the same console. You only have all the options you have offline (save for the CPU-controlled characters) if you create a room for your online friends. Before each competition you gather with your Miis in a lobby and chat via predetermined text-sets. To me this is the biggest let-down of the online mode... just imagine hearing people from all over the world swearing at you because you kicked their butt with a red shell right before the finish line...

If you don't have (or don't want to play with) online friends you can choose to race against opponents from your continent or from all over the world and play VS or Battle mode. Those modes aren't limited to a certain number of tracks like they are offline but go on infinetly after each track as long as there are other players joining that game session. Before each race everyone votes which of the tracks they want to be played (you can also choose a random option if don't want to pick a track) - after that, one of the votes is randomly picked.

The online point system is a bit different from what it is offline - simply because you don't race a set amount of tracks. Instead you have a rating system starting with 5'000 points. You win or loose points according to your finishing position and the points of the other players competing against you (just don't ask me how they are calculated...).

If you ever played Mario Kart, you won't have any troubles here. Snaking is gone but you can still charge up your powerslide in two levels (blue = small boost and red = big boost). You also can perform tricks while in mid-air to get a small boost after landing. Don't worry, Mario Kart hasn't gone SSX: you start a trick simply by pressing the d-pad or shaking the Wiimote and you can't fail it.

The bikes add a bit more variety to the game: naturally they are a bit faster especially if you do a wheelie (more speed but unable to corner) and are better in cornering but are easily knocked away by the karts and don't have the ability to perform a full charged-up powerslide.

There are two new items: the Mega-Mushroom from New Super Mario Bros. makes you huge and you can drive over items and opponents to squash them (they will be stopped drive a bit slower for a few seconds). The Flash Cloud makes you drive a little bit faster but after a while it will unleash a lightning to shrink you - fortunately, it can be tossed to an enemy simply by bumping into them. The last new item is the POW block, it will send out shockwaves and cause the players ahead to rotate and stop - they will also loose their items. All the old items are returning: red shells, green shells, blue shell, Bazooka Bill autopilot - you name it, it will be there.

In total there 32 tracks: 16 new and 16 old ones (from SNES to DS) divided in 8 cups with 4 tracks each. The first 4 cups are all the new tracks - the other 4 are old ones. I won't get into detail, but I can assure you the new ones are all designed as brilliantly as always - ranging from Daisy's circuit to Wario's Gold Mine.

Even if your interest in Mario Kart Wii is slim: get it when it's out. It's one, if not the best title in the series with it's new tracks, new items and especially the two player online-mode. I can't imagine any other multiplayer on Wii that will rock that hard (besides SSBB I assume, but what do I know... I'm European and therefore blah, blah, blah...

Anyways, if you have any questions, let me know.

Blog can also be found at: http://stb.gametrailers.com/gamepad/index.php?action=viewblog&id=281418
#Community
Login to vote this up!

My gaming systems (newest to oldest):