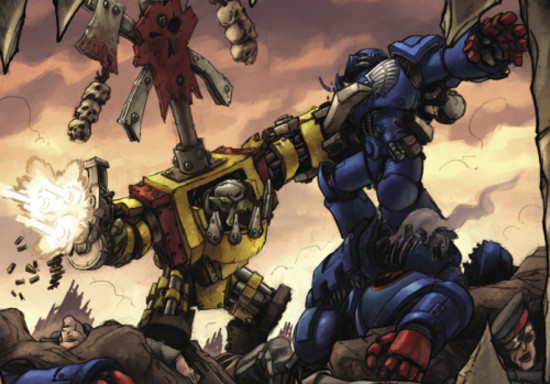 This is pure copy and pasta:
"PC Gamer magazine (UK) has scooped first real details on THQ's Warhammer 40,000 MMO, shedding light on the game which was unveiled in March '07.

According to the info, the title's definitely an MMORPG as opposed to what could have been a Planetside-esque MMOFPS. But despite that it appears developer Vigil Games is aiming for a reasonably in-depth combat system, as it's orientated around cover, suppressive fire and flanking.

Firefights will take place on a larger scale than those planned by EA Mythic for Warhammer fantasy MMO Age of Reckoning, says the info. Players will be able to form squads, and presumably the WH40K equivalent of guilds - Chapters, will that be? - although that's information being kept under wraps at the moment.

"All of the races important to Warhammer 40,000 lore (not to mention the fans) will be represented", creative director Joe Madureira has explained, adding that "We want each and every race to have weight in the game world... and feel distinct."

He adds there'll be "Tons of stuff hanging off your character, weapons, scrolls... we are going to have the coolest looking characters of any MMO, ever. Once we begin releasing images, feel free to call me on that."

Vigil Games general manager David Adams, meanwhile, cryptically offers that "The term 'Battleground' takes on an entirely different meaning" in the game - which is obviously a reference to WoW's Battlegrounds PvP stuff but who knows what Adams actually means?

Why would i be excited for such a shitty news?
Two words: Joe Madureira.
OH GOD! He is like my favorite artist ever, he is like the reason why i draw hands squarish, sqeeeee.
Now i am mad gay for this game, looks like i am gonna wait for 3 years till it gets released. Which i donīt care since itīs Joe Madureira.
gay gay gay

Source: CVG
#Community
Login to vote this up!