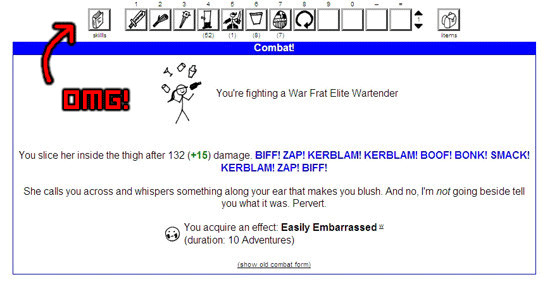 It's about time Kingdom of Loathing got some coverage on here, even if it's just on the c-blogs. Why, you ask? What's my justification? Because it's awesome, that's why, bitch.

For those who don't know, Kingdom of Loathing (KoL) is a text-based MMORPG. It's extremely low-tech, and 100% tongue-in-cheek, and if you don't like it, then you are a terrible human being. Technically, the game has been in beta since its inception in 2003, and the game recieves multiple updates every week -- some big, some small. So, once or twice a month [or whenever I get around to it], I'm going to write up one of these recaps profiling the latest additions. Capiche?

What's that? This isn't relevant to you? Well, then start playing the game. Then it will be. Here's the recap for March.

The Combat Action Bar
I'll start with the (in my opinion) most important update, pictured above. They've added a Combat Action Bar! Yes, that's right, folks, we're in deep MMO territory now. You can customize the bar with whatever skills, attacks, items, or functions you want. Each box is also attached to one of the number keys (as well as "-" and "=") for convenient access, with several different rows you can cycle through. To enable it, go to the Account page and, uh, enable it. (It's only known to work in IE and Firefox, so everyone else may be stuck with the old buttons and drop boxes. Nyah nyah.)

April's Item of The Month
April's Mr. Store item is Sp'n-Zor's Grimoire of "Tasteful" Gifts. As with the previous Grimoire, this one allows you to summon useless (but fun) gift items, albeit of a slightly different variety this time around. Like usual, it'll cost you one Mr. Accessory to buy or, in big-people talk, a $10 donation.

Of Gift Items and Hilarity
Gift items can now be traded with other players, if you're into that sort of thing. Also, speaking of gifts, if you're one of the lucky few to have that Summon Hilarious Objects ability, you will now have three new items at your disposal.

Elemental Resistance Changes
Rather than trying to put this in my own words (I can't), I'm just going to quote the words of Jick, the mighty boss of KoL:

There is no longer a fixed cap to the number of levels of resistance you can stack up. After 5 levels, however, diminishing returns kick in, and each successive level gives you a smaller percentage damage reduction than the last.

Rather than having a higher cap, Myst classes now get an innate 5% reduction in elemental damage taken from all sources on top of the reduction from resistance equipment and effects. This bonus doesn't impact things like the resistance requirements for quests, it only applies to damage.


Not-So-Critical Changes to Critical Hits
The way critical hits are determined has also been tweaked. As Jick explains it, it used to be that once you hit a monster, it would then roll to determine if you got a critical, then the damage would be doubled. Now, it rolls for a critical before it rolls for a hit. If you roll a critical, then your attack will automatically hit the monster and the damage will, as usual, be doubled. The change goes for both ranged and melee weapons, and the only time it won't roll for a critical is if you fumble. So, um, yay?

Disco Fever
The Disco Bandit skill "Crossbow Fever" has been renamed Disco Fever, and now it effects all ranged weapons, not just crossbows. Why should crossbows have all the fun? Screw 'em.

Pie Updates
Key Lime Pies will now give you back the Legend keys you baked into them, when you eat them. Digital and Star key pies now also give you back some of their ingredients, too.

- Your campsite dwelling now has a magnifying glass over it. If you click on it, you'll now see the contents of your house (such as a beanbag chair or a gauze hammock).

- You can now drop out of Ronin and downgrade to a casual ascension, thanks to a new option in the account menu. Ronin might suck, but casual is still teh laym.

- Rings of Gain Strength, Adornment, and Increase Damage have had their enchantments doubled.

- In your inventory, the name of each equipment slot is now a link to that particular section of the equipment page.

- Pastamancer lo mein dishes no longer require the Wok of Ages to cook.

Lastly, some serious business. KoL member Aces44 was recently attacked by her significant other, and their son was killed in the process. On top of all the "normal" shit that comes with this sort of thing, she's dealing with some financial issues. There's a number of ways that the community can help out, and the details can be found here, if you're interested.

--
These are not necessarily extensive lists. I've just picked the most relevant-to-players updates. As usual, you can find all trivial updates here. If you haven't tried KoL, please do so, because it's the only chance you'll ever have for happiness. My character's name is Hugh Beaumont, so feel free to stop by for a free beer and some giggle. Also, lucashoal runs a Destructoid clan. Visit the wiki for more information than you'll ever need.
#Community
Login to vote this up!