4:10 PM on 03.31.2008 (server time)    0
This is what happens when I don't go to work, I post stuff. That's also the reason every picture has a link to a bigger picture, that took waaaay too long. I was going to do a video review of some shitty ass SNES game but I'm too lazy and I don't feel like editing video today.

*Rock Band for the 360 setup
*Guitar Hero controller for the wii and 360
*A few DS, PSP, NES, SNES, and Sega games
*the nude maid (she didn't want to be photographed)


All the cool kids are doing it so I thought I'd share my passion with the army.

All three of my babies in one room 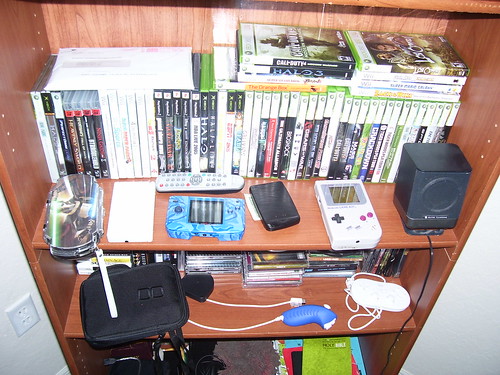 The second shelf holds DS, PSP, and random cds I own.

Not playing any games on this.

This is where the Retro gaming goes down; the living room.

Own both the rectangular and square Sega, only one works though.

What is that red thing in the corner?

Yes, I have two virtual boys. I don't know why.
#Community
Login to vote this up!