When I was younger there were two genres of games that I would have gladly donated all my internal organs and sold my Centurions to play more of. One was point-and-click adventure games; the other was the platformer/puzzle games like Out of this World -- Another World to you non-Americans -- and of course, Flashback. I can't tell you how many times I played these games; I was wholly obsessed with the gameplay, the style, the animations and the all around badassery -- Gun pickup cinematics? Hell yes! It was this past weekend over a conversation with my brother and a friend about the 3DO -- and people complain about a $500 PS3, psssh -- that Flashback came up, leading to one of my all-time favorite forgotten games, which I dug out of a box in the closet: Heart of Darkness for PS1. 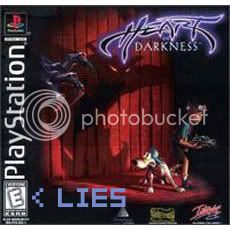 Created by Eric Chahi, the man behind Out of this World, Heart of Darkness follows the story of a young boy that just so happens to be afraid of the dark, named Andy, who sets out in a homemade spaceship -- he keeps it, along with some other rad tools, in his treehouse -- to rescue his dog, Whiskey, who was adbucted during a solar eclipse by minions of The Master of Darkness and brought to their world: The Darklands. Armed with a plasma gun and some modified collander helmet -- like Rick Moranis wore in Ghostbusters -- Andy, taking a page from Launchpad McQuack, crashes his ship and sets off on one of the most excellent adventures in video gaming this side of Bill & Ted.

Heart of Darkness took 4 years to complete, due to the extensive use of CGI FMV -- pretty primitive by today's standards -- the amazing levels and animation and the fact it was the first game to be scored by a full orchestra -- delays caused it not to be the first one released though.

The gameplay is very similar to that of Out of this World (funtip: Fumito Ueda, creator of Ico and Shadow of the Colossus, cites Out of this World as an inspiration for Ico) wherein you move from screen-to-screen and your survival depends more on puzzle solving, precise jumps and environment interaction, than actually shooting bitches in the face with a plasma gun -- think the urgency of Dragon's Lair or Space Ace in a fully interactive, platformer shell. If you watch the video of the beginning level above, you'll get a sense of the amazing artwork, details and animations, especially those of the creatures. I popped it into my PS3 last night and even by today's standards, I still think the game looks and plays fantastic. I don't remember feeling it when the game first came out, but now when the creatures are bearing down on me, trying to rend flesh from bone, there's an incredible tension and sense of dread -- it's awesome. No joke, I'm completely in love with the game all over again and wish I could have it running via a holographic display shooting from my crotch.

If you've played Out of this World and/or Flashback, you'll have a grasp on how the platformer/puzzler likes to kill you, or as I like to call it "jump, die, checkpoint, jump, die, repeat" and Heart of Darkness is no different, except for the fact you play as a child. Let me say that again, you play as a child that can die in many horrific and disturbingly detailed ways. "E for Everyone" my ass and you can take that to the bank.


In revisiting this game, I wish they made more like it nowadays. The early Oddworld games came close to the feeling, but they just weren't the same and when that series went 3D, hope was put on a sinking ship and told to kiss its own ass. As you can probably tell, Heart of Darkness was not a strong seller. This, coupled with frustration of the gaming landscape at the time, caused Eric Chahi to leave the fertile plains of game development -- probably like Judd Nelson at the end of The Breakfast Club but with an extra digit in the air. Rumor has it that Chahi recently expressed interest in working on another game, but it would be of the strategy-ish ilk. Sad faces all around on that one.

If you're feeling saucy, the game is easy to get a hold of rather cheaply at ebay and Amazon. You can even get it for Windows 95/98! Welcome to the year 2000! You've probably spent more money on full-length anime pillows or No One Can Stop Mr. Domino so there's no excuse not to check this out if you're even remotely a fan of this game's style. It's a piece of gaming brilliance, albeit a short experience, that I hope you'll want to project from your crotch someday too.
#Community
Login to vote this up!