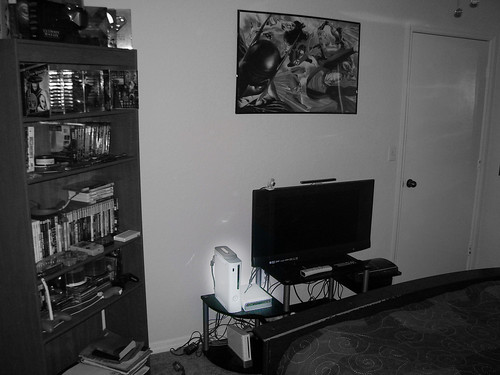 I still love you little drive

It looks like Best Buy is jumping on the bandwagon of stores who are offering their customers some type of "we're sorry you're a dumbass" consolation prize for the early adopters of HD-DVD. Today it was announced here that if you purchased a qualifying HD DVD player from Best Buy before February 23, 2008, you will be receiving a complimentary $50 Best Buy gift card. I know you�re probably asking yourself, �why would they do such a thing� and the answer is quite obvious and easy: Publicity is great and they aren�t really losing any money on this fiasco. Back in 2006, Best Buy reported a $43 million gain from used gift cards. That�s 43 million dollars of people who just didn�t use their gift cards: WTF?? You can be pretty certain that none of those people were gamers because we would use them the instance we received them, or at least put them towards a pre-order. 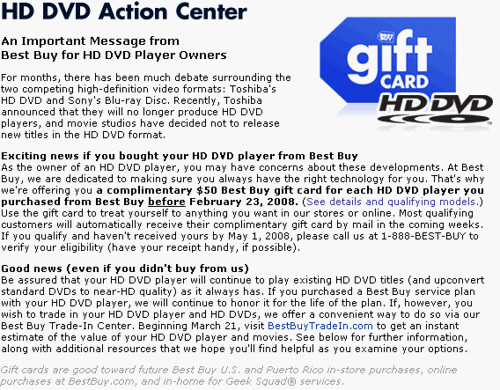 Although the format war is over, I�m still happy with my purchase simply for the fact that I can pick up HD movies for the cheap. Granted I�ll eventually run out of options with the HD-DVD format, but I have roughly 558 movies to buy on the cheap. For instance: I can either purchase American Gangster for $14.99 on regular DVD or spend 3 more bucks and have the HD version that�s plays on any drive. For someone who collects movies, it�s pretty much a win-win for me.

So what did you do during the �great� format war? Did you wait on the sideline until one had risen victorious? Or did you just become a tech whore and buy them both like I did? Also, for those who did buy the add-on or a HD DVD player, are you keeping it?
#Community
Login to vote this up!