One RPG that holds a special spot in my heart is Betrayal at Krondor [link], published for PC (DOS) in 1993 by Sierra Entertainment. 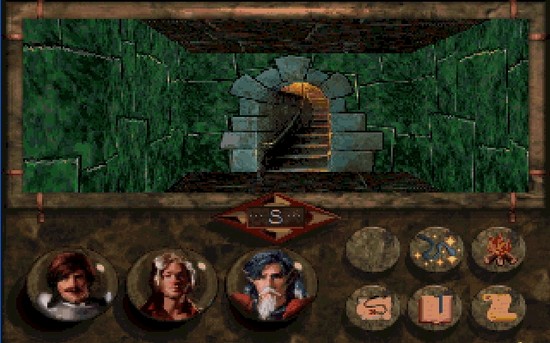 You might not know it, but sewers have more treasure and monsters than sewage.

As I go through this review, I notice a deficiency: it doesn't necessarily make you want to play the game. There are only two things I can say to further my cause, without a complete re-write.

1. The game is fun, clever, and engaging. Chalk it up to the writing input of Raymond Feist, but this is one of the least cliched RPGs I've ever played. It feels authentic. The story is deep enough to keep you playing more, just to see what will happen in the next chapter. The game also has a degree of challenge; you will die if you try to take on strong enemies too soon. Sure, there are lots of spells, magical items, and weapons, but they can't change a major fight into a cakewalk. Thankfully you don't have to grind to improve your levels.

2. IT'S FREE
Sierra made this game freeware in 1997 as a promotion for the (lame) semi-sequel Betrayal in Antara. They also patched the gamebreaking bug that forced me to start over when I had gone more than halfway through. You can download the game here.

If you want to play Betrayal at Krondor, your best bet will be to use a program called DOSBox. It's a DOS emulator that you should have if you want to play any of the old classic DOS games. You can run them full-screen or windowed, with the glorious MIDI sound that God intended.

Although this is a contest entry for ShawnKelfonne's RPG Spotlight Contest, I encourage anyone interested in a classic, literate, western-style RPG to check it out.
#Community
Login to vote this up!