3:55 PM on 03.01.2008 (server time)    0
Remember Duck Hunt? It could be coming to a 360 or a PS3 near you. On January 28th, 2008, the US Patent and Trademark Office (USPTO) issued a final office action denying Nintendo re-registration of the Duck Hunt trademark. While a final office action is not truly final because it can still be appealed, the fate of one of Nintendo's most famous trademarks is looking grim. How did this come to pass? 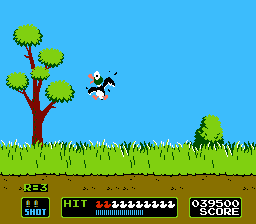 The duck is a metaphor for the trademark. Deep.

According to USPTO records, Duck Hunt's first appearance as a commercial product was on May 28, 1985. About one month later, Nintendo of America applied for a trademark, and on January 7, 1986, the USPTO approved Duck Hunt as Trademark Reg. No. 1,377,451. The trademark covered "electronic amusement game equipment having a video output display and electronic game programs and cabinet graphics sold as a unit".

On October 18, 1985, the Nintendo Entertainment System stormed North American shores, carrying a familiar cargo: the Super Mario Bros. / Duck Hunt Action Set cartridge. Duck Hunt was produced by Gunpei Yokoi, of Metroid and Game Boy fame. It was actually not the first version of Duck Hunt Yokoi had made for Nintendo. The company made a Japan-only light gun game called Duck Hunt in 1976, which used a projector and a plastic "shotgun".

Probably most of us have seen or played Duck Hunt, so I won't belabor the history lesson beyond noting that the game's inclusion in the NES Action Set led to sales of more than 27 million copies in North America.

Trademarks can't be held indefinitely; they expire unless a product bearing the mark is actively being sold. Nintendo renewed the mark for the first -- and last -- time in 1992. Further renewals would require Nintendo to provide evidence that the company was still using the Duck Hunt mark on commercial goods; no such renewals were forthcoming and the mark was abandoned. On October 14, 2006, the Duck Hunt mark was canceled not with a bang, but with a whimper.

Five months later, Nintendo once again applied to register the mark. But the story this time was different. The USPTO refused to register the Duck Hunt trademark now on the grounds that the mark was "descriptive". If trademark protection were given to words that merely describe the goods they represent, the reasoning goes, a fast-food chain could call itself "Hamburger" and sue to stop all competing uses of the word hamburger. That's not good for competition. Additionally, the fact that the USPTO previously approved this particular trademark for registration in 1986 carries little weight in the current proceeding.

Where does this leave Nintendo? Nintendo can appeal the Office's decision to the Trademark Trial and Appeals Board (TTAB) within 6 months of the January 28 denial. Nintendo will likely argue that, although the mark may be descriptive, it nonetheless has acquired distinctiveness. This means that when people hear the phrase "Duck Hunt," many of them think of Nintendo's game. The TTAB will have to weigh the popularity and recognizability of the mark against the fact that Nintendo has not attached it to a new video game in 20 years.

It's difficult to gauge how the TTAB will decide. By filing the March 2007 application, Nintendo stated that it planned to use the Duck Hunt mark in a videogame. But if Nintendo's appeal is denied, it loses its best defense against usurpers to the Duck Hunt name; although several other possible defenses exist, federal trademark protection is one of the best. Either way, the TTAB's decision paves the way for a new chapter in Duck Hunt's 20-year history. The question is: Who will be writing it?

Update: You can see the current status of the Duck Hunt trademark here, and pdf versions of the application and denial are here.

Clarification: It's been brought to my attention that trademarks granted before November 16, 1989 are valid for a period of 20 years, as opposed to the current 10-year period. This means that the original Duck Hunt trademark was good for 20 years. The 1992 filing was for stronger trademark rights, but did not extend the length of the original registration period. That's why the mark was canceled in 2006 instead of earlier.

Update 2: 3G Studios, a Nevada game developer working on an unannounced Wii game, applied for the Duck Hunt trademark in July 2006. The developer was denied for the same reasons Nintendo was denied.

3G Studios does a lot of license work, so maybe it was working on a Duck Hunt game for Nintendo. Or maybe it wanted to secure the trademark for other reasons. Whatever its motives, 3G abandoned its effort after getting denied.
#Community
Login to vote this up!