Force Monkeys Is SO Awesome.

5:43 PM on 02.29.2008 (server time)    0
In his post about video game characters who suck at their jobs, Rev. Anthony make mention of Donkey Kong's incongruous name. It was a statement that brought memories flooding back to my eyes. Memories of a comic called Force Monkeys.

Think back to the early 21st century, when GameSpy was in its heyday. The Daily Victim was riding high, crashing MMO servers and tormenting unwitting ARG players. And nestled among the assorted bits of jocular flotsam, two exceedingly righteous dudes named Sean and Sam created the most hilariously psychotic comic to ever grace the Internet. Ever. 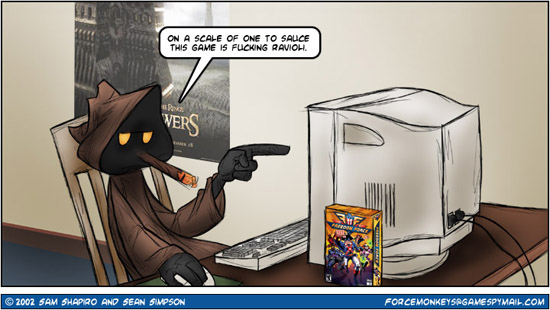 Thank you. That will be all.
#Community
Login to vote this up!