11:08 AM on 02.29.2008 (server time)    0
Usually we associate system-selling games with exclusives, not multi-platform releases. But GTA IV has potential to beat Metal Gear Solid 4 to the punch as the next title that moves PS3s. 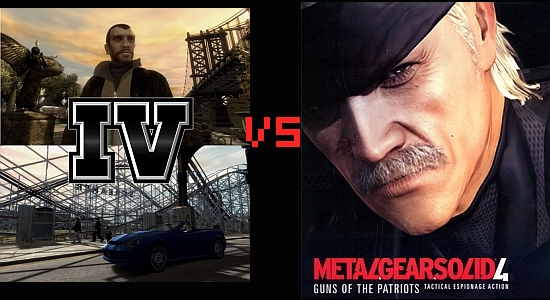 So why would GTA IV sell PS3s? The game appears to play equally well on either console. If anything, the extra downloadable content available to Xbox 360 owners would tip the scales in favor of the 360 version. And I agree with that. The trouble is, both you and I have probably already bought a console you can play GTA IV on.

WE LIVE TO WIN.

But only around 15 million people in North America own a 360 (11 million) or a PS3 (4 million). A fraction own both. Since the PS2 alone sold nearly 50 million units in North America, the market has some growth potential. The mass market probably still won't adopt at current console prices, but a significant chunk will when a major title comes out. And they don't get much more major than GTA IV.

Many regard Metal Gear Solid as a system-seller because it's an exclusive. Here are the North American sales figures for the Playstation iterations:
MGS: 2.81 million
MGS 2: 2.29 million
MGS 3: 1.42 million

For people who haven't bought a next-gen console yet, a few things probably hold true.
- They're not die-hard online gamers, but may want to try it.
- They don't play a ton of games, so game library is not a huge concern.
- Like most, they probably don't own a next-gen optical disc player.
- They may also have delayed adoption for financial reasons.

For late adopters, many of the 360's advantages -- and it certainly has some advantages -- are not key selling points. When someone finally decides to go and get a console with their tax-return money so they can play GTA IV, the employee in the store will tell them that a PS3 will upgrade both their console and their video equipment for about the same price as the competing standalone console. North American PS3 sales have been matching 360 sales since Warner's January 8 announcement to go Blu, the decisive shot causing the high-definition format wars to grind to a halt.

In some ways, the GTA series is the ultimate in casual gaming. There are millions of people who don't really play many games, but who will pick up a GTA title. Although I predict both 360 and PS3 console hardware will see sales spikes beginning in late April, I believe that PS3 will be the beneficiary of a larger share of the spike.

All numbers from vgchartz.
#Community
Login to vote this up!