Why Fallout 3 will be a bad sequel... 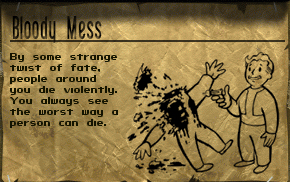 I've tried my best from refraining from discussing my disdain and disappointment with the news of the upcoming game play features in Fallout 3. I've tried to overlook all the changes that Bethesda has implemented and the old ones eliminated and tried to keep a positive attitude of "Hey, how can you screw up Fallout 3?" Sadly, there is plenty you can do and Bethesda has seemed to take all the required steps to make the most flawed sequel to a game since Deus Ex: Invisible War.

Now I know there is a decent amount of you looking forward to this game but take these points into consideration before you plan your Fallout 3 parade when the game does come out:

1. No More Turn Based: This was easily the dagger that ended in optimism for this game. The turn based, tactical combat of the Fallout universe was primarily the game play feature that made it what it was. Now Bethesda feels that the game should go real time to give it that action flavor that they feel the fans deserve.

Why is this such a bad thing? Well if you asked that then you aren't truly a fan of Fallout (In my opinion). First off, Fallout wasn't about action, it was about strategy. The proper set up of your team in the right situation could spell victory or doom. Nothing was more enjoyable than sneaking your character around the side and surprising a bunch of bandits with the pancor jackhammer and tearing them to shreads. Now it almost seems as if that element is gone and we now have to settle for run and gun mode.

Turn based mode also provides more difficult and challenging A.I. With turns, computer A.I. can analyze and compute the best way to come at you with a lot more efficiency than it would be able to in real time since, of course, the A.I. doesn't get a whole lot of time to plot and think when it is stuck in a situation. Take for example Morrowind or Oblivion, how many times have you had allies that you had to protect and they just charge blindly into an enemy? Do you want any of this to happen while you are playing Fallout? Oh and lets not forget radiant AI...


2. Saying good bye to Isometric view: Another big gripe that I have is Bethesda "Oblivion"ing Fallout when it should stay in its isometric view. Like turn based, there is no good reason why Bethesda had to do away with the isometric camera. Take Titan Quest for example, the game had really nice visuals and captured the landscape well and it did all of it in the classic Isometric view and didn't need to resort to any special 3D first person/third person view.

Just think of it as if Blizzard for some reason decided to make Diablo 3 a first person hack and slash. I know many others, including myself, would cry out against such a travesty. But Bethesda feels (and they could be right) that Oblivion graphics sell and that silly notions of "if it ain't broke don't fix it" don't need to apply.

3. Leave your brain at the door: I remember playing Fallout 2 (my first Fallout experience) and noticing how everything truly had a consequence. My first character I made was heavy on the science and speech and at first I had trouble fighting of course but I was able to bypass a lot of situations and puzzles because of this. My brother, on the otherhand, created a warrior with low intelligence and charisma. The results? His character practically spoke in grunts and short phrases. He couldn't get a good conversation out of anyone and no one gave him any sort of respect. This is what I loved about Fallout, you were rewarded for making a social, intelligent character and punished (depending on how you played) for making a character just based on physical traits.

But it doesn't seem like that will be the case in Fallout 3. Apparently the intelligence attribute will not affect your speech at all. So go ahead and drop that intelligence down to a 3 or a 2 and pump up your combat skills! Bethesda doesn't want to punish all you shoot first and ask questions later players because that wouldn't sell well.

Hold on though, what if intelligence affects some of your skills like science or bartering? Well they thought of that too apparently and have decided to *sigh* include minigames. That�s right, those awful things that gave any player a chance to pick a lock or improve a standing with someone in Oblivion are going to be in Fallout as well. So now players won't have to worry about having proper science skill to hack into a computer, as long as they can solve the minigame fast enough they won't need the required skill to do such a thing.

4. Bethesda ignoring the fans: Now this is what I found odd. According to Bethesda they are true Fallout fans and do not want to ruin the reputation of the franchise but they also feel that they know how to keep it that way and don't need any of the fans who have been making Fallout mods and playing Tactics online to this very day. Nah, Bethesda knows a whole lot better than they do.

You would think that they might have a clue but by abandoning said points above and picking the most retarded perk in the "submit a perk contest" for the game shows that they aren't truly interested in preserving Fallout but just making an action game with a Fallout theme to it. Seriously, the Grim Reapers Sprint? A power that allows you to regain all your action points after you kill someone? How could they pick such a perk with such a stupid name and a stupid affect?

And there are my points to why Bethesda is possibly going to ruin the good name of Fallout with Fallout 3. I hope I am wrong and they make an excellent sequel but by the looks of things it isn't very likely. I would give Bethesda a 45% chance of making a good game and a 9% chance of being a good Fallout sequel.

Also, I got most of my information from No Mutants Allowed which is a fan site for everything fallout.
#Community
Login to vote this up!