My thoughts on Valentine’s Day 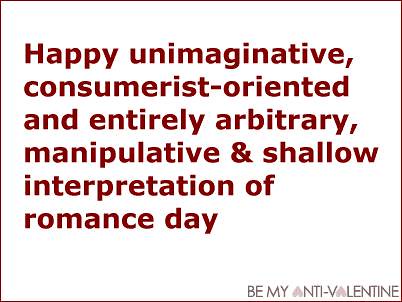 Valentine’s Day is the stupidest “Hallmark holiday” anyone could have come up with. Oh, let’s take a day out of the year to celebrate love! What kind of sappy bullshit is that? Actually, forget the sappy qualities of the day. This day just makes me realize even more how money makes the world go ’round. How many corporations (candy & card companies, along with restaurants) make millions of dollars on February 14th each year? It’s yet another example of the endless mass marketing of every semi-celebrated day out of the year. But Valentine’s Day is one of the biggest — you hear about these famed “romantic” restaurants where people reserve tables a year in advance, among all kinds of other absurd situations. (The underside of a Snapple cap once provided me with “Real Fact” #369: On Valentine’s Day, there is no charge to get married in the Empire State Building’s wedding chapel...the more you know, eh?) Corporate America has attempted (and it’s succeeding more and more each year) to equate this “holiday” with celebrations of equally abstract, yet immensely more significant concepts and events such as the birth and rebirth of Jesus (Christmas/Easter), being thankful for life (Thanksgiving), the birthday of arguably this country’s greatest civil rights leader (Martin Luther King Jr. Day), and our freedom (Memorial Day/Veterans Day). Am I saying that love is inconsequential? Hardly, though I’ve been accused of it before. My quarrel is not with celebrating love; it is with the bastardization and commercialization of that celebration. The whole thing just doesn’t make sense to me.

Wikipedia’s article on Valentine’s Day says this: “The Greeting Card Association estimates that, world-wide, approximately one billion valentine cards are sent each year, making the day the second largest card-sending holiday of the year behind Christmas. The association also estimates that women purchase approximately 85 percent of all valentines.” Yuh-huh. And there you have it.

This doesn’t represent how I feel; I’m perfectly happy being single!Oh, god...I’m living a lie...the pain is too much to bear...

I can understand doing something nice for your significant other (in fact, I’m all for it), but the idea of this holiday has formalized “doing something nice” and turned it into this huge spectacle. Now, there’s this image of what girls expect on Valentine’s Day: stuff like a nice romantic dinner, a box of chocolates, a bouquet of roses, yada, yada, yada. I mean, it’s so cookie-cutter, so ordinary, so...unspectacular. If I was a girl and I had a special someone, I’d want something special. I mean, anyone can go out and buy a $4.99 box of Russell Stover chocolates from Rite-Aid or order roses from 1-800-Flowers, and while that’s all well and good, I’d want that guy to go above and beyond. You know, surprise me...skip the flowers and truffles and get me my favorite romantic comedy on DVD or something. OK, so that’s not exactly special...now you see part of the reasons I don’t have a valentine. I think you get the idea, though...I ask people what they’re doing today, and they all say stuff like, “I’m going out to dinner with my boyfriend,” or “I’m taking her to the boardwalk,” or something along those lines. I mean, I’d like to hear someone say, “My boyfriend invited me over for some chips, some salsa, and a night of Audrey Hepburn flicks.” See, that’s at least semi-original...and because of that, it’s commendable. It shouldn’t be about how much money you spend, but how much thought you put in.

All I’m saying is this: there’s no reason not to do nice things for your girlfriend/significant other/wife/hooker on all the other 364 days of the year (or 365, as 2008 is a leap year) — this “holiday” seems to exist solely for people to spend money in ways they otherwise wouldn’t, and who ends up winning? Corporate America. Sure, some of the people end up winning as well (see: Y0j1mb0, Eschatos), and that’s great. But all in all, there really is no logical reason why anyone should be marking this day off on their calendar. Either way, if you do have someone to celebrate the day with, do something special with him/her...like playing some video games together.

In closing, I’d like to leave you with something I found on my homepage, MSN.com: the “Top ‘I Hate Love’ Songs of All Time”. Most of the songs on there are crappy, but I like a few of them. So break out your iPods and cry yourselves to sleep, friends; tomorrow is a new day, and there’s someone for everyone...right?

Disclaimer: This may just be my opinion because I don’t, you know, have a girlfriend at the moment or anything...but I suppose that’s what forms my views. At any rate, that fact shouldn’t invalidate my views or reduce their credibility at all...

P.S. Another interesting point to ponder, also courtesy of Wikipedia: according to the Roman calendar, the thirteenth of February would have been called the “ides of February.” Damn...so if Valentine’s Day was just a day earlier, it would have another name (along with, of course, Singles Awareness Day, or “SAD”) that would bring much more negative things to mind, simply because of the word “ides”...

P.P.S. Oh yeah, for all you guys tryin’ to get some tonight...remember: No glove, no love.
#Community
Login to vote this up!