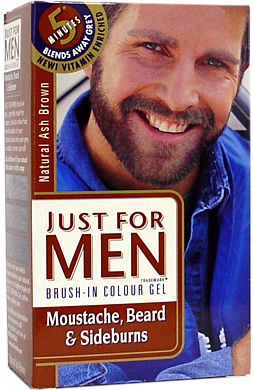 Beards are something men excel at. You know, those guys in the �Just for Men� adds that look all scruffy and hardcore. Chuck Norris would be proud. I swear, beard envy is a real thing sometimes�how much fun would it be to have a soul patch or a goatee?

As a few guys have pointed out in DVD�s post, guys are excellent at holding our purses for us, while we use our hands to shop for more purses�mwhahaa, the cycle continues!! Guys should really just carry their own purses, and I think it would just look fab.

You think we are with you for your looks? Come on, we want your dolla billz. Not all guys are sugar daddies, and you don�t have to be to make a girl happy, but it certainly doesn�t hurt, either.

Guys are good listeners�not because they actually are, but mainly because they keep their talking to a minimum and only say what is absolutely necessary. This way, they can spend their time listing to us and what we have to say, which is always more important anyway, right?

look good in a tool belt

Just look at that tool belt! It just sits perfectly on his hips. Men should always wear tool belts. It makes them extremely handy, while at the same time, makes them feel like super heroes.

I suppose this goes along with being ugly. Beards are different�I will allow it, but hair anywhere besides the head, too much!! If I wanted to date a woolly mammoth, Chewbacca would be my kinda guy. Do me a favour and get it waxed, or lasered or electrolysis or something!!

Now, see? I was pretty nice�I even had more good than bad things to say, as condescending as they might have been. *high five* Don�t leave me hanging�.who�s with me??

DJ Duffy is a self proclaimed lesbian and therefore the view expressed above may just very well be a crock of shit and completely untrue and may be slightly biased because of her orientation
#Community
Login to vote this up!

Who is the DJ? I'm not really a DJ at all to be honest. If you really want to know just ask me...its a long story. I'm a Canadian gamer who reads and writes about video games. I am just as hyped on the industry as I am on playing the games.

What games do I like? I'll try everything and anything twice.

Music is another awesome thing in my life, I've been a part of a lot of fun projects. I'm just learning guitar casually on my own time, but I played drums for about 8 years or so.

Also I work as an compositor (visual effects) in the television and film industry.

This really nice trading card that The Ghost made for me: