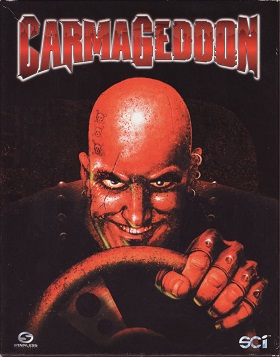 Carmageddon, it doesn't get a whole lot more violent than that. Hell even in No More Heroes you have a reason to kill and are pretty much killing "evil" people. In Carmageddon though, vehicular manslaughter is in the game not only for fun but for a means to win.

Carmageddon, for those unfamiliar with the game, was a pretend racing game. I use the word pretend because most of the time players didn't play to complete the races. Just like any racing game, you had a number of courses to go through and you won money for winning every race. But what if you sucked at racing? That�s alright, you could either destroy the enemies car demolition derby style or you *gasp* kill all the pedestrians!

And this was possibly the most fun I had on my PC when it came to senseless violence. Nothing was more satisfying than driving my vehicle into a stadium and plowing over the football team and spinning out in their blood and viscera. Want to earn some style points? Well then hit a ramp and launch your car into a pack of "peds" and get a nice instant replay of your kill.

Powerup were also available to help in your massacre of the masses. There was a lightning power up that let you electrocute cars and people in your way and (my favorite) the "jackhammer" which let you propel any object that you hit so you could go ahead and launch a pedestrian across the screen into a group of other peds. You could get very creative with your kills based on these power ups.

Like Vexed Alex said in one of his posts, this game proves that senseless video game violence does not create deviants. And this isn't like Grand Theft Auto for the PC where civilians were little top view ant people but rather crappy looking sprites that actually resembled a human being. And with all the blood and guts that came out after you smash into one of them the game got rather gruesome rather fast.

And yet I still have managed to control myself from running over civilians (even though I have to try so hard when people are dumb enough to walk in the street just because of the snow). But PC gaming was always strange like that, controversy was brought up over its games but no one ever seemed to blame the PC games for any sort of violent activities.

But I digress, the game was and still is to an extent fun. It's a great time killer for when you just want to have a good time destroying everything in your way.

Here is a Carmageddon video from Youtube showing a "highlight reel" of someones kill spree: