Stepping Your Game Up: A Guide

There exists a most exquisite theory, which can be directly applied to any gaming pursuit, a theory that will elevate your abilities above those of your peers, allowing you to become akin to the Game Master.

It's called the buffalo theory and I'll let Cliff of "Cheers" fame explain...

"Well you see, Norm, it's like this... A herd of buffalo can only move as fast as the slowest buffalo. And when the herd is hunted, it is the lowest and weakest ones at the back that are killed first. This natural selection is good for the herd as a whole, because the general speed and health of the whole group keeps improving by the regular killing of the weakest members.

In much the same way, the human brain can only operate as fast as the slowest brain cells. Now, as we know, excessive alcohol kills brain cells. But naturally, it attacks the slowest and weakest brain cells first. In this way, regular consumption of beer eliminates the weaker brain cells, making the brain a faster and more efficient machine.

And that, Norm, is why you always feel smarter after a few beers."

But GHost, you handsome, vaguely annoying brigand you, how does this relate to pwning teh n00blors (lawlz)? Well it's very simple, not only will you brain become more efficient when you consume alcohol, but your nerves begin to be inhibited too. As such, all the slowest nerves that compromise your reaction times will be affected, leaving you with superior chronic anti-life syndrome inducing powers. In other words: alcohol increases your killing power!

Now go drink a few beers first and then beat the following one after another on the hardest difficulty without cheating: Contra, Contra 4, Ikaruga, the original Punchout! and "Through The Fire And The Flames". It'll be easy, I promise. If you can't do the aforementioned tasks, then you need to keep drinking. Eventually if you drink enough, you'll win. You may just not remember it the next morning.

Now, if you'll excuse me, I have to go get ready to play some Team Fortress 2. 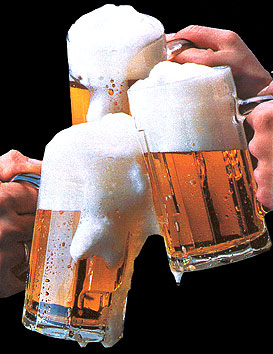