Designed and directed by a previous Capcom visionary, Tomba! was meant to be a unique game that defies description. While ostensibly being an Action-Platformer, it also included several RPG and Adventure game elements that it is closer to describe it as a 2D Legend of Zelda than anything else.

So, in effect, the game does succeed in being a unique genre-defying title, which partially explains its critical acclaim and cult-favorite status. However, in playing it years later, it has several pacing and direction issues that are difficult to ignore, and these flaws do keep it from becoming the masterpiece that it's designed to be. 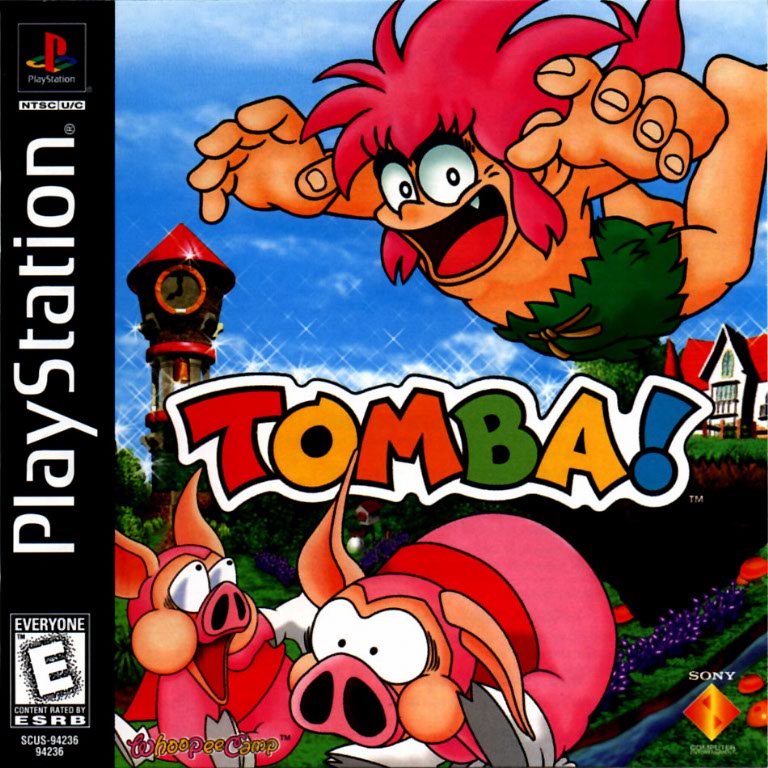 "This was once a peaceful land, until seven Evil Pigs came. They suddenly appeared and changed this land into an ugly world."

Starring the pink-haired barbarian (?) Tomba, the game immediately shows a disregard to the design conventions of the '90s with its edges and dark hues. Instead, the game's world harkens back to the '80s with some charming visuals and a sense of humor throughout.

Starting with a charming anime movie, some Evil Pig minions steal Tomba's golden bracelet, which was given to him by his late grandfather. Aiming to retrieve his stolen heirloom, Tomba instead ends up saving the land from the influence of the seven Evil Pigs.

This takes him through several areas and villages, where he interacts with an expanding cast of characters, solving both minor and major issues, which ultimately should help him find the secret location to each evil pig.  Here is where the Adventure genre influence becomes clear. Most people basically require Tomba to fetch things from some locations, and these quests are called "events" in the game. By resolving events, Tomba gets awarded with some items (which can help resolve other vents) and perks. 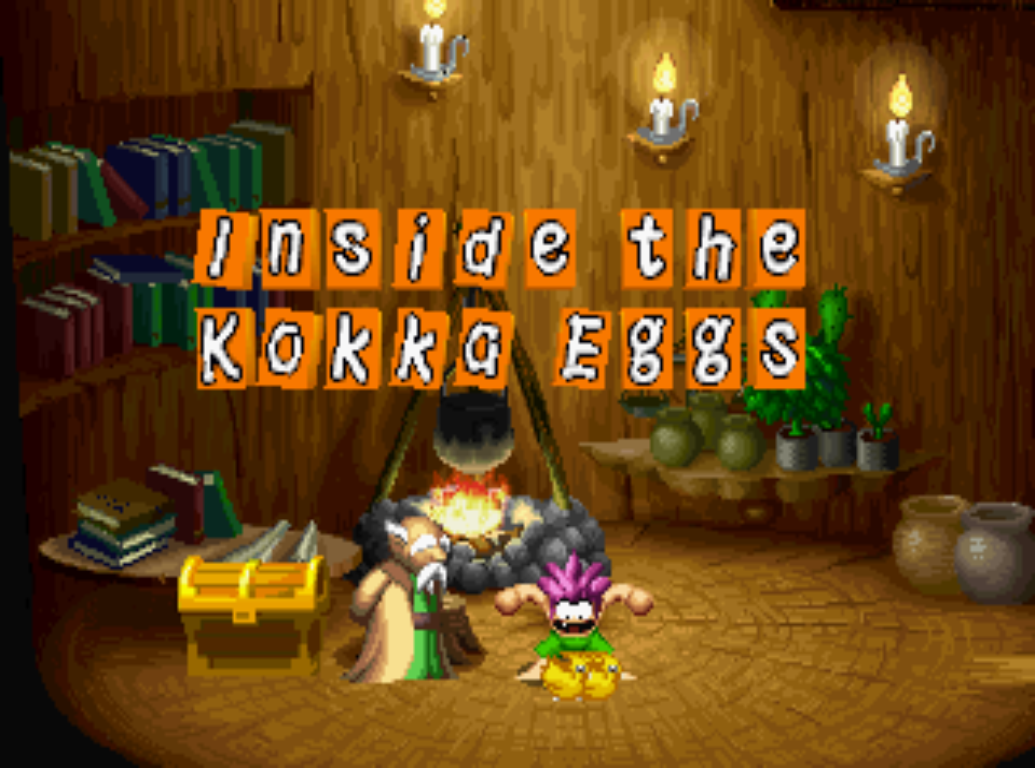 Just helping people and chicks around

What's most interesting about Tomba's adventure is seeing the influence of the Evil Pigs on the world. Since each of the seven cursed an area in the land, defeating any of them lifts the curse and changes the world accordingly. For instance, an area with severe storms suddenly becomes much calmer and easier to navigate.

As expected from the premise of the story, this is not really a complex or engaging plot. However, there is some extensive dialogue between Tomba and the many characters of the world, and a lot of it is funny, helping create a charming world.

"Be careful... You must not underestimate the power of the Evil Pigs"

The game's visionary director is Tokuro Fujiwara, who is most famous for his work on the Ghosts 'n Goblins franchise, and you can see a lot of Arthur's in the way Tomba moves. While not nearly as rigid and unforgiving as the movement in G'nG, there is still a lot of momentum to consider when you are jumping around.

As for his attacking moves, Tomba needs to deal with his enemies dually. First, he must stun them with one of his extending weapons of choice (whips, boomerangs, chains), and then he can jump on them and throw them around. When throwing enemies, you can throw them at other enemies to defeat them immediately. It's worth noting that several enemies can be jumped on and thrown without needing to stun them. 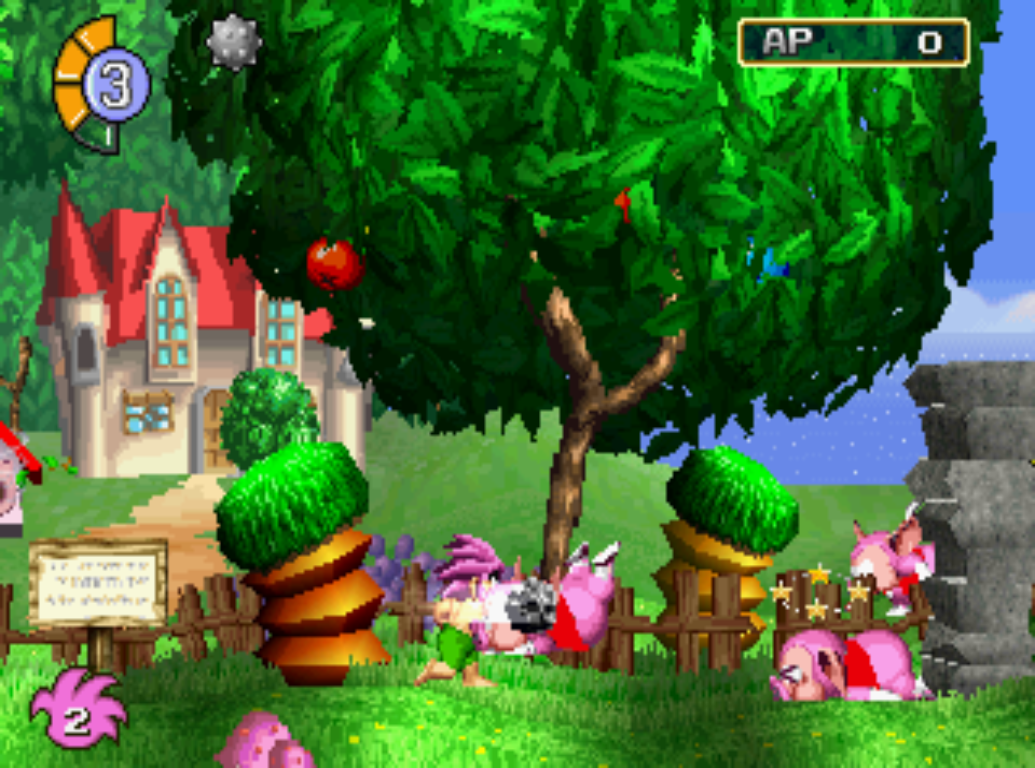 In fact, I found that I only used my weapon rarely, and at that, only against some specific kinds of enemies. Even against bosses, sometimes it's easier to jump into them than to attempt to stun them first. That's because they are only stunned for a short amount of time, and you can still fluff the jump and get hit by their unreliable hitbox.

This reflects the general movement and mechanics of the game. While Tomba's omentum and attacking options theoretically encourage continuous movement and action, similar to Namco's Klonoa game, jumping into enemies often feels unprecise and the main melee attack forces a full stop whenever you use it. Boss battles compound these issues because they require a near-perfect jump and throw into a moving target, which ruins what are otherwise some interesting battles.

"I can see it in your eyes... You will become stronger. Just don't lose courage"

Outside of combat, Tomba is consistently fun to move, especially as you later equip him with a parasol for gliding and also gain the ability to swim. This partially alleviates the constant amount of backtracking you will need to do throughout the game.

As mentioned earlier, the main thrust of the game is clearing the many "events" it gives you, which in turn unlocks more events to clear. These range from finding a Banana and feeding it to a hungry monkey to a multi-part romp through the entire island stepping on "pumping rocks". Many of these side quests are quite cryptic, both in their description and their solution. For instance, a thief losses his bag and you find it for him in the same area, but the quest continues and he loses his bag again but in a completely different and undisclosed location. 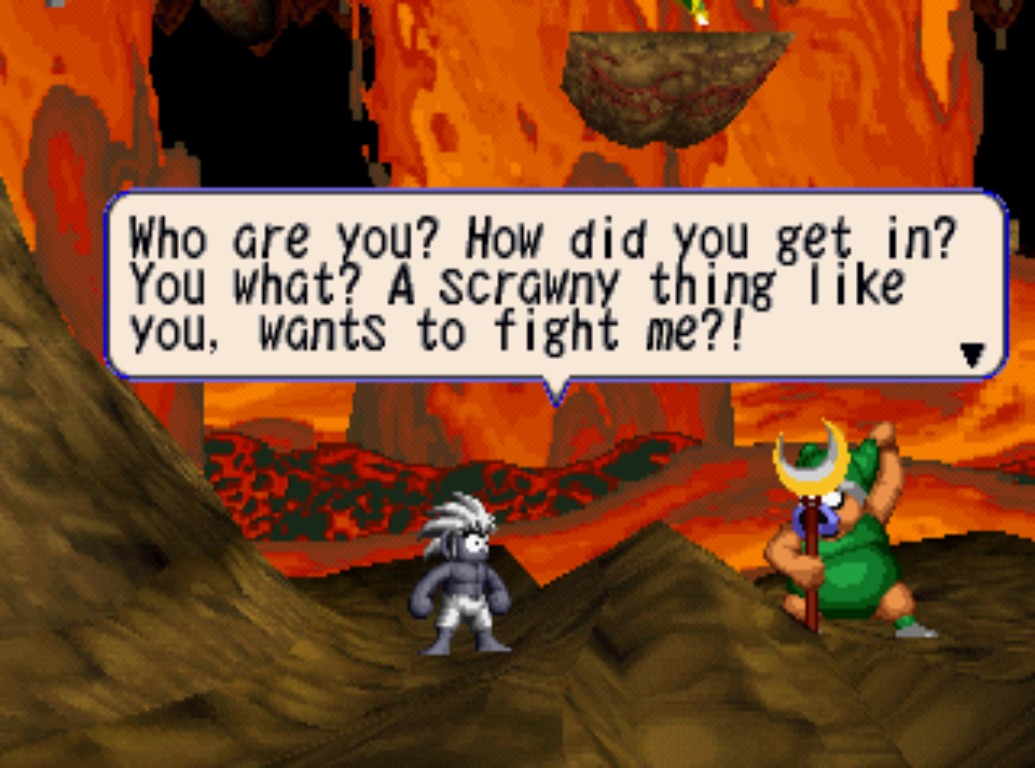 What's more confusing are the conditions to start these events, which often depends on finishing other pre-requisite events. Frustratingly, this means that some items that can resolve some of these quests only appear when you officially log them in. That's the case for defeating the seven Evil Pigs, where you need to acquire a certain item that allows the portal to their boss battles to appear in the world. As you can imagine, this means you don't know where that portal is until you get the key item, which will require you to search all over for that elusive portal whereas a locked door would have been apparent at any time you pass through it with or without a key.

So, the game's most innovative feature becomes extremely annoying without a guide to support you, at least that's the case if you are aiming to finish the game quickly and with as few repetitions as possible. However, this system does have a unique charm if you are willing to just hang out and uncover things at your leisure. There are always new events, and just walking around can become rewarding as you find new things in the areas you revisit.

"Now take yourself and your funky hair out of my sight! My storms create havoc for everyone!!"

As hoped by the exciting opening animation and unique art design, the game's graphics manages to capture that style in a way that maximizes the abilities of the PS1 3D graphical abilities while still maintaining an objectively good look.

Set in a 2.5D world, the game's world is a combination of 3D polygonal objects like Donkey Kong Country and impressive 2D backgrounds. With its expressive characters and uniformly good design, the game manages to look good and memorable. 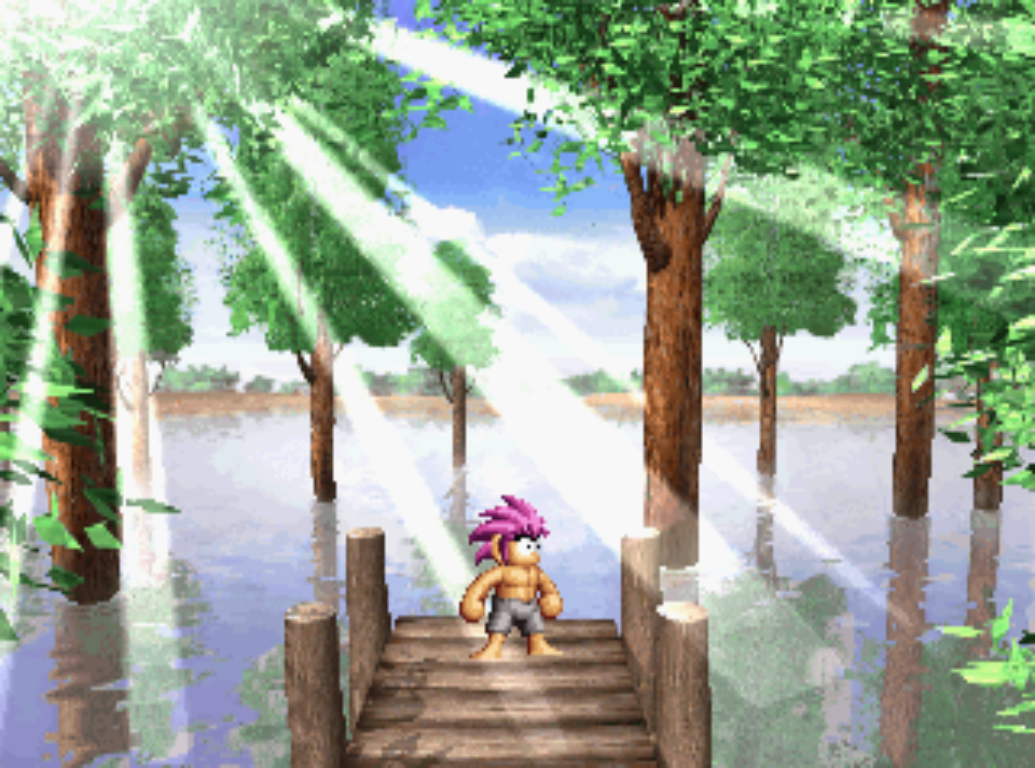 Interestingly, the game uses its 3D graphics really well by adding in both foreground and background layers you can jump into, as well s some levels where you completely change the perspective by "flipping" the stage and rotating the playing plane around a landmark.

Unfortunately, while the graphical style is consistently good and fits the world and characters, the equally fitting soundtrack is perhaps too apt for the title. As a result, its tracks feel similar to each other, repetitive (especially considering the amount of backtracking), and are not as fun to listen to.

As with a few of the good tracks, I feel some of the tunes needed to have more ambiance to them rather than hit you over the head with how weird and wacky the world is.

I feel like I complained more about the game than I initially intended to, and that's because I really liked what it was going for. Tomba over really well, and other than some annoying hitbox issues, I felt the game's core mechanics to be really solid. Especially when in service to a genre-defying game, where there was a lot of promise to the concept of "events" and a labyrinthian adventure game.

However, flaws in its mechanical execution, as well as the cryptic drip-feed of events and lack of signposting meant the game just had too much backtracking to be consistently fun, which I seriously hope was fixed in the sequel.

Tomba! had the potential of becoming a masterpiece. I hope the sequel managed to fulfill that potential. 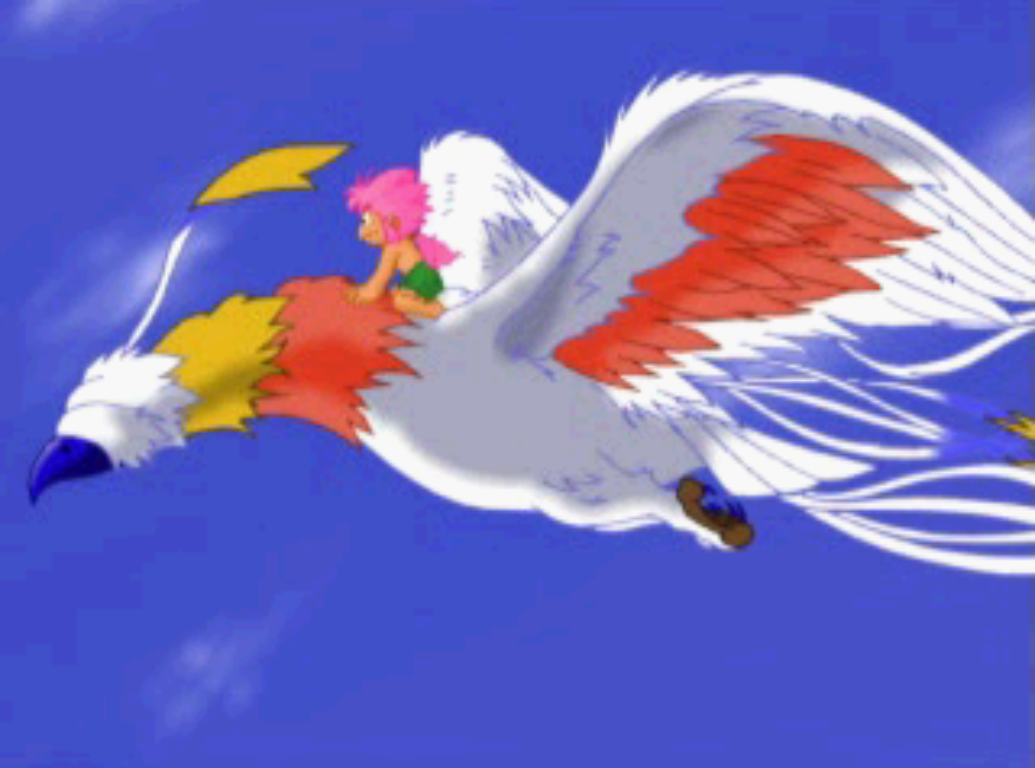 1-Unlock the fast-travel dog as soon as you can.
2-Use a guide for an easier time. Otherwise, keep a pen and paper ready to record your observations whenever you encounter an event.
3-Early on, you can use charity wings to teleport from area to area.
4-Equipping the parasol helps you navigate some of the more dangerous platforming situations.
5-Throwing colored enemies around grants you the exp that you need to unlock some of the stronger power-ups in the game. 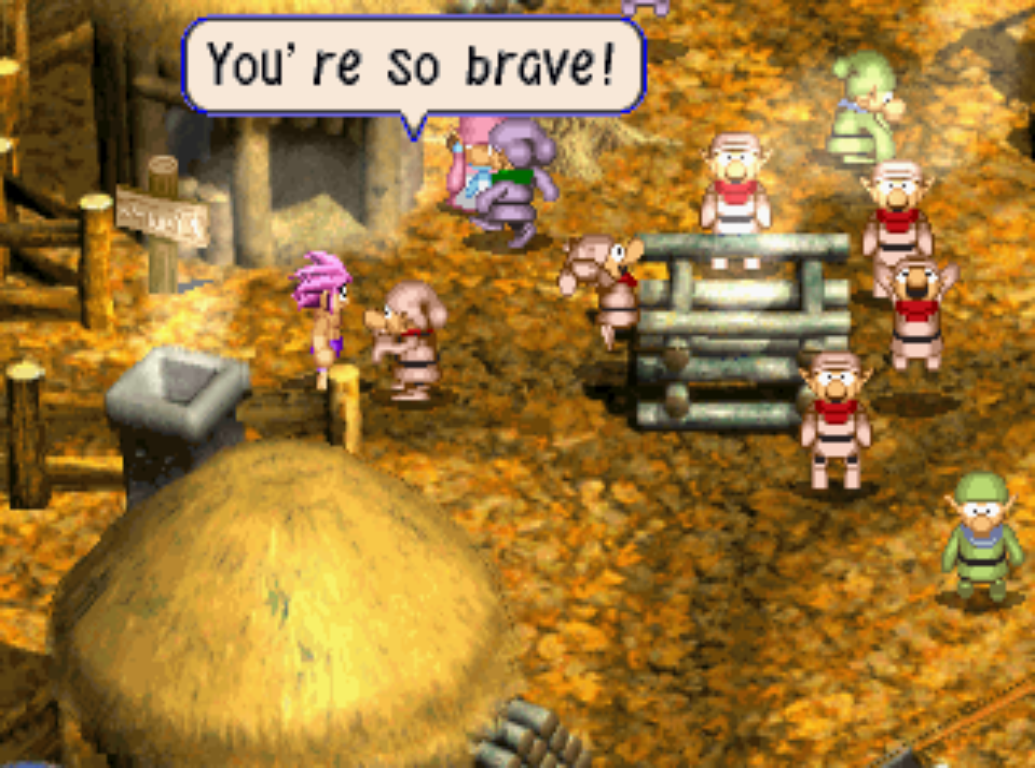 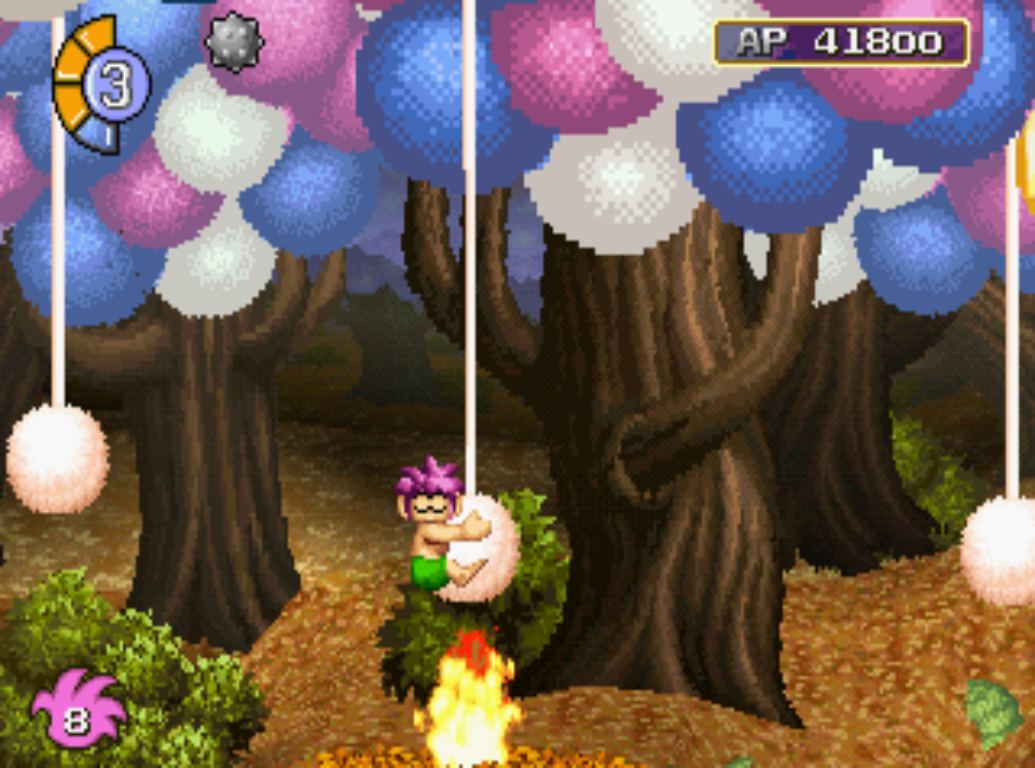 Despite having some cool ideas, the first Tomba! game did not meet my expectations for it. But it had enough promise that I am really excited to start its sequel, which is considered a much-improved game. It's the sequel that is ranked at #59 in the Retro Sanctuary list, and it will be my next review.