Ain't life funny sometimes? Evidently, someone decided that letting me go wasn't a particularly cost-effective way to manage their video content, so here I am once again. I'm currently finishing up some new gameplay videos for N+ (the site is going live in a few weeks), and the time is nigh to begin capturing footage for the big console franchises.

As part of the restructuring, Infogrames has driven a wedge between Atari, Inc. and Atari Interactive (the holding company for our intellectual property), shifting all production responsibilities to Interactive and leaving Inc. with just marketing and distribution. The end result is that I'm now one of the only people left at Inc. who knows how to beat a finicky devkit into submission.

So in order to work on the PS3 build of DBZ: Whateverthefuckwe'recallingitnow, I needed a PS3 devkit. I dug one out of the sub-basement where it's been lurking ever since the relocation of our Santa Clara office, hoisted the 50-lb slab of metal out of its box, and embarked on a journey of self-discovery through SCEA's developer support. 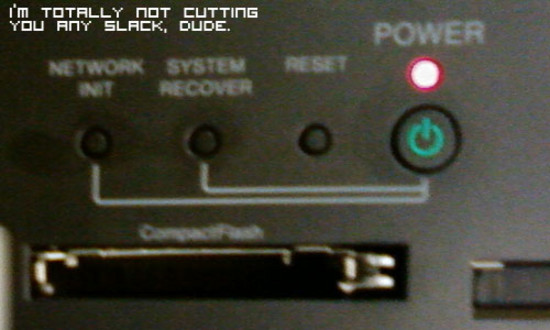 Our PS3 devkit gives me the Sony equivalent of the middle finger.

To make a long story short(er), a PS3 debug has three different kinds of firmware, two of which have to be updated via Ethernet from a host computer before the finicky bugger even gives you video output. I was halfway through the second update when the power light flashed red, the beast locked up, and two hours later an email to Sony's developer support revealed that the machine is so old that the new firmware won't even install on it. It's a year overdue to be exchanged for a new unit, and until that happens I am the proud custodian of a $20,000 doorstop. Sloppy inventory management FTL.

So yeah, uhh, Sony? Listen, props on the tech support, really, but I still think you need to address your debugging architecture. If a drunken business development analyst can set up a 360 debug in ten minutes during a Christmas party, do I really need a degree in electrical engineering just to turn your product on? I honestly think developers would get better results if they didn't constantly need tech support for the most mundane crap.

Long post is long, I know. My bad.
#Community
Login to vote this up!