What I learned from playing every Kingdom Hearts game

The thing is, I don’t really care about Disney movies. The only Final Fantasy game I’ve played through is, somehow, Tactics. I am not the target audience for Kingdom Hearts. And yet, as an adult man, I have now played them all. It has happened. There seems to be little choice but to write down some thoughts. I considered writing a paragraph or so on every game, but immediately realised that I was too lazy for that. So what I have instead are three general talking points - three things that stand out to me when I look back on the series as a whole. I hope you enjoy them.

(Some spoilers, I guess.) 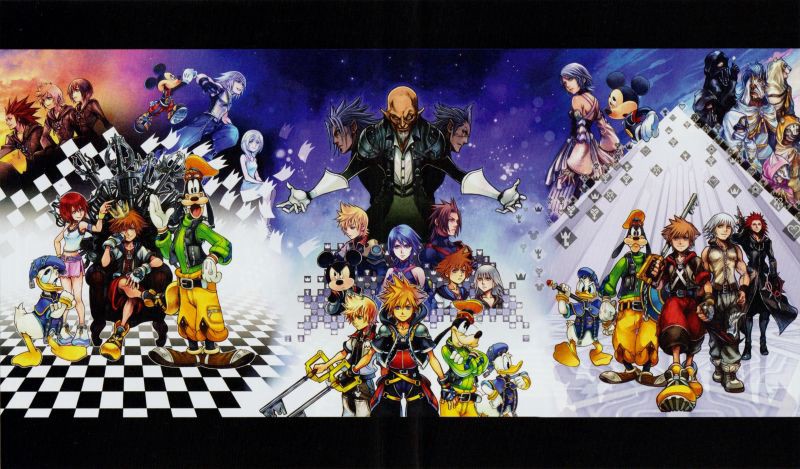 So, I have a theory about game trilogies. It goes like this:

Game 1 shows up and sets the scene. It’s normally a little shaky, a little incomplete, a little safe. But if it’s still a good game then there’ll be a sequel.

Game 2 is the big winner, the moment where the series finds its identity and doubles down on it. This is the flow state, ambitious and capable in equal measure.

Game 3 is objectively good, but disappointing. It is overburdened, needing to both build on and live up to its predecessor – to say nothing of having to wrap up the storyline in a way that will reward the fans for their investment. This may also be the point at which more cooks enter and spoil the broth.

Anyway, if we look at the main three Kingdom Hearts games as a trilogy within the franchise, then it basically applies.

The first Kingdom Hearts isn’t exactly a case of humble beginnings. It’s a handshake between two giants, after all. Not a shred of humility between them. But for as big of a deal as the Final Fantasy-meets-Disney premise may seem, the game itself is relatively tame. It’s the shape of a good PS2-era action RPG, with a backdrop of popular Disney elements. The true Kingdom Hearts doesn’t start here.

Kingdom Hearts II, however, is the quintessential experience. This is where the series finds its swagger, its trademark style both in gameplay and narrative terms. Those are certainly distinctive: the flamboyant, floaty-yet-snappy combat. The blend of Disney content and series originals, woven through with threads of Final Fantasy DNA. The storyline that drives off a cliff, hopelessly drunk on a cocktail of theme words, shōnen tropes and melodrama played out among an ever-expanding cast. KHII has a lot going on, but the sum of it is possibly the best single representation of the franchise to this day.

As for III, well… it is, in many senses, the most polished and playable entry in the series. But it can be difficult to enjoy it in that capacity when you see just how much it is trying to juggle, and just how much it’s struggling with that. It has to both end a story that had gotten totally out of hand, and ensure its continuation. It has to give a place and a moment to every character it can, despite the fact that many of them don’t have any sensible reason to feature and may not even be recognized by the average player. It still has to take Sora through a tour of selected Disney worlds, even though all of its narrative concerns lie with the franchises’ original characters and locations. It feels like for every ball it catches, it has no choice but to drop one. And when expectations are this high, the audience is unlikely to be sympathetic.

The lesson: It’s tough to be the main event. Not a lot of franchises have the discipline or the perceived freedom to let their showstoppers breathe and be themselves. If you want to avoid disappointment, it may be best to manage your expectations. You’re probably not going to get some numinous moment of completion out of the deal, and if you do then you certainly don’t need to expect it in order to enjoy it. I think it’s best to expect game number three to be what it so often is: a sloppy party where everybody shows up, you have fun, and you may well end up feeling nauseous and empty the next day. 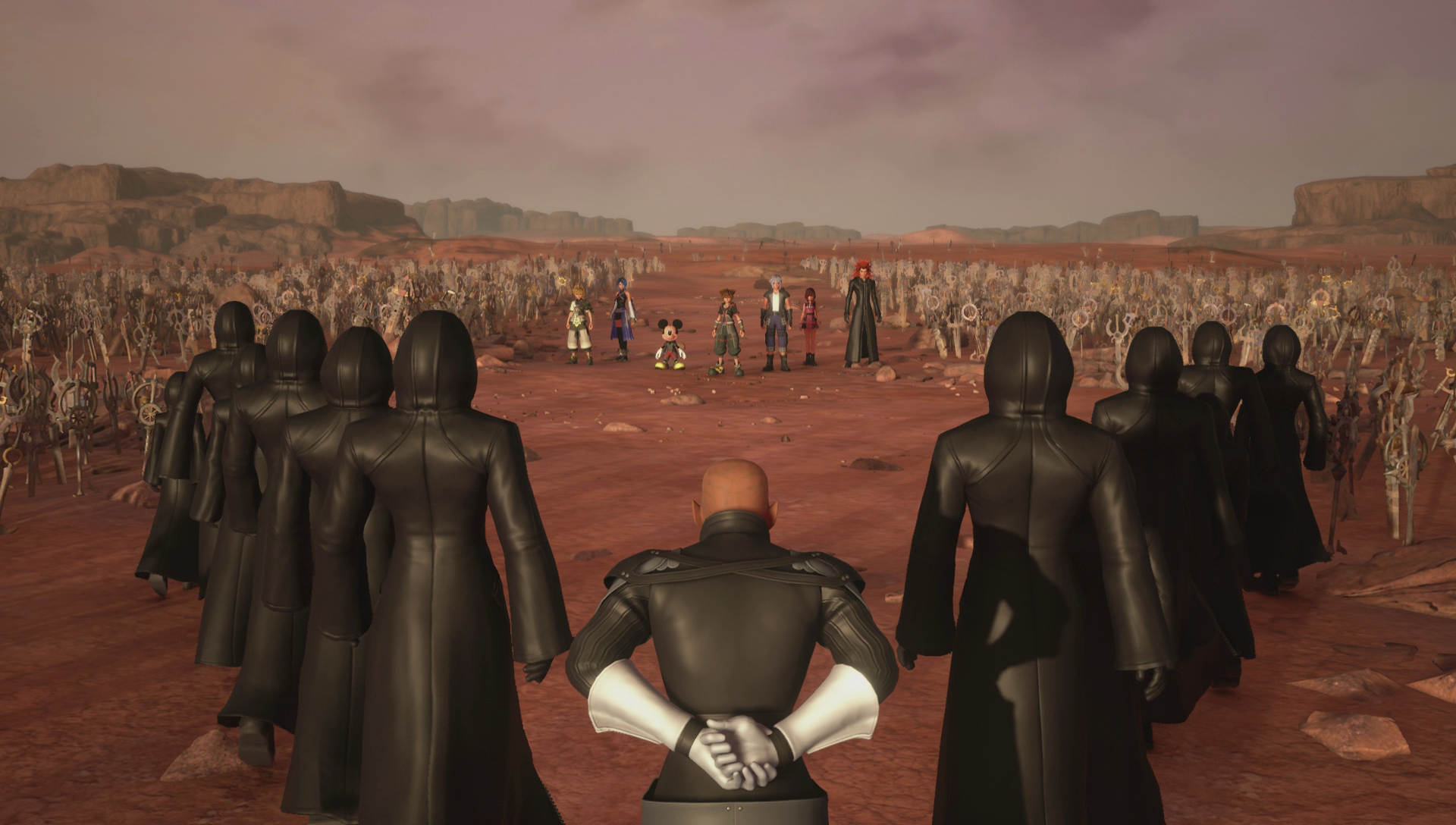 It’s common knowledge that Kingdom Hearts has a side-game problem. The 14-year gap between II and III was defined by it, after all: by this compulsion to release smaller games on (physically) smaller platforms. Fans watched on, powerless to help as 358/2 Days and Dream Drop Distance found their way into the world while III apparently couldn’t. To say nothing of the mobile game(s), which I will confess I haven’t touched. There are limits.

But there’s a deeper problem. This isn’t just about the number of side games, it’s about their nature. In Kingdom Hearts, everything is canon. The rhythm game is canon. The gacha game is canon. And if you miss one, you’re all but guaranteed to be boxed out of a scene somewhere down the line as punishment for your ignorance. Kingdom Hearts III is where all those chickens come home to roost, of course. It feels like Birth by Sleep is an absolute prerequisite for making heads or tails of III, with the other non-numbered games all being vitally important for at least a scene or two to boot. Likewise, I’m sure Kingdom Hearts II would have been even more jarring of a narrative leap from the first game for somebody who hadn’t played Chain of Memories in the meantime.

That’s absurd. Chain of Memories is, on the face of it, a rehash of the first game but with cards. It sounds like the most skippable thing in the world. But it actually introduced a whole host of characters and concepts that were immediately necessary to understand the next entry. This is an act so unreasonable that even Metal Gear knew better than to do it (both AC!D games were non-canon). God of War knows that you may not have played Chains of Olympus or Ghost of Sparta. Halo knows that you probably skipped ODST. Kingdom Hearts? Kingdom Hearts doesn’t give a fuck. Kingdom Hearts is the kind of series that will end a landmark title with a bunch of characters from the mobile game showing up and just expect you to be OK with that. It has no respect for the sanctity of the spin-off.

There is, however, one noble exception. It would be unfair not to mention it: Kingdom Hearts Re:coded. That’s a game that gets it. A game that is knowingly unimportant, knowingly gimmicky, and not very good. As close to a pure spin-off as the series has come.

The lesson: Side games are like extended family. If I’m at a family gathering (and I’ll admit that perhaps this simile only comes to mind because I tend to avoid them), there shouldn’t be the expectation that I know what all my cousins have been doing since I saw them last. I can ask them. They can tell me. It’s important for your franchise that players understand which games are their siblings, which are their cousins, and which are their estranged great-uncles. 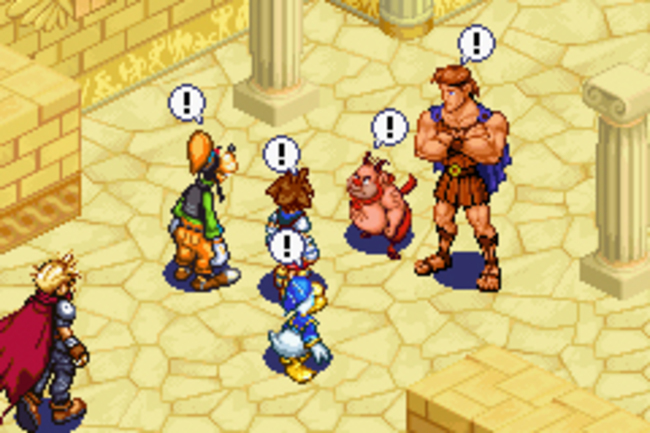 Much has been made of Kingdom Hearts’ story, and for good reason. It’s nonsense. Complete, reckless shithousery. That’s not to knock it. That’s just what it is.

I have seen this claim disputed (well, not verbatim). I can even see where the objection is coming from. For any given scene in Kingdom Hearts, an expert observer will be able to say who is there, what they are doing, and why. That’s a story, right? Of course it is. Kingdom Hearts may be infamous for making things difficult on that front (there are a lot of doppelgängers), but it does technically give you all the information you need.

The real trouble with Kingdom Hearts is in the cement between scenes, in the rules. To put it simply, there aren’t any. There seems to be little to no internal consensus on what can be done and when, on what any given phenomenon or piece of jargon actually means in this world. Salient information constantly transforms or disappears, making everything seem arbitrary. There’s a feeling almost of being cheated: that the effort it took to follow however many speeches about hearts, darkness and nobodies has been betrayed.

At some point, however, something clicked. I stopped trying to fight it, to wrestle it into something logical. It stopped being about the storyline and started being about the characters. For as ridiculous as it gets, Kingdom Hearts holds on to a surprisingly convincing and varied emotional core. It hits all the small notes between whimsy and wistfulness, and all the big ones between triumph and tragedy. Once I stopped worrying about the specifics of whatever mess was occurring and surrendered to the feeling of it, I found myself enjoying the story on its own terms. This did require some conscious filtering on my part – there’s still a lot of gibberish to fend off. But overall I was surprised by how much better everything worked once I accepted what kind of rewards this story had to offer and what kind of mindset was best-placed to receive them.

The lesson: A game, once made, is inflexible. But we don’t have to be! When you play a game, you’re entering into a dialogue with it. Part of the responsibility for that conversation lies with you. If you want it to be pleasant and edifying, then you may well have to be the one to take the initiative – to find the game's wavelength and meet it there if you can. It’s an inanimate object, after all. It can't come to you. 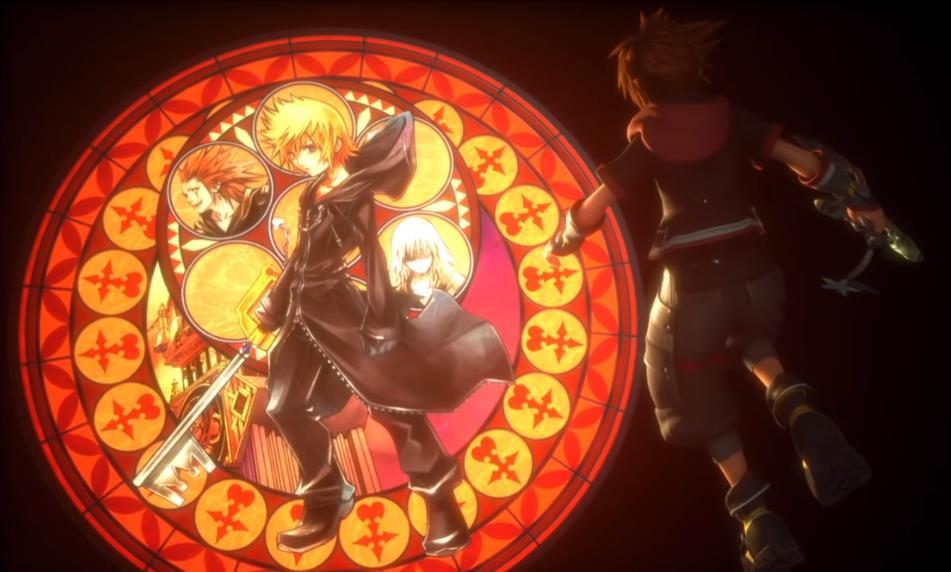 And that’s that. In the end, I really enjoyed committing to a (near) full franchise playthrough of something so unfamiliar. It’s a big investment, but the process definitely draws something out that an equally-sized assortment of good and/or better titles can’t. More ways to enjoy games, I suppose. And we’re all in the market for that. I started out with no idea that there was something called Kingdom Hearts Re:coded, and I ended up with a reason to appreciate it. That’s a win. I don’t know if it’s more of a win than just playing something good, but that seems almost beside the point. It’s different, and different is worth something.