Man I'm spending a lot of time on here lately. I guess I've kinda missed writing these things. That or it's the drugs I'm taking for this cold. I guess getting vaccinated made me a little carefree. I forgot to Lysol my body when I got home after a coworker called out sick for strep.

That's also probably why I'm nostalgic to write here. You guys are like a beautiful exgirlfriend and I just can't delete your number out of my phone.

So, summer is coming up which means I'm trying to figure out what to do with the kid. Last summer I taught her how to code (as best as I could at least). So I figure it's time to dust off the old laptop and see what we can craft together. Over the past year we haven't made much progress, what with the holidays and the winter storm ruining the house. This summer I figured I should try to expand on what we learned last year.

That's when I stumbled upon Chris Carter's little article where Sonic's media manager gave a limp thumbs up for fan projects. I showed the post to the kid and said "How about we make a Sonic the Hedgehog game." This of course was met with glee and excitement. Doing a bit of research I saw that this is Sonic's 30th anniversary and I figured why not try and make this an event. So I set up a game jam in the hopes that other people might join in and have a good time. Really though it's so I could put some pressure on myself to do this right and finish something.

I've been in a slump creatively. I'm burnt out on my other game which was supposed to be an homage to mecha shows of the 70s with a bit of the 1920s/30s retrofuturism thrown in. That might sound cooler than what I'm actually doing with it now that I reread that. I'm hoping that a game jam sorta pulls me out of it, and so far I've got 3000 lines of code thanks to some expired Dayquil. I'll wait for the jam to really get started and figure out what to do with it, but at least I have a framework set up.

Not sure if the jam will get any support or not. A part of me wants it to be a smash hit and then another part of me remembers what the fanbase for Sonic can be like and I start to hesitate. Not kink shaming, it's just I kinda grew up on Sonic the Comic or the Archie stuff as a kid (alongside the games) so my expectation leans towards Betty and Veronica levels of controversy.

Still even if nobody signs up there will be 2 new Sonic games out on or before the speedster's birthday. Whether they'll be good or not, we shall see. If you're a Sonic fan, you already know that coin toss. 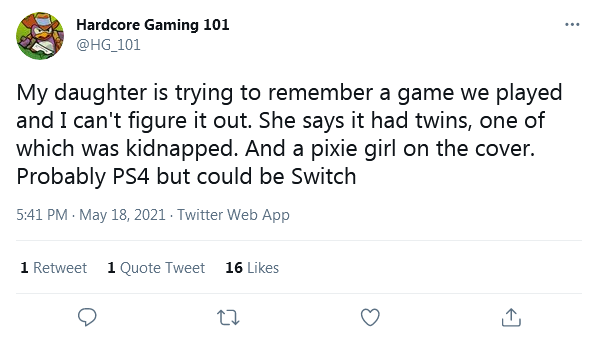 So I'm not usually on Twitter because well, it's Twitter. However I wanted to try and promote the jam which thanks to a like and retweet from Xzyliac, I think I've done my job in spreading the message. In my twitter travels I happened to stumble upon what must be the most gaming parent tweet ever. This is a tweet from Hardcore Gaming 101's official account asking for help in figuring out a video game for their daughter.

That site (if you don't already know) is basically a love letter/compendium for video games of all shapes and sizes (catering to the obscure). Even those guys had to ask the internet to help out and decode what ever it is this little girl is trying to figure out. I dunno, I just feel it's ironic (not totally sure I know what that word means) but also extremely human.

Apparently the game wasn't The Giana Sisters, Shantae, or Fatal Frame II. The internet is only so helpful I guess.

Hopefully by the next time we meet, I'll have a game for you guys to tear apart. I was hoping I could get away with doing a Sonic and the Freedom Fighters story like I grew up with, but I'm a bit murky on whether Antoine Depardieu is Sega's or Archie's or what. Some good ideas are being left on the table sadly.

If you have some free time coming up, sign up for the jam. If you don't then I hope you'll swing by later to check these games out. To the die hard ride or die fans looking for a fix, sound off in the comments about what you like best in a Sonic game. It might be a part of my game.

That was me panhandling for ideas. Lord knows I have very little talent or ability to realize them, but the possibility is there and if there is one thing Sonic fans have deep inside them, it's faith in the possibility that it might turn out well.