This time, I'll tell you about a game where the player has to take photos of youkai to defeat them.

I thought of trying to make you believe I'm talking about Project Zero, but no, can't do that. There are some similarities, though -- you defeat the enemies by taking photos of them, your camera is your only way of defending yourself, and that is very, very, very slow to reload.

But instead of people trying to ward off ghosts with the Camera Obscura, we got a photographer trying to get close to the enemies to take pictures worth a lot of points. Not Frank West either, but Aya. Shameimaru Aya, a tengu in Gensokyo, and the main character of 9.5th Touhou Project: Shoot the Bullet (Team Shanghai Alice, 2005).

(See? It's not just Squenix who have strange numbering in their games.) 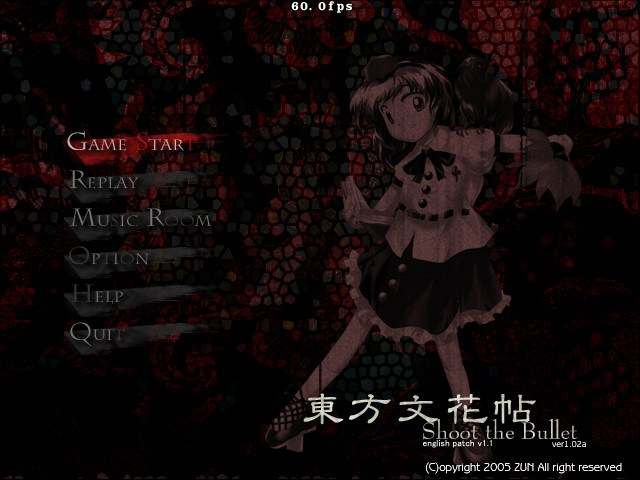 Title screen with the English fan patch. Now that I think about this, this would actually suit a horror game with the running vertical black lines...

You'd think danmaku and taking photos are rather hard to mix together, but maybe not so; danmaku bullet patterns are often designed with aesthetics in mind. Given how the player is now lacking the ability to fire their own bullets and the fire button is now used to take a shot with the camera, it's not too complicated.  Although, I still took the in-game screenshot during a recorded replay...

The gameplay, then. Aya has to dodge the bullets and get close enough to the enemy to take a photo of them, then fall back to wait for the camera to reload for the next shot. Each scene is against one Touhou character whowill throw increasingly complex bullet patterns at the player as the player takes more shots up to a scene-specific limit. The photos are scored with various criteria, such as bullet colours, self-insert, and timing, not much unlike how Project Zero has certain moments you can take a photo for increased damage.

There are no bombs to clear off the enemy shots either when the player is in a pickle, but taking a photo will erase all the bullets within the frame. A different definition of photobombing, maybe.

Unlike the main series Touhou titles, Shoot the Bullet has only boss fights. No waves of popcorn enemies to pace the action a bit, which doesn't really cater for long gaming sessions in my opinion. On the upside, each scene can be tackled individually. 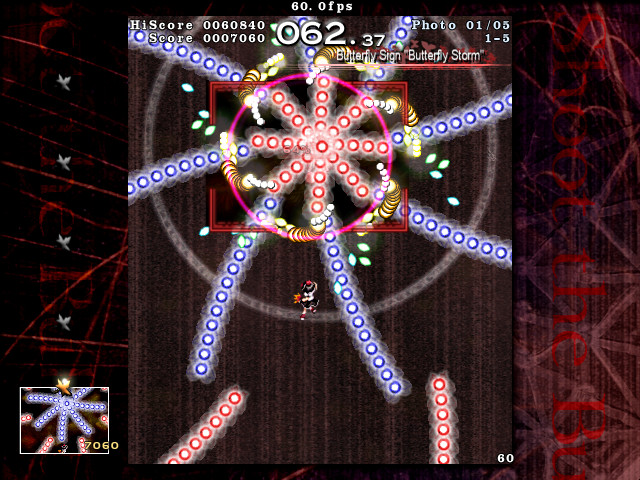 About to take the second photo in scene 1-5. Screenshot taken from my replay. Five shots about the enemy (Wriggle Nightbug) has to be taken to win the scene.

As I said, this is a Touhou title by Team Shanghai Alice. That means:

There's an English fan patch for the game, and to get it to run on Windows 10 without window borders, it'll need an extra piece of software. Maybe because of this, this game is not available on Steam. Its follow-up, Double Spoiler, however is... but I can't get it to run on my PC for some reason.

The music and the art, if you're a Touhou fan, you know if you like them. 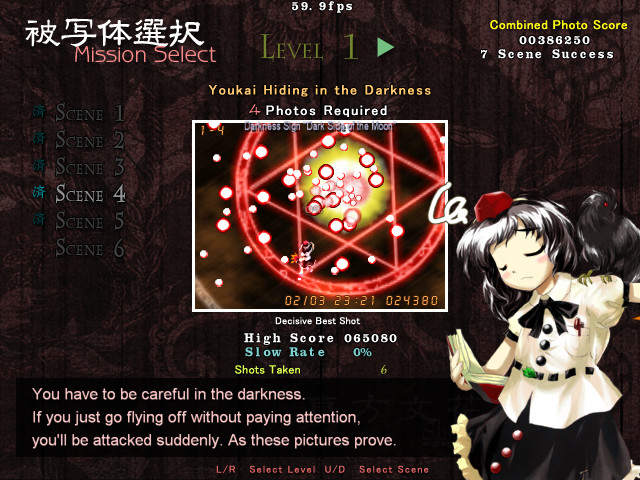 The difficulty, though, has no workaround that I know of. Unlike regular Touhou games, Shoot the Bullet has no difficulty adjustment options. Scenes also have to be finished without getting hit even once, and the difficulty keeps on increasing. While I can understand the lack of difficulty options -- those would mean designing more boss bullet patterns -- extra levels of difficulty wouldn't need to use all new attack patterns. Having no lives system helps only so far.

If you're as poor a player as I am, you may be satisfied just watching it played by pingval in Summer Games Done Quick 2020 Online.

I got this game first when I decided to give Touhou games a proper shot. My greatest achievement on that front is 1CC'ing Perfect Cherry Blossom on normal difficulty... and I think I could barely get to try the scenes in level 6 of Shoot the Bullet. The difficulty level here is a real issue for many, and I'd be hesitant to recommend it to people who don't have a considerable skill set in danmaku already.

So there you have it, an unlikely combination of paparazzi-ish simulation and danmaku. It's different, and not bad. But definitely not for everyone or beginners.

(I would've taken a photo of the physical release here, but I hate how reflective the jewel case shows too much of the surroundings.)