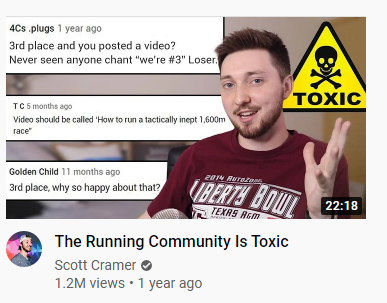 My goodness! The Running community is toxic? Say it aint so! Needless to say, I laughed pretty hard at this.

Admittedly, I haven't watched this video. I have no idea what this guy says about the running community but I imagine it's all the same stuff you hear about every other community someone lables as toxic. You can see in his thumbnail some screenshots of "toxic" comments. Just people putting down other people, you know, the usual.

People being people on the internet is toxic, there, are we done now? Do we need to drive this point home any further? People with the power of anonymity are always going to be hurtful, or do things they would never do if you were standing in the room with them.

Is this right? No. Am I excusing it? No. What I'm doing is pointing it out. I think it's helpful if people have an awareness of this kind of thing. I see so often youtube creators or people on twitch let the "haters" if you will, get to them, drag them down, cause them immense depression. No one deserves that. Not everyone can compartmentalize the idea that everything is toxic so you should just ignore this kind of reaction. But...you should try is what I'm getting at.

People aren't going to change until there are consequences. That's what "cancel culture" has developed so strongly. It's consequences for people who think they can just get away with whatever they want. Freedom of speech does not save you from consequence. Also, being silenced by a private company like youtube or twitter does not infringe on your freedom of speech either. If the government silenced you, then it would. That's the difference.

The moral of all of this is, of course, be nicer to each other out there. It's a small world, a short life, and you only get one of them. That person you insulted, they also only get one so don't make theirs any more miserable than it needs to be.