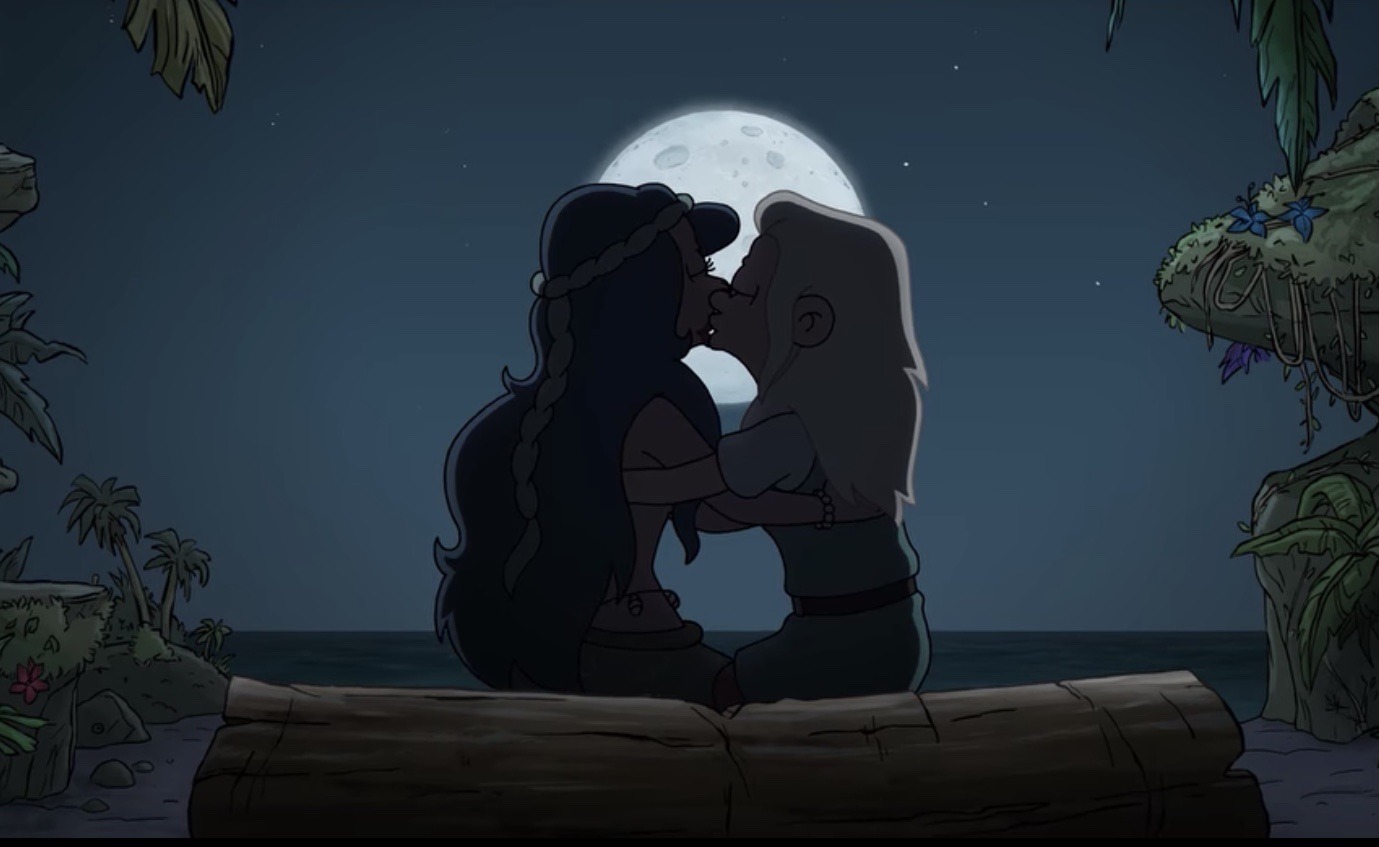 Mora is a mermaid. When she is first introduced working at a Freak Show, she is nothing more than a sassy background character. But as our heroine (not to be confused with the drug) Princess Tiabeanie Mariabeanie de la Rochambeau Grunkwitz and her loyal friend Elfo make their escape, they free all the other inhabitants of the exhibition including Mora - who makes her way back into the ocean after tail-slapping Elfo.

Mora would soon after return on the steamboat named Miss Adventure that Bean and Elfo use to escape. (The Miss Adventure also becomes Elfo's next lover.) While wasting time together talking and lounging on the bow, Mora and Bean would form a bond and a romantic flame would be lit. But to Bean's dismay, she wakes up one morning after a fantastic night looking at the stars to find that Mora is not beside her. In fact, she is nowhere on the boat.

The vessel eventually makes it to land face-first, and the crash sends Bean overboard and she is knocked out by hitting her head on a stone down below. Elfo leaves to find help. While he is gone Mora returns to find Bean and takes her on an ocean adventure and straight to Mermaid Island, where Bean meets the family and parties. The two settle down on a beach log, Mora gives Bean a necklace, the mermaid plays a song, and the two make love out of sight behind some driftwood.

Bean wakes back up on the beach, her head still laying on the stone that knocked her out. Dismayed that the best thing to ever happen to her was a dream, she leaves with Elfo who has returned at this point. Miss Adventure also sinks. Both of them have lost something dear.

This is the most relatable thing to happen in season Three. I can relate to Bean on a spiritual level because she's a rambling drunk who's life is constantly spiraling out of control, but this fleeting happiness is on another plateau. Who hasn't woken from a dream that was so good that it ruined reality. It's not a quick kick to the groin, but a slow and painful, bleeding wound that can drag on for weeks and months.

But as the pair walks away, a necklace washes ashore. This is a writing mistake. 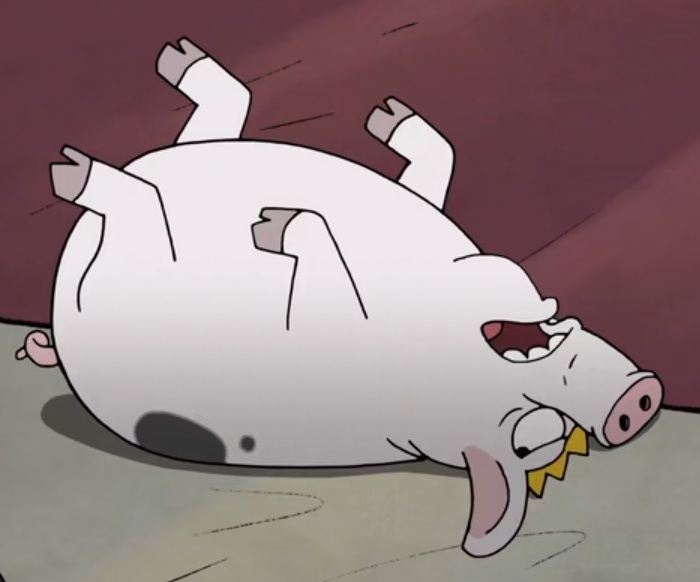 If you want to roll with the animation top-dogs these days, you have to learn how to use foreshadowing. Think BoJack Horseman and Rick & Morty, which have cult followings not just because they feature offbeat protagonists, but the writers often plant the seeds of the plot early on. That's what us neckbeards and legbeards want. It makes us feel smart. We can turn to our pillows and say "Heh, did you catch that?", "Remember back in episode two...?", "We don't talk enough anymore."

Matt Groening treats foreshadowing like a squirrel treats nuts. He leaves little story elements behind, forgets about them, comes across them one day, and then remembers he should do something about them before next season.

And when he does use foreshadowing it's not some subtle thing. It's a steam blimp-sized thing. The necklace mentioned earlier is very noticeable and in your face. The writing team saying "Hey! She'll be back!". And I'm all for having a lesbian princess getting married to a lesbian mermaid - that's awesome, representation and all that good stuff - but it takes so much away from that scene. Just let it be a dream. Instead, I'm sure, there's going to be some plot armor, wordy exposition and flashbacks that explain exactly what happened in that moment.

Groening is the product of a different time. When Simpsons came out...um...in like, 1989 or something, it was pretty different than the norm on television. Here is a Super Eyepatch Wolf video on that. Groening busted through the limits of pop culture with a creative pen that wrote "I will make the content I want, standards be damned!" But something important happened when the Simpsons broke the rules, in time it would become the standard: Matt Groening was no longer the name of a man, but a style of comedic animation. And that style - that was so fresh back then -  doesn't taste nearly as good thirty years later. Viewers want foreshadowing, and that's harder to get right in some of these older episodic cartoon formats. They were designed for prime time television where each episode was a contained story, and episodes could be mixed and matched. You could start with Simpsons episode 42 and end with episode 21 if you wanted. These newer cartoons have streaming in mind, there is a certain expectation they will be binged, which forces writers to continue where they left off. Each episode is tied to the previous one up until Le End.

So it's not surprising that the Disenchantment episodes that are better, tend to be the ones that are formatted more like a Futurama episode. When I watch the Simpsons or Futurama, I notice there's a hub for all the characters to interact in. In the Simpsons it's the pink family home, in Futurama it's the Planet Express Inc. building. The story of Disenchantment has one too, and it's the Dreamland Castle. So you'd think the structure of a season would be bouncing back and forth between Dreamland and the "new discovered kingdom", and you'd be semi-correct. But here's the kicker: the focus of all three seasons lean heavily on Dreamland and less on any of the other kingdoms. You only get a taste of Steamland, the Underground Trog tunnels, Hell or Brentwood at a time, and these seasons could be better structured if there was more of a focus outside of Dreamland. The story returns to Steamland (The plot is so bouncy!) so often it could have probably been it's own season, and the other Kingdoms could have their own seasons too. You really want to explore these mystical lands, see what makes them tick. But the storyboard of Disenchantment is like a Dungeons and Dragons campaign that was rushed to the end because there's no more bagel bites in the freezer.

And no story in Disenchantment is more neglected than Maru. By the end of Season One, Bean is reunited with her wicked mother and taken to this place called Maru: a land of sandstone and dark magic. Going into Season Two, I figured we would be exploring this unholy city, it probably could have been most of Season Two and I would have been fine with that. I think in actuality, though, it was around for an episode or two. That's it, gone. It hasn't come back yet.

And that's my biggest gripe about this cartoon. It feels like it wants to be both a show written for streaming and a throwback to the good ol' days. It doesn't succeed at either, and one thing brings down the other. It hyper focuses on one thing, and has no focus in other departments. It's hard where it needs to be light, and light where it needs to be hard. There's no right answer to making this balance work. I can't tell you how to make Disenchantment good, but I can tell you there's something wrong. And maybe that's not fair because there's only like three writers on the show, but that's showbiz, baby.

There is a lot of good clay to work with here. The characters are unique, the art style is still a pleasure to look at, I like the colors,  the voice actors are all awesome with a mix of new and familiar. But it is disappointing how this clay is molded.

My personal feeling is that Disenchantment is the Star Wars Sequel Trilogy of Matt Groening's cartoons. And if that's wrong to say, I'll see you in heck. 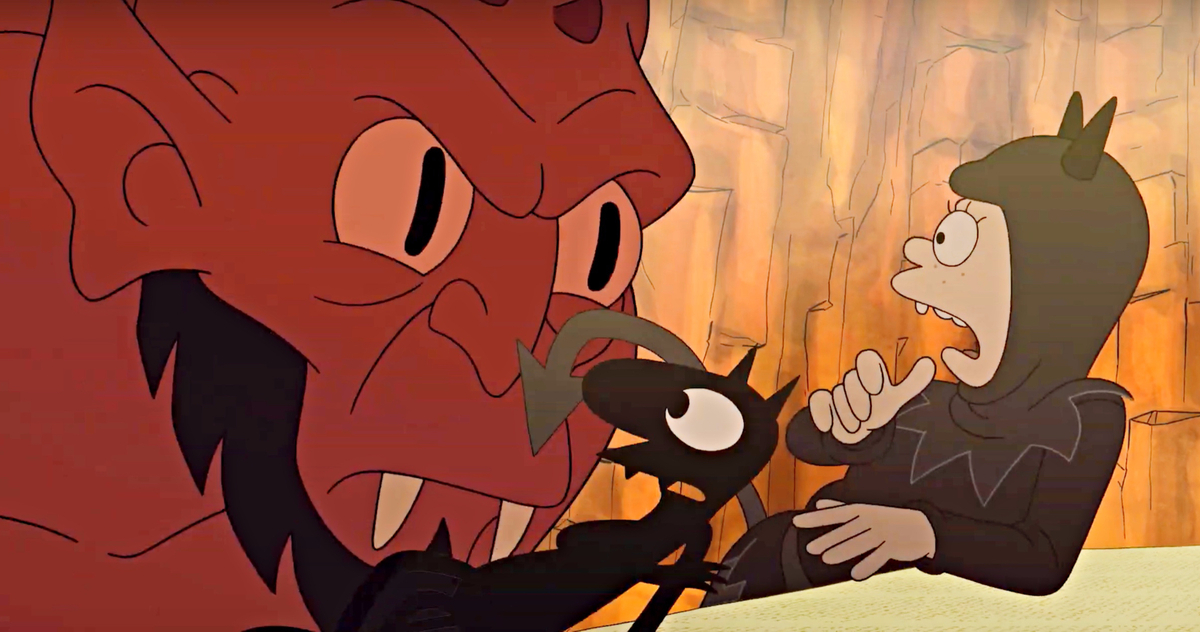