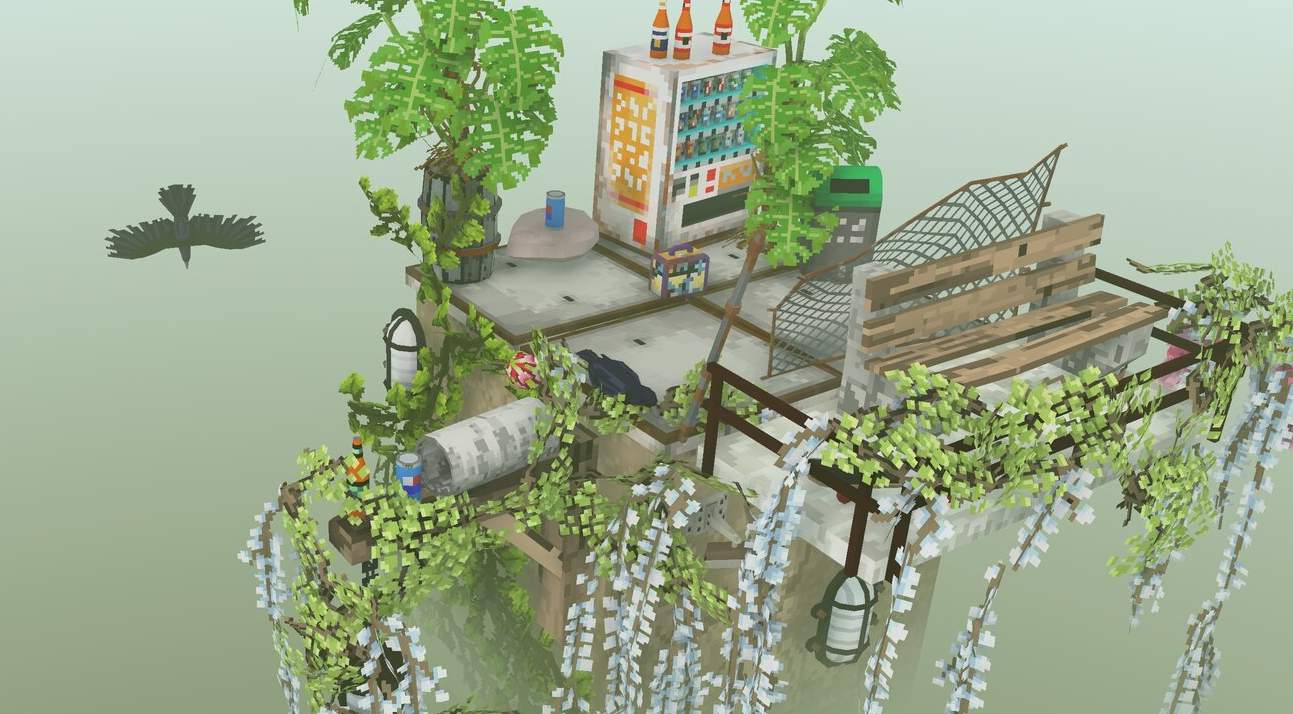 Last September, there was a new indie game released on pc with overwhelmingly positive reviews in steam and many other platforms, this game is 'Cloud Garden'.

Cloud Garden is an indie simulation game developed and published by Noio Games. The main goal of this game is very simple, just plant more trees, but the setting is in a post-apocalyptic world. The game will let use try to cover all the structures and objects on each level with 12 different plants. To grow these plants, we have to place a given object near the plant, then the plant will grow. Then, when some plant grows enough, it will give us a seed which we can take and use to grow a new plant in a different position.

While its gameplay looks very casual and easy, the atmosphere of the game including background music, lighting, ambient, and crows that fly around will make us feel more engaged in its scenario. It gives me a feeling of calm and relaxing, a happiness and peace in solitude. 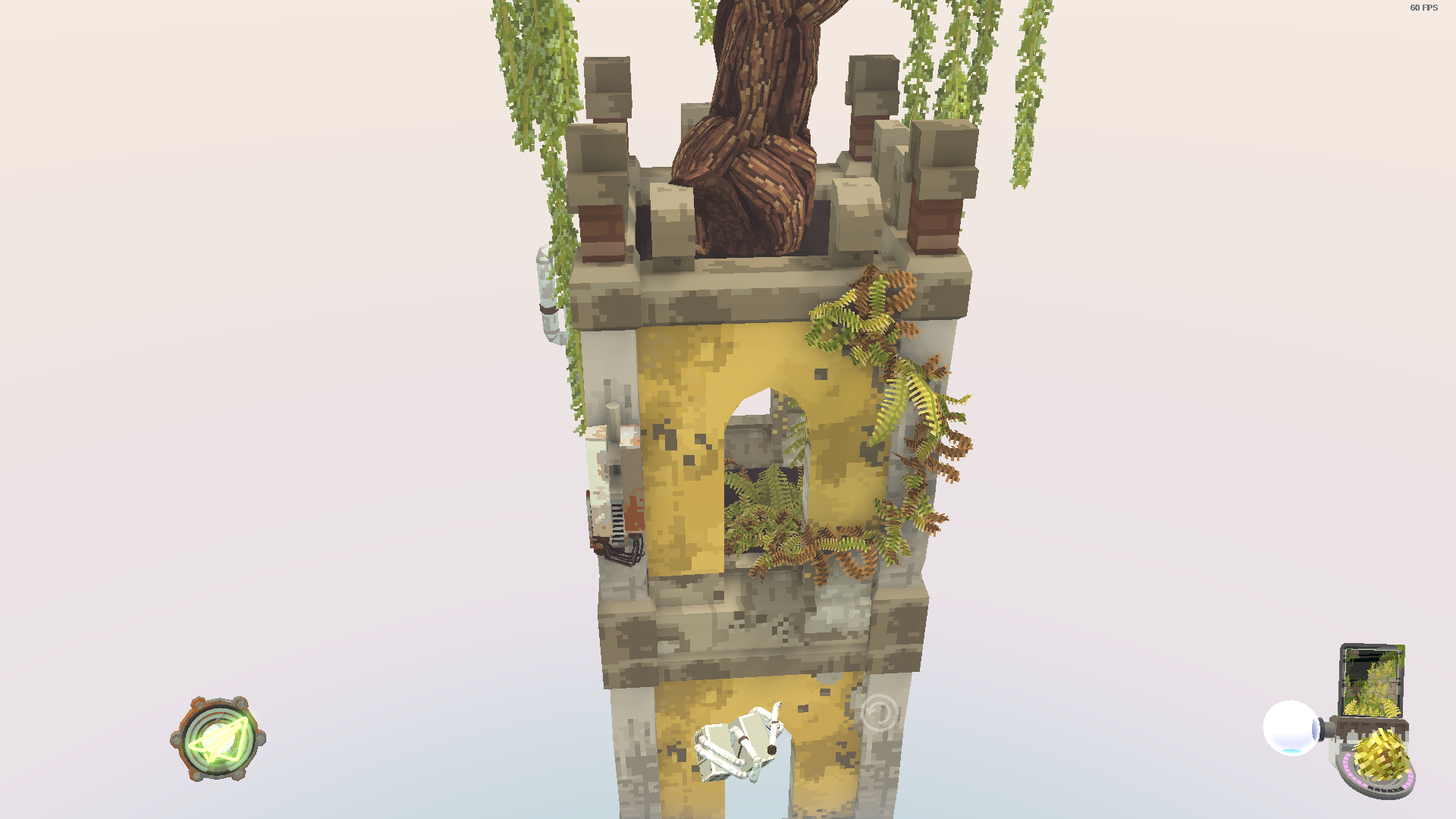 This game uses pixel art style to create its post apocalypse world. Every object looks like it comes from an old game in pixel period, but overall this game looks really aesthetic in its own way. The texture quality and details might not be as good as other games these days, but it is still able to distinctively illustrate rusted objects and texture of each material.

On each level, we will have limited area to cover it with plant. At some level, we will start from a small space, then that space will expand into a bigger area, and then show us some large aesthetic structure or ruined building at the end of the scene. Each level have it own arrangement of objects and material, which make me me feel like I am traveling through this world by myself. With those different arrangements, it really creates an area that somehow has its own  story. 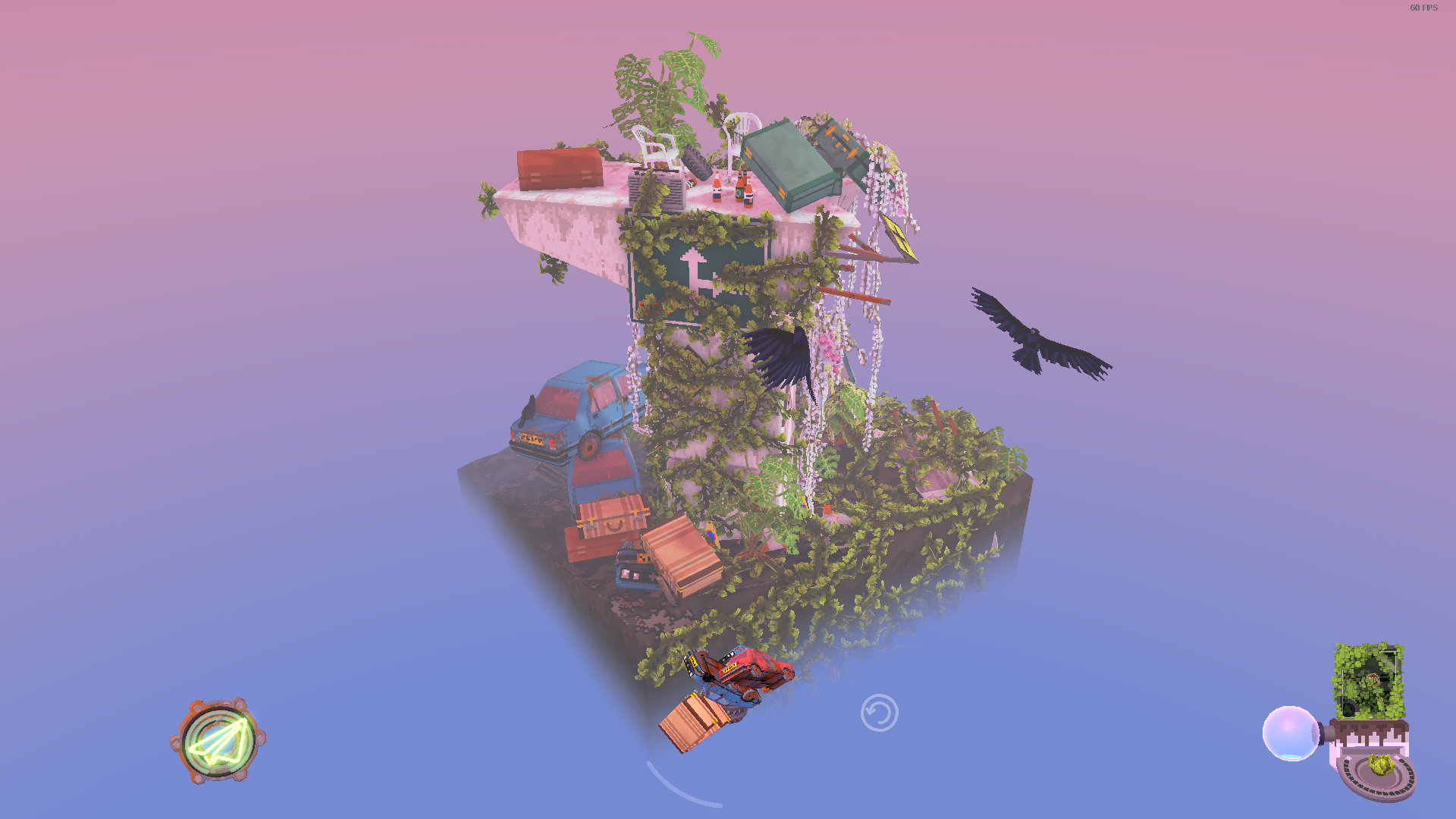 And as I mentioned previously, an atmosphere of this game will consist of 2 or 3 crows flying or standing around the scene. If we drop a seed or object near them, they will be frightened and fly away to another position. This function makes me feel alive, even though it has only 3 crows that move around the scene. I don't really know the purpose of these crows but it is one of the remarkable components that will be mentioned in almost all other positive reviews.

When I played this game for the very first time, it cost me to spend 3 hours straight. From my view. The art direction of this game really attracts me and somehow convinces me to want to live inside its world.

This game also have sandbox mode that let us build our own scene, which is my favorite part of the game.

But everythings has both positive and negative sides. 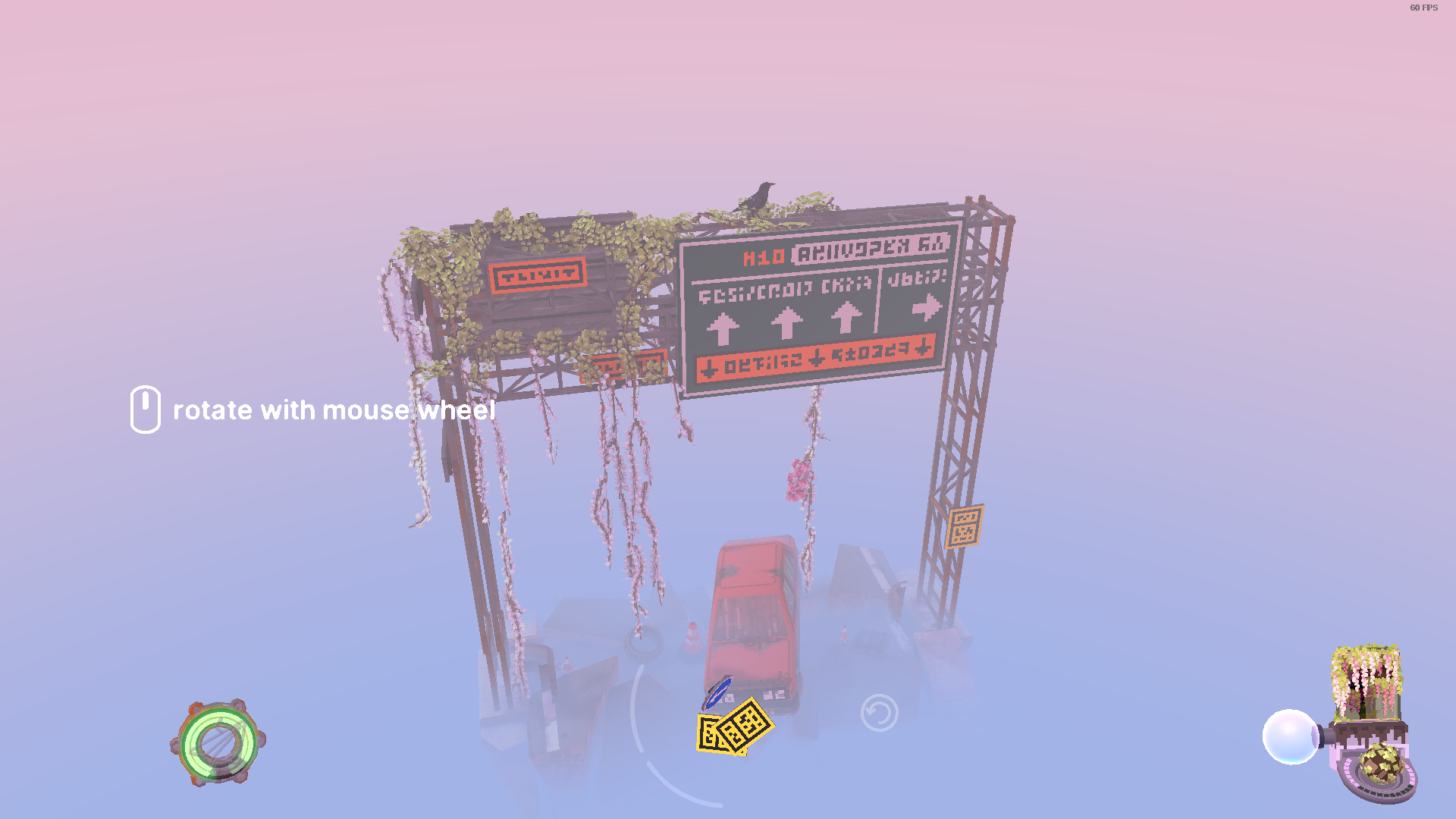 First disadvantage of this game is its tutorial. I saw many reviews that complained about its tutorial that were quite not understandable, and I have to admit that too. At the start, it will ask us only to “Collect this seed”, “place the seed here”, "rotate with mousewheel", or “ place an object here”, then the plant will grow as I mention. It might clearly demonstrate the mechanics of this game but some people need more text explanation too. For me this is not a big problem but there are many people that stuck with this process.

Another thing that I have to mention is the gameover situation. At some point, some object will be ineffective to plant near them, the plant won’t grow as it normally does when we place objects near them. Sometimes when I find this situation, it forces me to restart the level, and sometimes I have to restart too many times which makes me bored. I don’t know if this is a bug of the game or if the developer intentionally made this obstacle because there is no more text explanation other than three phrases I have mentioned.

And in sandbox mode, I think everyone who has played this game would have problems building their own structure and architecture. In the main game, we saw many beautiful buildings like a brick tower or glass house. But in sandbox mode, when I want to build a similar building, we don’t know how to construct that building with objects I have. Maybe because there is no tutorial about construction so I didn’t fully understand the mechanics of construction in this game so I don’t know how to assemble things properly.

So I think this will be much better if there is an option to open text explanations about each process and tutorial. 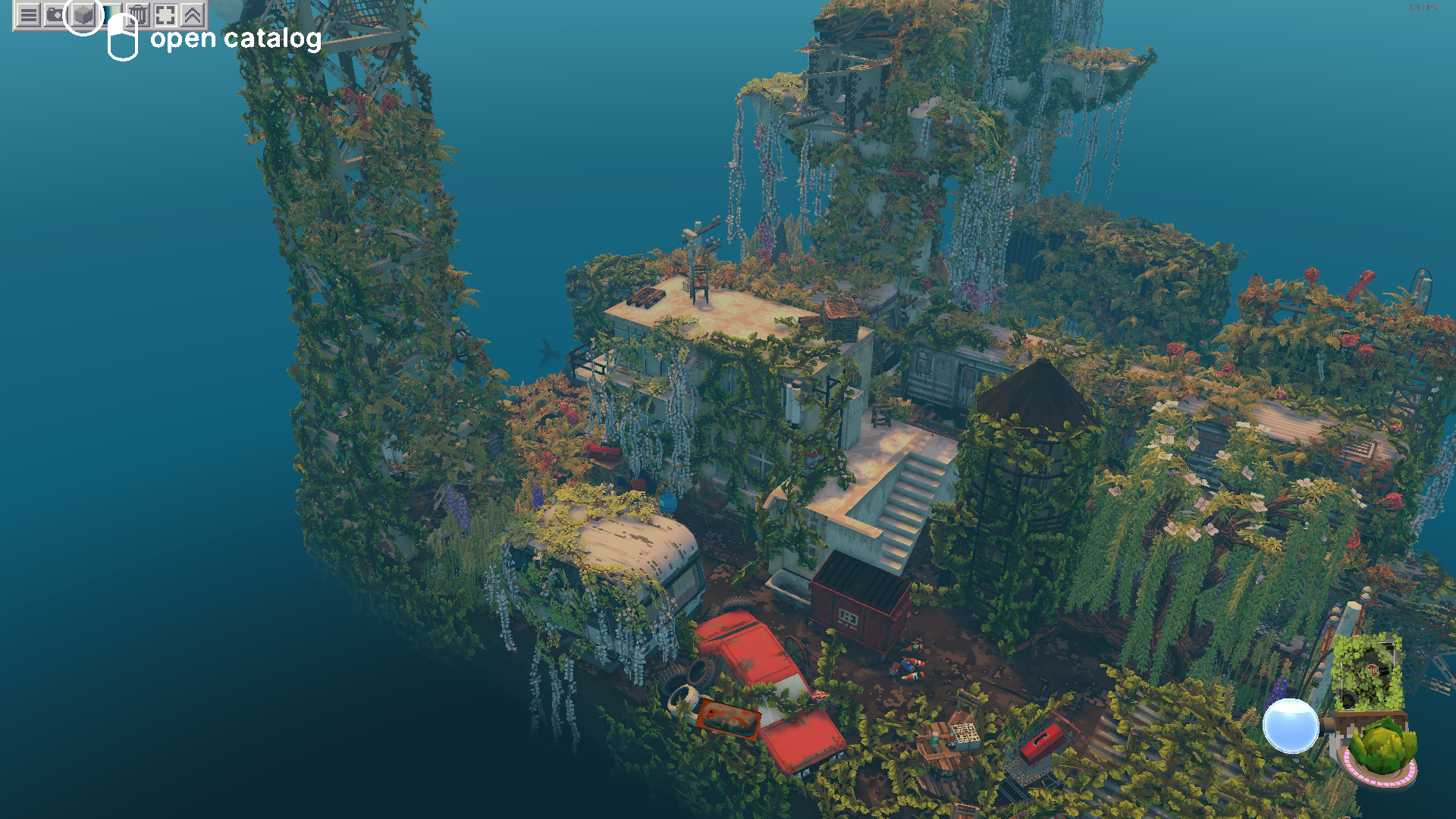 Last thing I want to mention is that this game didn’t make for fun, at least from my experience. I think this game is more like a relaxing space for whoever tired from the messy and chaos of the real world. This game is a place to calm yourself in a peaceful environment rather than an action adventure situation. It feels like watching an indie travel movie. So, if you expect this game to be an adventurous experience, I don't recommend it. But if you want a peaceful solitary space to escape from from the real world, this is what you have to try.