Axiom Verge is a Metroidvania platformer about a scientist who is injured in an accident and wakes up in an ancient alien land.

I originally played and reviewed this game years ago, but I was rather harsh on the game. Over the years, I thought about this game and my review of it, so here i am re-playing and re-reviewing it. I would say I had an overall better outlook on the game this time around, but I still ran into some of the issues I initially had with the game as well.

I never played a Metroidvania before this game, so I was really negative about that aspect of the game, but I’ve come around on the genre since then. I think this game has a lot of cool abilities for both dealing with enemies and clearing the path to new areas. Various weapon types, a grappling hook to swing around, a glitch ability that can clear path and hack enemies which has its own set of effects depending on the enemy, a drone for getting around in tight spaces, and more. Outside of the gameplay, I also really began to appreciate the game’s highly-detailed pixelated art style and varied, at-times haunting music. I really appreciated more of this game this time around, but the issues I originally had with the game began to creep in too. 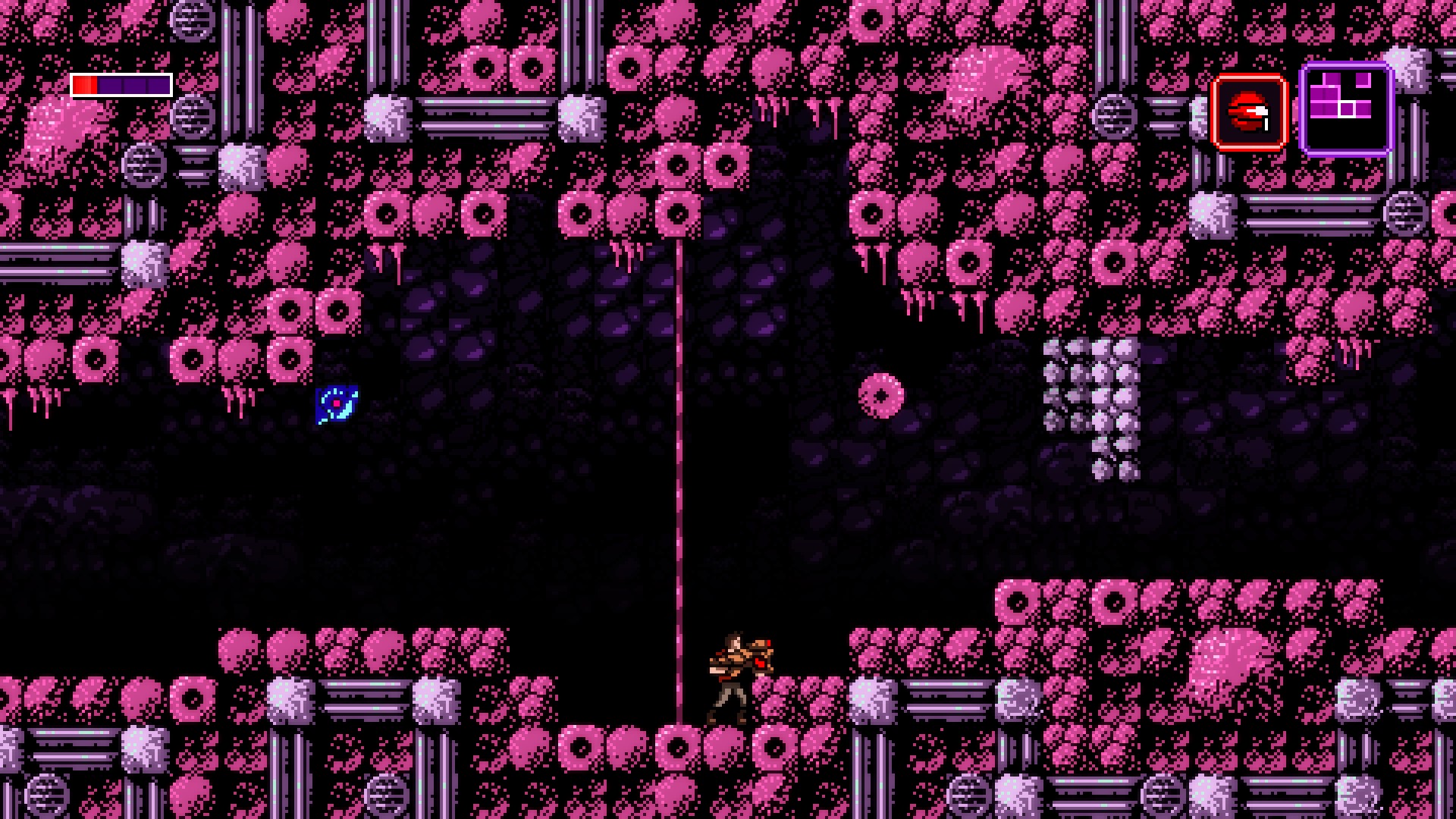 Some of the locations look gross, but in a good way.

The biggest issue is with the map, as it doesn’t have any fast travel and it doesn’t show locked points. This meant a lot of backtracking and getting lost searching for where my next point-of-entry was, and I eventually had to rely on a guide. Controls are just okay, but I wished aiming could’ve been done on the right stick instead of moving and aiming on the left. Boss fights are neat, but I found ways to cheese most of them, so they were never a real challenge to me. Finally, the ending area and some of the enemy types that inhabited this area were frustrating to me. I had much more positive time with the gameplay this time around, but some of the issues I originally had still linger and soured my experience a little bit.

I’m glad I revisited Axiom Verge, because I certainly do not believe the game is a 2/5 experience that I originally thought. I had a fun time running around and using the game’s various weapons and abilities to explore and fight enemies. I still had issues with getting lost and constant unnecessary backtracking, but they didn’t poison the experience as bad as last time. I’m always happy on proving myself wrong on something I was originally pessimistic about, and I’m looking forward to seeing what Axiom Verge 2 brings to the table.

Prey: Mooncrash is a DLC expansion to Prey following five people trying to escape from a moon base infested with Typhon.

One of the big key differences between this game and the main game is its run-based nature. The map doesn’t change, but items, enemies, and hazards are randomly spawned around the map. These initial changes didn’t do much for me, but as the game progresses, some more randomized elements start to pop up that can more drastically change a run. As each run goes on, a Typhon meter fills, and it hitting certain thresholds will increase the difficulty of enemies, adding a time constraint to each run. There is a specific item called a Delay Time Loop that will reset parts of that meter, so having a run where a lot of those spawn could make all the difference. Later on in the game, other more serious changes can happen between runs like whole areas having no power, radiation infecting parts of the map, and more. It’s a different dynamic compared to other randomized maps, because the layout is the same but what’s within the map changes, which meant having familiarity with the area without getting too comfortable with it. It’s a neat way of adding a randomized element to the game, but where this game really shines is with the characters.

In most immersive sims, you play as one character and can spec the character in one of many ways.In Mooncrash, you play as five characters, and each specializes in one or two things. One character can repair, one can hack, one is abilities-focused, and so on. The ultimate end goal of this game is to get all five characters to escape in the same run, but there are various missions and challenges to complete before them. At first, the most interesting part of using multiple characters is how each would affect the area in terms of items and enemies. If I pick up and use all of the health items in the map as one character, then the others would be screwed out of those items. As the game progresses, however, various mechanics open up around items like a storage drone that is shared among everyone and the ability to buy items for each character to start with. Where things really get interesting with the characters are the ways they help each other. As you play, you start to notice things only specific characters can interact with. For example, one of the exits requires a hack and a repair to work, which means two characters have to interact with that item before it can be used. Not only did I have to strategize my items, but I also had to strategize my character’s abilities to complete the missions and ultimately beat the game, and I think it’s a really cool evolution of the immersive sim genre that I believe makes it better than the base game. 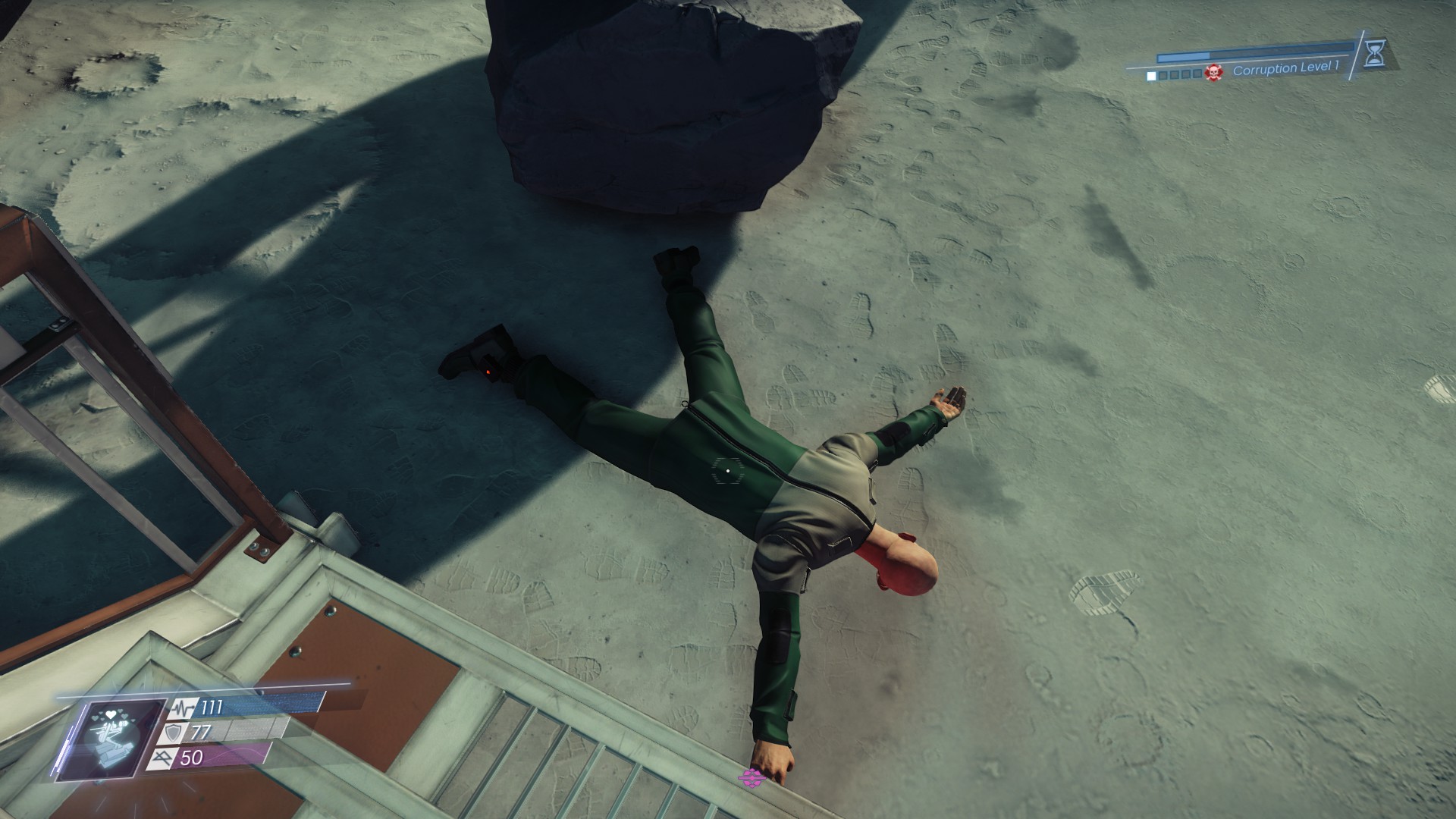 The dead body of the character I played before playing this current one. Since this is within the same run, I get to see my former self and take back all of my old loot.

While this different take on immersive sims is great, there are a few flaws to this DLC. The biggest is that they don’t go far enough with the different character ability synergies. There are a few missions and one escape option that requires multiple characters, but outside of that the only other time multiple characters are used is to open up doors to rooms only meant for looting or to repair turrets, and I ignored most of that stuff because I could find plenty of good stuff in the main areas, and the Typhon meter made me want to rush through each character instead of spend my time and loot. Also, while I think earning money and being able to buy starting items for each character is neat, this game goes a bit too far with it, as I earned way too much money to care about how much eat item costs. Every useful item in that game can be bought to the point where when I did try for all five to escape, I had the option to buy Delay Time Loops, which I bought a bunch of, so my “daring escape” didn’t ever get as difficult as it should have.

Prey: Mooncrash is a great piece of DLC that I think is better than the main game, as it changes up what an immersive sim can be. I would love to see a game down the line that fleshes out these character synergies and have each spec branch work together instead of offering every possible spec option and being forced down a particular lane. I think the game should’ve gone a little further with it, but as a proof-of-concept, Mooncrash is rock-solid.

Rogue Legacy is a 2D rogue-lite action platformer about infiltrating an ever-changing castle.

Combat in this game is about as simple as it gets. You can attack with a sword or a mana ability, jump (and double jump with the right abilities), dash if you have the right abilities, and a class-specific ability. In this simplicity, however, is quite a bit of fun and challenge considering the difficulty of enemies. Even in early areas with lots of upgrades, enemies and hazards can prove dangerous, and combining this simplicity with difficulty was engaging. One element of this game I appreciated the most, however, is its level design. Instead of it being a linear affair, the entire game’s worth of content is laid out in each run, and depending on the direction you go is where you can find the next boss. You start in the first area, the second one is to the right of the first area, the third is above, and the fourth is below. Being able to fast-track to where you need to go and really just have the freedom to go where you want made tackling some of the later areas a lot easier to get around.

The big talking point about this game are the generated characters. In this game, each new run is played by the son or daughter of your previous character, and each character can be a different class with different combat abilities and traits. Seeing and trying out the various classes and traits was a blast early on, but its novelty wore off over time. The differences between classes boiled down to essentially stat changes and one or two combat abilities, but I was hoping for a more fundamental change like different weapons, attack types, etc. As for traits, most of them can be boiled down to either useful ones or gimmick ones. The gimmick ones, like a black-and-white filter or near sightedness, are fun to see the first time but wear out their welcome fast, while the useful ones like different sized characters or the ability to get mana from breaking stuff proved more useful. Towards the end of my time with this game, however, I found myself gravitating towards characters with few-to-no traits because a lot of them just aren’t really worth it. 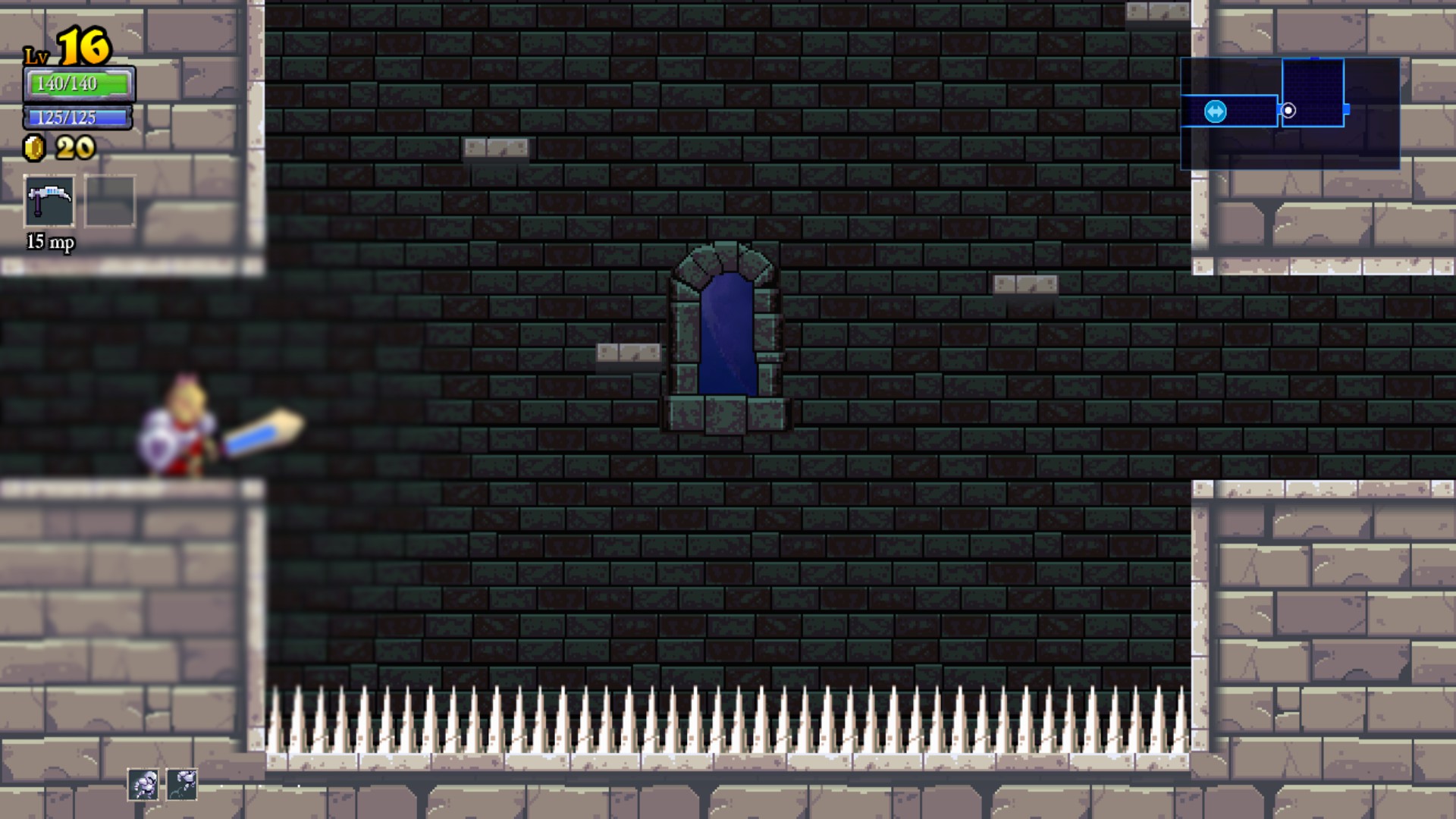 Not all knights have great eyesight.

The other big element of this game are permanent upgrades. Gold earned in the game can be used to buy various upgrades like stat boosts, class upgrades, and more. On top of this, there is a blacksmith and an enchantress that offer armor upgrades and abilities that can be unlocked by finding them in the game. Having progression of some kind in a rogue-lite is crucial for me and whether or not I will return to the game, but like the characters, it’s something that only lasts for so long. It didn’t take long for the pace of upgrades to slow down to a crawl, often just being one upgrade per run. A lot of the stat upgrades aren’t significant changes either, so the grind to get better stats felt too slow to be enjoyable.

In the end, Rogue Legacy is a solid game, but it didn’t last as long as I would’ve liked. The combat is fun and its level design is great, but its marquee features didn’t quite do it for me. I only managed to get through the first two bosses of the game before calling it quits not out of difficulty, but more out of an annoyance to deal with its incredibly slow dripfeed of upgrades. I think the game is worth playing, but just be prepared to slow down significantly when that time comes.