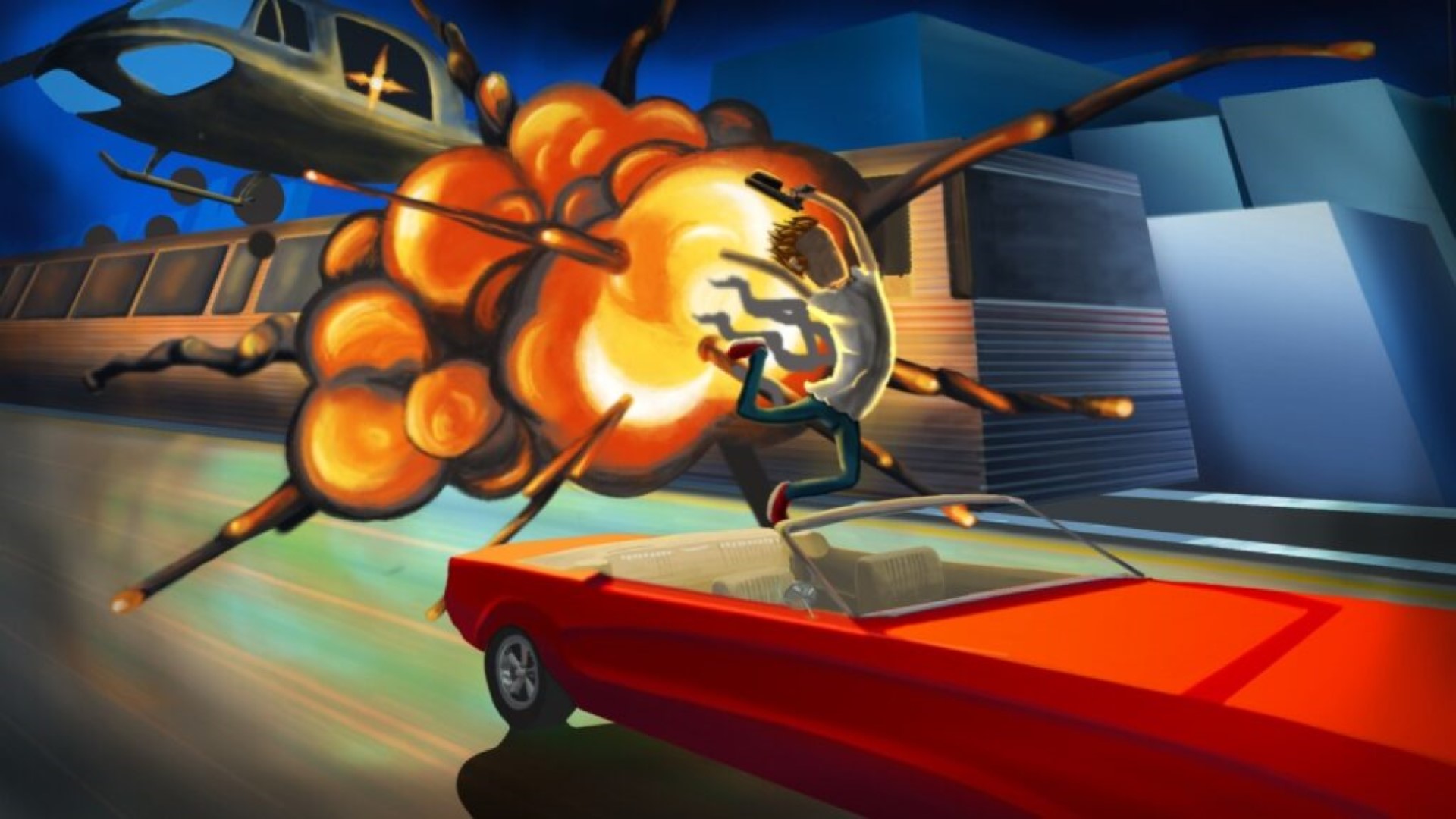 A speed limit implies following the rules, but what are the rules when a mysterious man hands you a gun in the middle of a train ride? In the game Speed Limit, there is only one rule: survive. Where other games stick to one genre or perspective, however, this game specializes in changing things up, bouncing between five mini arcade experiences ranging from a side-scroller to an isometric helicopter game. This is the type of game to cut the brake lines and throw a brick on the gas pedal; but much like a car driving off a cliff, it’s over too soon.

Speed Limit doesn’t have a plot. Instead, it wants to focus on what makes the game special: its genre-bending action. The first part of the game is a side-scrolling shooter on a train which is all about dishing out bullets before they are delivered to you. Right after leaving the train, the game transitions into a top-down driving sequence where you dodge oncoming traffic while shooting at enemy cars and motorcycles. After that, you hop on a motorcycle where the camera shifts behind-the-back and the threat of running into other cars feels heightened. From there, you get into a helicopter and shoot down an onslaught of air and sea vehicles while avoiding lighthouses and bridges in an isometric shooter. Once that’s complete, you hop into a fighter jet segment where you travel towards the camera and take down other jets with barrel rolls and the jet’s mini-gun. To finish off the whole thing, you end the game by free-falling from the sky, trying to dodge debris. 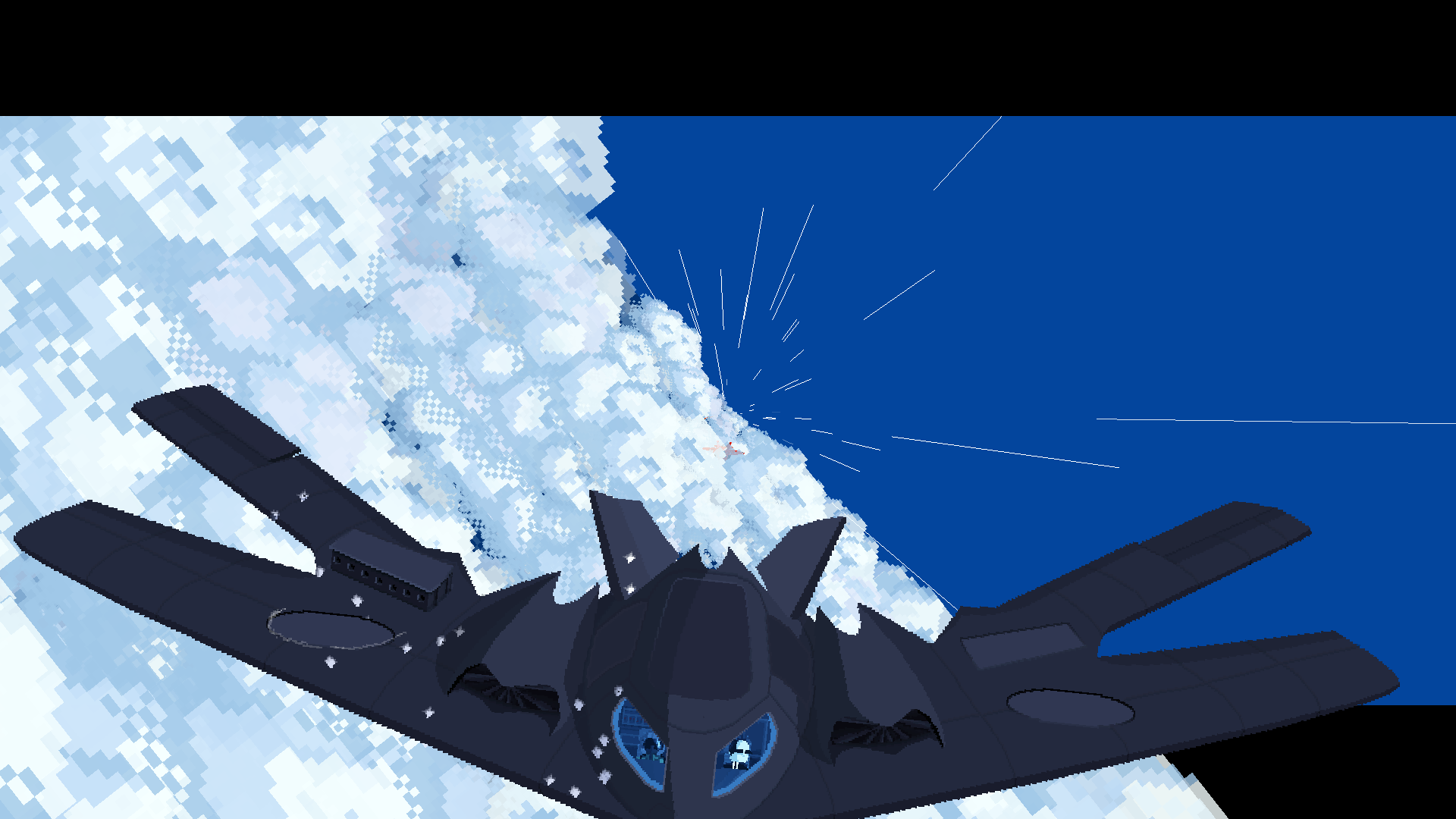 The final boss of the game, with multiple weapons to disable before being able to take it down.

One thing this game executes well is uniformity. Between Speed Limit’s five segments, the game’s difficulty, controls, and quality stays consistent. Sure, there are segments I prefer more than others (the fighter jet and train segments being particular highlights for me), but none of them stop the flow of gameplay or feel weak compared to the others. What also stays consistent is its nonstop action. From beginning-to-end, this game is nonstop with no load screens and near-instant respawns, and I appreciate a game that gets to the point and doesn’t waste my time. The action isn’t perfect though, as there are some small issues I found in a few of the modes. Some hazards and projectiles like rockets in the final boss segment or crossing underneath bridges in the helicopter segment are hard to gauge. The motorcycle controls feel a bit stiff and some parts of that level are frustratingly tight. The helicopter lane also feels too tight, and both segments would’ve benefitted from greater maneuverability. Despite being one of my favorite segments, the fighter jet part of the game had the most frustrations for me because trying to stay behind enemy jets can be finicky and the final boss can sometimes throw out random cheap attacks. Each of the five modes are a blast to play, and its commitment to tightly-packed action and consistency makes some of its shortcomings easy to forget.

As I played through this game, another thing I really began to appreciate are the stylistic additions this game has. The easiest thing to notice in this game are the huge letterboxes seen throughout the game, but each segment toys around with these letterboxes in interesting ways. Shooting your gun while on the motorcycle, for example, will result in the bullet casing flying back towards the screen and will overlap the letterbox. My favorite stylistic choice is also in the motorcycle segment, in which going too slow will result in the camera pulling back through the vehicle trying to run you over. Other interesting stylistic choices include brief segments in train tunnels where everything goes dark with exception to the brief flash of your shots, smooth transitions between each segment like a motorcyclist appearing as soon as you pass underneath a bridge to start the motorcycle segment, flared up lights in the motorcycle segment to show visible signs of tiredness, and the ending to the whole experience being a large loop right back to the beginning. On top of all this, the fast-paced electronic music plays well to the mood of each segment, and the game’s pixel art really shines in spots like watching enemy jets get swiss cheeesed by my bullets or seeing the change in time-of-day. I thought the game would be too focused on combat to have any style to it, but clearly I was wrong, and I think it gives the game a personality as well as plays to the fluidity of each segment. 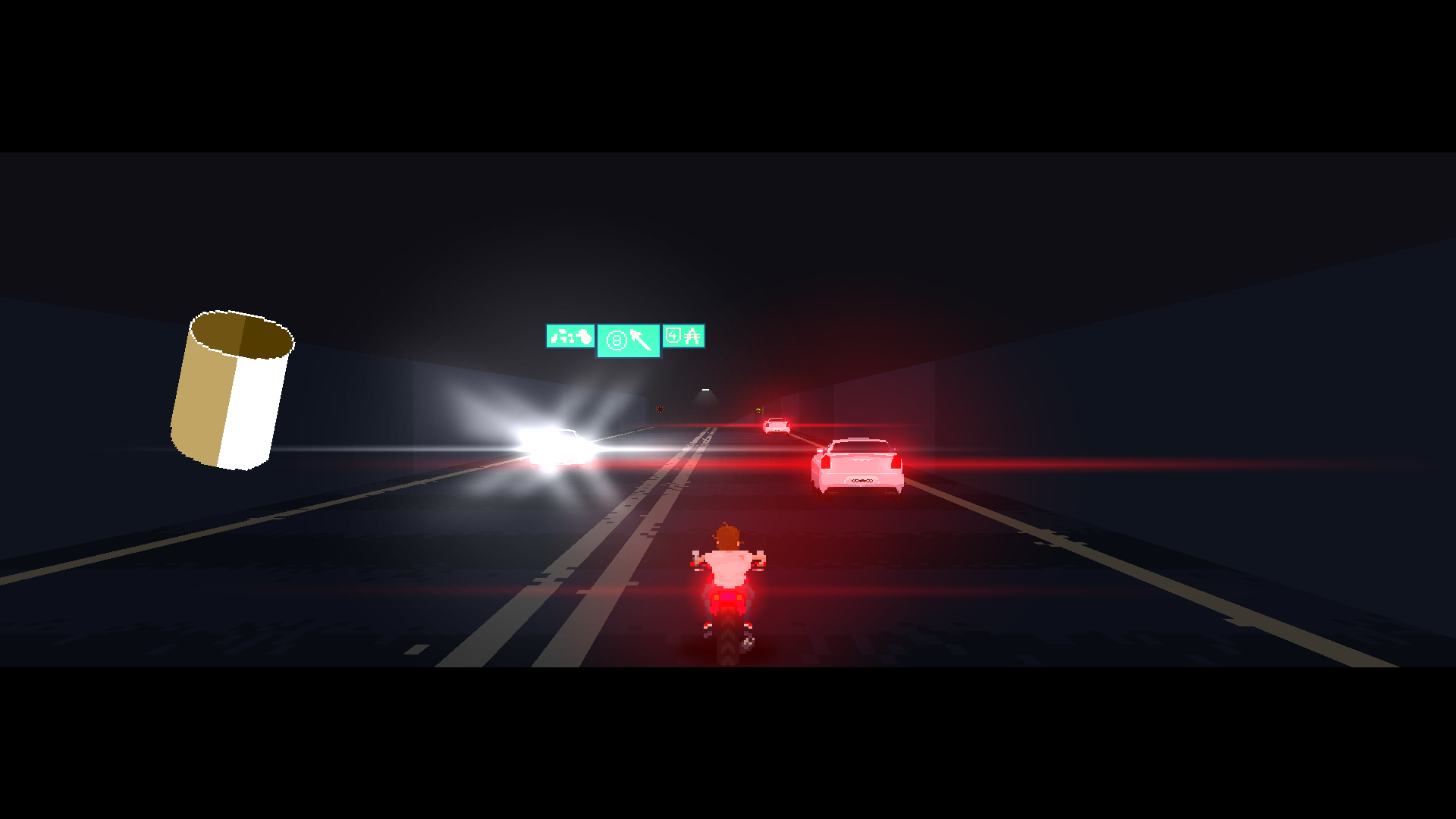 Casings fly towards the screen whenever a round is shot.

What unfortunately doesn’t play so well to the game is its length, which is really short. This game is difficult thanks to spaced-out checkpoints and one-hit deaths/low vehicle health, so trying to beat the game the first time won’t be quite as fast, but even then playing through all segments will only take about an hour to complete. If you play the game on the easy difficulty, which reduces the amount of enemy spawns as well as changes around some hazards and enemy behaviors, then that first try time is likely even further reduced. Once you beat the game, a time trial mode and an infinite difficulty mode unlocks. The former turns the experience into a speedrun where each segment as well as the entire game from beginning-to-end is timed, and the latter simply connects the ending and the beginning together to create an infinite loop. The speedrun mode offers some replayability for both easy and normal difficulty, and I enjoyed trying to achieve faster times (fifteen minutes to complete easy and seventeen minutes to complete normal as of writing this), but anyone who isn’t a fan of speedrunning games won’t find any other reason to go back, and the infinite mode isn’t really worth playing outside of the novelty of seeing the game loop because this mode doesn’t track time or amount of loops completed. This game is only priced at $10, and like I said I appreciate games that don’t waste my time and deliver a short-but-tight experience over some eighty-hour game with mediocre content, but I also think the game would’ve benefitted from another mode or a few more segments.

In conclusion, Speed Limit is a solid arcade title that manages to squish five games into one seamless experience. Each segment is consistent in its quality and thrills, and its surprising amount of style gives the game a personality. I think the game could do with a little more, but what is there is worth its $10 price tag, and I would recommend this game to anyone looking for a tight arcade or speedrunning experience.