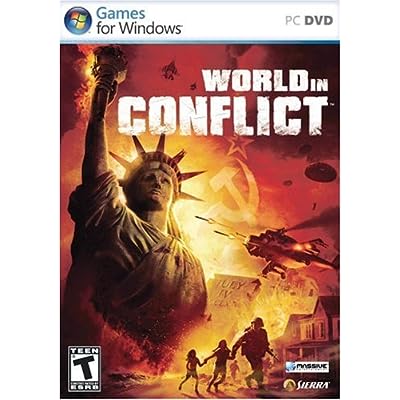 I'm not a RTS fan, I'll get that out there right now. I've played a bunch in my day, but I don't have the strategical patience to ever make it work for me. What usually happens is I get about 1/3 through the campaign and then a waiter comes out to ask me how I'd like my ass cooked; it's not a good scene and I've learned my lesson. That was until I read about World in Conflict -- I would play this 1/3 of the way through for sure.

The story involves the Soviets invading Europe, which causes NATO to step in and say, "hey, get off the grass." The Soviets, being the ever vigilant fans of landscaping that they are, decide to throw up some newly learned English Fingers and let their dogs crap all over the US and A. At this point, I believe, the Secretary of Agriculture moseys over, removes his straw hat and lowers the straps on his overalls giving the American people the sign to fight them damn Ruskies. That's merely step 1 to the excitement, now check out the box art. It looks like the publisher went to Mrs. Johnson's 2nd grade class and got some kids to do mock-ups of "totally rad shit." This is the only explanation for the level of awesome printed on the box. We have the Statue of Liberty in serious "Planet of the Apes" trouble, paratroopers, Hammer & Sickle, a helicopter firing missiles, people fleeing, buildings collapsing, fire and there's probably a 2-headed monkey hiding in there somewhere (kids love monkeys). On top of that, the game doesn't suck.

If I had a PC, I'd be all over this. Since I don't, I'll have to settle with creating fan fiction based off the box art and photoshopping laz0rs into it. If you're still on the fence, it's $19.99 which is pretty g-damn cheap AND don't forget about your patriotism.