One thing that my family is totally in to is antiquing.  My sister and her husband are both archaeologists, my mom just really lives kitchy stuff (lots of candlewick), and my brother always enjoys rummaging through a store.  Personally, it usually bores me to tears except for the 10 minutes that I find Freemason brickabrak or an old N64 game.  One day, I decided to give myself purpose at the antique malls I was forced to visit, and determined I would get into sports / trading cards that make me laugh, with the holy grail being Billy Ripken's Fuck Face card.  I don't think to date I have found any good cards, but it did make something interesting for me to do while wandering about with the family, and I have ordered several cards online to complete my esoteric collection.  Today, I wanted to share that list with you all, as I just got in my last splurge of cards and figure I will be set for a few more months! 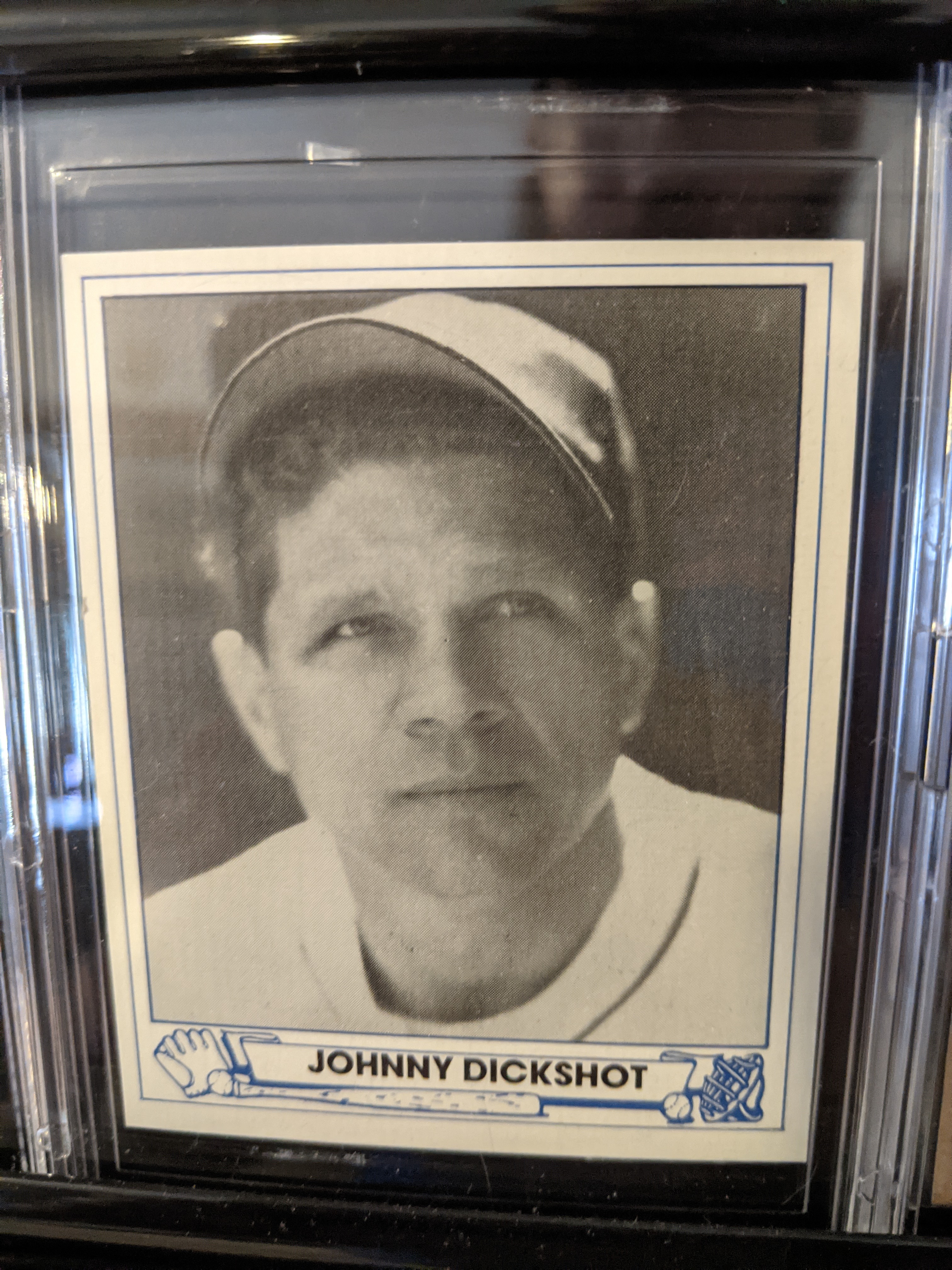 Kicking things off is good ol' Johnny Dickshot.  Was he famous?  Not really.  Exceptional at baseball?  The back of the card tells me "no".  But his name is Johnny Dickshot, so I had to own that one. 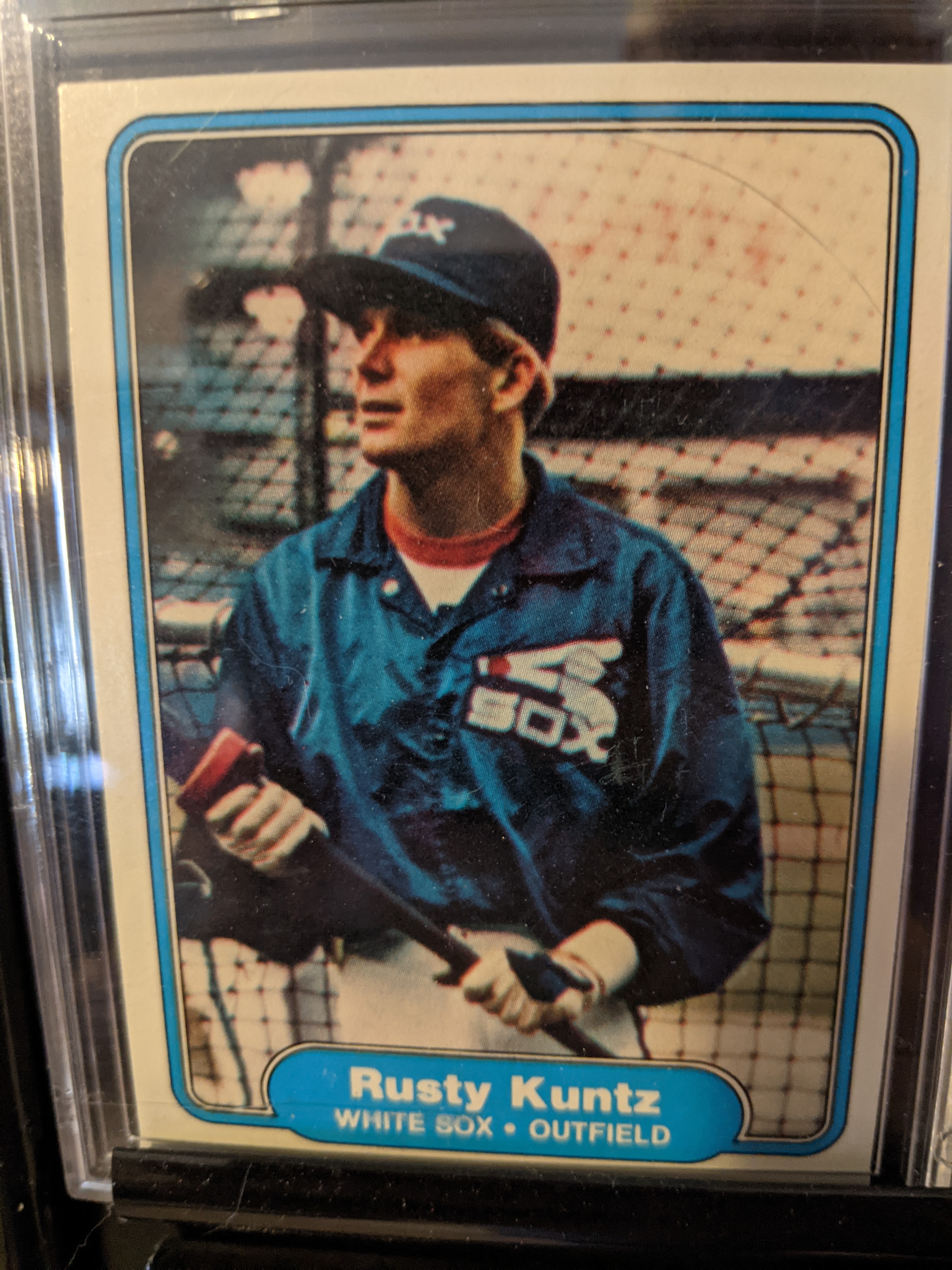 And where would Johnny be without his friend Rusty Kuntz?  For those who are 'in the know' its pronounced koontz, but looking at it makes it hard to tell.  It would be enough for me just to own this card, but as I talked to one of my friends, apparently he has run into him a few times.  I guess he retired from playing, but still does coaching, so you just can't get away from Kuntz. 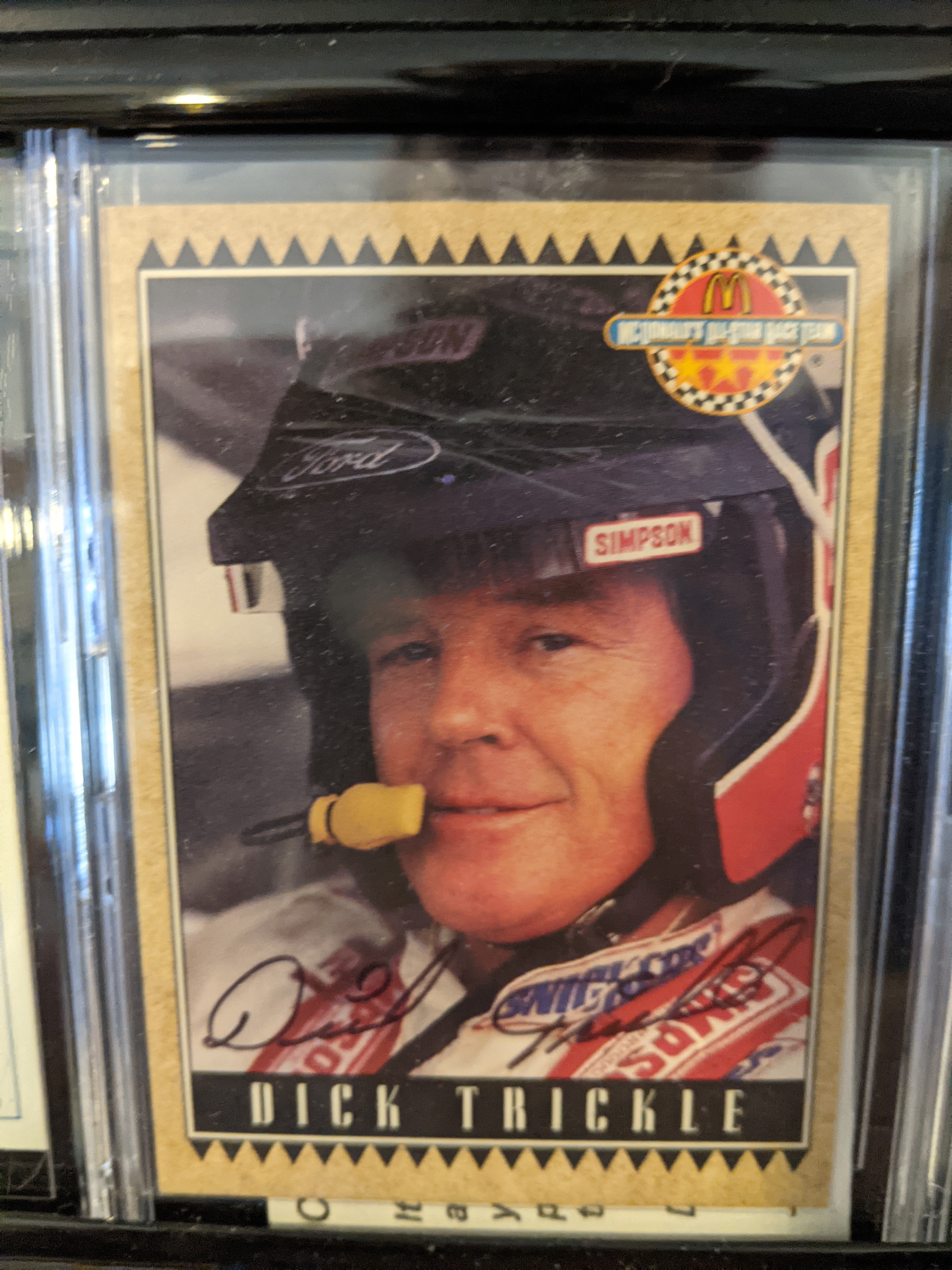 The man, the myth, the STD euphamism: Dick Trickle.  I first heard about Dick from the show Game Grumps because Danny had mentioned that announcers would call out the podium, then whatever position Dick was in, i.e. "Earnhart first, Patrick second, and Bubba in third....and Dick Trickle in 42nd!".  He had a really funny name, so I got the card, and for a small premium I even got a signed copy!  Then I thought it was kind of cruel to make fun of him just because of his name and I did some research, and this guy is one of the guiniely coolest NASCAR drivers I have ever heard of.  He has the record for the oldest rookie after he joined from smaller circuits.  He drilled a hole in his helmet so he could fit in a cigarette while he drove.  Stories tell that he would grab a beer at a party and just talk to anyone - fans, other drivers, audience members - for hours.  He held on to the beer so people would think he was partying, but he just liked being with people.  Watch a documentary on this dude - he is awesome. 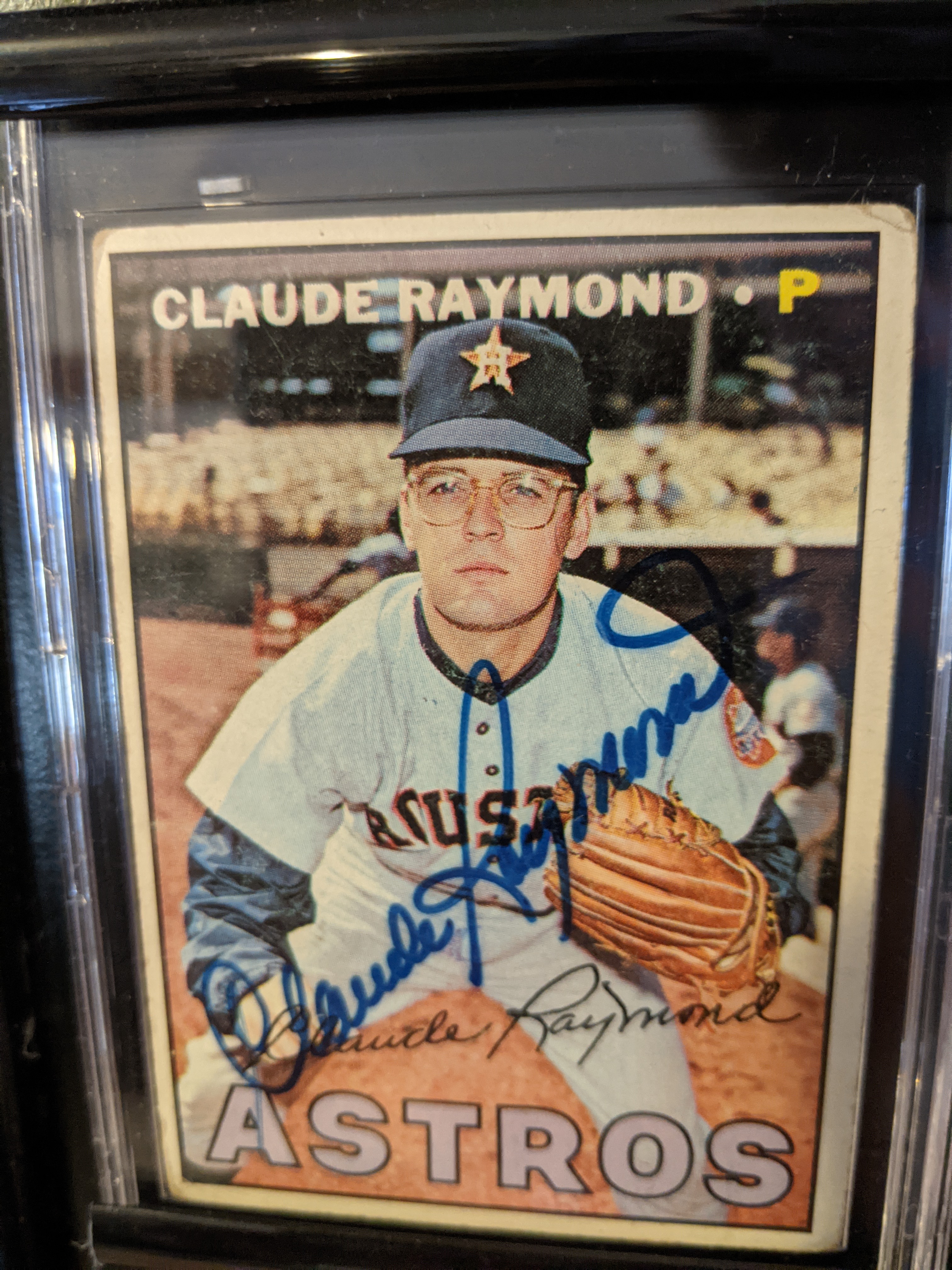 Another one of my signed cards, Raymond might not be obvious at first, however, if you look closely, his fly is open.  This is not only funny on its own, but this happened in back to back years on his cards. 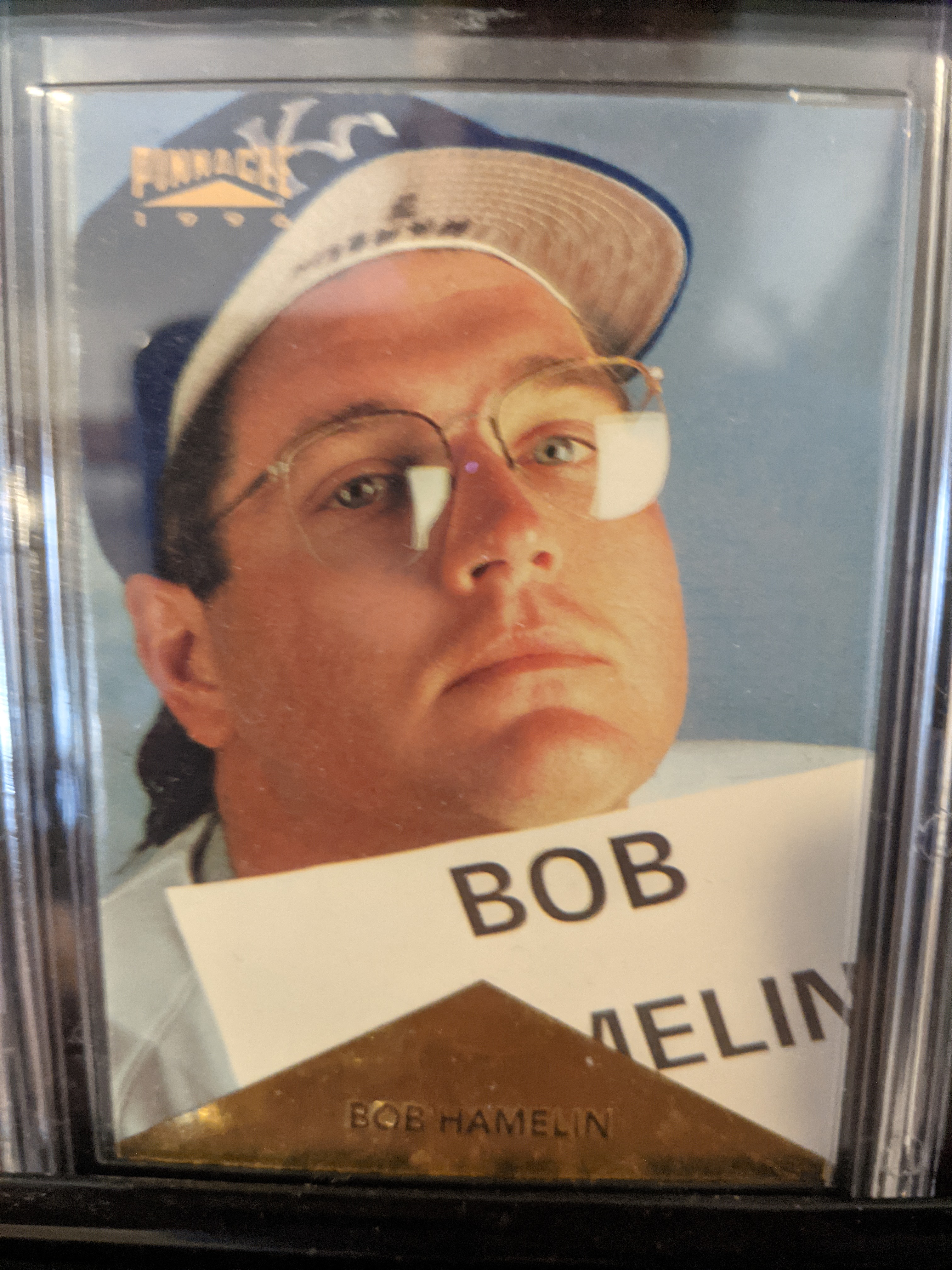 Bob Hamelin?  Bob Hamelin. Whats that under his hat?  B Hamelin.  If George Costanza and Bob Hamlin had a Bob together it would Bob the most Bob Hamelin to ever Hamelin a Bob. 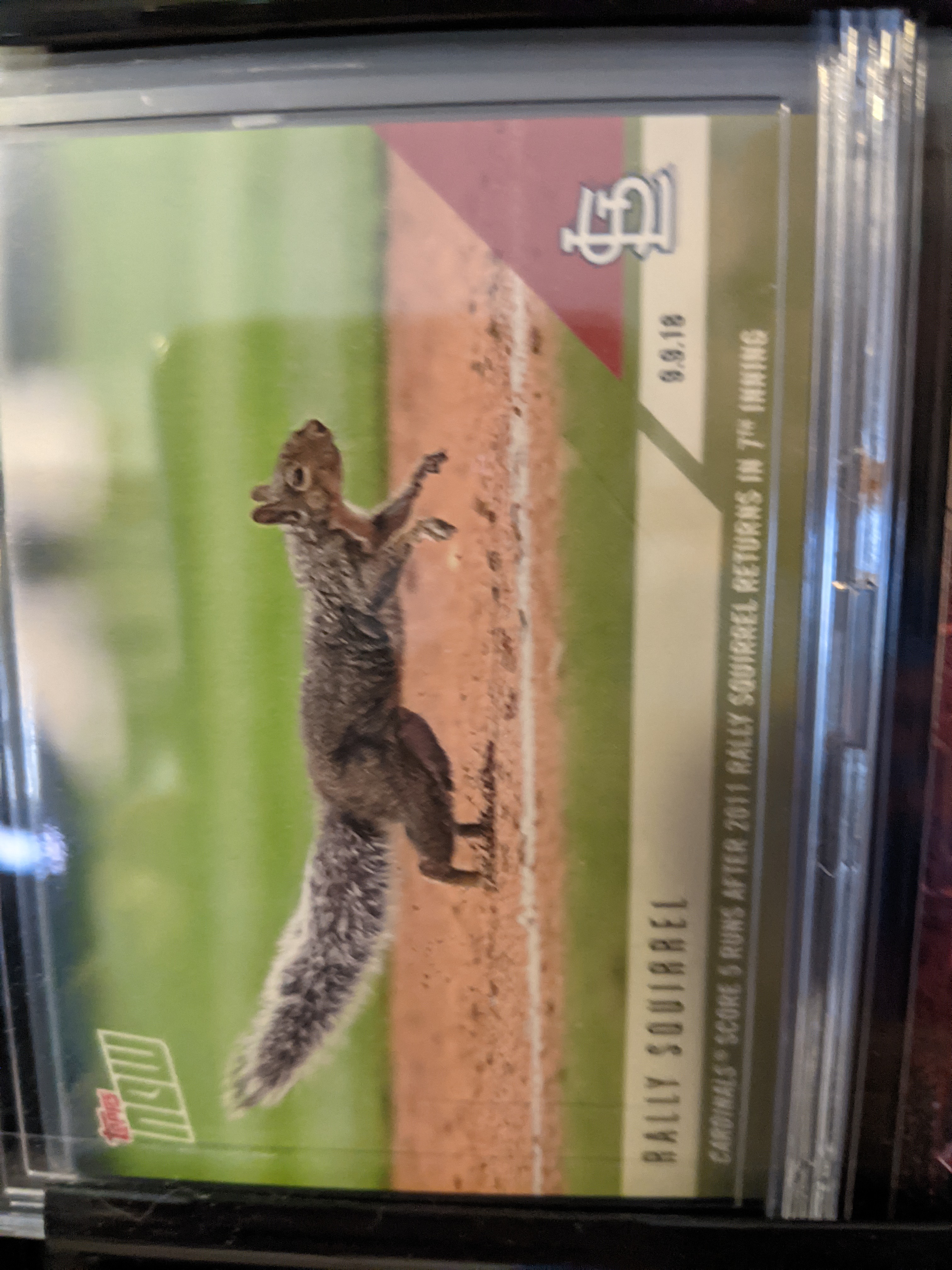 Rally Squirrel!  I really want the 'original' version of this instead of the Topps Now version (Topps now is reprints and reimagining of certain cards - we'll come back to one of those later.)  The original version is an alternate Skip Schumaker card which only features his foot, and instead the focus of the card is a squirrel running the bases with him.  This is a suitable proxy until I get the time and money for the real thing (upwards of $300 is the only one I could find!). 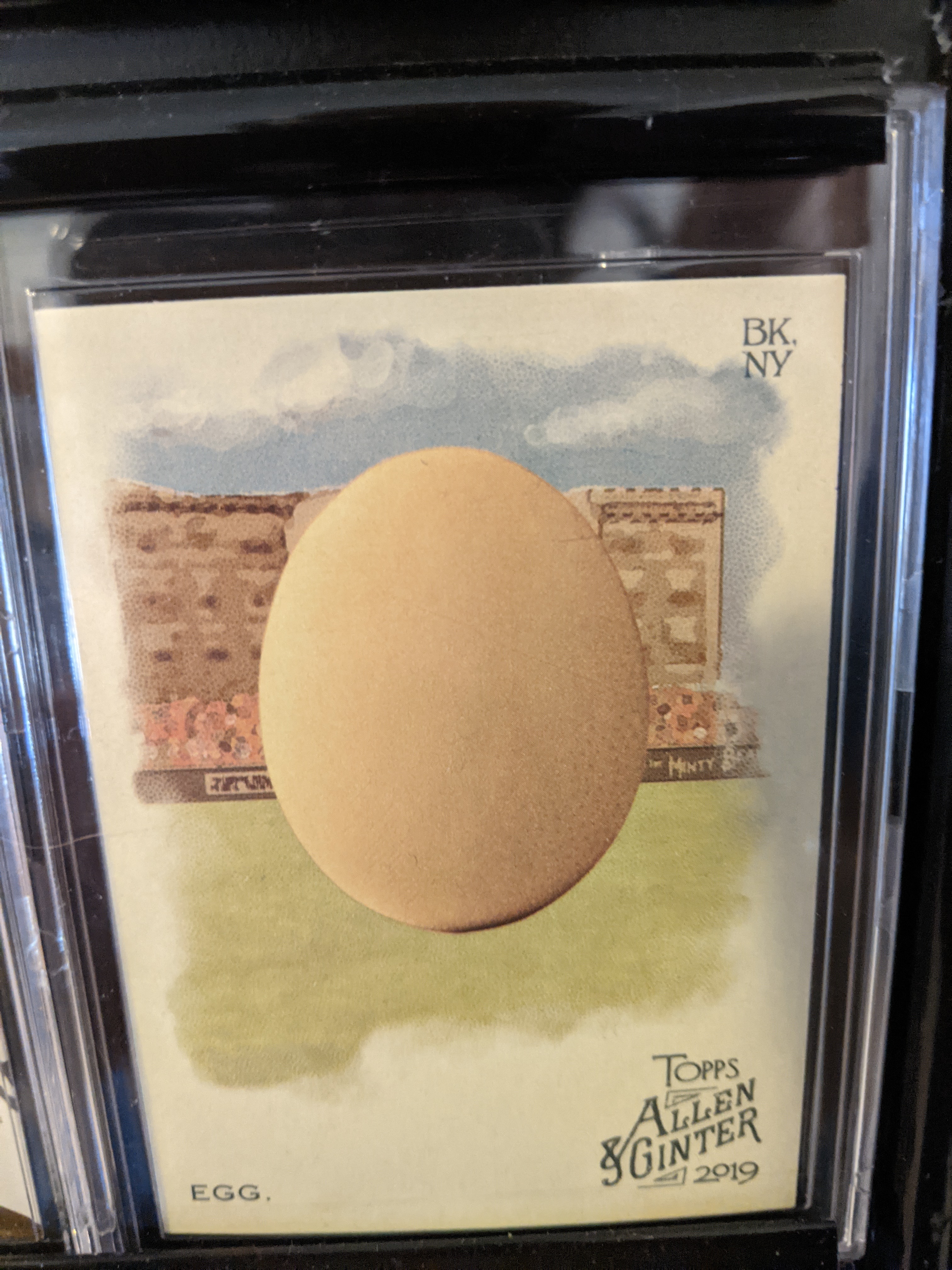 Her?  Squirrels aren't the only thing that can show up on Topps cards!  You can also get Egg!  With a record 0 RBI, its Egg!  Technically this card was made for the highest liked Instagram post or something, but I just like that its Egg. 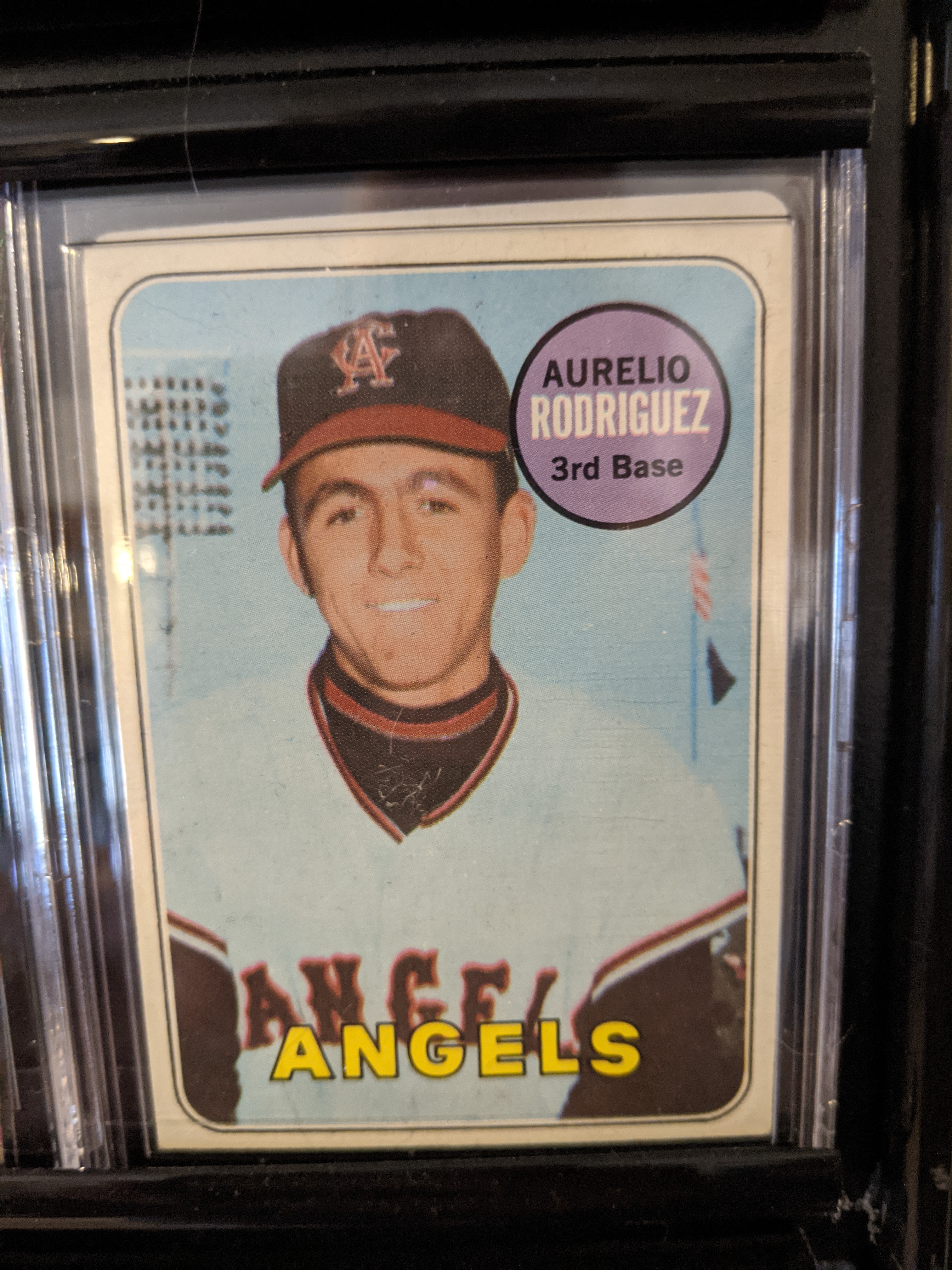 Who is on this card?  Ill give you 3 guesses and the first two don't count!  Did you guess Aurelio Rodriguez?  Wrong.  Thats actually Leonard Garcia, the team's bat boy.  Take that, fame and fortune. 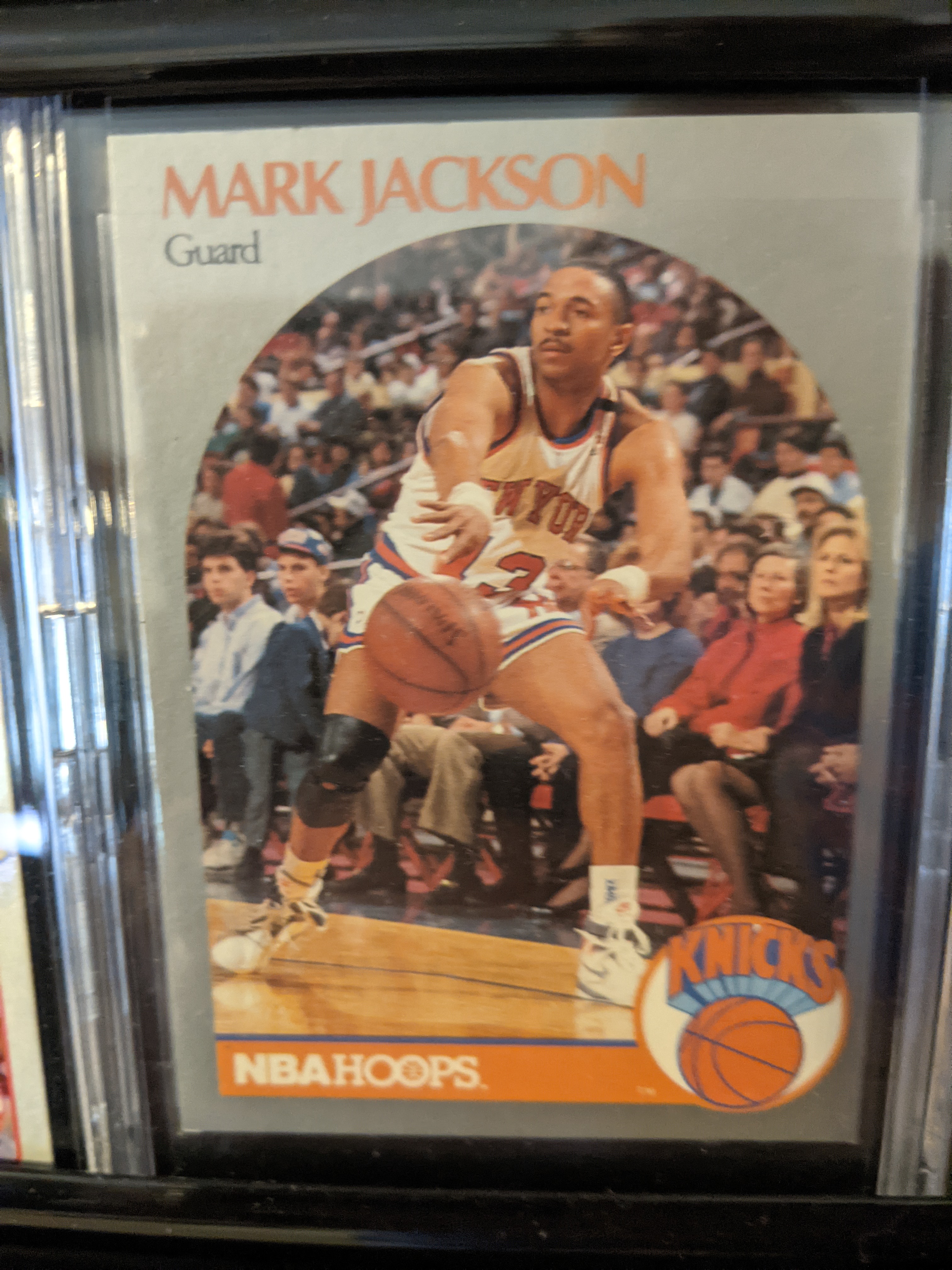 Following with the idea of the people on the card not being who you think they are, this card got attention on Reddit which spiked its value. Mark Jackson is (relatively) not notable, but the two gentlemen over his right shoulder are - The Menendez brothers, who killed thier own parents, and then had the weirdest Ferris Bueller's day off around L.A which included, you guessed it: basketball. 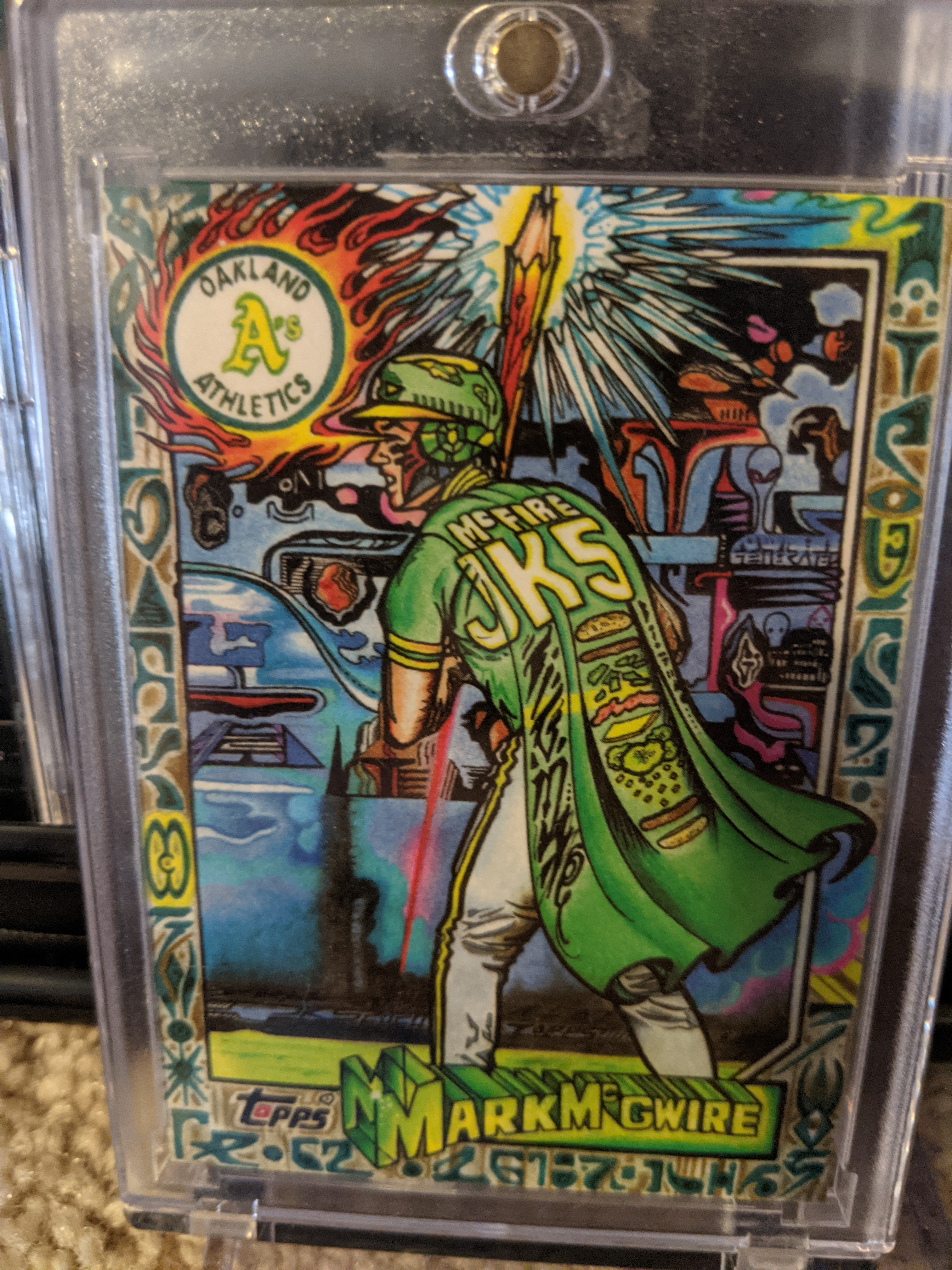 After I had mentioned I was collecting odd cards, a community member asked if I saw the weird Mark McGwire card on Topps Now.  I saw the above and went "Holy shit, I need that" and purchased it.  It was only later that I learned that wasn't the version they were talking about, isntead it was my second holy grail card, at over $500.  Sadly, these artists redrawings of famous cards do not have a back, and are sitting on a large foam insert, so they don't fit in my clamshell covers meaning they have to be kept off to the side of the normal collection.  The price of artistic liberty? 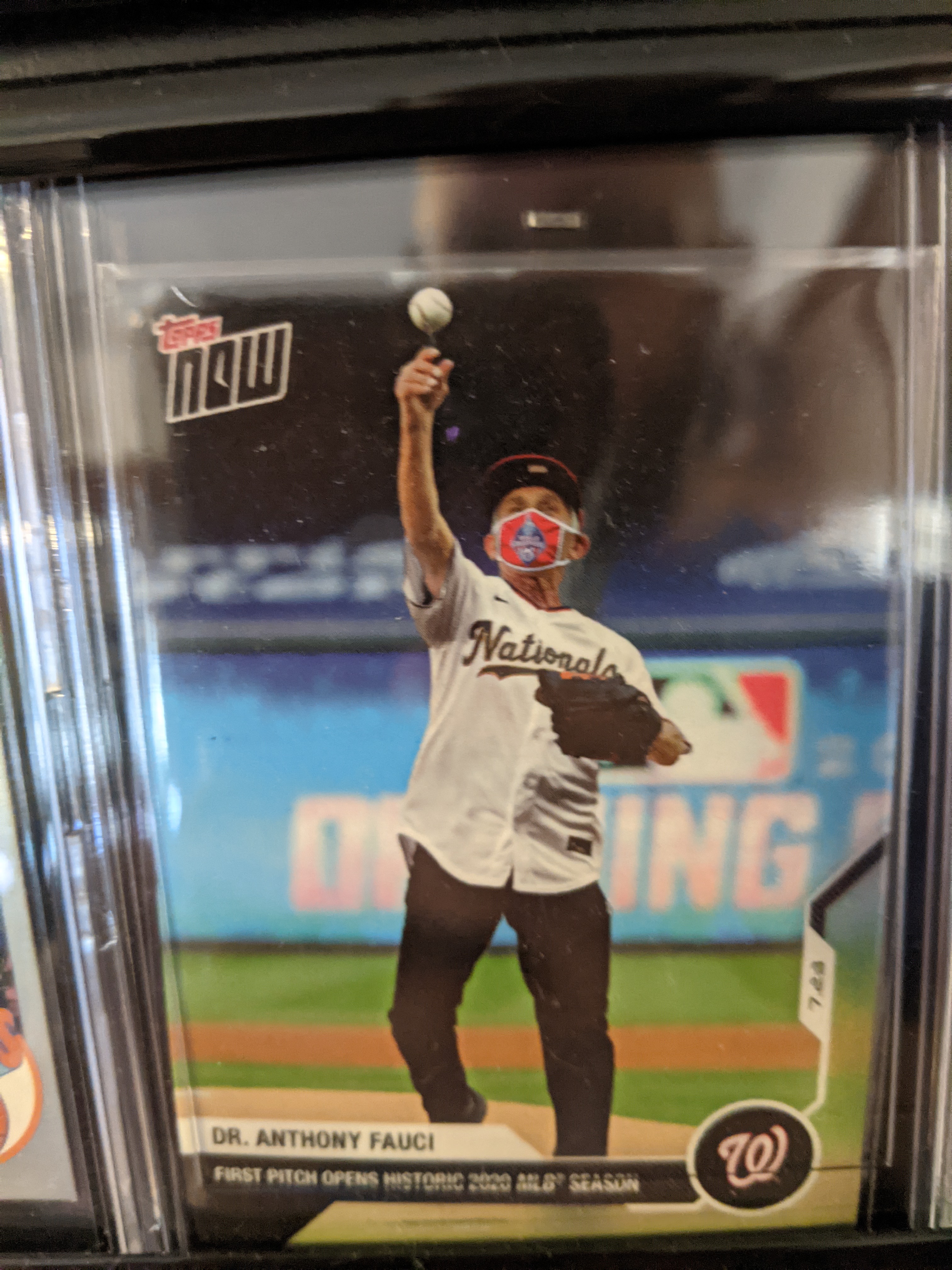 With the current shit show we are in, I coulnd't pass up getting a Dr Fauci baseball card, also a Topps Now special.  I did miss the original printing, sadly, so I had to get it secondhand, but not at an unreasonable markup.  I can't wait to explain to future wastelanders why this man was so important, and so ignored. 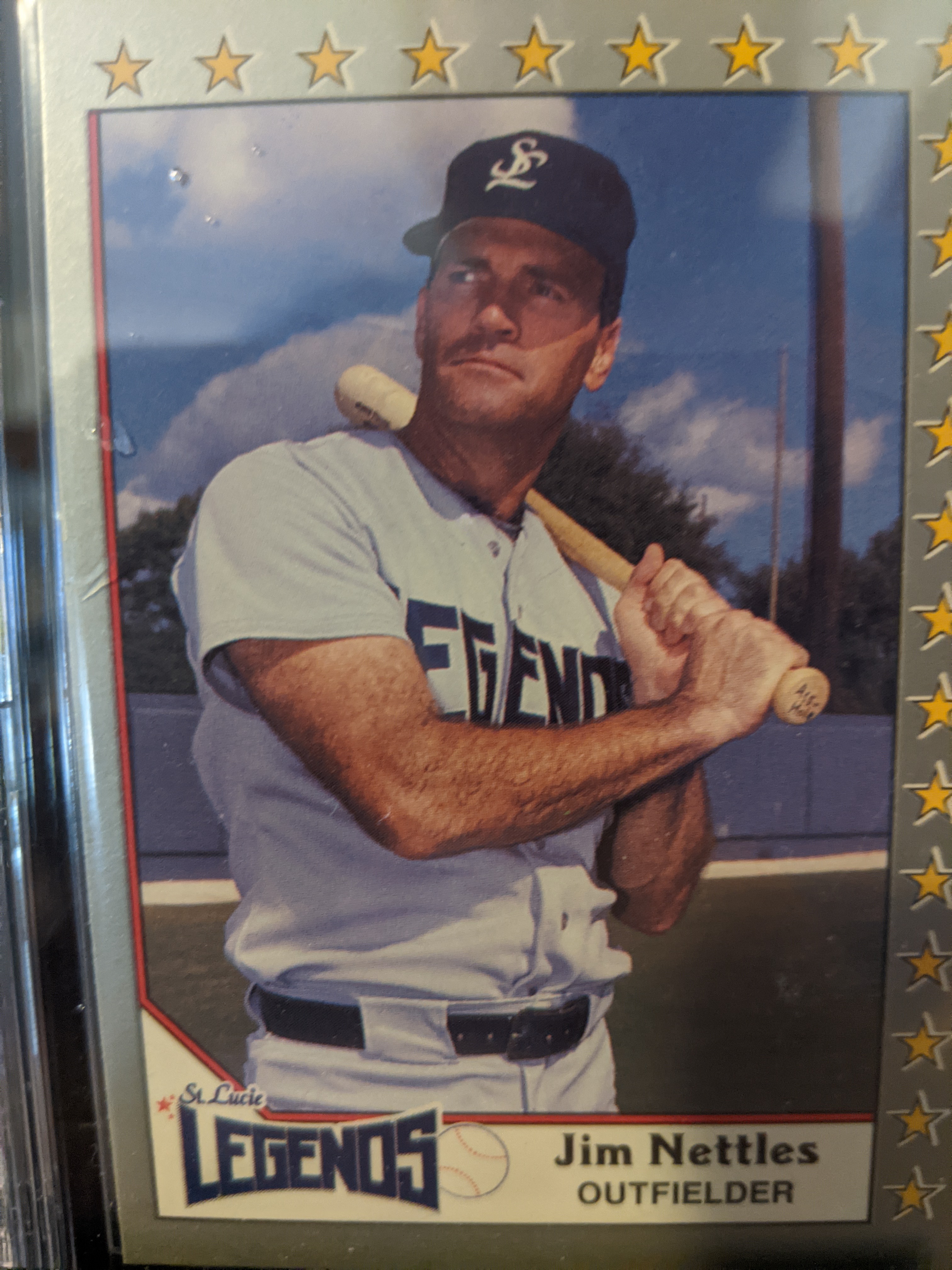 Heh.  His bat says ass hole on it.  This is unparalleled adult humor 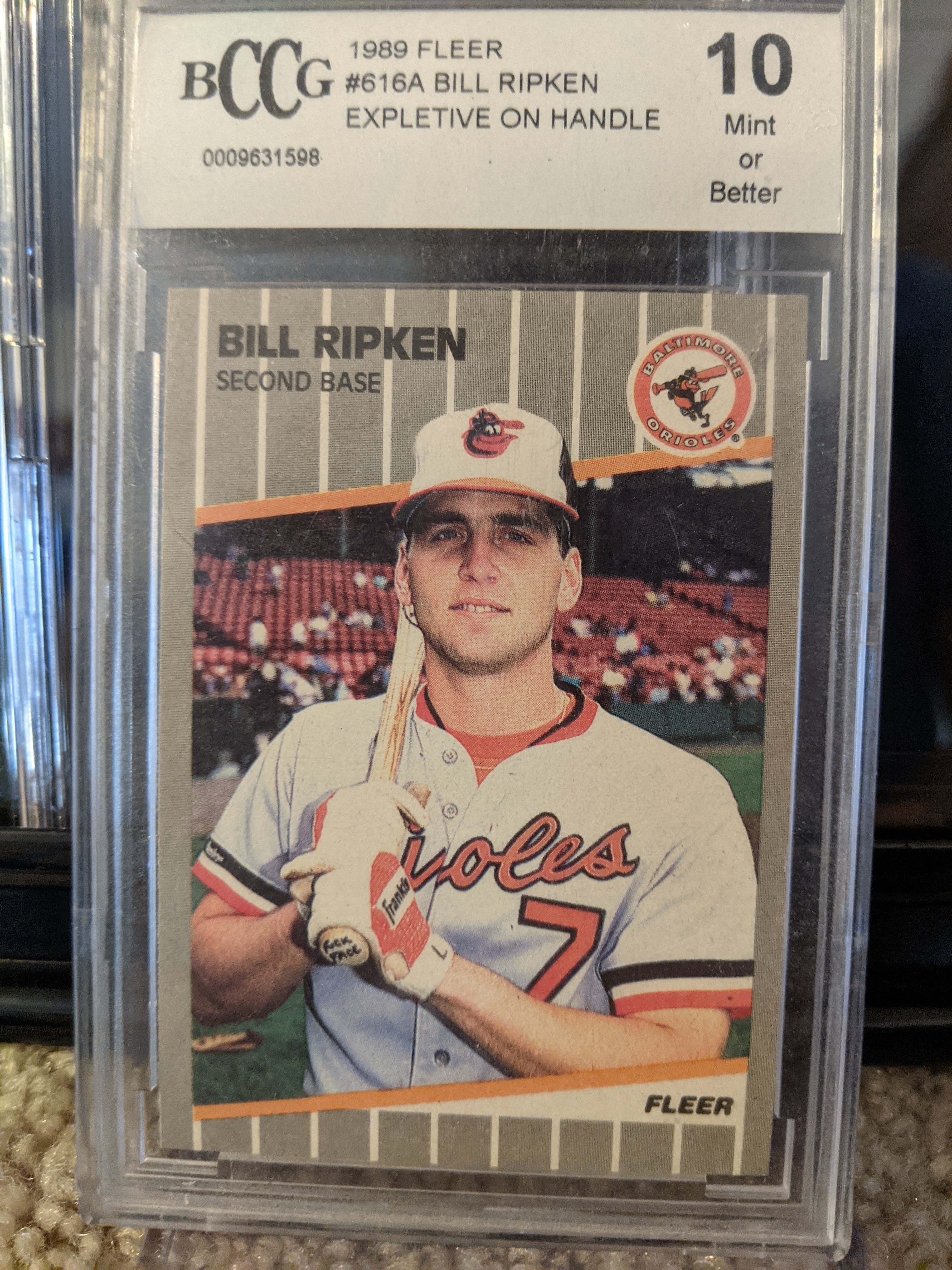 Heh.  His bat says fuck face on it.  Not only is that great, but this card is the beginning of cards that are fairly valuable, and my only rated card!  I told my mom about my search and she got it for my birthday, but I don't know for how much.  Auctions vary wildly in price, but I'm just happy to have one of the most infamous error cards to call my own. 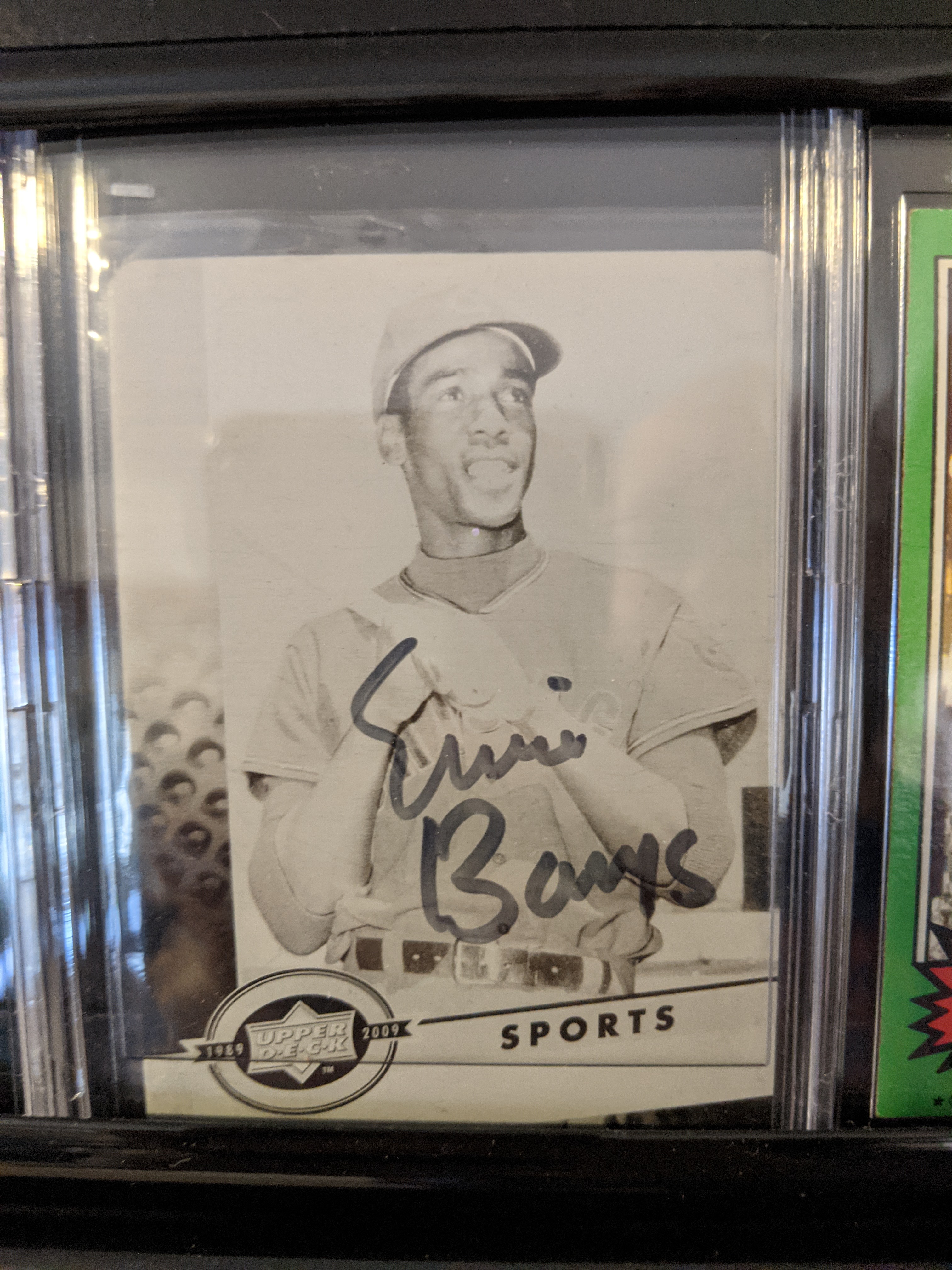 My mother also got me this card, which was a bit 'misguided' I want to say.  It's valuable and perosonal, but it isn't funny.  When I received it I didn't know who he was, which would make most of my high school friend's angry as I guess he was a Chicago legend (spoiler: I'm from IL).  So while I enjoy having this card, it will likely sit alongside my collection rather then the shining pinnacle on top, once it is finally complete. 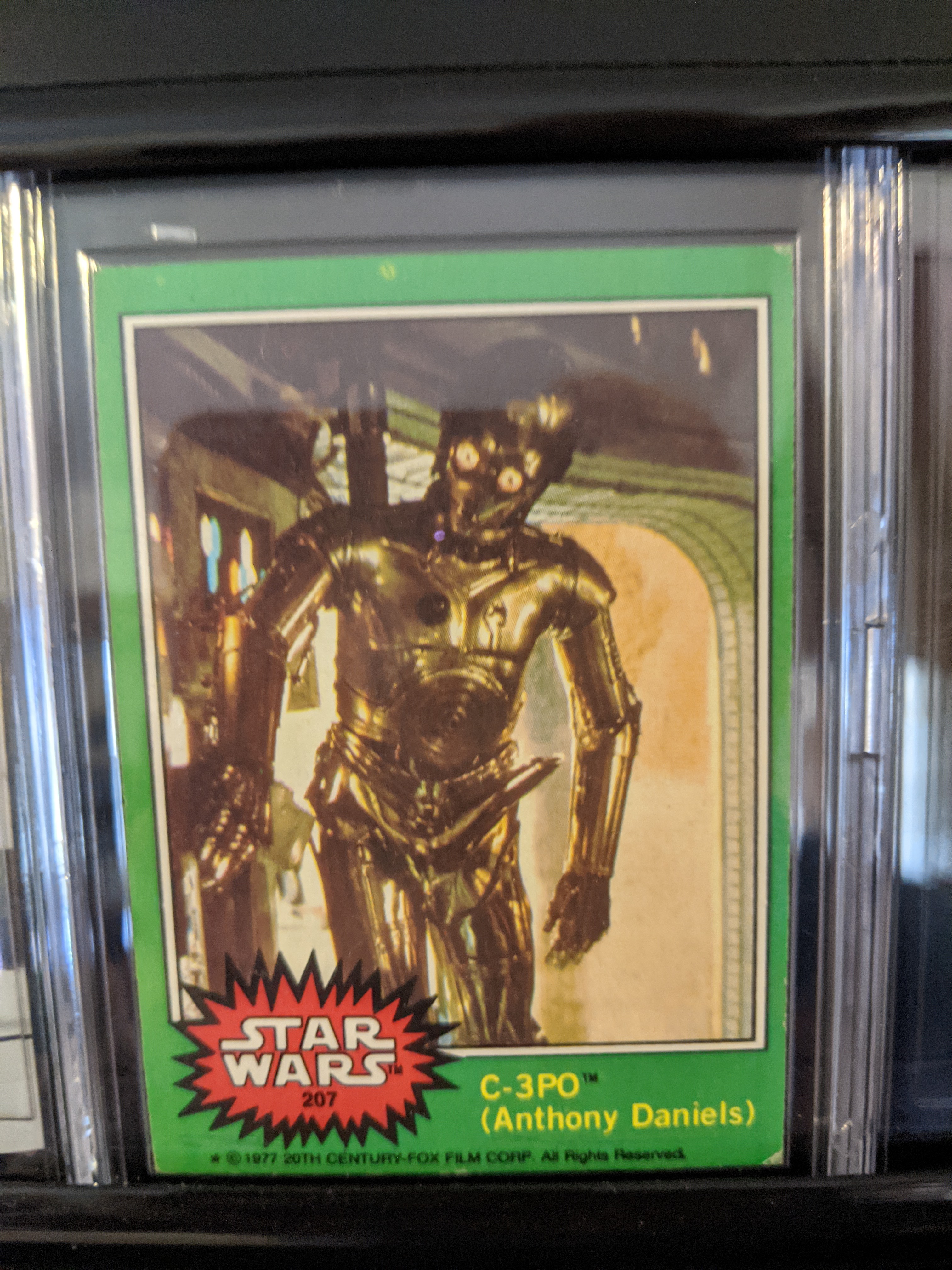 Did someone say 'Shining Pinnacle'? This is one of my most recent purchases, the "Goldenrod" C3PO 70's Star Wars card, and it is fairly expensive for a dick joke.  I would love one of one's Mark Hammil signed with random jokes, but I haven't found a single one for sale, much less within my budget.

That concludes my miniature tour.  If you have any additional suggestions, I would love to hear them, and I do have a list of other cards I wouldn't mind owning, but have no rush on. As long as the wacky world of sports continues to churn these out, I will keep picking them up, but once I reach 20 total, I will need a new case.