Look, I like to write. I'm also a massive procrastinator and felt enormous pressure to make an amazing blog full of pics and awesome content...But forget that! So, slightly overdue, here's my 2019 Reading Accomplishments! Apologies in advance as my reviews will be short and general, I can hardly recall each of the books! I will probably manage to post my 2019 gaming blog too. All bets are off for the 2020 versions, though.

4/10 - bought on a whim in Heathrow airport. Was an ok read. Nothing magical. I love Man vs. Wild, but this was more about Bear's coming of age vs. a travelogue.

2. The Devil All the Time, by Donald Ray Pollock

10/10 - It's a rare read when gothic novels are done right and this one came together perfectly. I haven't watched the Netflix movie, but this book was dark, depressing, and despite that, a very enjoyable read. Highly recommended.

10/10 - back to back gothic American novels by the same author was a risky prospect, but Pollock managed to keep things different enough in the stories to make them both enjoyable in their own ways. Still as dark and depressing as Devil All the Time, but a great read on its own right.

8/10 - Probably one of the earliest books I bought in my collection, and a decent enough read. I love the Spartans but tend to shy away from historical quasi-fiction, so it was interesting to see a fictionalization of that period and those people. I really enjoyed this one. Also this is where I started logging when I wrapped books to see how long each one took me.

8.5/10 - I really enjoy the Johannes Cabal series and this one was no different. It's interesting in that I often feel these books are very slow going, but when I'm done I'm always surprised at how much I enjoy them.

8.5/10 - The last of the Johannes Cabal series (that I'm aware of) and a fitting sendoff for the necromancer of some little infamy. I enjoyed the family dynamic here and Howard always manages to close off all loose ends in the plot come the finale. A wonderful series I'm sad to finish.

10/10 - I loved this one and it felt great picking the Tower series back up, knowing I was going to try and wrap it in 2019. It was easy enough jumping back into the world having read the last two books in 2018. Loved the plot.

4/10 - oof. I really didn't like 70% of this book. I just don't think the plot device worked well, and the bulk of the content was flat boring. The latter 30% or so was great, however - but it took a real slog to get there.

7/10 - Didn't do much but was an enjoyable and short read. A nice palette cleanser between the bulkier novels. Still worth reading.

9.8/10 - my favorite DT book behind the last one. The plot was amazing, all the characters had great advancement, and I couldn't wait to see what was going to happen. I took 0.2 off the score for some classing Kingsian cheese introduced near the end, but it didn't totally ruin things for me.

7/10 - I LOVED Howey's Wool series and felt he really turned the sci-fi genre on its head there. Beacon 23 was, like Wool, a collection of related shorts that ultimately lent themselves to a whole. I liked his exploration of PTSD in space, and it's short enough to read in a sitting or two. Not nearly as good as Wool, though.

12. The Road Back to You: An Enneagram Journey to Self-Discovery, by Ian Morgan Cron and Suzanne Stabile (fin. 9/9/19)

9/10 - Each year I usually end up reading at least one type of introspection book to better myself, or at least try to better understand myself and improve whatever I can. Idk where folks land on enneagram or if you've even heard of it - but I found it incredibly (scarily) accurate (when taking the full paid test) and useful. I only read the chapters that tied to my own numbers (9w1), so it wasn't a terribly long read - but I found it insightful. I'd love to talk to anyone in the community about it if you've already read about enneagram or are curious. I'm a novice for sure but know enough to be dangerous.

9/10 - Tbh I've never seen the movie, so was really interested to read this, then Doctor Sleep, then watch both films. I've wrapped both books (Doctor Sleep in 2020), but still haven't watched them. I really liked the story here and the characterization of Jack. Also a fascinating read in the differences between the book and film. Classic King.

7/10 - I normally don't jump on newly released books mainly from a cost perspective, but bought this on sale at Target one day. It's very long and, unfortunately, pretty slow going. This would've been a 9/10 but I felt the ending fell pretty flat for me. Not King's best, or worst. An OK book.

8/10 - The penultimate DT book, this one got real weird. I enjoyed it and felt the plot remained interesting and, somehow, King turns 700 pages into a breezy read.

11/10 - the grand finale and finished with time to spare in the year. I adored this book and unfortunately to delve into plot would be spoiler heavy. Needless to say, loved it to pieces and was gutted to finally say goodbye to the characters and world. An amazing finish to my year in reading. 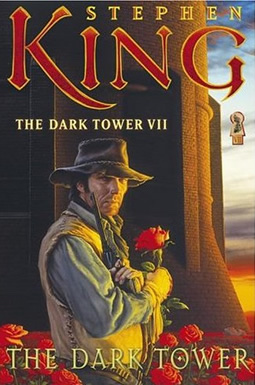 OK, I'm cheating a bit here, but 2019 was The Year of Stephen King for me, and I loved all of it. I guess if I had to pick one, it'd be Dark Tower VII as a masterful way to wrap this amazing series. It did make me sad to finish, though, especially after spending most of the year with the characters. I know some folks are iffy on King and this series in particular, but goddamn did I love it. And hoo boy could I not have anticipated what 2020 had in store - perhaps I wouldn't have asked for The Stand for Christmas 2019 if I did, lol.

At least my favorite quote from the series is just as applicable now as it was when it was written: "We spread the time as we can, but in the end the world takes it all back."

- ~ I have to return some videotapes ~