Traveller In Playtime – Ratchet & Clank: Up Your Arsenal

Ratchet & Clank: Up Your Arsenal (or Ratchet & Clank 3) is a third-person shooter with platforming elements developed by Insomniac Games and published by Sony for the PS2 in 2004. It was also shoddily ported to PS3 in 2012 by Idol Minds as part of the Ratchet & Clank Collection, with a Vita port of that by Mass Media Inc being published in 2014.

Following the events of Going Commando, Ratchet & Clank see on the news that Ratchet's home planet is being invaded by the Tyhrranoids. Determined to stop them, they travel back to the Solana galaxy where Ratchet joins up with the Galactic Rangers in order to stop the Tyhrranoids and their leader, Dr. Nefarious. 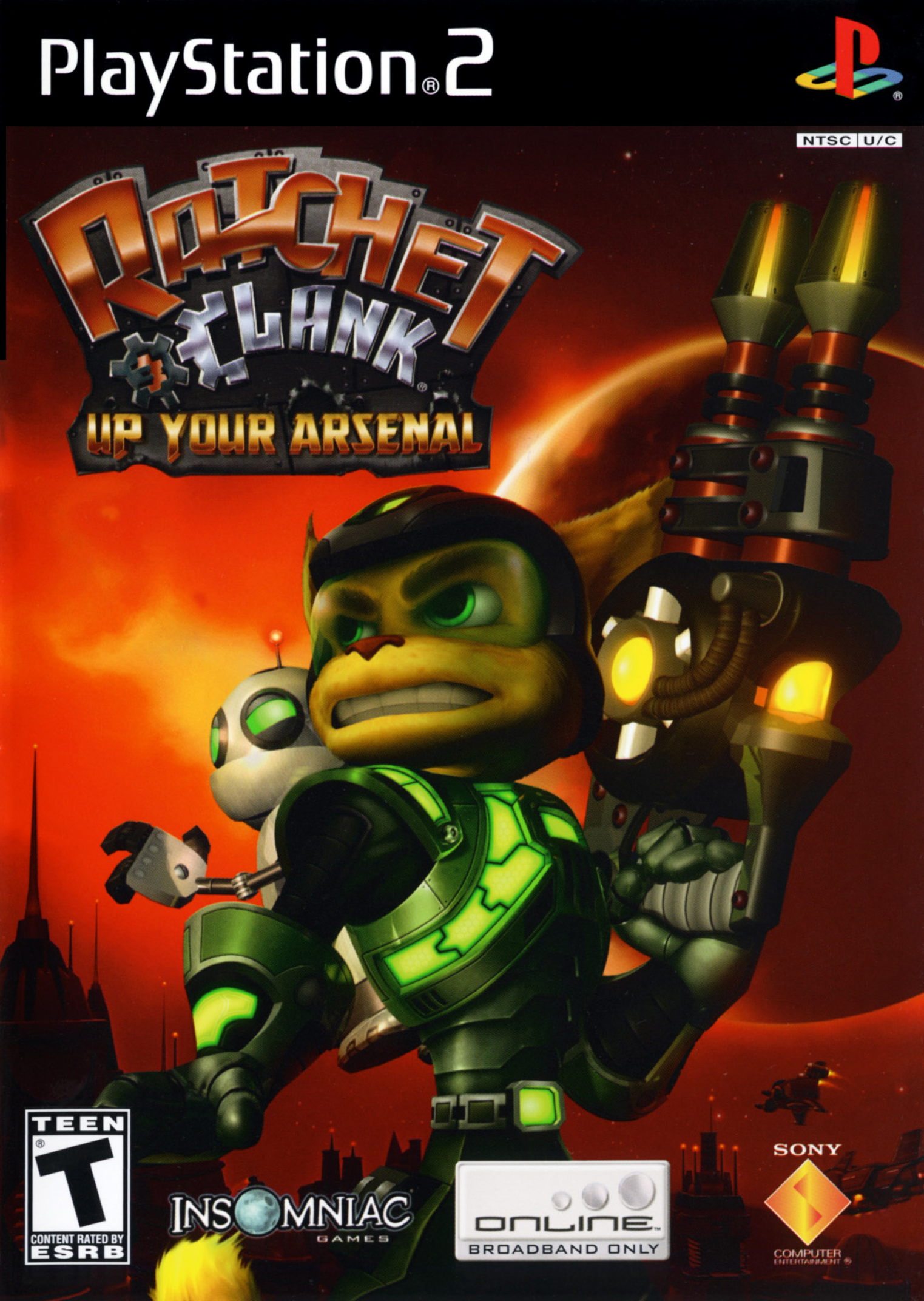 Continuing from his arc in the first two games, Ratchet has now fully completed his transformation from a selfish jerk into a self-less space hero. Barring wanting revenge for his home planet getting invaded (which is an element of the story that's mostly ignored, which is a bit of a shame), he spends most of his time concerned with the safety of the galaxy. It's nice, even if there isn't much to grab onto most of the time.

In order to mitigate his status as a walking backpack, Clank has been given a starring role in a James Bond parody movie series in this game. It doesn't really add much to his character, but it's a fun side story that gives him a good angle when interacting with the villains, as Dr. Nefarious can't separate the character of Agent Clank from the person playing him.

Nefarious himself is a treat and a half. While he isn't as threatening as Chairman Drek from the first game, he is absolutely hilarious and steals every scene he's in. Armin Shimerman's performance is excellent and brought to its fullest due to Nefarious having both his butler (voiced by Micael Bell, who also does a great job) and Captain Qwark as comedic foils. Not a scene goes by without him screaming at one of them due to something silly. 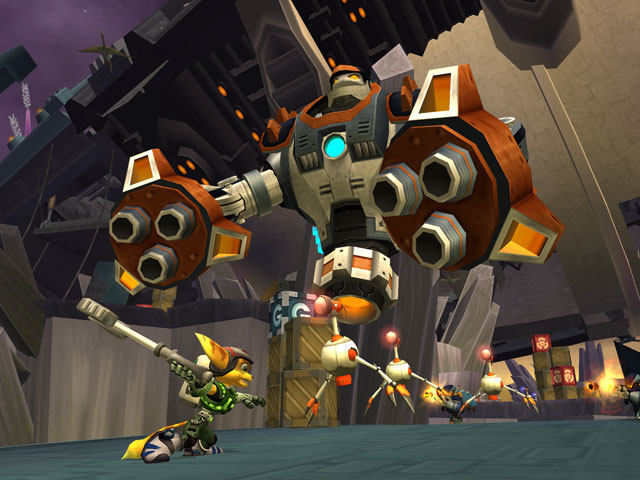 Speaking of Captain Qwark, the game is actually more centered around him and Nefarious over our titular characters. A lot of time is spent exploring the shared history of the two (it's really stupid) and why Nefarious hates him so much. There's even a little bit of pathos due to that, which was lacking in the last game, especially compared to the first. The end result is enjoyable, hilarious and a tiny tiny tiny bit heartfelt. No clue why they felt the need to bring back Skidd McMarx of all people though.

No, Up YOUR Arsenal

While the shift from 2 to 3 isn't as big as the shift from 1 to 2 was, key refinements have still been made. You now have access to alternate aiming modes from the start, with the options being to play the game in first-person mode or in a more modern third-person mode with a dedicated aiming reticule should you wish. The new control schemes work well, but I still prefer the standard controls where you strafe on command and use generous auto-aim like in Going Commando.

As per the title, the guns are now even more ludicrous, as the upgrade system is more gradient, making for 4 upgrades (plus 4 more in NG+) per weapon. This means that you get more gradual upgrades faster instead of a single huge upgrade, making it more rewarding to use the guns. As they upgrade, they become more powerful and aquire new special properties, like greater range, faster firing speed or extra explosions. It's a great fine-tuning of the previous game's upgrade system and became the series standard going forward.

Beyond that, there really isn't much more to say, as beyond some new crates (which grant bonus bolts or invincibility), a new melée weapon and a smaller focus on puzzles and gadgets, it's the same general formula of moving forward and blowing everything to bits. The gadgets are still there of course, but the hacking is now a shooting minigame (that can get rather tedious) and there aren't that many dedicated puzzle sections. Hell, one gadget only gets used on a single planet! Still, what's there provides a good pacebreaker without dragging the pacing down. 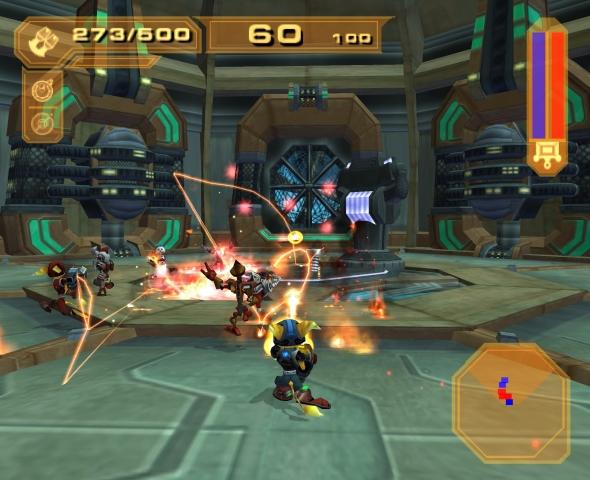 While the game is set in the Solana galaxy just like the first game, there are only three returning planets, one of which is barely recognizable due to the change in time-of-day. As such, we get a healthy supply of new planets to explore and blow to bits (which include awesome new tracks by David Bergeaud). With the addition of a few proper setpieces and a larger focus on shooting, the exploration aspect of having multiple paths on planets has mostly gone out of focus.

There are still some planets with multiple paths and good extras, but swimming as a mechanic is almost completely ignored this time around. I can't say I miss it, but it hasn't been replaced with anything else, making level design slightly less diverse. The mix of shooting and non-shooting is still very palpatable of course, but it's easy to see the groundwork for Deadlocked in this game, which focused almost exclusively on shooting.

One great addition to the game, which hasn't been replicated since (no, Full Frontal Assault does not count) is the Starship Phoenix. This is the HQ of the Galactic Rangers and the game's hub, which collects a bunch of tertiary things that are nice to have in a singular location, like a VR arena that lets you test weapons, an armor vendor and a game console for playing Vid-Comics starring Captain Qwark. But above all, it's nice to poke around and hear some casual dialogue between the crewmembers. Other games have of course done this better, as you can't speak with people directly to talk about the current objective, nor is there a room for you to customize. 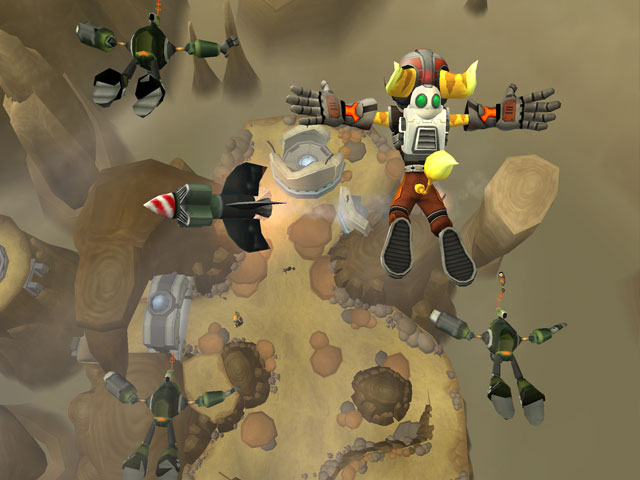 The faceless robotic rangers aren't directly involved in the plot and are instead delegated to special missions where certain multiplayer maps are transformed into a sort of campaign against the Tyhrranoids. The goal of each campaign is often to destroy an enemy base, which you achieve by completing a linear set of missions. These missions usually involve making advances towards certain locations, taking over nodes or piloting the new hovership.

It's all pretty good, but it is where the game leans the most into its shooter aspect, as the rangers are the only characters that give these levels life and the exploration is at its worst. Still, as a mere extra way to earn bolts inbetween regular levels while hanging out with the easily terrified rangers, it's pretty swell.