We've all seen the games on mobile and PC at some point or another. Games where all you do is click or tap on your screen to earn money. With that money you buy upgrades to make more money...more money, more upgrades....earn enough upgrades and reset the whole game, and do it all over again for more money. Why would anyone make these kinds of games? Who knows, but it mysteriously works and people just can't help to play them! Progress Quest taught you how to read roman numerals

My first exposure to idle games dates way back sometime in the early 2000s when I came across a (extremely) simple game known as Progress Quest. It started out as a simple Windows program where you enter your character name, race, and class. Next, your character will go out on an adventure killing a variety of monsters, earning and selling items, upgrade equipment, going on a variety of quests to further plot development. Sounds like a pretty basic RPG game, doesn't it? There's just one little catch...it was ENTIRELY automated! The most interaction you did was character creation, afterwards you let the "game" run its course with a variety of progress bars moving to the right at various speeds. The game lists out your equipment, items, spells, quests, and how much of the "story" you've completed. However none of it really matters because it was just doing its own little thing while you sit there idly watching bars going across the screen.

To my knowledge this was probably the very first game of its kind and it wouldn't be until almost 10 years later that a similar game called Godville would be released. It was pretty much a slightly flashier version of Progress Quest, but was only released on mobile as well as a web based game. These games were known as "Zero-Player" games back then as the emphasis was basically naming a character, and then the game would just play on its own automatically where you had no say on what the character would do. 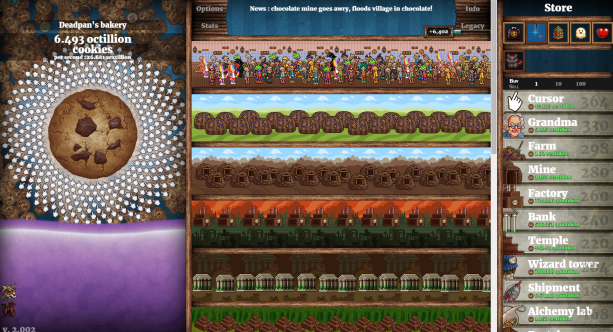 Grandma can help you make cookies...but it's said she has a short temper...

2013 saw the release of the more modern day idle game Cookie Clicker. It was a pretty (low-key) major release in gaming as millions of people logged in and clicked away at cookies to trade in for grandmas, farms, mines, wizard towers, and even portals. Now I say it was low-key because while millions of people played the game when it first released, there was very little talk about the game. I'd say it became a huge guilty pleasure amongst gamers at the time. On paper, it just seemed like a huge waste of time, yet it was a waste of time that they couldn't pull themselves away from. It was tough to admit you were addicted to a game where you clicked on a cookie and bought upgrades to earn more cookies. There was little point to the game...just click and earn cookies nonstop!

As years went by, more and more clicker and idle games came out. I personally have gone through quite a number of them including Clicker Heroes, Adventure Capitalist (and currently playing Adventure Communist), Realm Grinder, Melvor Idle, and NGU IDLE. There're hundreds to choose from on Kongregate and Steam (some free, some pay), as well as hundreds more on mobile. I don't exactly know why they're so addicting, especially when I play them myself. It could be the feeling of progression, growth? Knowing there's more to discover the longer I play? The feeling of relief when I find the "end" of all the countless buying and upgrading and restarting? Yes, there are endings to some of these, but despite the endless gameplay, there will come a time when there are no more upgrades to make the game go faster, and thus the end has been reached. I'd say Adventure Capitalist would be the easiest game to reach the end as it feels like the developer hasn't really done much to add more content to the game, just seasonal events. 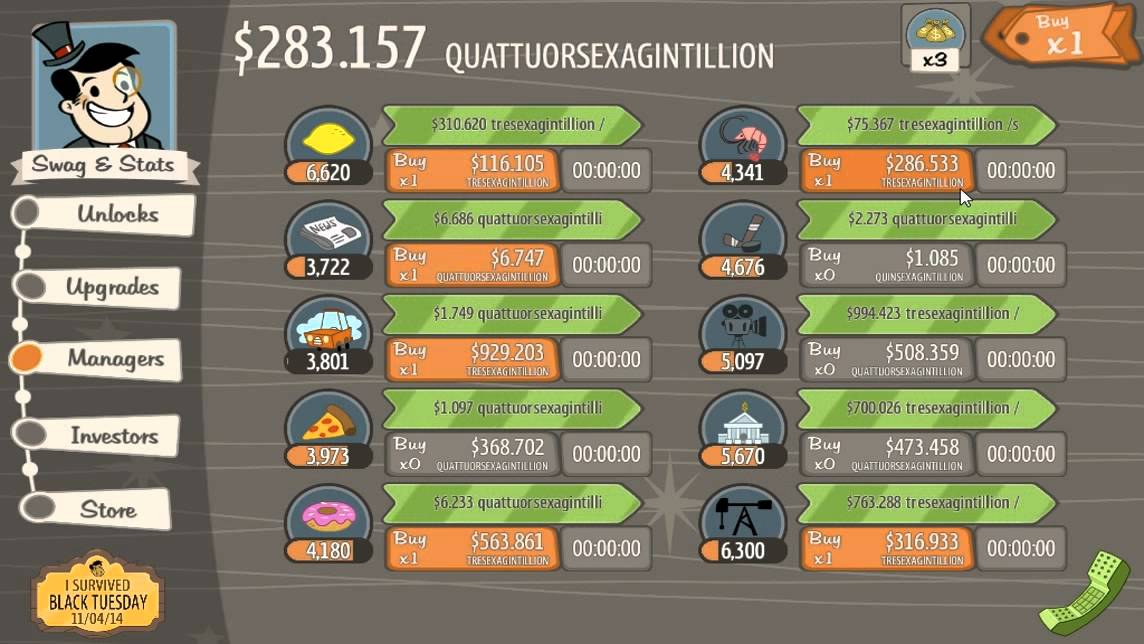 Go from selling lemons to settling on Mars!

If there's anything you can remotely learn from these games, it is math. Almost every idle and clicker game use the same formula when it comes to numbers. Knowing the difference between an Octodecillion and a Trigintillion is about as complicated as 1.00e57 and 1.00e93. You'll see them everywhere, and you may even start to memorize them to the point that you could probably recite them in your head if you wanted.