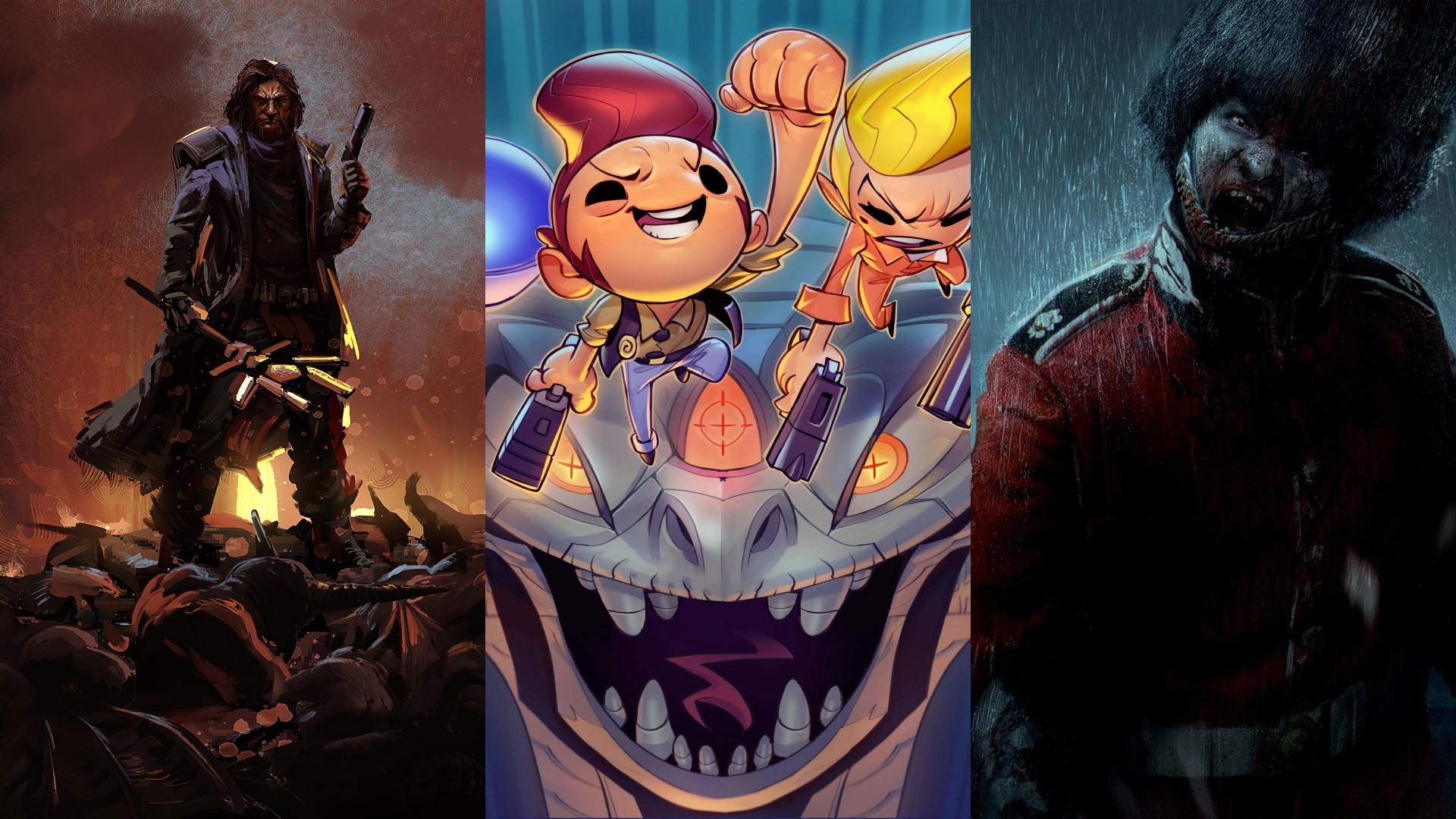 Project Warlock is first-person shooter in the aesthetic of classic Doom.

It can be hard to keep up with all of the modern shooters with retro inspirations coming out, so what does this game do to set itself apart from the crowd? Honestly, not much, but there are still some unique parts to it. The biggest difference from other retro shooters is the game’s light RPG elements. The main character levels up as you play, and each level gives you an unlock point to spend on character upgrades like stat boosts and class unlocks that have their own bonuses. These upgrades give gameplay variety that isn’t really in other modern retro shooters, but I personally didn’t find them significant enough for me to play this game any differently from other shooters. Another form of upgrades and unlocks are for weapon upgrades and new spells. The spells—another unique element in this game—are fun to try out and unlock even if a lot of them are basic abilities like freezing enemies or summoning a shield, but the weapon upgrades requires a choice between two options for each weapon and locks that choice in, which I think doesn’t make sense. The RPG elements and spells are unique to this style of game, but all of it feels rather basic compared to other games, and I don’t think it does enough to change the retro shooter dynamic.

One thing I found fun with this game are its unique locations. One moment, you are in an arctic station similar to The Thing, and the next, you are in the Pyramids. The game goes all over the place, and each has their own enemy types and level designs. Some of the areas like the city are more open levels that I liked a lot, but other places like the dungeons are super tight and maze-like, which I didn’t enjoy as much. Even the most maze-like levels, however, weren’t too difficult for me to navigate because each “level” actually consists of few smaller levels with a little less complexity, which I prefer compared to overly-complicated singular levels of other retro shooters. 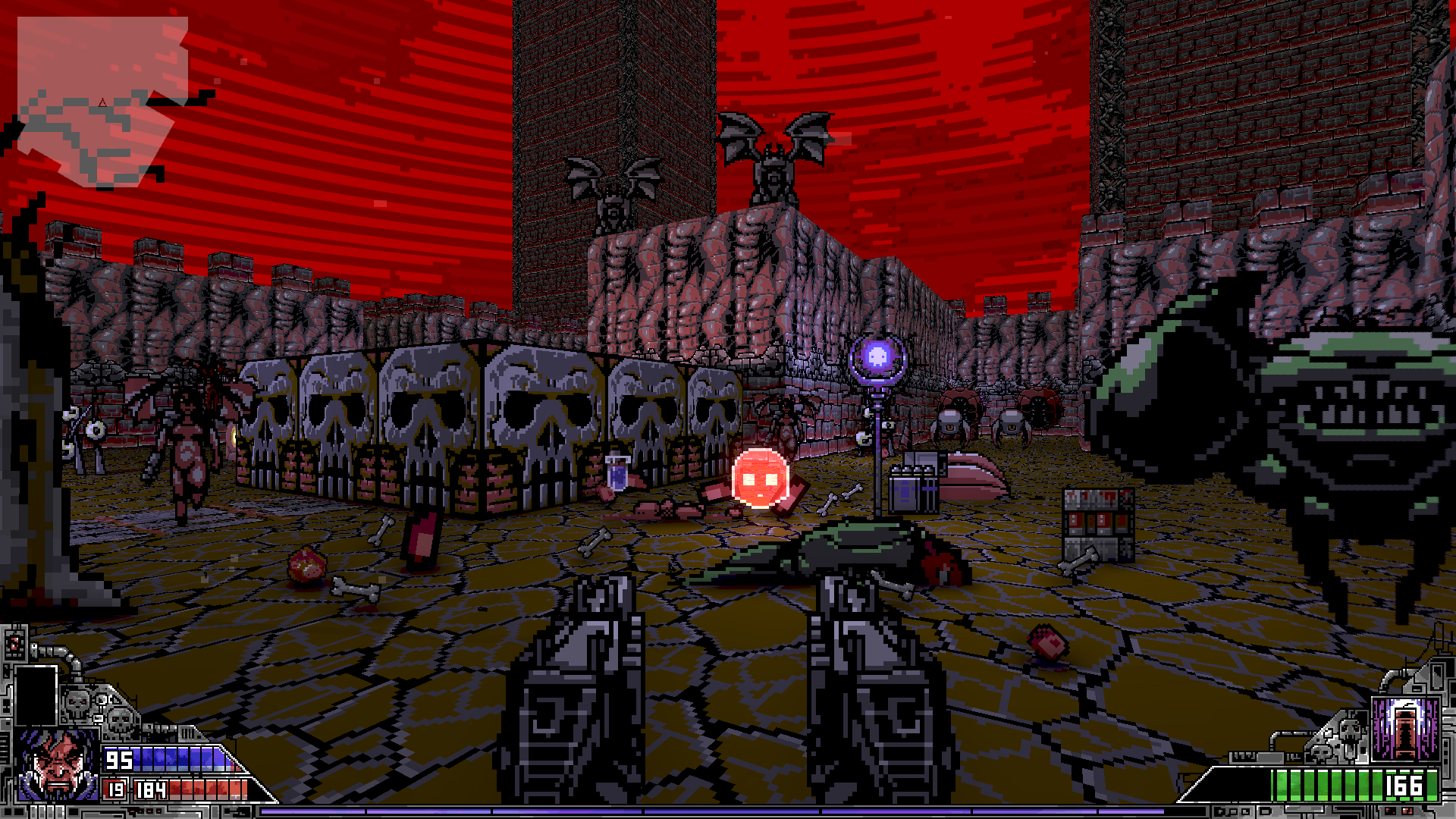 Each area has its own themed locations and enemies.

Outside of the RPG elements and level design, there isn’t much else to say about this game. I like the game’s mix of pixelated art with modern lighting, I think the game goes on for too long though I think this game is easier to drop at any point than others, I wish this game had armor pickups, and I think this game nails the feel of the shotgun like any good retro shooter should, but that’s about it. If you have played either retro shooters or modern retro shooters, then this game will be familiar to you. It isn’t a bad thing, but it’s also hard to say why this game is worth your time compared to other games unless you really like playing all retro shooters.

Whether or not this game is for you depends on how much you like retro shooters like Doom. I like retro and modern retro shooters, but I am also beginning to find this subgenre tiring. There are some things this in this game that are unique, but I don’t think it’s enough. For $12, I think the game is worth checking out if you are looking for a retro shooter or want to try one out for the first time considering its more modern sensibilities.

Exit the Gungeon is the logical conclusion to Enter the Gungeon that follows the Gungeoneers as they try to escape the collapsing Gungeon.

While both this game and the last are rogue-lites, Exit the Gungeon changes things up by being a 2D platformer instead of a top-down twin-stick shooter like the last game. Many people see this change as well as its smaller scope as a downgrade, but this game excited me more than Enter the Gungeon because of how similar it is compared to Super Crate Box, one of my top favorite arcade games. It’s not one-to-one with that game, but it feels like if Super Crate Box was a different genre, which is good enough for me.

In this game, you jump around a platform and try to survive an onslaught of enemies with a gun that is constantly changing. As the run goes on, you encounter bosses to fight, and the game in general gets more and more difficult. There are also some stops along the way that range from talking to new characters to the shopkeep and even to static platform combat segments. While there aren’t crates around the platform to pick up (which I think is what makes Super Crate Box so great), you are trying to handle enemies while also dealing with changing weapons on a single-frame platform. It isn’t as fun without the crates, but this game excels in other places. 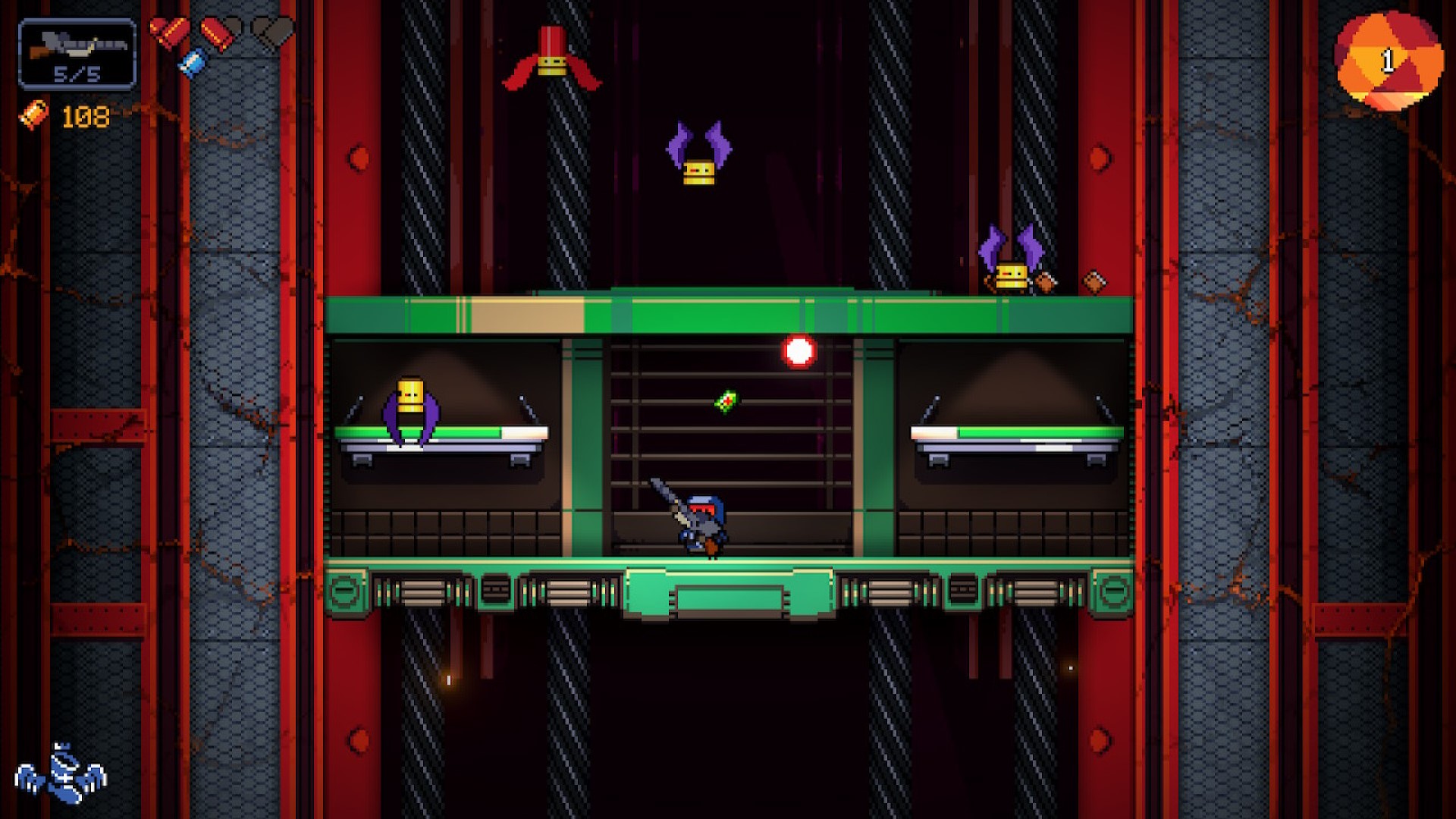 The shift from top-down to platformer feels surprisingly natural for this game.

For starters, one thing this (and Enter the Gungeon) nails are the wide variety of weapons that are fun to use and are unique from each other. A lot of the enemies translate well to the new perspective, with exception being bosses who can feel overwhelming and impossible at-times. There are different characters with different abilities, with my favorite being a woman with a dog who travels around the platform and picks up money. Finally, this game has a form of progression in the form of filling out a compendium that gives reason to go back and play more.

Exit the Gungeon didn’t quite hook me like Super Crate Box, but I still think it’s a solid rogue-lite to check out. Fans of the endless arcade game will find some welcoming similarities with this game, and I think the vast arsenal of weapons and fun platforming is worth checking out for those looking for a new rogue-lite.

Zombi is the re-release of ZombiU and is a first-person survival horror game following a survivor trying to survive a zombie outbreak in London.

ZombiU was my first Wii-U game back when I was young enough to think having M-rated games was edgy and cool, and I remember having fond memories playing through the game and smashing zombie brains in. I’m not a fan of reviewing games I have already played because nostalgia can plague my current thoughts, but it’s been so long since I last played this game that I thought I would check it out again. While the game is nothing special, it is at least a fun zombie game that scratched a survival horror itch left by the Resident Evil games.

In terms of being a survival horror game, this game isn’t anything new. Low ammo counts, hints of Metroidvania style level design, individual zombies being a threat, slower movement, inventory management, and more can all be found here. There are some fun things around the edges of these survival horror tropes, however, that gives this game a bit of an identity. The big one is a scanner, which can be used to identify zombies, doors, items, say if zombies or cabinets can be looted, and more. Being able to scan objects for later reference helped with reducing loot time and better item cataloguing, which I think is really helpful for a game like this. In this game, doing various interactions like looking through your inventory or looting doesn’t pause the game, which I think adds a tension to doing anything in the game. There are multiple zombie types like one that spits vomit or one that calls other zombies to it that aren’t anything special, but are still fun to deal with. Finally, I found the epilogue in this game to be a particularly tense and enjoyable moment compared to other survival horror games. 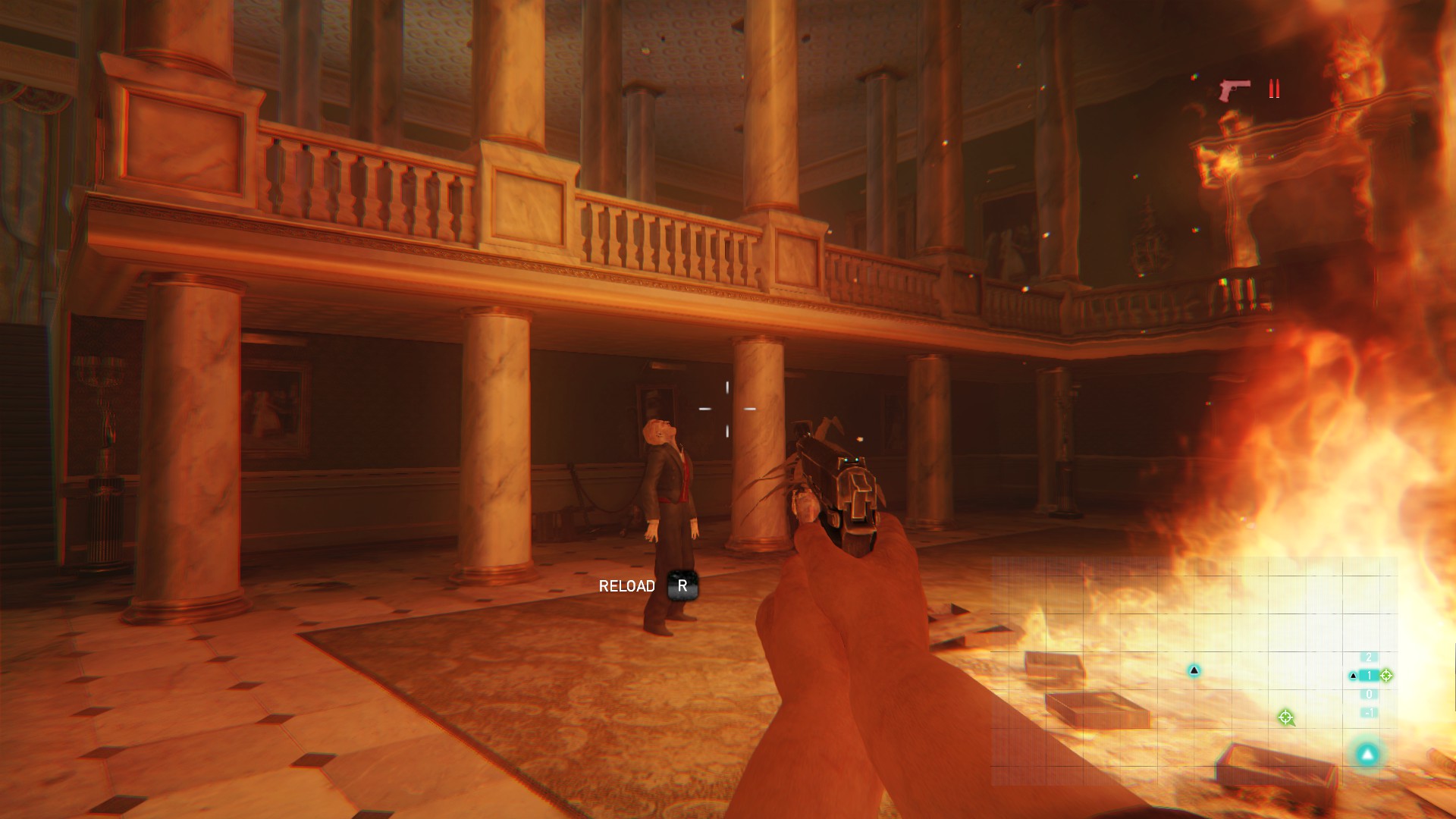 As tiring as the zombie genre can be, it’s still fun to bust some heads.

While this game is at the very least a serviceable survival horror game, there are some issues worth noting. For starters, this version of the game removed the multiplayer mode from the original game. From what I remember, it was a local-only mode, but it still would’ve been nice to have that mode available. For a game where health, stamina, and ammo matters, it was hard to tell how much ammo was in each weapon, and there’s no stamina meter. There are quite a few weapons to find in this game, but for some reason you cannot drop the default pistol and melee weapon from your loadout. The Prepper, who guides you through the game, is always mad at you for trying to leave and survive on your own, even though his entire existence as a character is to teach you how to survive on your own. Finally, this game has some technical issues like bad ragdolling, some glitches here-and-there, zombies de-spawning too fast and taking my crossbow bolts with them, and not many graphical settings.

Zombi is a pretty good survival horror experience, but don’t expect anything unique or spectacular. It’s a good game to scratch a zombie or survival horror itch, but I would go into this game with the expectations of a 2012 WiiU game.