If there's one thing Ubisoft deserves credit for, it's for their remarkable handling of the Far Cry franchise. While I'm not the biggest fan of the 2004 original I still give it props for being one hell of a landmark title in it's day, easily capable of going toe to toe with games like Doom 3 and Half Life 2 on a technical level. As a studio's debut game it wasn't half bad, and Crytek would go on to do a great job building upon and refining its formula over the years, though their second crack at something like Far Cry didn't come in the form of a proper sequel. Not long after release Crytek was approached by EA to work on a little game called Crysis while their former publisher was left to pick up the pieces, and though Ubisoft Montreal did a great job with their console reimaginings, it wasn't really clear where the series would go from there. What could Ubisoft even do with the Far Cry franchise when the team responsible for the PC original had since moved on to bigger and better projects?

The answer to that would later come in the form of a mandate from on high, suggesting to Ubisoft Montreal that they instead focus on re-inventing the franchise. Since the original game had its fair share of flaws and most players didn't like the approach the game took in its second half, might as well take the opportunity sooner than rather than later, right? So the story of Jack and the Trigen would reach its abrupt conclusion, the open but linear level design was scrapped, and damn near everything from the first game save for it's exotic setting was abandoned. In it's place was a new, realistic, open-world approach, set across the backdrop of a war torn African country. 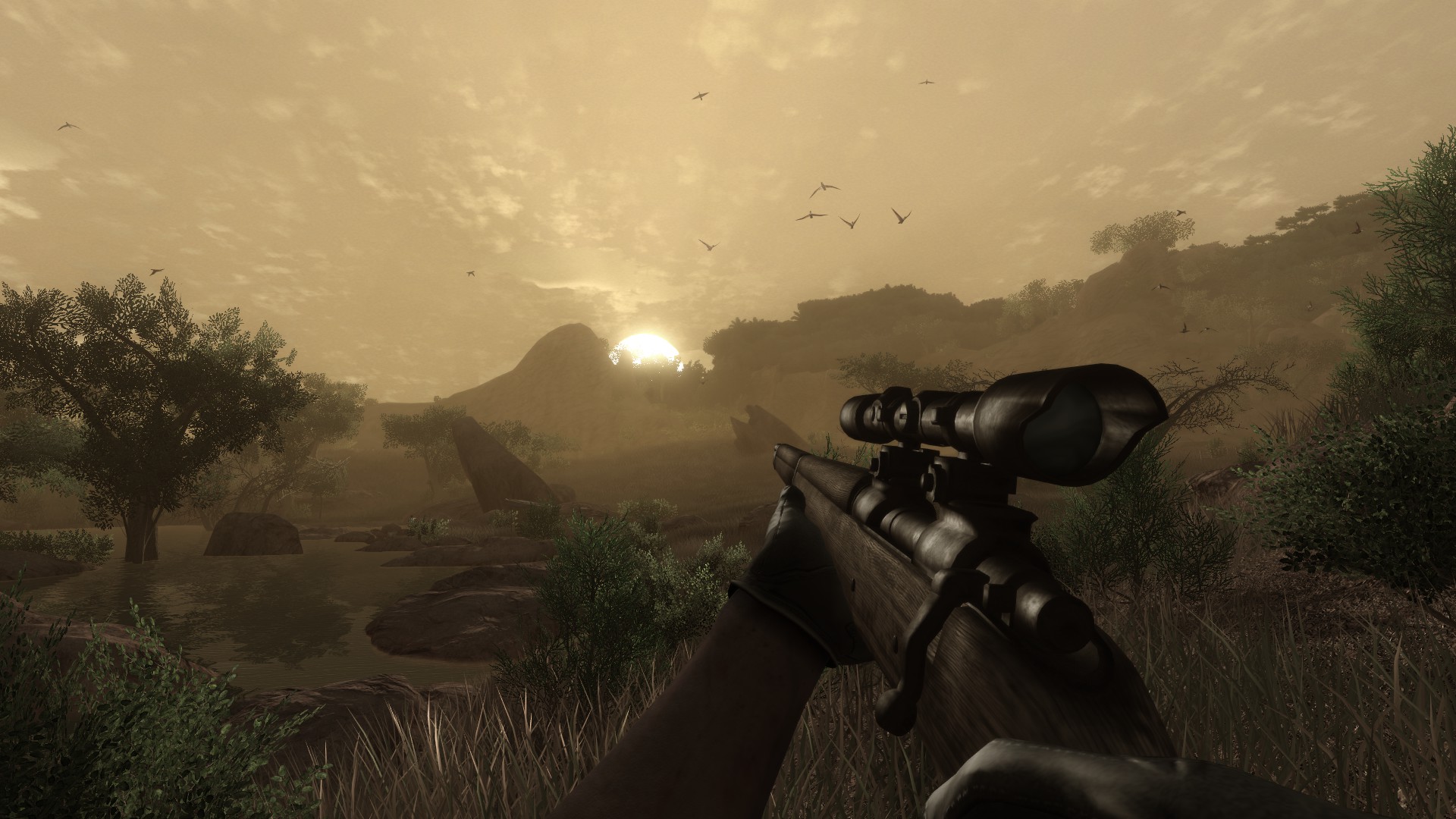 Rather than carry from on the campy tone of the original, Far Cry 2 instead takes on a more grounded approach. Your character, a random mercenary, arrives in Africa with only one goal in mind, to take out an arms dealer known only as "The Jackal". Sounds like a simple job at first, but not long after arriving your character comes down with a bad case of malaria and is left bedridden in some dingy old motel. The Jackal himself even shows up to pay your character a visit, noting that thanks to this collosal screw up they're basically fired, and no longer his problem. He thankfully left behind a pistol for you to use as the very next day the town immediately descends into chaos, forcing your character to flee. As a now-jobless mercenary stranded in a far away land, its up to you to fend for yourself and make money the only way you know how, selling your services to the highest bidder. In this case, your customers are two warring factions ready to push this country to its breaking point.

Its a great premise that unfortunately tends to stumble in its execution. The game's first act is fairly dull and doesn't really go anywhere, you'll get introduced to some fellow mercs willing to help, the two factions who'll do business with you (APR and UFLL), but its not really clear what its all leading up to. They're both fighting for control of this country but your character's just standing in the middle doing odd jobs for both of them, and not much of importance really happens during this time. Being an open world game only hurts the pacing here as Far Cry 2's opening act is as short or as long as you want it to be. In my case, it was only after 10 hours (roughly 30-40% of the story missions mixed in with plenty of exploration and side content) that the game finally started to pick up steam, when you really start to feel consequences for your actions after taking out a certain target. Certain characters are revealed to have more going on than what meets the eye, and the lack of a clear cut good or evil side in favor of a more grey area  adds more believability to the world.

Things generally pick up once you reach the second map, with your character now being paid to start false flag operations or starting a war during peace time, basically setting fire to an already delicate situation. It all culminates into one hell of a finale, one that's still worth experiencing for determined players, though not for everyone as the journey to get there can admittedly be quite the slog. 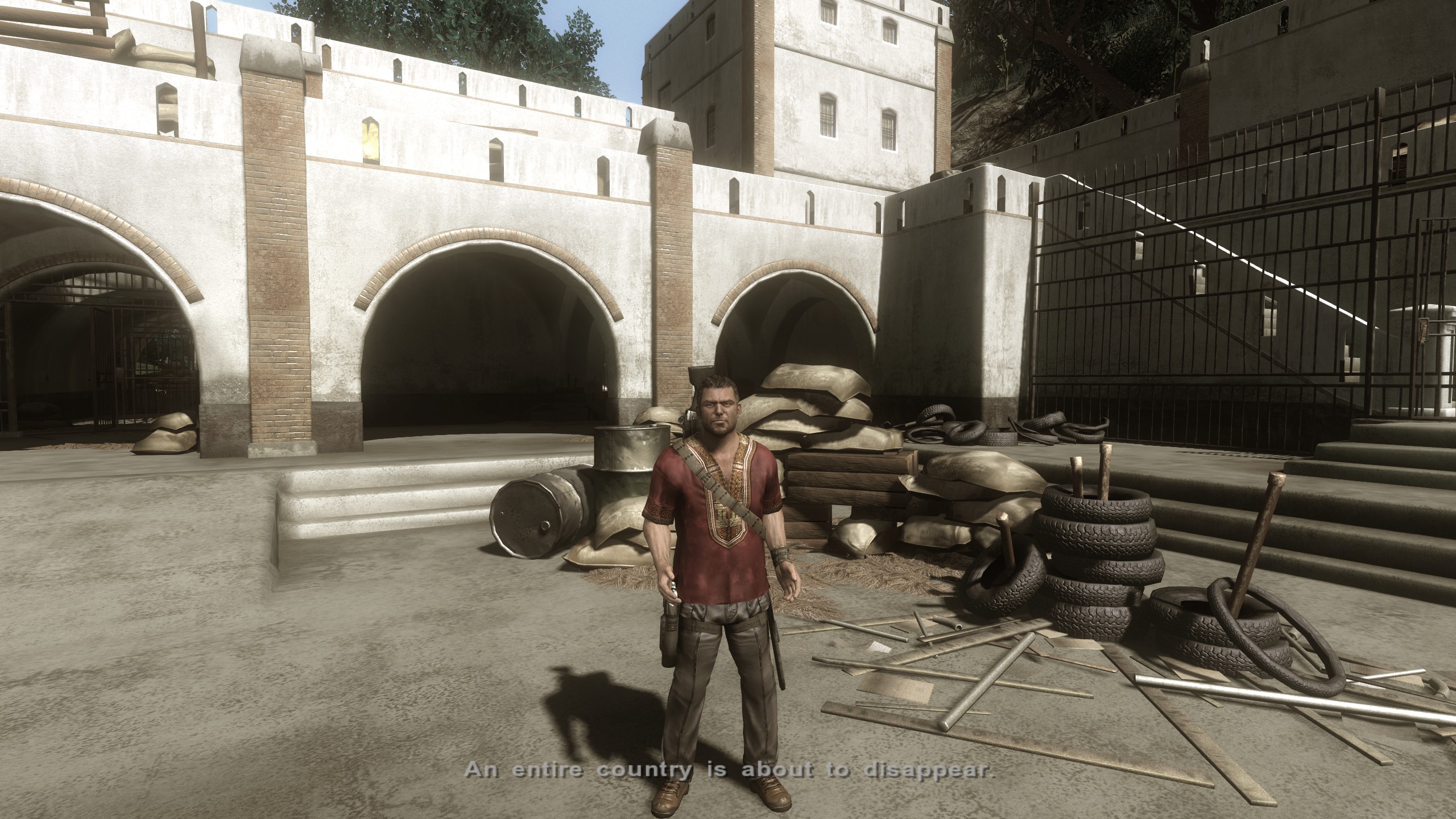 The main issue that plagues Far Cry 2 is a lack of variety, what you'll do in the first few hours is mostly what you'll doing be doing by hour 15. Main to even side missions are mostly variants of "go here and blow something up/kill a specific target", and while this is standard practice for open world games the non stop firefights you get into on the way to your destination really drag down the experience. Enemies are always aggressive, and while its cool that they'll presistently follow you for miles and miles or try to run you over, their behaviour and weapon choices really dont change that much, save for introducing mortar strikes in the second map. They also respawn at an incredible rate, which at least makes the world feel lively compared to Far Cry 3/4 where enemies stop showing up the more and more outposts you capture. At the same time, going through the same song and dance every time you step outside really gets stale. Even with fast travel, the amount of driving you have to do with the same "Stop, change to turret to take out enemies, back to driving, repeat" routine gets old quickly.

Thankfully everything else about Far Cry 2's gameplay is solid. The quality of life improvements make for a far less frustrating experience compared to the original game, with quick saves being added, machetes no longer taking up precious gun slots, and improved vehicle handling on top of being able to repair them whenever, instead of Far Cry 1's method of having them explode when they take too much damage. You can eventually upgrade your character to carry up to 6 syringe kits and thankfully health kits and ammo stashes are more common to stumble across in the wild than most of Far Cry 1's levels, but if you do manage to lose all HP there's a chance that you'll be rescued by some buddies in the wild, and thankfully their AI is capable of mostly handling themselves. 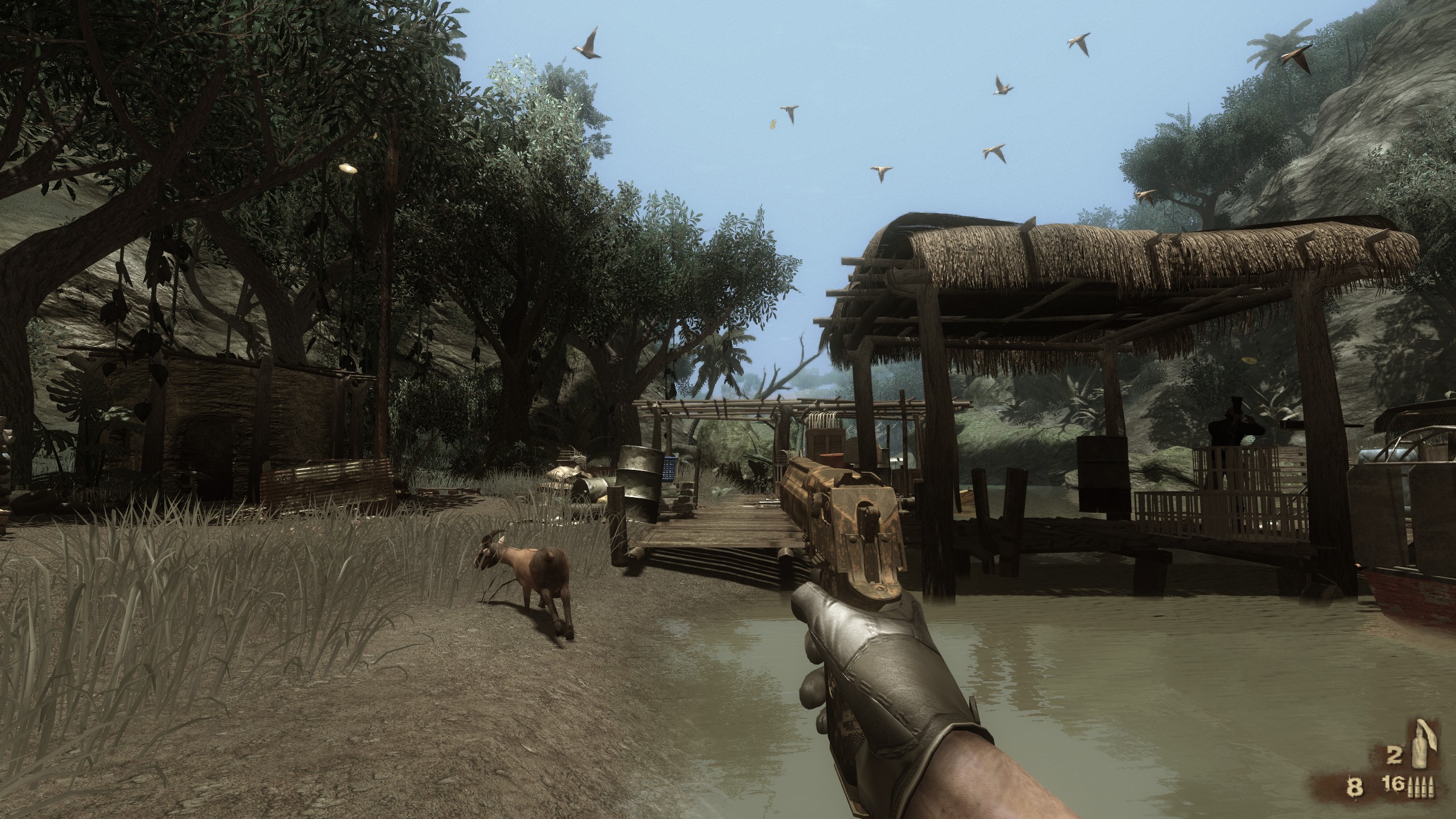 Weapons feel satisfying to use, and most importantly there's no real right or wrong combination to worry about. Some missions will of course favor certain loadouts, but for the most part they're all equally viable, and weapon jamming/durability makes it to where you can't kick back and just breeze through the game on autopilot. You'll also have to keep track of how many pills your character has for their illness, which can be replinished only be helping out a group of innocent civilians known as The Underground. Give them some passports and they'll give you some more medication to keep going, and while its a bit annoying having to go out of your way to do some missions, the Malaria thing isn't as painful as I was lead to believe.

And while I ragged on about the lackluster mission variety, some story missions are genuinely incredible, like one where you're forced to choose whether to help your friends at the bar or help civilians escape as enemies pour into the church. And there's of course there's one at the mid point where one of the towns immediately turns into a crossfire between factions and you're caught up in the middle. These kinds of missions are certainly few and far in between, but they're something that really stuck with me even after all this time. 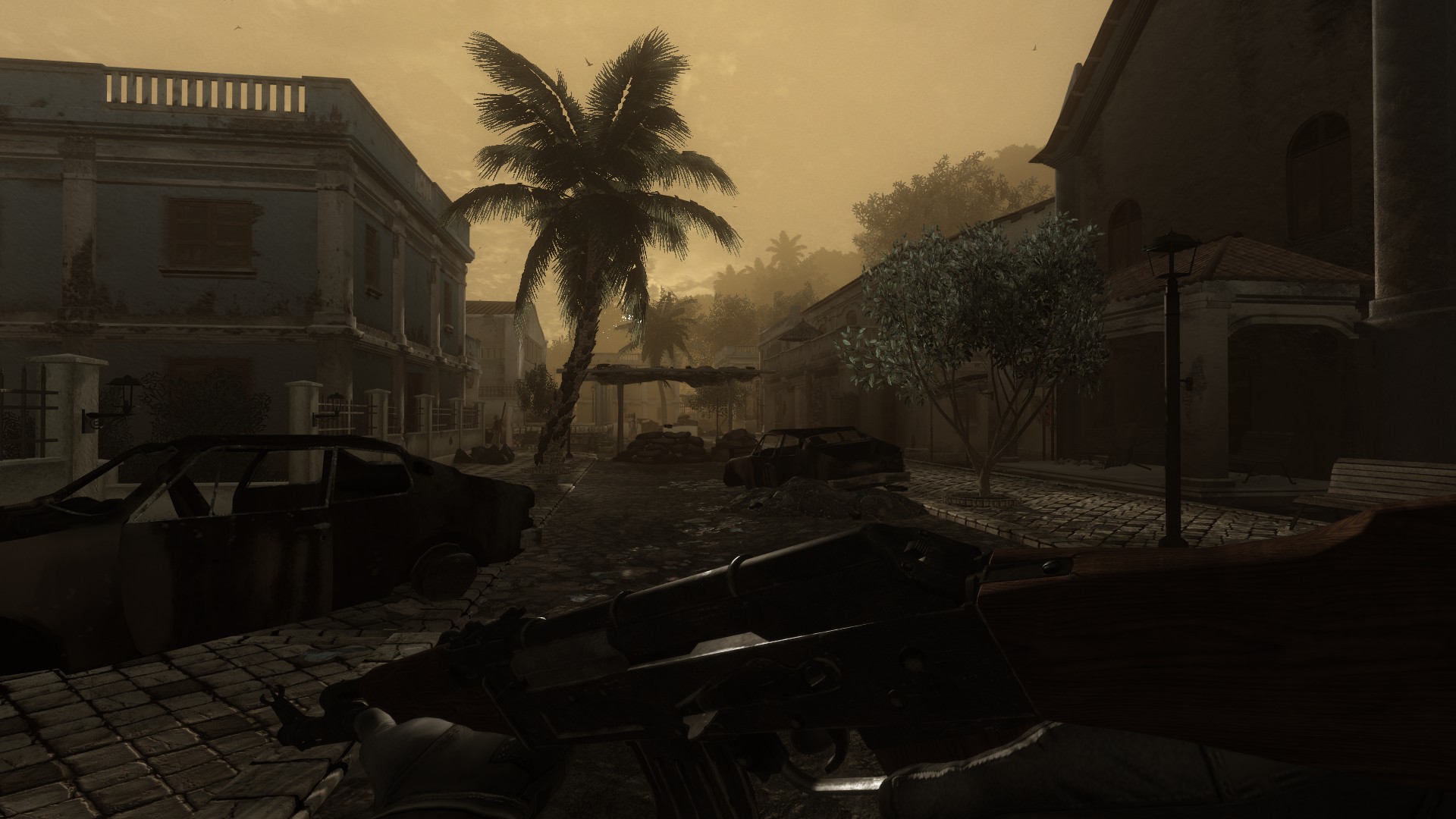 The world of Far Cry 2 though is easily the game's greatest strength. Ubisoft is known for their attention to detail with their open world games, and even back in 2008 that still applies here. Africa is a gorgeous setting with numerous biomes and some gorgeous cliffsides, it just gives off this "rough beauty" kind of feeling to it. I'm not sure how else to describe it beyond the fact that it just makes for a great setting in a video game, it clearly shows that the team behind it were passionate about what they were making. I still would've loved to see them do a bit more with it though, like having more aggressive wildlife to deal with as I've mainly encountered zebras and deers during my playthough, a game like this is crying for a re-imagining with modern day tech. Africa along with places like Central America really aren't touched upon much as a central location in current AAA video games, which is a shame since the bright and colorful settings and ancient mythology would make for some cool adventures. Shadow of the Tomb Raider and Metal Gear Solid V are some of the few current gen games I can think of that take advantage of these unique settings, which is a travesty that there arent more with current gen tech.

And compared to something like Ghost Recon Wildlands or later Far Cry titles where its characters and setting were exaggerated in a more cartoony and action-movie way, Far Cry 2 is surprisingly restrained. The weird voice acting kind of makes it feel like they're meant to be real people rather than charicatures, and while some may find it offputting, I think it adds to the atmosphere. Add on some great music and sound effects, and you have something special on your hands, which I think best describes Far Cry 2. 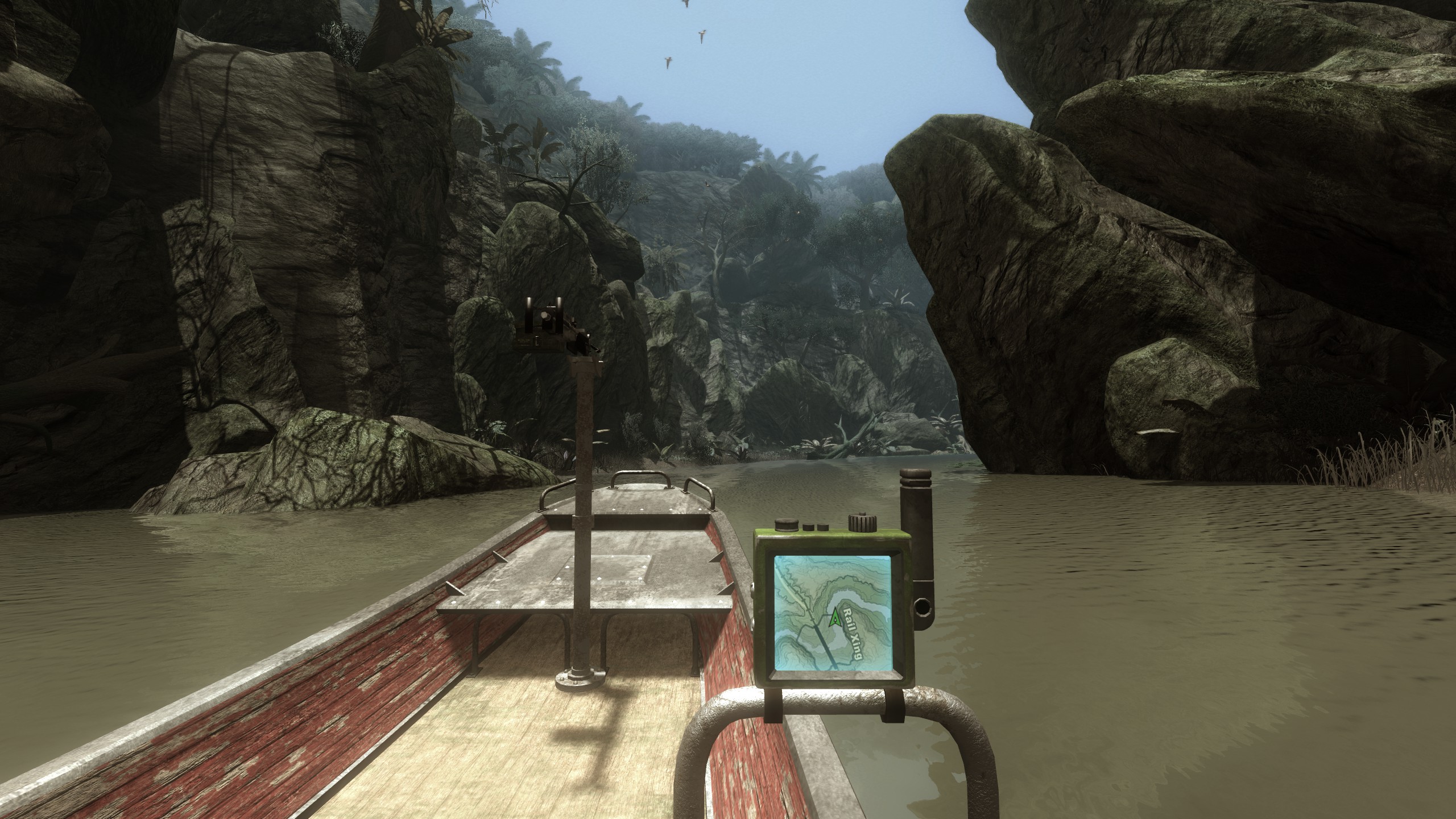 Far Cry 2 is an incredibly flawed game, I remember not really caring for it as a teenager and only now marathoning it front to back as an adult. Its place in the series is more that as a rough transitionary title between the original and the third entry, and there's certainly parts I wish could've been far better. Yet taken for what it is, it's a unique experience with few equals on consoles, especially throughout this console gen. There's still barely anything like it on a gameplay front and in terms of world building there's even less that can hold a candle to it with how more mature and grounded it is. These kinds of reasons are what likely keeps Far Cry 2 doomed to cult status, where you either like it or you don't. I admittedly don't love it as other players do, yet I enjoyed my time with it enough to where I can see myself recommending it for those that enjoy going off the beaten path. With its tiny small size on PC and its cheap price tag on sale, you could do far worse than FC2.