Secondly, I'm going to have to punish you all. There will be 2 cblogs today about today's topic. It's got that many pictures.

I was in Kyoto, and I had friends coming by plane around 4pm, so I basically had the whole day to myself, and I needed to find something to keep me occupied. I picked up a tourism map at the local travel office and perused the city map for things to do. See, I hadn't planned on living this long on my vacation. I figured that seeing Nintendo in person the day before would surely mean the end of my life, but that did not come to pass. So, with no real plans, I randomly picked a place off the map that sounded different.

From reading the descriptions in the tourism guide, Eigamura sounded like a movie theater complex, similar to what many major cities have today, where you have a theater with a dozen or so restaurants all in the one place. I figured, at worst, I'd be spending the day watching nonsensical French movies with Japanese subtitles, or going to see the latest Yu-Gi-Oh picture, which would be as equally nonsensical.

What I found was vastly different from my notions.

After taking the tiniest train I could find on a rarely used track in Kyoto Station, I trekked out to Eigamura's location. There was much walking.

I have pictures of the walk there, but Eigamura's worth waiting for.

Eigamura's a working movie studio with a big backlot that they've opened up for tourists whenever they're not shooting a samurai movie there.

Luckily, when they are shooting, the indoor portion of the facility is more than enough to quench your thirst for Japanese media. 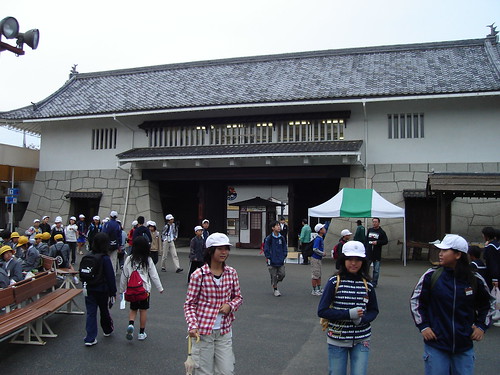 Just inside the front gate 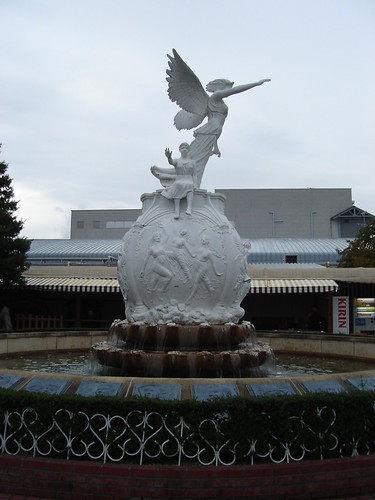 The majority of the outdoors area resembles an old Japanese village. They get pretty accurate in making it look real. All the buildings are real, no falsies, though some of the buildings seem to me to be very multipurpose inside, but I'm no expert on Japanese culture. 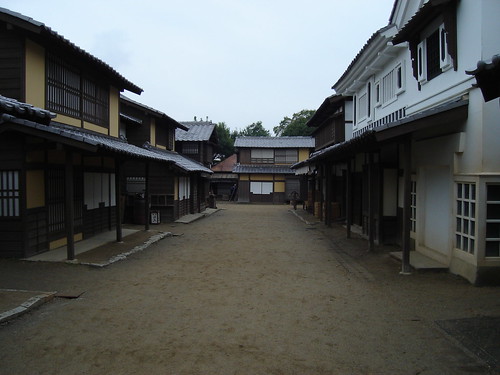 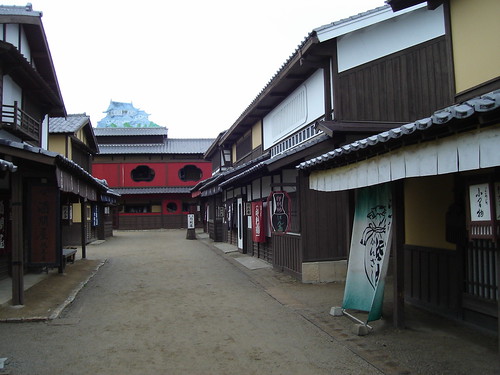 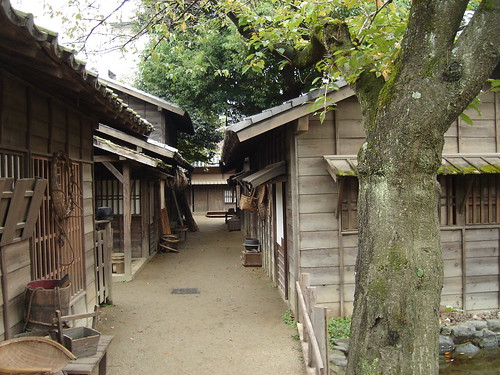 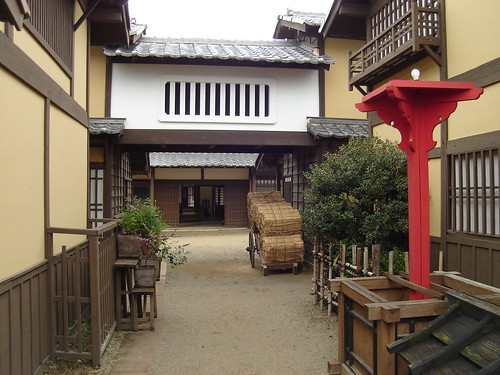 Looks pretty authentic doesn't it? This was all aided by the fact that inplace of goofy mascots wandering around, they had actors dressed as geisha and samurai wandering around the facility. 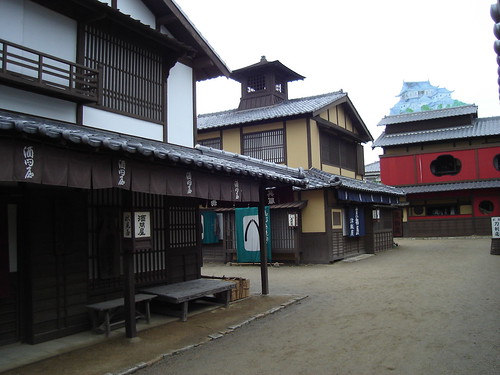 Okay, I gotta stop for a second here.

This is Toei's movie studio.

They're responsible, on their animated side, for classic animations such as One Piece, Dragonball, and Bobobobobobobo.
So they're kinda a big deal. That said, I question what they do with all their money.

They certainly don't invest it into a big snazzy special effects show.

You know the type. You've been to Universal Studios, gone to see the Waterworld stunt show or something like that.

Big explosions, the smell of gasoline as cars rip around a small arena with fake guns firing like mad.

Well, here at Eigamura, they have a slightly different take on the whole big scary action show.

It consists of a dinosaur head, with no anamatronics, rising up out of a pool, and then hearing a speaker about 50 feet from the dinosaur making a squelching sound, faintly. 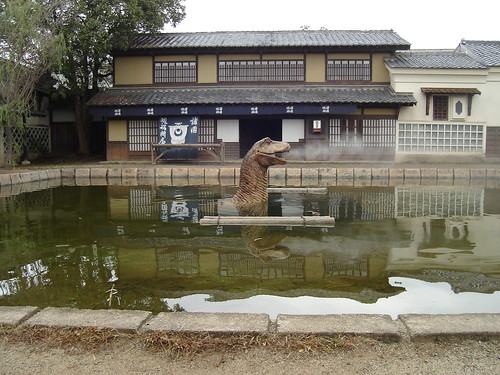 And apparently the locals are just thrilled over this as well. This was the crowd gathered poolside to see the display. 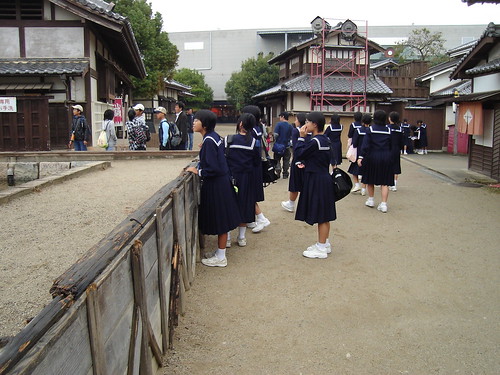 And here's a giant scary volcano/shrine thing. It has a fog machine up top and makes crackling noises like someone setting off fireworks 200 feet from you. Not scary either. 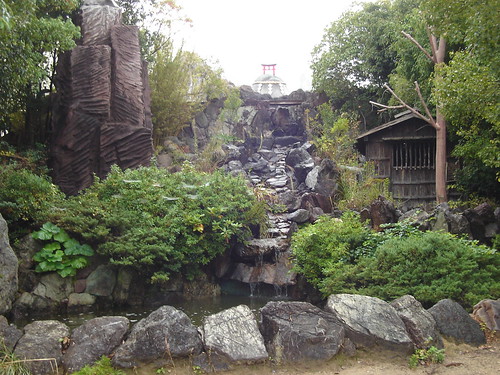 It pains me to see stuff like this sometimes, because it just serves as a reminder to me that there are somethings that Japan strives to achieve completely, and this is not one of them.

Oh, they'll nail dancing robots like no one's business. Or making kickass cartoons. Or tako balls (which are not mexican food from what I can tell). But given the option of dancing robots and wowing a public crowd with realistically scary dinosaurs, I gotta say the dinosaurs are a better long term investment. You're eventually going to get bored of that dancing robot before the macarena gets old.

Anyway, where was I?

Given that this was a Japanese gift shop, that mean there'd be two constants when shopping. 90% of the available selections are food based items, and the other 10% is shit totally unrelated to movie making.

Witness this gangsta clothing store in the samurai village area of the park. 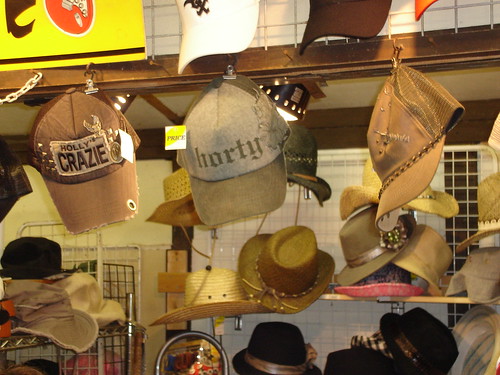 WHAT IS A HORTY?

Apparently there's also some sort of Ninja stunt show that I missed out on. That's the only thing I can think of why I saw this. Too bad there's no times listed on here or anything. Not that a Ninja would wanna advertise when he's going to be seen in public. 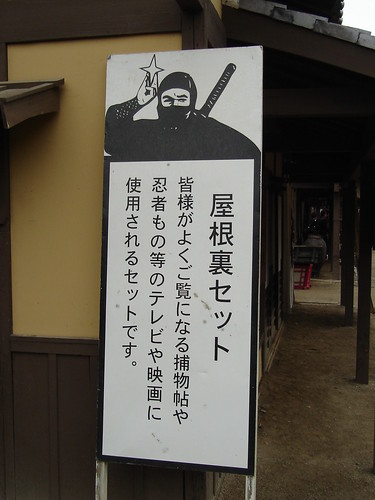 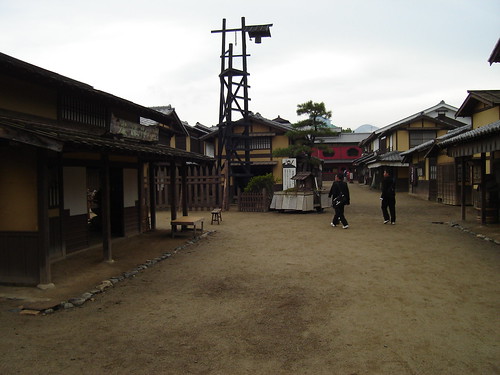 A recreation of Shinjuku from 1700, I guess. 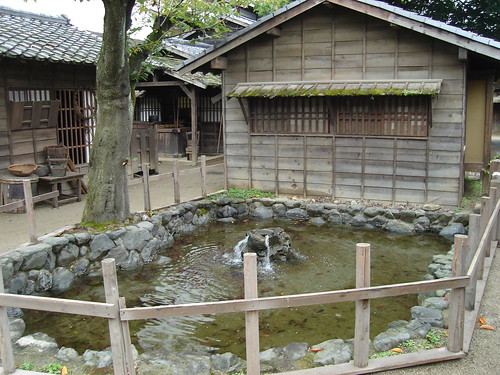 A recreation of the Pacific Ocean from 1700, I guess. 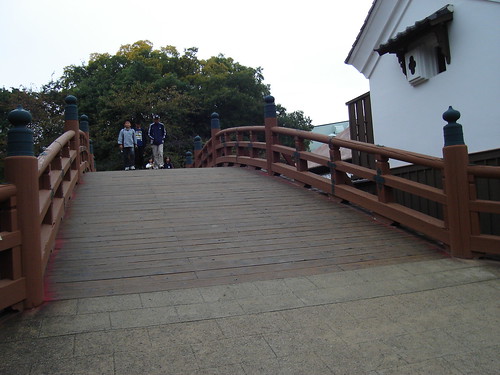 Giant ass bridge. Actually the other side was a short and abrupt ramp. They just want you to see this side in movies to make it look all regal. Sneaky... 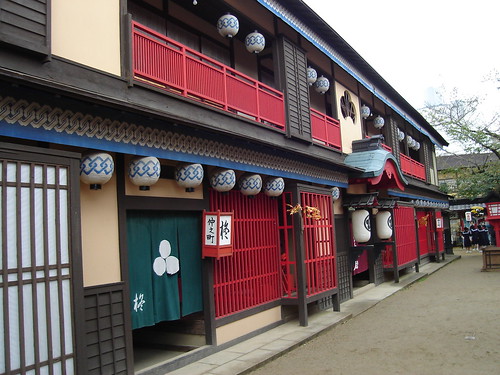 They held live stage dramas in here every 3 hours. It was dull and loud. Until they brought out the swords, then it turned exciting, and then boring again since no one dies.

The second half of this blog, which I'll post in a few hours will be about one single thing.

The Super Hero Museum.
#Community
Login to vote this up!