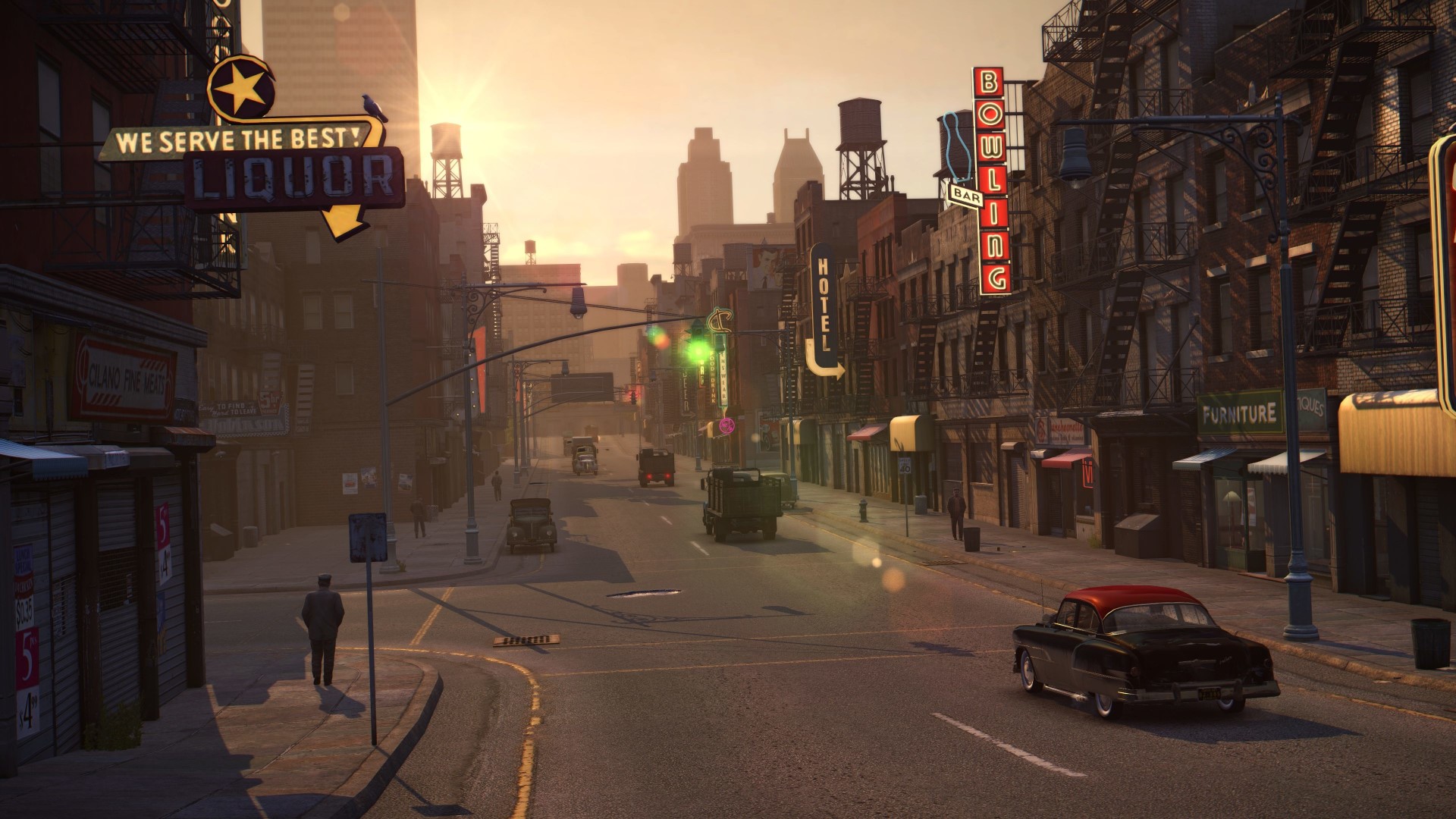 The Mafia trilogy has made its way to the 8th generation of consoles, with the first game getting the remake treatment and the second being remastered. I’ve been a fan of the series for a little while, but ever since I first played Mafia 2, I haven’t been a fan of their open worlds. I liked Mafia 3’s world a bit more because it at least had something to do in it, but I’ve always considered Mafia 2’s open world of Empire Bay as worthless. But I last played that game years ago, so I thought it would be interesting to revisit this game and see what I think of it now.

Before I booted this game up for the second time, I looked back on my old thoughts on the game, and there were only a few things I remembered. I remembered enjoying the plot and the setting, I strangely enough remembered the speed limiter and the overall more strict presence of cops, I remembered story fight sequences being in super linear spaces, but most importantly I remembered the world feeling empty. There weren’t really any activities or side missions to do in the world; just a big open nothingness. Playing the game for a second time, I found a lot of these thoughts true. Fight sequences are super linear, the story and setting is enjoyable, the cops are more strict in this game than others, and the world is mostly empty. But is being empty mean the world is worthless?

One point I remembered early on into this new playthrough is how the game never really lets go of you. I guess there are points where you can technically leave and explore, but they never felt like opportune times for wandering. I also remembered a point late into the game where it lets you loose, so I decided to play through essentially the entire game to get to this point. Throughout that time, I enjoyed the game’s rise-and-fall narrative, interesting characters, stiff-yet-somehow enjoyable driving, and great list of radio songs. During this time, I thought about the function of the open world. In this case, it served as the play space to drive around in and immerse yourself into, but one that required you to stay on a linear path. The only things you really do in this open world during the main missions are driving and driving-related activities like chasing down others or being chased by the cops. 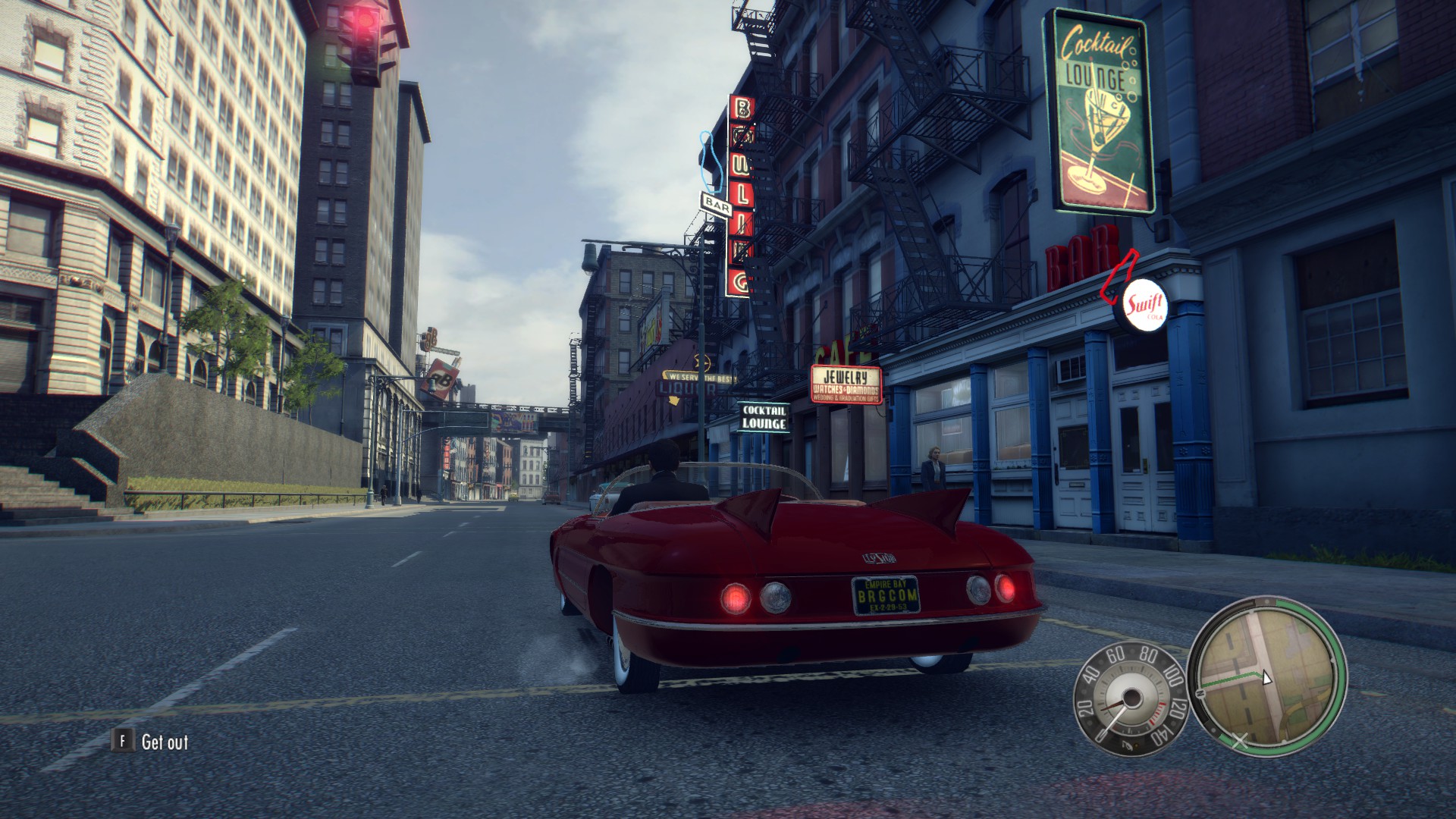 There is a whole lot of driving in this game.

When I made this realization, two questions came to mind: Does this justify an open world, and could any of this be done in a linear game? With the first question, I think the answer is tough. Personally, I didn’t find some of the driving necessary. The only time I felt the driving was necessary was with story-related events like driving with people or being chased down by the cops. The car conversations are fun to listen to, but I can’t think of any of the conversations being important to story or character development. At best, they would explain the situation at-hand or give directions, but this information is usually given in a cutscene or on the mini-map below. Despite this, I still think experiencing these conversations is worthwhile, because I believe it leads to one the main reasons of this world’s existence: immersion. Listening to two guys bust balls while a Bing Cosby song plays in the background in a car with white tires speeding down a busy city street with billboards promoting cigarettes or cola whizzing by is something this game nails. On top of that, by the end of this game, I found a sense of familiarity with Empire Bay. I started to recognize the city’s districts and landmarks, and the city felt natural to me by the end, which I think is great for getting immersed into that world.

All of this leads to the second question of whether or not this game could be done linearly. Could this game still have driving and car chasing sequences without an open world? Or would they have to be excluded? In my mind, I think this game could be linear and still have some driving segments, but they would feel different. Cop chases, for example, would have to be scripted instead of just allowing the systems at play to do the work. This would allow for more cinematic moments, but it would also feel less natural considering scripted car chases will always end the same way. With the amount of normal driving in the story, I couldn’t imagine a translation of that into a linear game, so I would imagine a cutback on the driving. That has its own benefits and drawbacks though, as for it would clear up some of the clutter and leave a more condensed experience while also losing the immersion and familiarity of being in that setting. As much as I dislike games filled with clutter (the driving in this game being no exception), I can’t imagine this game’s campaign and immersion without the open world.

I eventually made it to the end and reached the point where the game ‘set me loose.’ In the chapter titled “Stairway to Heaven,” the game tasks me with earning some money to pay off a debt. While it means you are still in a mission, it is one that doesn’t require me to go to a specific place until I earn enough money. Up to this point, I have focused on how the open world can serve the story, but now I have the ability to see how it can stand on its own. 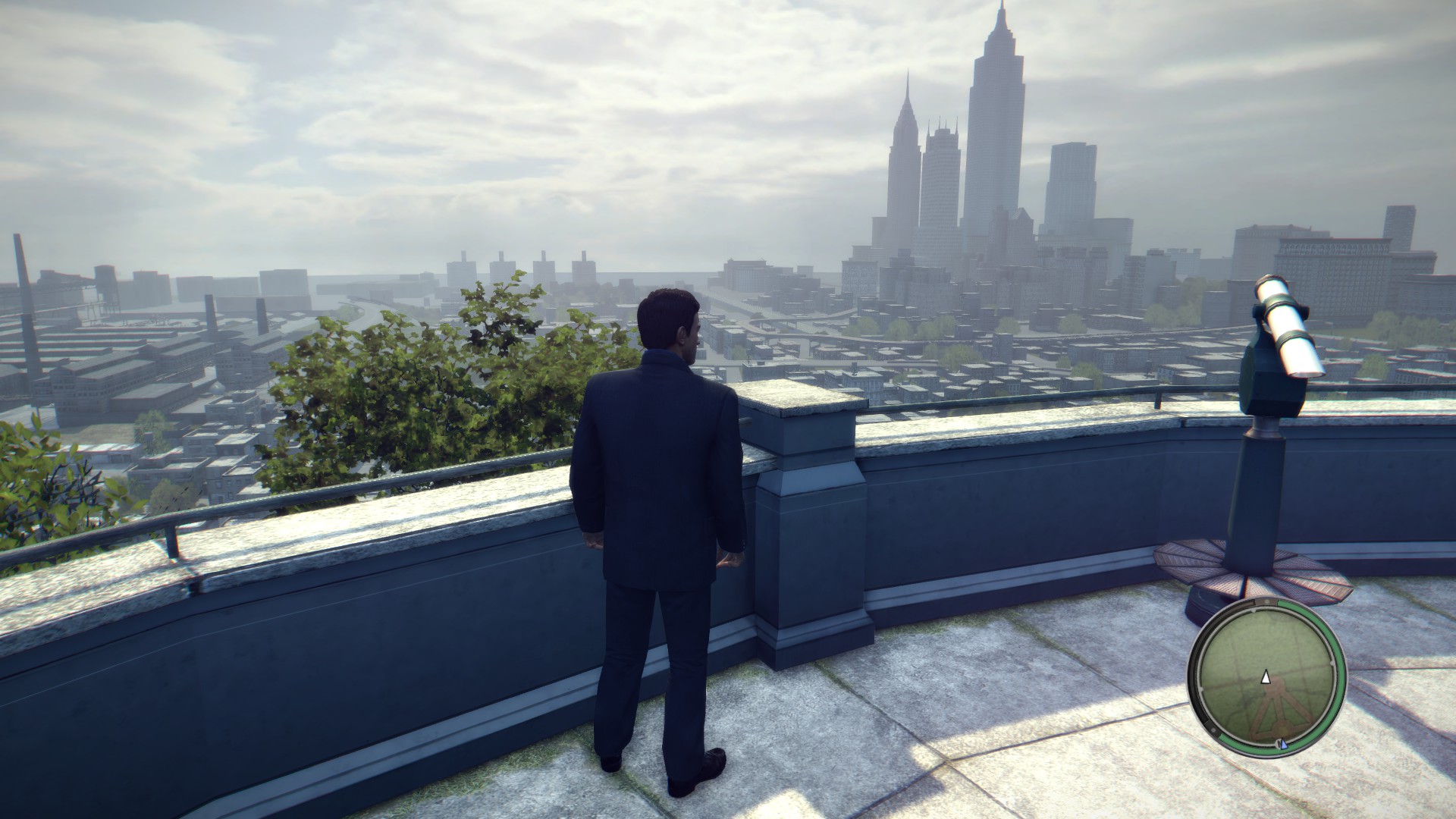 A view of the city from the observatory.

So, what is there to do in this world? I’ll start with one thing that disappears: car export. I didn’t even realize this was an activity until after I did some research on this game, but there is an activity where you steal cars and bring them to the docks for money that deactivates at chapter 14. One activity that is similar to the car export that is still available is the car crusher, where you can send cars to their death in a scrapyard for some cash. It’s one of the two ways this game advertises making money in chapter 14, but a downside to this activity is that there is no car nearby to drive, so you have to walk out of the scrapyard to pick up some new wheels. Other things you can do in this world include shops like restaurants, clothing stores, gun stores, and more where you can buy items or rob them (the other advertised way of making money), pick up one of the two collectibles (the other collectible has to be picked up in the main mission), and initiating police chases and shootouts. Long story short, this world doesn’t offer a lot of meaningful activities on its own.

Despite the lack of content, I still asked myself whether or not this open world is worth it. Is there a justifiable reason for this open world to be here when it comes to exploring it on its own? As someone who grew up on and still love checkbox open worlds like Far Cry, my initial response was no. The collectibles were the only reason for me to stay in Empire Bay and keep playing, but I didn’t find the collecting compelling and I didn’t find the city interesting enough to explore. To me, this chapter and exploring this world overall was like taking a tour at a movie set. The tour takes you on a path through the set and shows you what they want you to see, but going outside of their path ultimately shows there is nothing behind the cardboard cutout buildings. I enjoyed being on the tour that is this game’s main missions, but stepping outside of that path shows that there is nothing behind Empire Bay’s facade. So the open world isn’t worth exploring, but is it still worth it? Does an open world have value if the only way you can really enjoy it is if it isn’t open? That is a question I struggled with until I bought a burrito.

On one of the days when I was playing this game, I decided to get some takeout for dinner, and it should be fairly obvious by this point that I got a burrito. To get this burrito, I started by calling the restaurant and paying for my meal item. I then got in my car, drove to the restaurant, picked up the food, and drove back home. Halfway through this process, I realized something: this is essentially the entirety of Mafia 2. Vito gets the call to do something, he does the task at-hand, and then he goes back home (or wherever he ends up). Not only does he do that all the time, but I do that all the time. I go to work, or school, or a restaurant, or a shop, or wherever I plan on going, I do whatever I plan on doing, and then I go home. I’m not stopping halfway home and getting a task from a stranger on the sidewalk. I’m not even going around and picking up magazines off the side of the road as a collectible. It may not be the most fun way to live (or in Mafia 2’s case, experience Empire Bay), but it’s the most realistic. Empire Bay isn’t meant to be explored, it’s meant to be lived in, and I think this also speaks to this world’s immersion and familiarity as for you are treating this city as your home more than a play space to explore and complete tasks in. It may not be worth spending a whole lot of free time in, but I do think there is justification for this game’s open world. 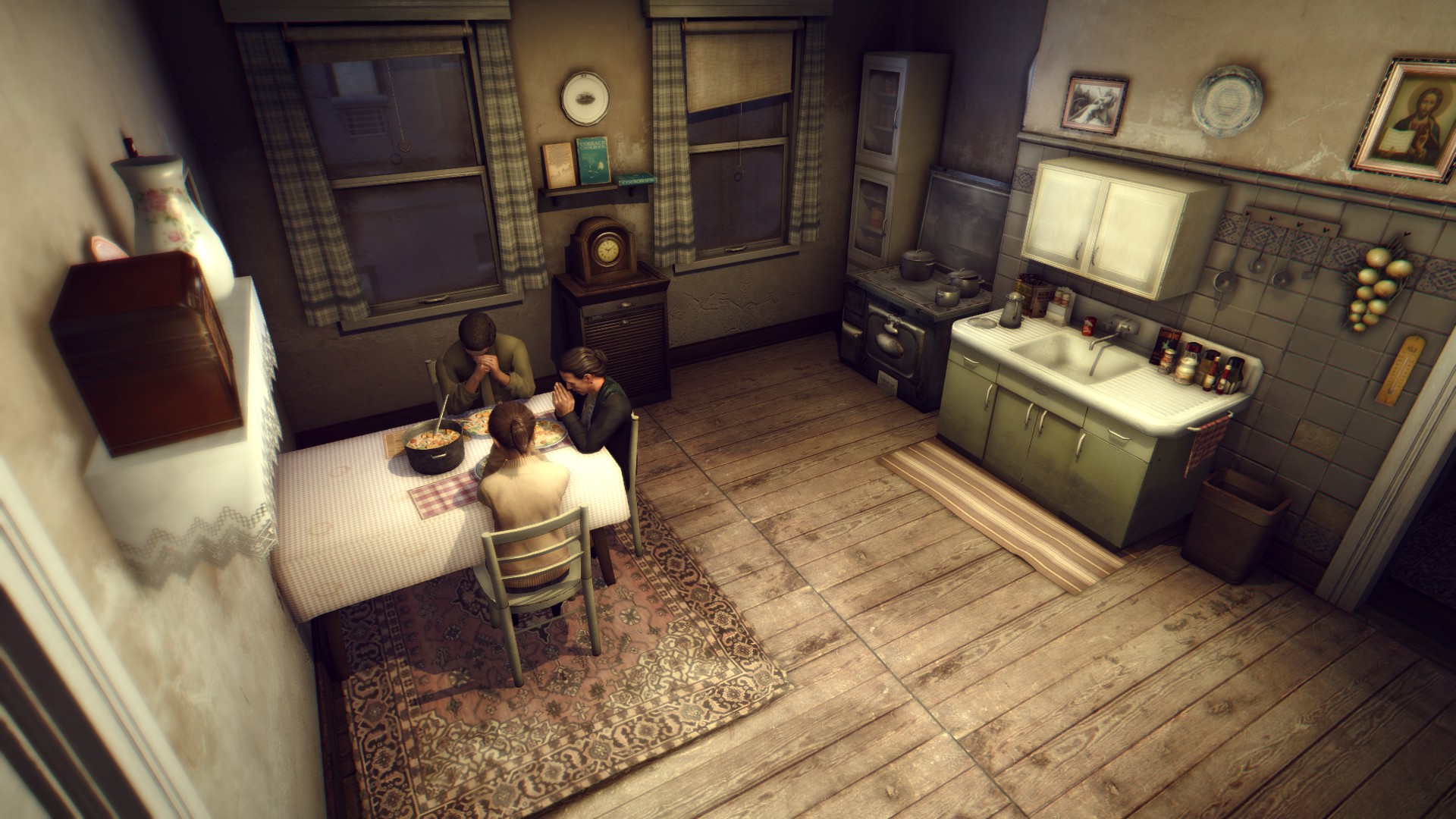 Who knew that being home for supper would make a lightbulb go off in my head?

I know there are a few things I didn’t touch on with this game like the reported cut content from the open world and that one of the pieces of DLC that allows for more free exploration of the map, but I didn’t really want to make this blog about that. I wanted to explore Empire Bay as-is and see if my thoughts on its emptiness have changed. I still like having checkbox open worlds and having things to do, but I now value and at the very least understand if a game sacrifices freedom for immersion. Which one is better ultimately depends on the game, but I think for Mafia 2’s case, I would choose immersion.