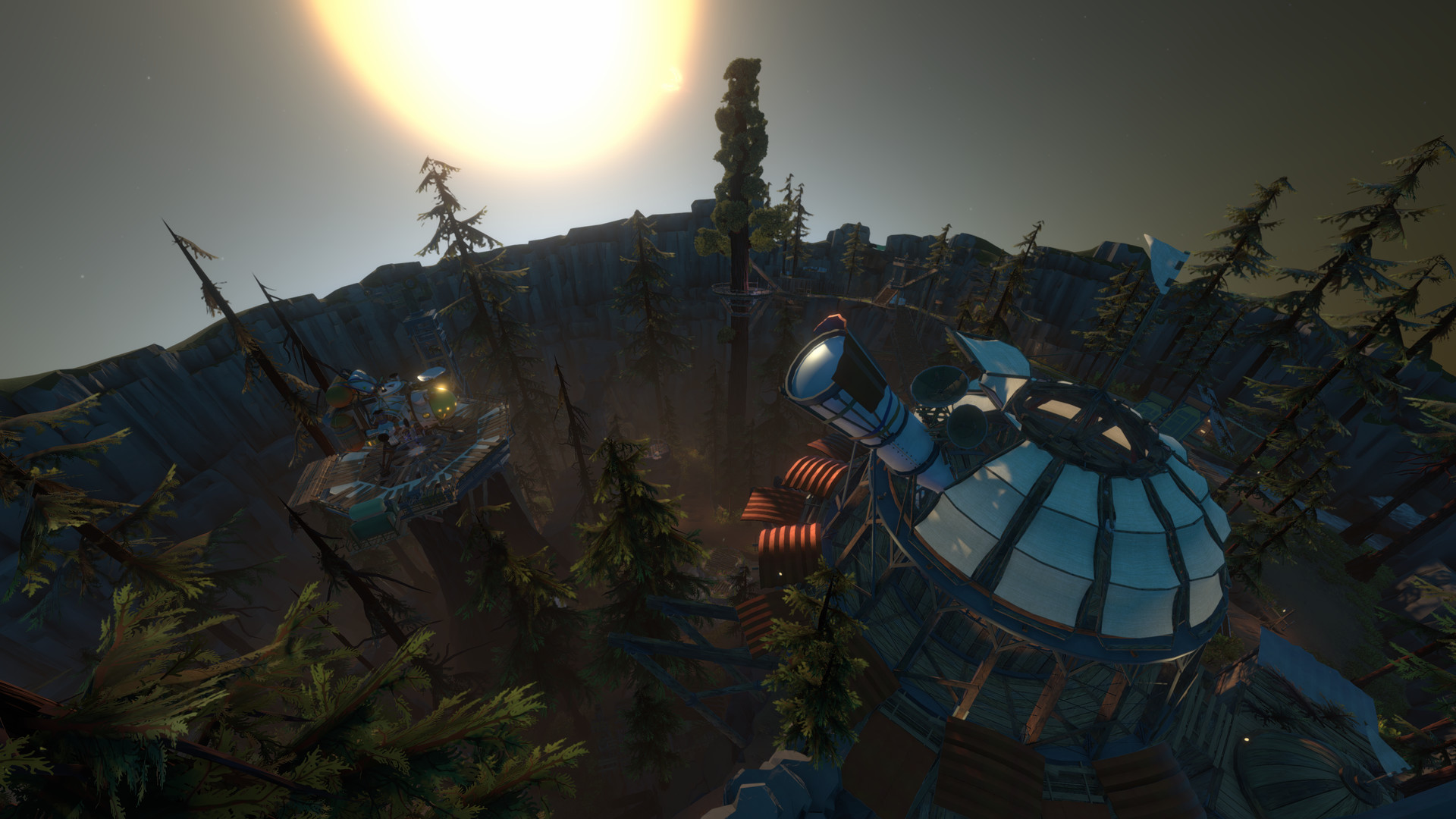 I don’t like dealing with absolutes. Whenever someone asks what my favorite game or movie is, I tell them I don’t have one, because that is the truth. The more games I play, the more I realize I haven’t played, so how could I possibly say something is my favorite if there are so many other experiences I haven’t had yet? Outer Wilds is no exception. I am not going to label this game as my favorite, but oh man does it come close. I can say without a doubt, however, that Outer Wilds is an experience unlike any I’ve ever had, and it’s one I cannot recommend enough.

The only thing I knew going into this game was that it was a fantastic game, but one I should blindly trust. The less I knew going in, the better, and that is something I agree with. As much as I would love to tell you why you need to play this game, I think even alluding to this game’s greatness puts a burden on the experience (though how else would I call attention to it?). If you haven’t played the game yet, I ask that you trust this blog title, stop here, play the game in its entirety, and then come back to read this. I know it’s a little silly to talk about my thoughts of a game to a crowd (I hope) only consists of people who have also played the game, but I have so many thoughts I really want to share. 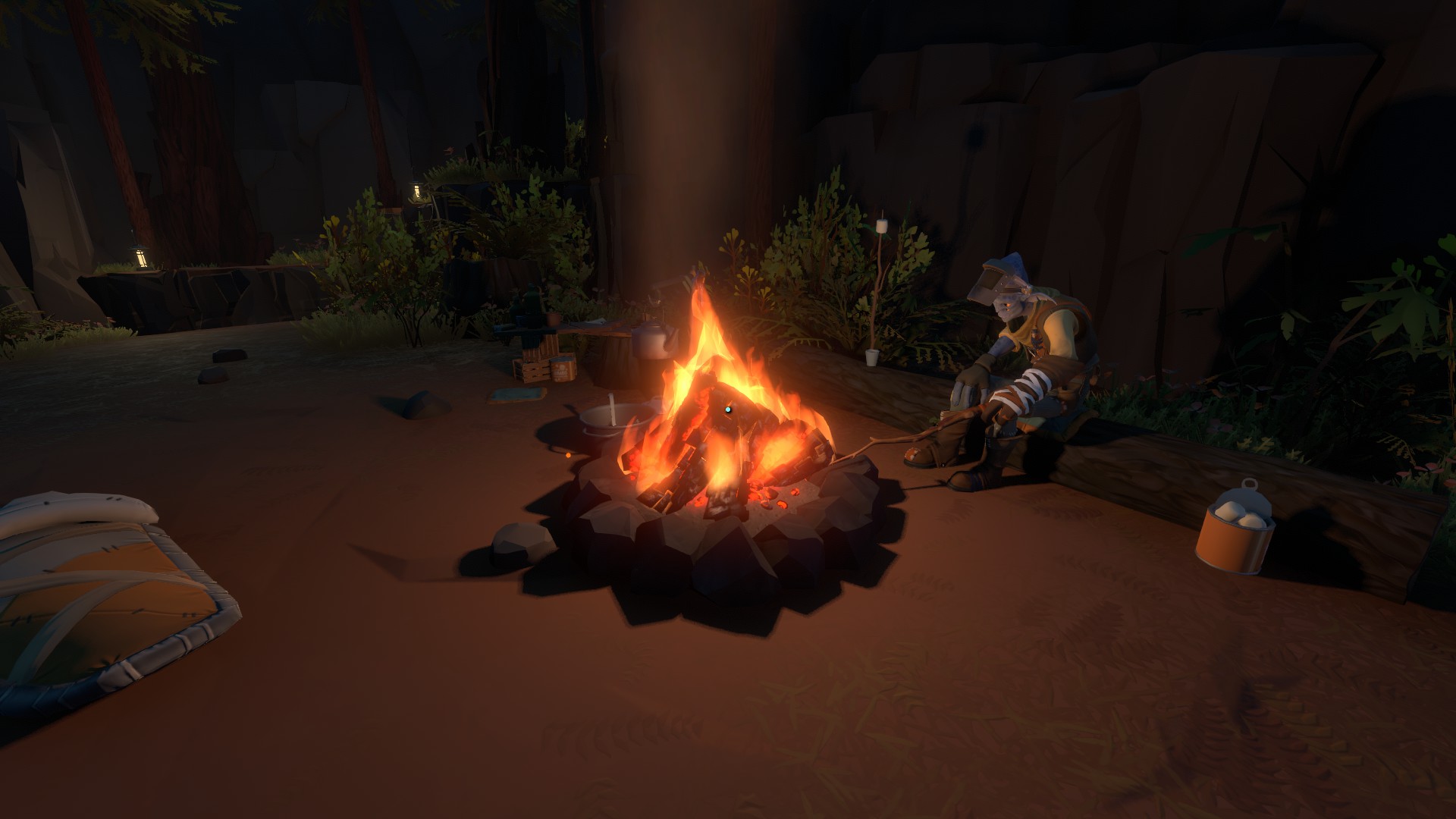 The only people who should be reading this caption are the ones who have already played the game.

Where do I even begin? I guess I’ll start with the set up. I played the game on stream every day over the course of six days, with either my friend or viewers playing a bit of backseat gaming (nothing was spoiled to me). Thinking back on it, maybe keeping all of the discoveries to myself may have been a better experience, but being able to talk to my friend about these discoveries and overall get excited with him was great.

My understanding of just how great this game is didn’t happen initially. My first few hours were solid, but I didn’t really understand the hype or the secrecy. I did have a few cool moments early on, like the first time my memories flashed before my eyes or the first time I left Timber Hearth, but I still didn’t really “get” the game. One thing I did notice, however, was how little the game held your hand. For a game that requires space travel, it doesn’t ever stop you and tell you how to play. There are areas on Timber Hearth that teach you about some of the mechanics like Ghost Matter, flying the ship, zero gravity suit capabilities, and more, but they can all be easily missed if you don’t look for them. I originally thought it was like this because a tutorial could interrupt the start of every loop, but I think there is much more significance to this that I’ll get into in a bit.

I remember sitting down in the ship for the first time, turning on my landing camera (because I thought it was something I should have on when I lift off), and blasting off into space. I remember watching Timber Hearth shrink on my landing cam, and then looking up to see the vast sea of stars. When I did this, I realized two things about this game. The first thing I realized was just how vast this game is. I just lifted off from a planet into space with no loading screens, and that plus a few other things like the signalscope give the sense of this vast, seamless world that just amazed me. The other thing I realized was how open the game, as for I didn’t have a set direction. There isn’t a little notification at the top of my screen telling me where to go, and there is nothing that stopped me from going to any of the other planets. Just like the tutorial, it’s your choice on what you want to do, and I love that. It shows a level of confidence in both the player and the world that no matter what you do, you will find out what to do next. 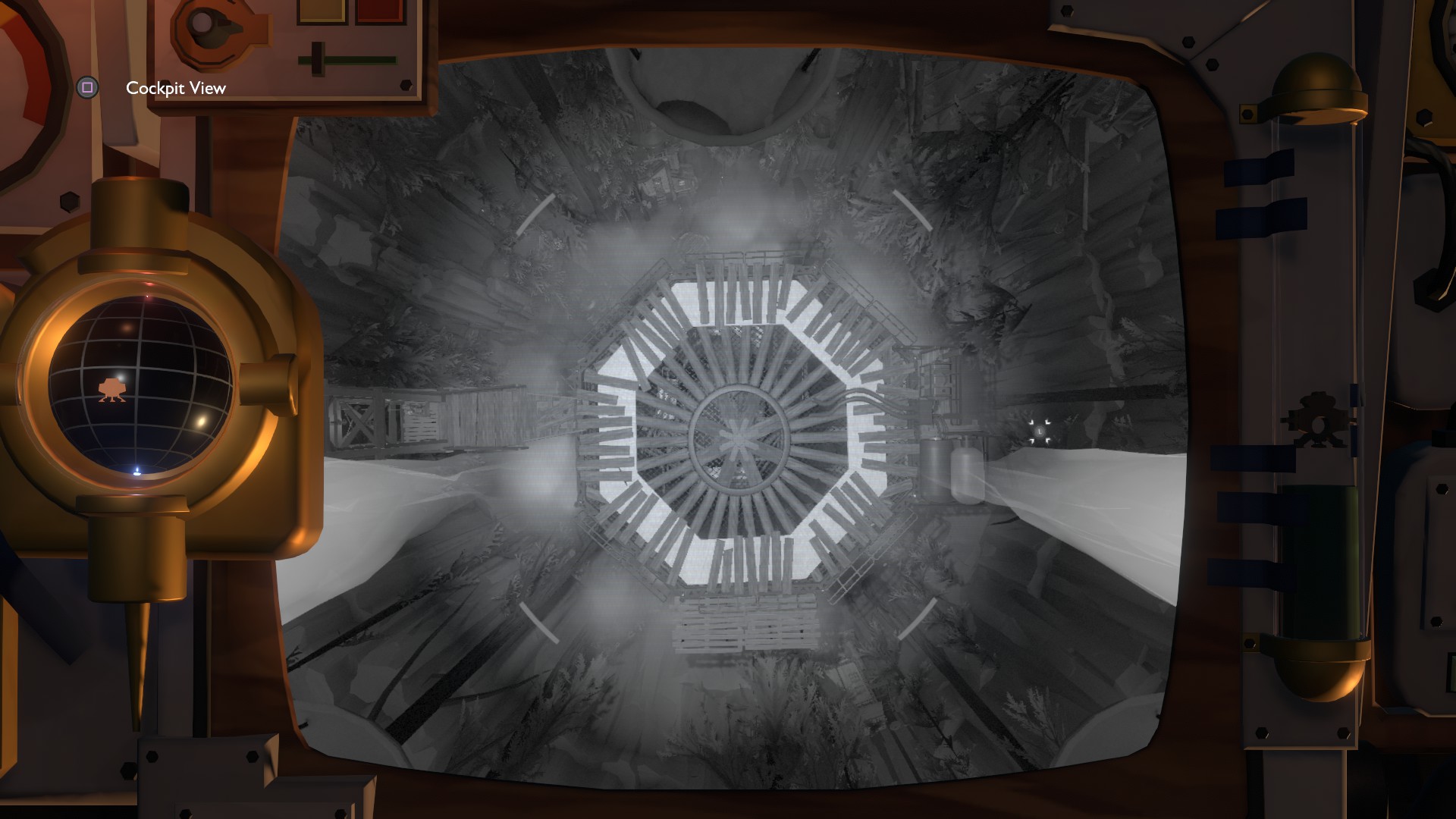 The first time I lifted off from Timber Hearth.

I decided to land on Attlerock and explore. I eventually made my way to Esker, who told me about the instruments played by others. I remembered reading a sign on Attlerock talking about a harmonica and a missing person, so I decided to pursue this lead. Long story short, I eventually ended up next to Feldspar, the missing harmonica player of interest, as well as a random note about not eating a giant jellyfish. That’s when I realized that not only is the world truly open, but the narrative is as well. There is always a lead to chase, but it’s up to you to chase it, and I love that I chase the story out of my own interest instead of being forced to follow a path. I also didn’t realize it at the time, but the hint about the jellyfish became helpful later on, and the game does a good job at teaching new mechanics and how to deal with certain situations without outright telling you what to do.

From there, I decided to stick to each color and complete the green “questline” before moving on to the next. I completed green not long after, and remember feeling excited finishing that questline. Despite my excitement ramping up as the time went one, I still didn’t “get” the game. So, I started to work on Ash Twin Project. By this point, I had already been to most of the planets and had a basic understanding of each one, and I found all of them to be incredible as each one has a function I’ve never really seen before in a game. The Hourglass Twins are two planets where one planet is sucking the sand out of the other, Giant’s Deep is a stormy planet where tornadoes lift the islands out into space for a brief period before crashing back down to the water, and more. On top of that, the music that accompanies these planets is also fantastic. Each planet has a uniqueness to them, and experiencing what that planet has to offer is really unlike anything I’ve ever done in a game.

The planets are cool, the sights are pretty, the music is stellar, the openness is great, but where is that moment when it all clicks? For me, that moment was completing the Ash Twin Project. I remember reaching the center of Ash Twin and being amazed by how much was there. I just figured out how the time loop is happening and how I remember everything, and now I have the ability to shut it off. I also noticed a third mask activated, meaning someone I don’t know is also in this time loop. I remember going to bed that night thinking about what I just discovered and what I was going to do next, and I can’t think of a time I’ve been that excited to play a game maybe ever. This is what I love about the game. Instead of telling the story to you, the game gives you the pieces and you solve it yourself. The only game I can think of that treats both its narrative structure and characters (specifically the Nomai) in this manner is Return of the Obra Dinn, but that game is nowhere near the scale of this one. Every night from thereon, I went to bed thinking about my accomplishments of the day and what I would do next. Then I would talk to my friend who came along for the ride about my excitement to keep playing as well as my findings and hypotheses. Looking back on this, I find it funny how I essentially put myself into a loop of playing this game, just like how my character was in a loop. 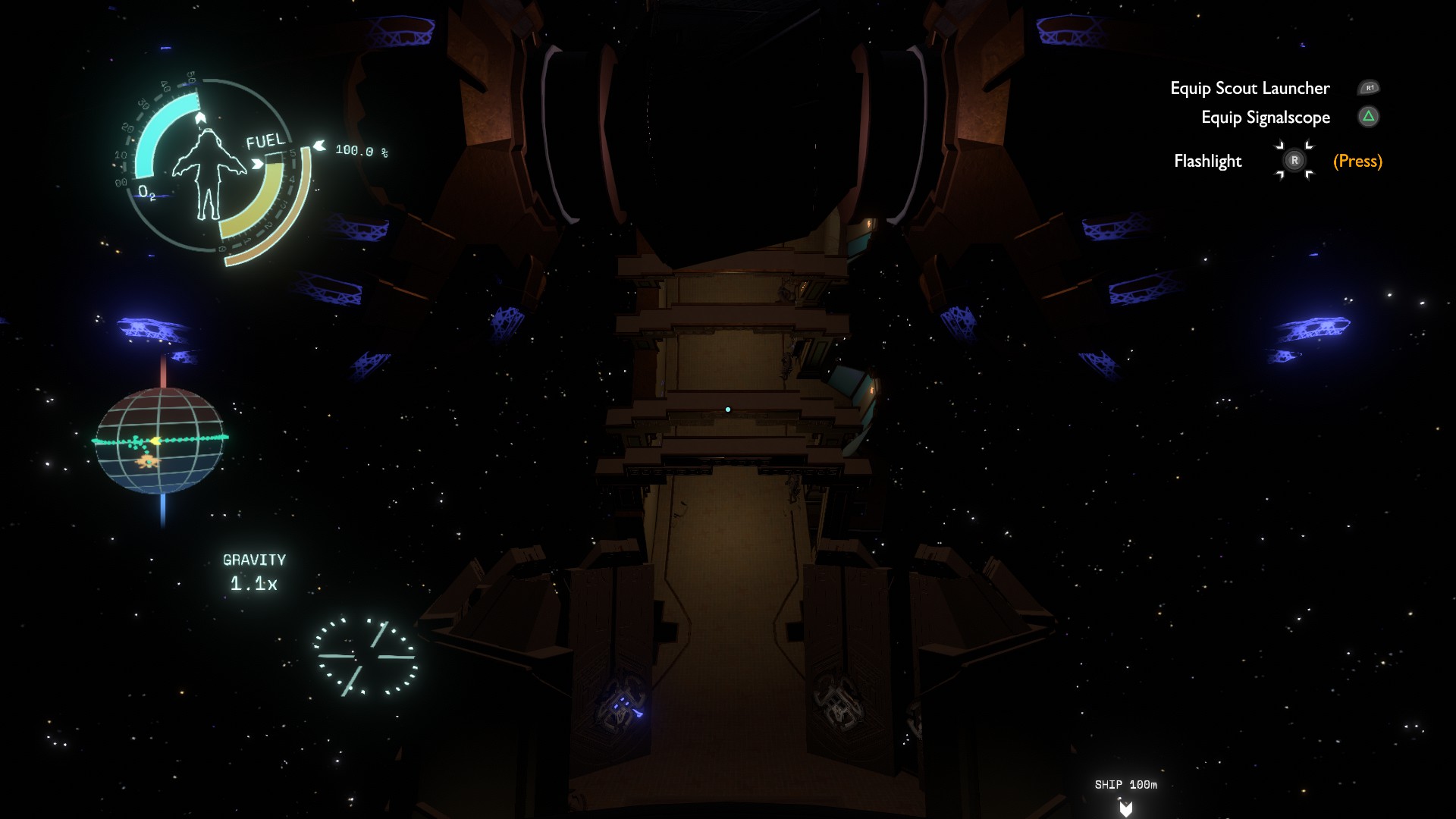 The core of Ash Twin is one of the most mesmerizing places in the game.

After Ash Twin, I completed Vessel, tried out an ending, went back to complete Quantum Moon, then completed the game again with the slightly-altered ending. Vessels was a bit forgettable, but Quantum Moon was just as memorable as Ash Twin. All of it, though, ultimately leads to the ending. It was neat to see the new big bang, but I found the part right before it to be much more interesting. You just spent all of these hours and all of that travelling just to bring a few people around a campfire, and I found that to be profound. Ultimately, it’s the people you meet who are most important in your life, and being with them is better than finding the secrets of the universe. Most importantly, though, it shows what is most important when the inevitable happens. Death is an inevitability, so it’s best to make the most of that time with the people you love.

The ending also made me realize another strong element of this game that I don’t find in many other places: the idea that the world doesn’t revolve around you. Whether it be with the tutorial, the ending, or the worlds flying around in-between, you are not center-stage. Hearthians aren’t going to flock to your feet and tell you how to play the game, you cannot save Brittle Hollow from collapsing into a black hole, and you ultimately cannot stop the supernova from happening. You are not the hero or even the main character. You are just another person in a galaxy that is going to keep spinning and repeating with or without you, and being able to accept that allowed me to accept my fate, try to make the most of my situation, and really enjoy the beauty this game has to offer.

So, what is the “thing” that shouldn’t be spoiled to newcomers? I would argue it’s the whole thing. It’s figuring out the Ash Twin Project and thinking about who that third person can be. It’s landing on an island in Giant’s Deep and being flung into space. It’s watching the supernova envelope everything around you in a brilliant blue flame. It’s seeing the dead Nomai float out in Dark Bramble chasing a signal only to find it coming from a hole too small to fit through. It’s going to bed piecing the puzzle that is the story together and thinking about what to do next. A lot of spoilers for games are usually about the story or a single mechanic, but I can’t think of a time where the whole entire experience is a spoiler. 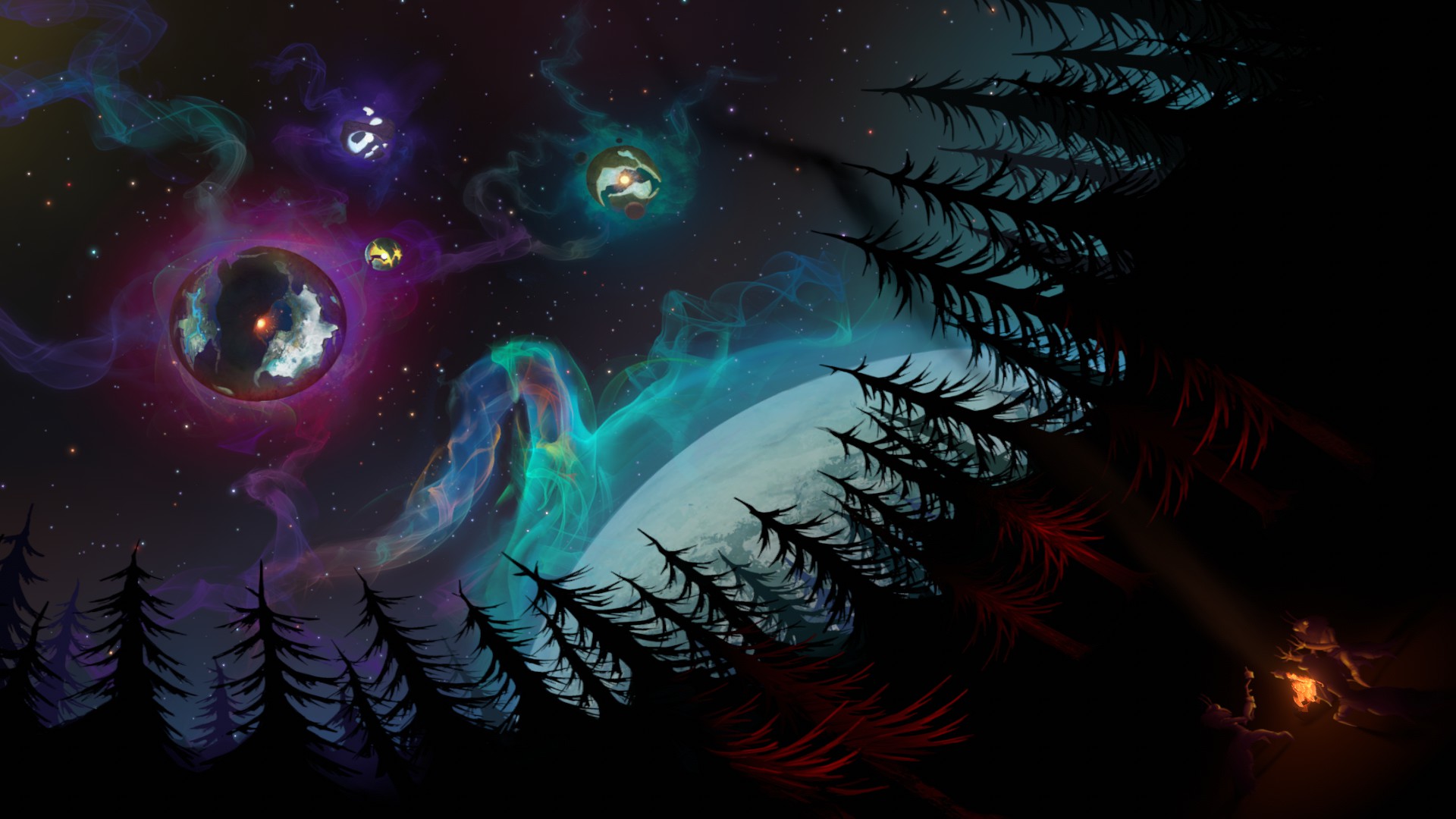 Despite this blog title, Outer Wilds isn’t a video game; it’s something better than that. In an industry that is starting to feel more and more stale, this game feels like a daring step into the unknown. I wish I could take those steps into the unknown again and again, but I don’t think it will have the same impact the second time around. Still, I can at least cherish these memories underneath the stars with a good campfire and a bag of marshmallows.