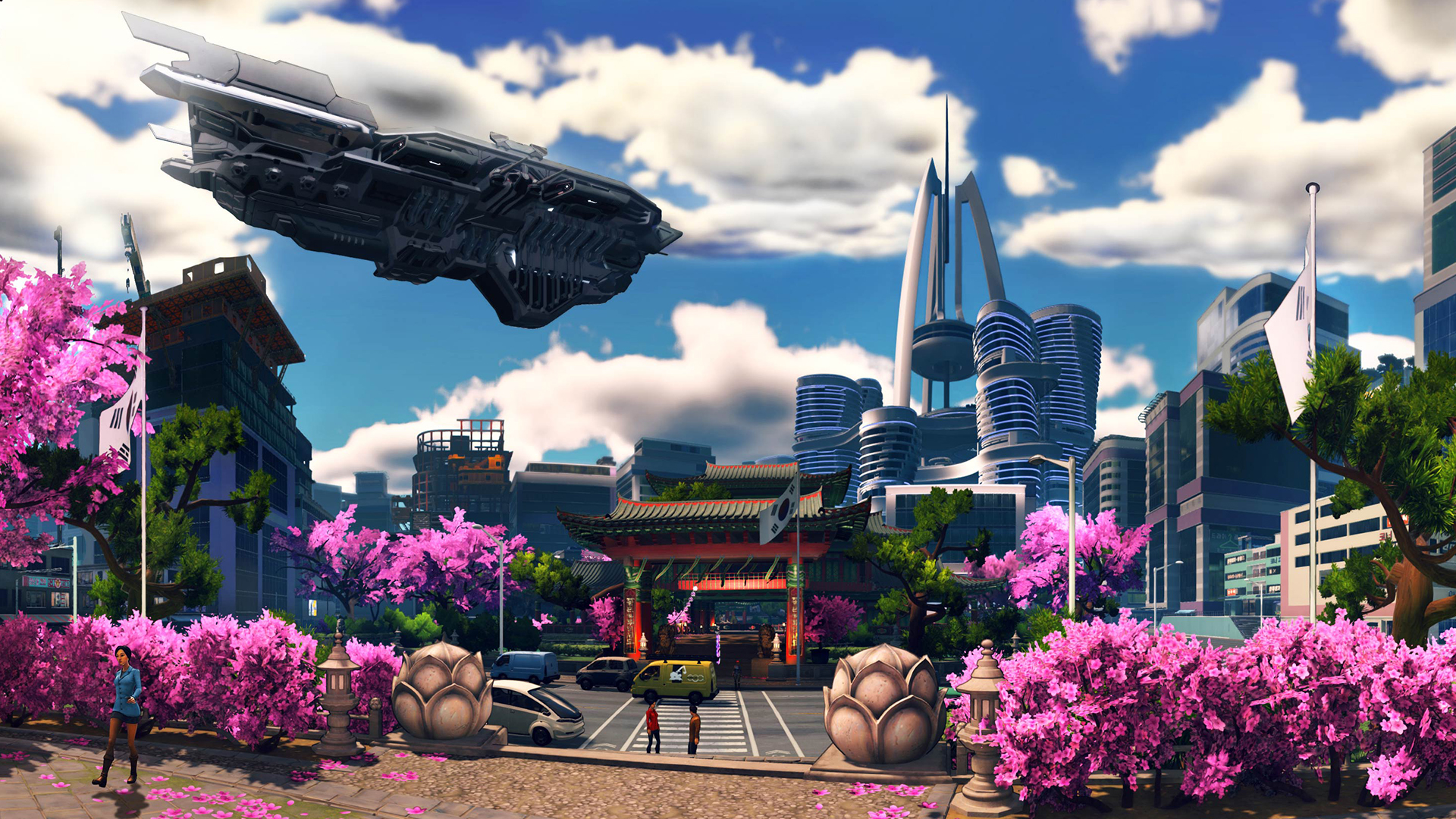 While it doesn’t share the same name, Agents of Mayhem shares the same universe and even a few similar plot points as Saints Row. The main reason this game is here, though, is as a replacement for not ranking the first Saints Row. As always, you can find the rank itself at the bottom. Let’s get into it.

Taking place after one of the endings of Saints Row: Gat out of Hell, Agents of Mayhem takes place in a futuristic Seoul, where two factions fight against each other. You play as M.A.Y.H.E.M., a group made to defeat L.E.G.I.O.N., a group hellbent on world conquest. Persephone, the founder of Mayhem, sends a variety of agents out to stop Babylon, the leader of Legion, and his henchmen from taking over Seoul.

Going into this game, I thought it would be a bit weird to rank considering its differences in gameplay and style, but this one actually turned out to be the easiest to rank of the bunch. Despite having a few good ideas, Agents of Mayhem is a mediocre and forgettable game. It’s the type of experience that I forced myself to play through because it wasn’t good or bad enough to praise or roast, and all of it will be wiped from my memory a few months after this blog because the game isn’t interesting enough to remember outside of a cool mechanic or two. It’s an open world game lost in a sea of other, better open world games, dying from a horrible fate of not being good or bad enough to be remembered in the public conscience.

Alright, so that last paragraph is a bit harsh, so I’ll start with what I think is the best part of the game: the agents. A big part of this game is playing around with hero-like characters who have their own weapon, personality, abilities, and so on. While these heroes function similarly to Overwatch characters, what I found interesting with the game is how you use them. Whenever you enter the world do missions, you choose three agents to play with, and you swap through them like weapons in your inventory. It’s an interesting way of trying to build your crew, and having three to swap through meant I wasn’t ever tiring out on a single agent. Speaking of which, the agents themselves are fun to play. All agents have a weapon, a special ability, and ultimate (called mayhem) ability, strengths against different enemy types, passive bonuses, a dash ability, a traversal ability, and a personality. Some of these elements are interchangeable, but the agents are diverse enough and worth trying out. They range from a roller derby trash talking minigunner to a Yakuza assassin, and a whole lot in between. My favorite character to use was Scheherazade, a shadowy figure who uses a melee weapon and can temporarily turn invisible. The agents are a lot of fun to use, and I like how they are equipped like weapons. 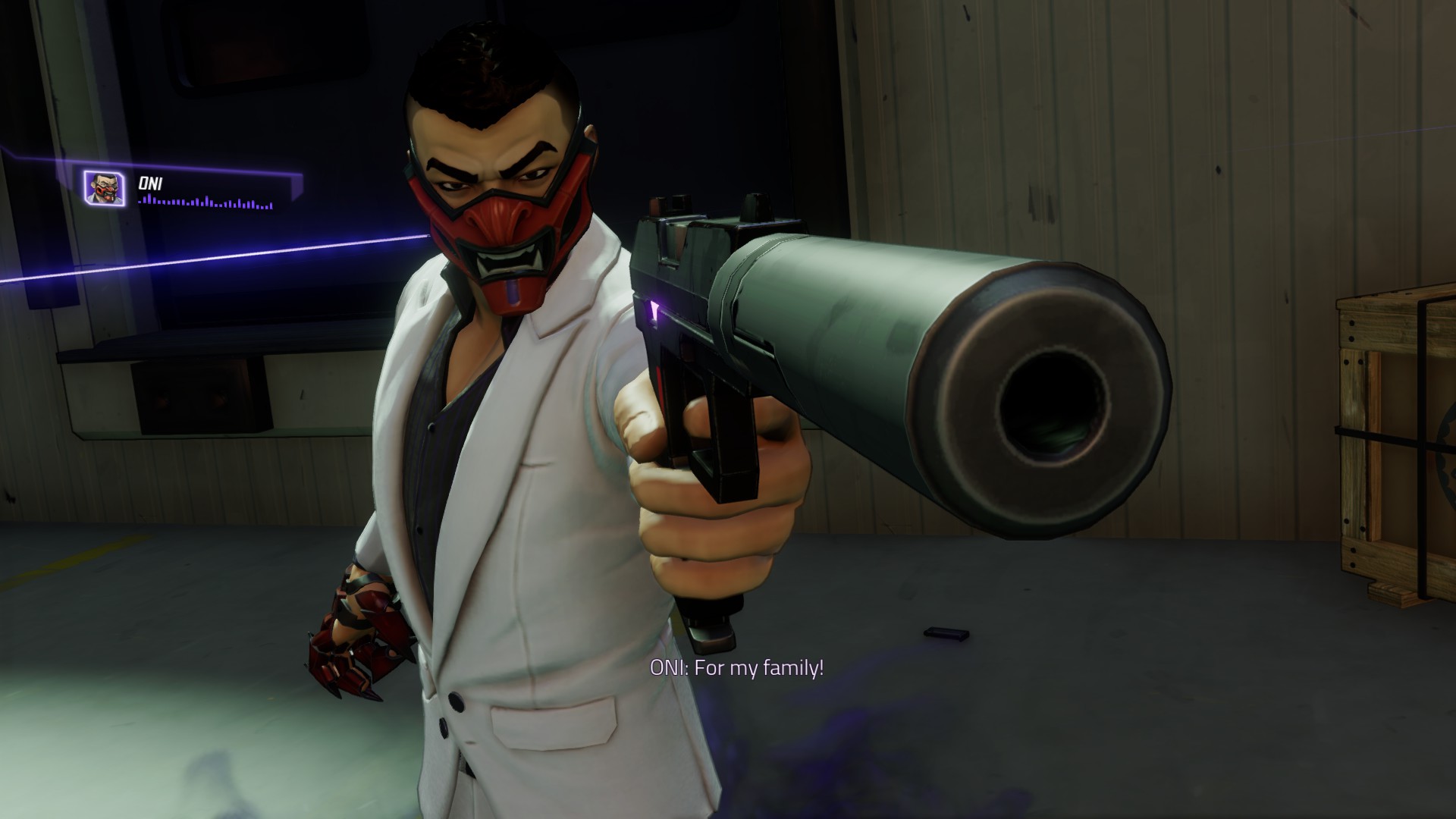 Some of the agents are inspired by other characters, but some of them feel fresh.

Before you can enter the Seoul, you first choose your agents in a hub known as the A.R.K. This hub is where you choose agents to play with, upgrade them, see your stats, and more. Despite these hero characters seeming fixed in their loadouts, there are a surprising amount of upgrades that can be done. Basic stat upgrades as they level up, gadgets to equip that change around their special attacks or give meaningful stat boosts, Legion Tech to equip to gadgets for even more change, upgrade cores for either specific upgrades to agents or to level them up after they hit level 20, and more. At some point, I stopped caring about all of the character upgrades because of how time consuming it was for me to constantly go back to the Ark and check on what I just unlocked.

Character upgrades aren’t the only thing you do in the Ark. You can also upgrade your agency with world upgrades like more earned xp, craft consumable combat items, replay cutscenes, train in a VR room, pick up an earned income from doing a specific world task, equip character and car skins, set your active vehicle that you can spawn at any time, and play a mini-game where you send agents to complete tasks in other parts of the world. The global map mini-game is of particular note to me, because while I enjoy mini-games like this, I found this one to be rather lame, and it couldn’t even be accessed outside of the Ark. The best part about the Ark, though, is when you spawn agents. You can only change your agents around in the Ark, but for a good reason: it’s where you choose your difficulty. There are 15 different difficulty levels, and you choose what difficulty level you want to play on based on the different levels of your agent. It’s an effective way making sure no agents are left behind in leveling, and it was fun to sometimes just set the difficulty to super easy and mow down enemies with ease. Overall, the Ark and the upgrades are neat, though some of it can be a bit too complicated for its own good.

Even with the difficulty settings, there is one thing this game couldn’t escape: spongy combat. The more shooters I play, the more I want games with a low time-to-kill, and this game isn’t it. Sure, I could set the difficulty down super low, but then I wouldn’t earn as much. Most of the time, I played on the game’s recommended difficulty level (which is calculated based on the levels of my three agents), and I found that experience to be pretty spongy. Despite its sponginess, I found the combat to be pretty easy. You have three agents with you, so if one agent is low on health, all you have to do is switch and let them heal. Even if one of the agents dies, all you have to do is either use a consumable or hopefully get a fleur-de-lis drop from an enemy, and they are good to go. The only time the combat got really difficult for me was with the final boss, as for he has an attack that will instantly kill agents and is impossible to dodge. The combat isn’t all bad though. Though I rarely used them, there are consumables in this game like air strikes or a giant crushing ball that are pretty fun to use. Whenever I fight an enemy with a weakness, an agent in my inventory will call out and say they are strong against that enemy type, which I think is neat. Similarly, the car that you spawn will tell you where enemy vehicles are behind you and warn you if they are about to attack. Much like the game itself, the combat is largely forgettable, but with a few neat ideas. 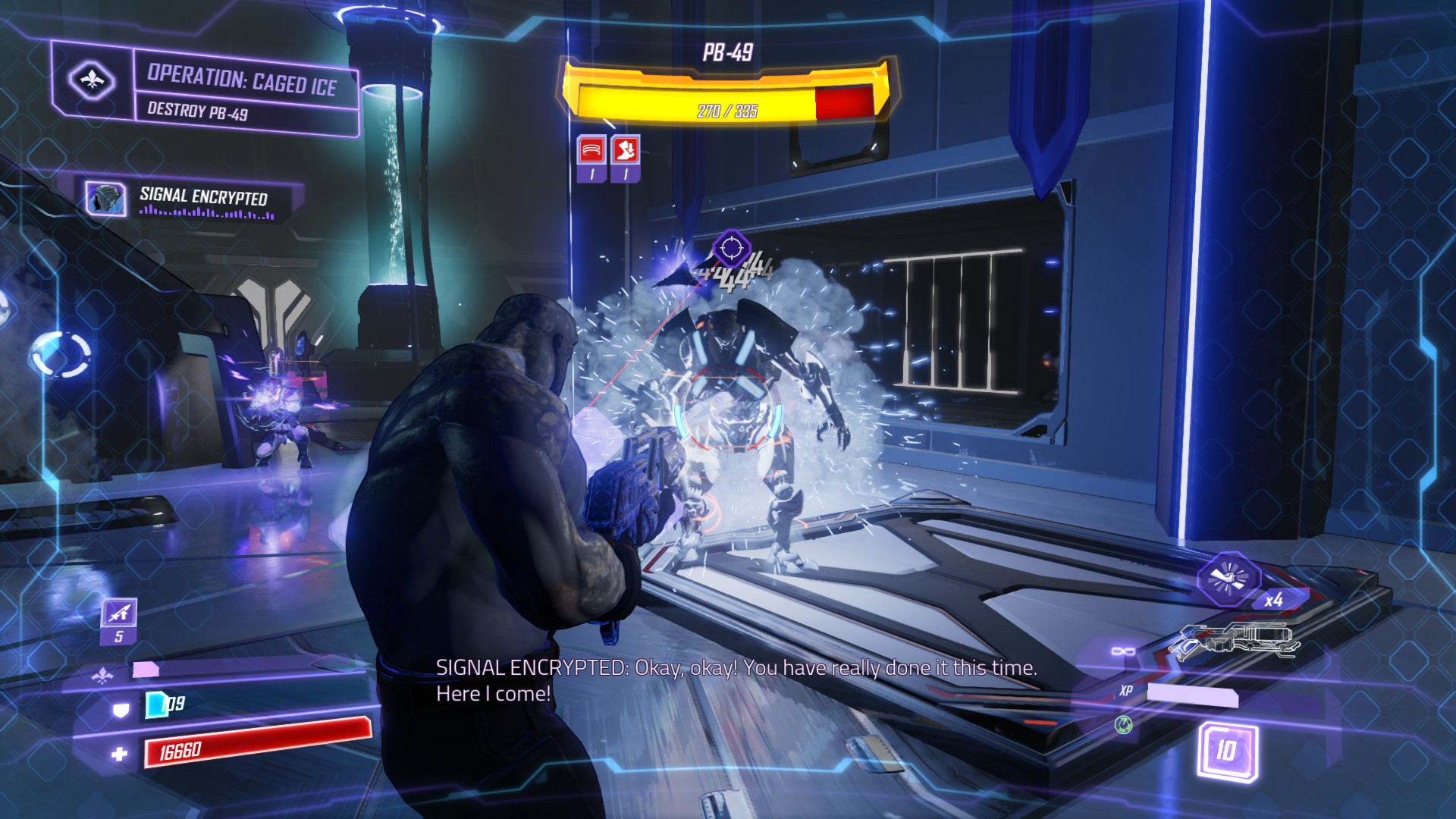 For starters, outside of the main and agent missions, nothing done in the open world is permanent. Blue missions are generated, and gold missions reset after a certain point. Maybe my brain is hardwired to only enjoy checkbox open worlds like Far Cry considering they are the worlds I grew up with, but I lost any interest in doing these activities after a certain point other than to grind materials (which I found easier to grind with picking up chests in the main missions). I thought all of this was true at first, but it didn’t take long for me to realize that one of these points was wrong. I thought the blue activities were generated, but I did two blue activity races and found out that the activities themselves aren’t generated, only the listing. The only activity in this game that is truly generated are the lairs, which are underground facilities where you go room-to-room completing tasks like kill all enemies, hack some consoles, and so on. I felt like half of the game took place in a lair, so they got annoying fast for me. This isn’t an issue unique to lairs, though. All of the missions and activities are repetitive because it kept relying on the same formula of shooting dudes, hacking terminals, and an occasional race, which is an issue the Saints Row series has done a good job at avoiding. Overall, the open world feels like a big letdown, as for it trades in all of the uniqueness of Saints Row activities in the hopes of replayability.

You would think that a cast of unique personalities would lead to at least a somewhat interesting story, but Agents of Mayhem fails to deliver. While there are some neat things to it like the cartoon cutscenes and the cheery vibe, the plot fumbles the whole thing in a laughable way. The plot is extremely basic, and I noticed multiple ways they could’ve made it interesting, but none of these ideas comes to fruition. How is Persephone and Babylon over 100 years old? Why does Legion look like a copy-and-paste of Mayhem? Why do the people of Seoul like Legion despite their evil actions? I could see the story taking some cool twists like the war between the two is actually orchestrated for the sake of achieving power or money by a secret cabal, or that you are the bad guys considering Persephone’s age and weird behavior. But no, it’s just a surface level ‘good guy defeats bad guy’ plot. Maybe the plot is just a commentary on the simplicity of old comic book stories, but I just think it’s bad writing. Speaking of which, the game tries yet again to do humor, but this time it’s a bit different. It’s still trying to do m-rated humor, but in a game that feels like a Marvel movie. The two don’t really work together, and I felt like the humor overall seemed confused on the tone it was trying to achieve. The humor and the plot overall is a missed opportunity, and I found all of it to be as basic as the game’s open world activities. 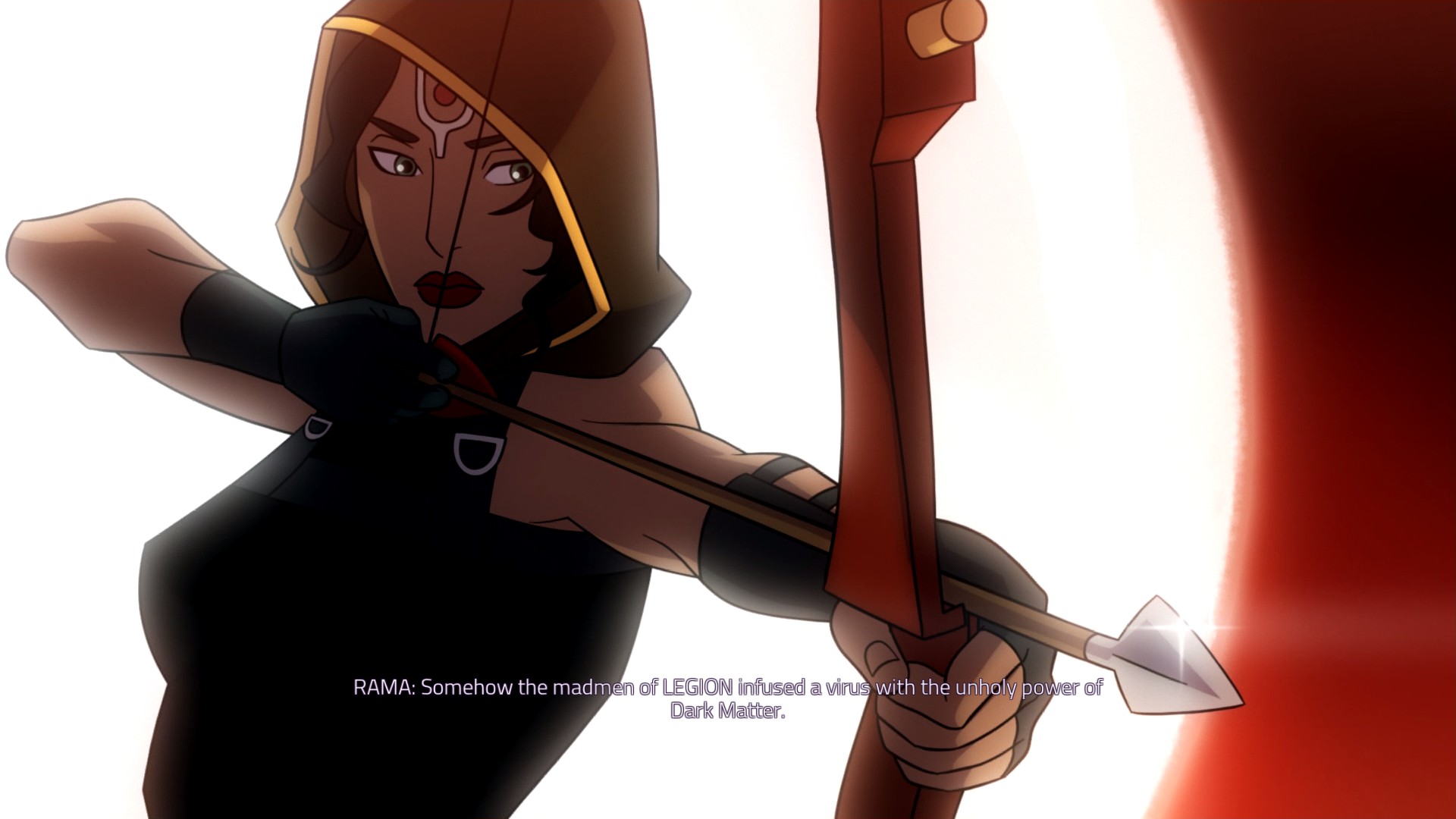 I found the agent background stories more interesting than the main plot.

In conclusion, Agents of Mayhem is a forgettable game not really worth anyone’s time. It has a fun way of handling heroes, but it handles everything else poorly. It can’t even manage to be a basic open world distraction because of how poorly they handle their open world. I’m not even the biggest fan of the Saints Row series, but even I think they are leagues better than this game. Because of that, I am putting this game at the bottom of my rank, where it will likely stay until the end of Saints Row.

2. Saints Row: Gat out of Hell