Patapon 3 is a rhythm-action RPG developed by Pyramid and published by Sony for the PSP in 2011. After venturing into a new land, the Patapons stumble upon a strange box. Ever the curious creatures, the Patapons open the box and unleash the Seven Archfiends, who petrify the Patapons. Only 4 of them manage to escape petrification by being reborn, one of which is the Uberhero, a fusion of the Patapon god Almighty and the Hero from Patapon 2. Together, the 4 Patapons go to war against against the Archfiends and their legions of Dark Heroes and Bonedeth soldiers in an attempt to undo the chaos they accidentally unleashed. 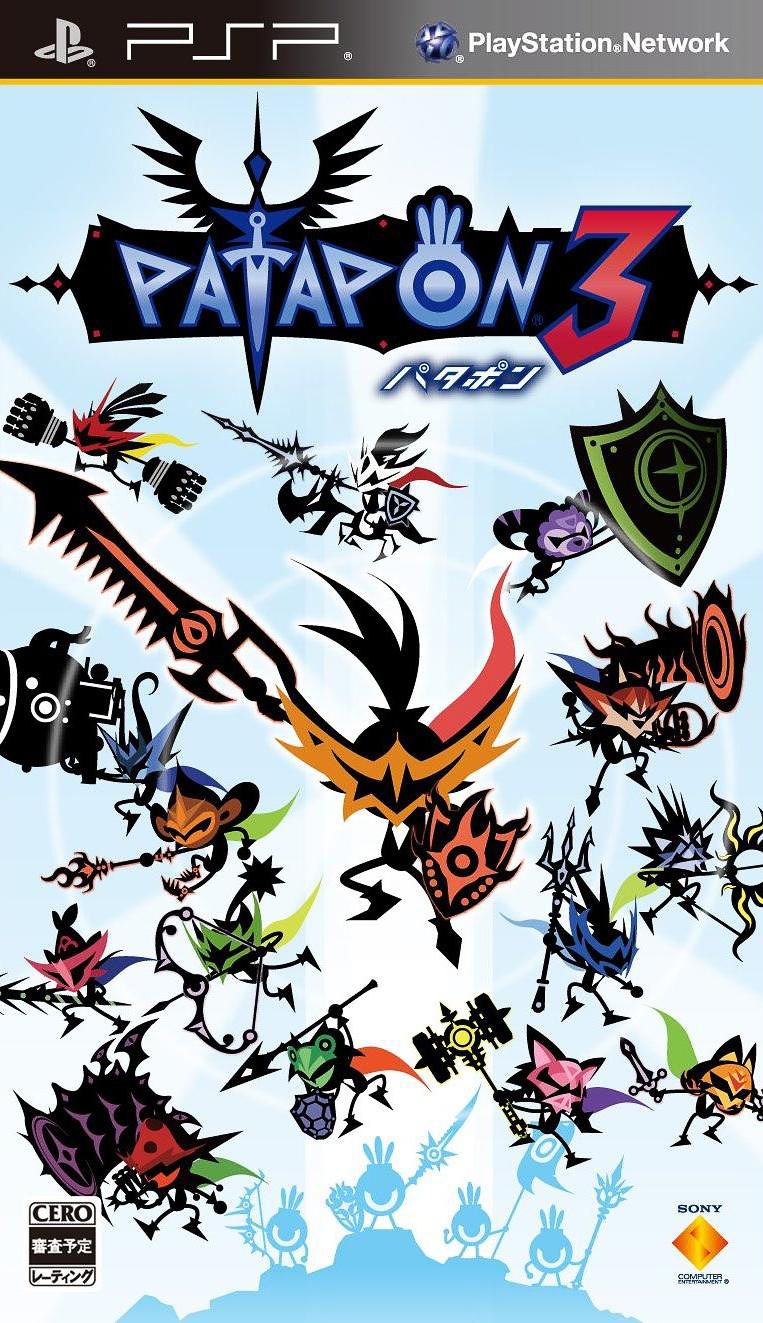 The Post-Apocalyptic Age Of Metal

The first two games were very similar to eachother, so much so that Patapon 2 feels more like an expansion pack than a sequel. As such, I'm glad to report that 3 has not only received significant upgrades to the visuals and strayed away from the structure of the first two games but has also been drenched in a theme near and dear to my heart. The theme in question? Metal!

Aside from the (once more) recycled bosses, everything has been designed to be slightly less kid-friendly and more metal. Enemies are spikier, the environments have more lightning and fire in them and even the returning music has been remixed to lean into electric guitars heavily. The opening theme and the title theme never fail to get me excited about the game.

But importantly, this theming does not extend to the story, which is somehow even sillier than the previous two games. With the Patapons causing the apocalypse, the story could have easily become brooding and self-serious. Thankfully, this isn't the case. Instead, you get the best story in the series.

As expected, it doesn't swing for the fences, but what's here is great. You play as the amnesiac and somewhat snarky Uberhero who is joined by their goofy Patapon comrades. They're ok on their own, but what really makes the story work is how they bounce off the various Dark Heroes you run into. These doofuses each represent a sin and as such are kinda bad at their jobs as commanders.

They goof off, squabble with eachother, go on tangents about nonsense and make it really rewarding to beat a mission and see a new cutscene. Beneath all of that there are some decent story beats, but they're mostly there to be funny. Overall, the story makes for a good time.

Laying Siege To The Ravaged Land

With the increased focus on RPG mechanics and the removal of a lot of secondary ways of aquiring material, the game is very much about fighting, looting and leveling. Only, instead of controlling an army, you control 4 specialized Patapons. Each of the Uberhero's compatriots represent one of the three basic Patapon archetypes (spear, bow, sword & shield), while the Uberhero can pick starting class and later switch freely between all classes. The others are limited to their respective class tree.

Combat remains quite similar with some key differences (like the ability to pause!). Since you only have 4 Patapons instead of an army, the flag-bearing Hatapon you must keep safe has been buffed to be invincible as long as there is a Patapon using a sword & shield class alive. This means that it's very important to make sure these Patapons are properly leveled and equipped, especially during dungeons.

Dungeons, beyond being long levels, inhibit the Uberhero's ability to revive automatically after dying. To get around this, you must make use of summons, which are the game's comeback mechanic. Using a summon (after keeping a beat combo rolling long enough to fill the summon meter) revives all Patapons to half health, heals those still alive to full and locks everyone into attacking until the summon completes and then launches a (kinda weak) special attack.

Knowing when and how to use these summons is vital to survival, as this game is kinda brutal. Even with the improved Hero Mode skills that now trigger immediately, the game demands near-perfection in certain levels. One mistimed command can spell the end of a run. A lot of the game's challenges feel centered around DPS checks, in spite of the other RPG mechanics at play (more on this later).

I get the feeling that the game is balanced around co-op (as many portable mission-based RPGs from Japan tend to be). In co-op, one or more of your compatriots gets replaced with a Uberhero. This gives you access to more Hero Mode skills, which severly increases your combat efficiency. Not to mention that Uberheroes are just plain stronger stat-wise.

Playing alone, you have to rely on grinding to better match the mission requirements and min-max the hell out of your Uberhero to even come close to similar results. This means that not using the high-DPS classes is more akin to a challenge run than a roleplaying choice. Compare this to co-op, where you can more easily get away with using the less direct classes as long as one person brings the high DPS.

Still, the improved visuals and the challenge that stands somewhere between Patapon 1's stone walls & 2's cakewalks usually makes for a good time. It's just that you'll probably have to prepare more than what you'd think should be necessary to survive. Let's get into that now.

There is a lot of stuff going on under the hood of a single Patapon in Patapon 3. Let's start with the class tree.

Each Patapon starts as one of the three starter classes, with more getting unlocked as you level the various classes. Most focus on damage in their own way (ranged, magic, close-quarters), but there are some tanks and support units as well. Since there are only 4 Patapons to maintain, you no longer have to severly ignore one over the other, though there are still issues with the game favouring specialization.

Leveling is incredibly harsh, as the game will not give out normal experience if you're above the mission's level. But it will also not give out extra for underleveled Patapons. As such, if you feel the need to swap class to try something new, you're gonna have to pull that unit through previous missions with the help of your overleveled party, who won't get any experience.

Having stronger gear and set skills from other classes helps alleviate how weak an underleveled Patapon is, but nothing you do can replace a properly leveled party. I think the game would be so much better if you could make classes catch up quicker. That way, your pool of potential strategies would be greater than simply depending on high damage.

The rest of the customization system works like this too, aside from the the previously mentioned set skills that get shared between classes. Each class has their own class skill, which levels up incredibly slowly through particular actions like walking, attacking or defending. Some of these get transferred between classes, but most of them don't and take about a whole playthrough of the game to level fully. Since they are often vital to making a class worthwhile, you are further incentivized to stick to one class as your main one.

Same goes for the equipment system. Loot is randomly dropped and can be upgraded, but the process is quite slow, even if you dismantle superflous equipment. Not to mention that you're only allowed to upgrade one type of weapon beyond +10 unless you visit the hideout of a clan online. This can be partially ignored if you get lucky with drops that go beyond +10, but there are dozens of equipment types and a handful of special modifiers, so the chances of you getting what you want are incredibly slim.

Again, if you had more freedom when setting up your Patapons, you'd be able to more easily swap out your strategies to focus on status effects, defense or special abilities. As is, focusing on the cure-all strategy of big damage is the way to go unless you're willing to spend a lot of extra time grinding. It's still fun, but the game could do with better pacing and a more lenient leveling system.