Running Wild with Speculation About the New Hyrule Warriors

Hyrule Warriors is the game that I have spent the most time with on my Switch, at nearly three hundred hours. I also played a good amount of time on the Wii U and 3DS versions of the game. To say that I was excited when they announced a new game this morning would be an understatement. I was comepletely useless at work today, thinking instead of all the possibilities that the game presented. I couldn't just sit there, so I started writing down my thoughts and here we are.

I'm just going to run wild with speculation here. I'll say what I think is likely, and what is just my own wants speaking. A lot of what I'm about to say will be wrong, but it's fun to speculate. Let's start with the story. Mild spoilers for Breath of the Wild ahead. Unlike the first Hyrule Warriors, this game is going to be cannon. It will take place 100 years before the events of Breath of the Wild and as such, we know a lot of what is going to happen in the game. It's going to be a tragedy. The good guys are going to lose, Link will be taken to the Shrine of Resurrection, and the champions will die. Any new characters they introduce for the story will also probably die.

How will Nintendo handle a game where there isn't a happy ending waiting for us? I'm really curious to find out how the story is told. I'm also curious to see if they will allow us to play as the villians of the story like in other Warriors games. Usually in these games you play as the villians for a few battles while they are gaining the upper hand, and then you switch back to the heroes when they fight back and ultimately win, but that isn't going to happen here. Instead, there might be a last stand type battle, where you have to keep fighting as Link as long as possible before finally being overwhelmed by guardians. Maybe there will be a mission to protect Purah (or play as her) as she takes Link's body to the shrine.

Aside from watching all the champions die horrific deaths, we'll also hopefully learn more about them. I know I shouldn't get my hopes up for Zelda stories, but they made a spin off specifically to tell this one, so I hope we get to know Mipha, Urbosa, Revali, and Daruk a lot better, so that their inevitable deaths are a lot more meaningful. I want Nintendo and Koei to emotionally devastate me here. There's a lot of potential, but again, I shouldn't expect too much here.

So what about characters? We already know from the trailer that Link, Zelda, and the four champions will be playable, but who else? Since this is a canon game, they won't be able to pull as many out of left field or fan favorite characters in, but I still think there's a lot to work with. Here are the characters that I think will be in and the characters I want to be in. Please again note that this is just specualtion and I will be wrong about a lot of this. 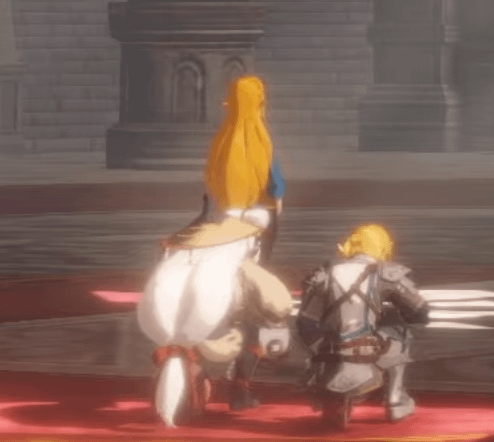 Impa: I'm 100% sure that this is Impa in the trailer. In Breath of the Wild, Impa is an old decrepit woman, but she was there and participated in the events of the calamity. She'll probably play differently from the Impa in Hyrule Warriors proper, and I'm excited to see what they do with her and what she might have looked like. Probably like Paya.

Purah: While we'll get to see a much younger Impa, we will probably also see an older Purah, Impa's older sister who accidentally de-aged herself in Breath of the Wild. I don't know if she'll be playable, as she is more of a scientist, but if they can make Agitha playable, they can make Purah playable. Even if we can't play as her, I'll pretty sure she'll be in the game's story.

King Rhoam: We know that King Rhoam is in the game from the trailers, but is he the kind of king who will join the battlefield and get his own hands dirty? At some point in the story he might not have much of a choice. This wouldn't be the first time the King of Hyrule was playable, as Wind Waker's Kinf of Red Lions was playable in the first game, but he would obviously have to play very differently to this king.

Mini Guardian: There is a little guardian looking guy on the cover of the game, and most people are specualting that it'll be playable. I mostly agree, but I could also see it being a weapon for Zelda if multiple weapons per character are a thing again. Either way I think we'll be able to control the little guy before it gets taken over by Ganon and starts killing the people it once served.

Other Original Characters: Like the first game, I'm expecting this game to create characters for the story... characters who will probably die by the end. Even if that's the case, I'm sure they'll have great designs and will be fan favorites. Right up until Nintendo kills them. 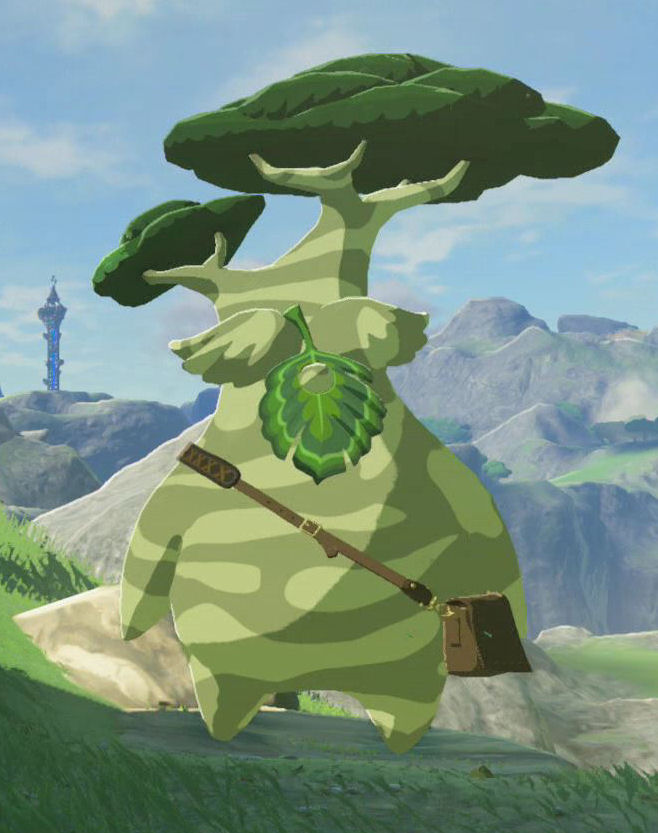 Hestu: Hestu with marakas as weapons would be hilarious. He would be the Tingle or Agitha of the game. I can imagine that in order to balance out the depressing nature of the story, they could spinkle some silly Hestu missions in. Maybe Hestu has to protect the Deku Tree from invaders or something. I would love to see Hestu in the game.

Ganon Blights: At some point in the story, Calamaty Ganon is going to overtake the Divine Beasts and kill the guardians. In doing so, the blight Ganons will manifest. I don't know if they'll be in the game, or if they are if they will look the same, but if they are in the game I hope we can play as them. I'm not sure if there are other villians that would make sense to play as, unless they're original to the game.

Sidon: Sidon will probably be in the story, but as little baby Sidon that we see in the Champion's Ballad DLC. It would be awesome to unlock him, and I'm sure that a lot of people will be disappointed if he's not playable.

Riji, Yunobo, Teba: The not as-popular-as-Sidon characters that help you get to the other Divine Beasts. I would also like for them to be playable, but I can also see them being costumes for their chamption counterparts maybe.

Kass: I just really want to beat up some bokoblins with an accordian man. Is that so much to ask?

Shrine Monk: Look, if the shrine monks can be a boss fight in the DLC for Breath of the Wild, they can be playable in a Hyrule Warriors game. 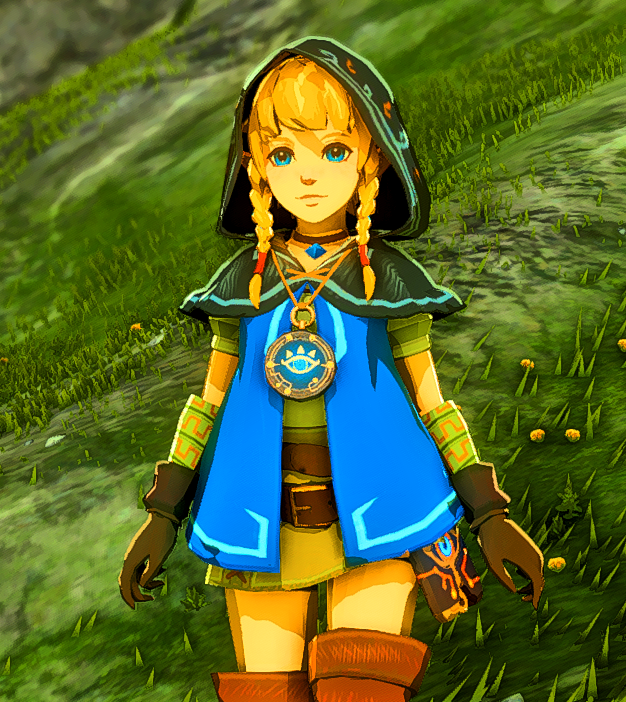 Linkle: I don't care how they make Linkle playable, but man I want Linkle to be playable. If they do make her part of the story then she might not get a happy ending, and that would suck, but if they make her playable as a non story character then she can be safe and mow down mobs of enemies. Please Nintendo, you can't introduce this character to us and then never do anything with her again.

So that's the characters out of the way, but what about weapons? In the original Hyrule Warriors some characters could have multiple weapons which would completely change their playstyle. It was like having multiple characters in one. Link had about six different weapons he could wield. At the moment we don't know if they'll do this again, but I definitely hope they do. It would be a good way to flesh out the game if there aren't as many characters. I just really hope they don't do what they did with Fire Emblem Warriors and make clone characters with shared weapons.

The first thing we need to talk about is the Lucky Ladle preoder bonus. It comes with a pot lid as a shield, so it looks like it's just a skin of Link's usual weapon instead of it's own weapon category. The first Hyrule Warriors did this as well with 8-bit weapon skins, so this is nothing new. I don't expect it to be a huge thing, so I wouldn't get to worried about missing out on it.

The Sheikah Slate looks like it will be used in game, as we see both Link and Zelda using it, but the question is if it will replace the items that you could get in the first game, or if it will be a weapon. I was leaning much more towards it replacing the items, but then we got this screenshot. 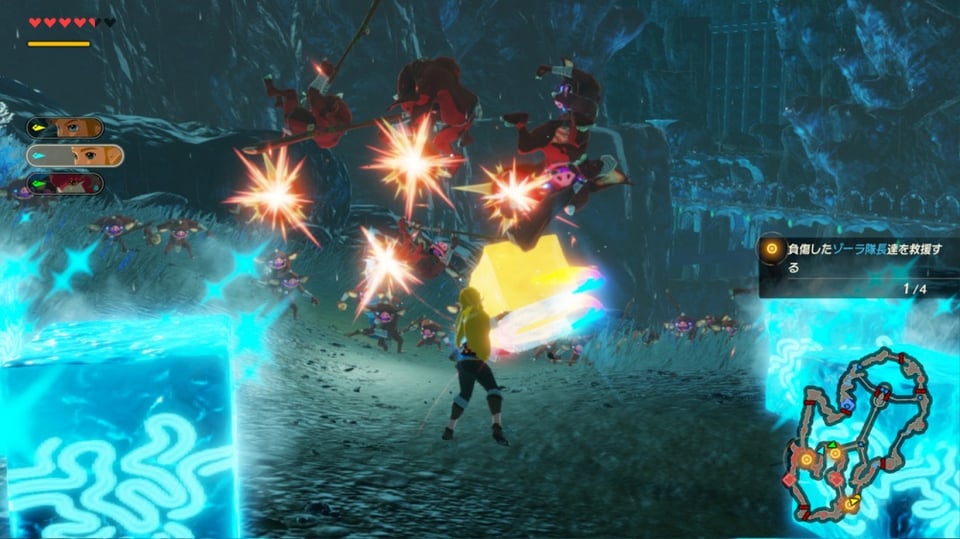 Zelda is using magnesis as her weapon here. It looks like it's a part of a combo string. We also see her using stasis in the trailer and we see Link using bombs. Stasis might be a special ability Zelda and link can do because they have sheikah slates, or it might be a Zelda specific ability. I can see Stasis being Zelda's heavy attack when not struck together in a combo, and the same might also be true for Link's bombs. At the moment we don't know enough to say.

Another weapon, or fighting style I could see working is awakened Zelda. At the climax of the calamity, Zelda finally awakens to her powers and uses this power to hold Ganon back for 100 years, but what if before that happens, we get to play as an awakened Zelda and defend Link's body before Purah can come take it away.

If we can play as Ganon in any form, then I think each of the different blights could be their own fighting style. It would go a long way to make the character interesting by giving him four, maybe five, different playing styles.

Link gets a lot of different weapons in Breath of the Wild but he wields them all the same way, but Hyrule Warriors could go crazy with it and give link a moveset for boomerangs, elemental weapons, rods, spears, axes, and greatswords. I'm not really expecting it, especially since the champions cover some of those weapon categories, but there is still a lot of potential to give Link a lot of weapons.

There is still a lot we don't know yet about this game, but thankfully we don't have to wait long. We're going to get more info on the game on the 26th of this month, and I can't wait to see what they do with the game. I hope they veer more towards the first Hyrule Warriors and not towards Fire Emblem Warriors when it comes to characters, but we'll have to see. I know it probably won't live up to everything I've written here, but I'm still so excited to see what the game will be like.