In this first open beta weekend, I finally got to test this game that had my curiosity since its reveal. The beta answered some of my questions about Crystal Dynamics' Avengers, so I decided to come here and share some of my insights with the community! 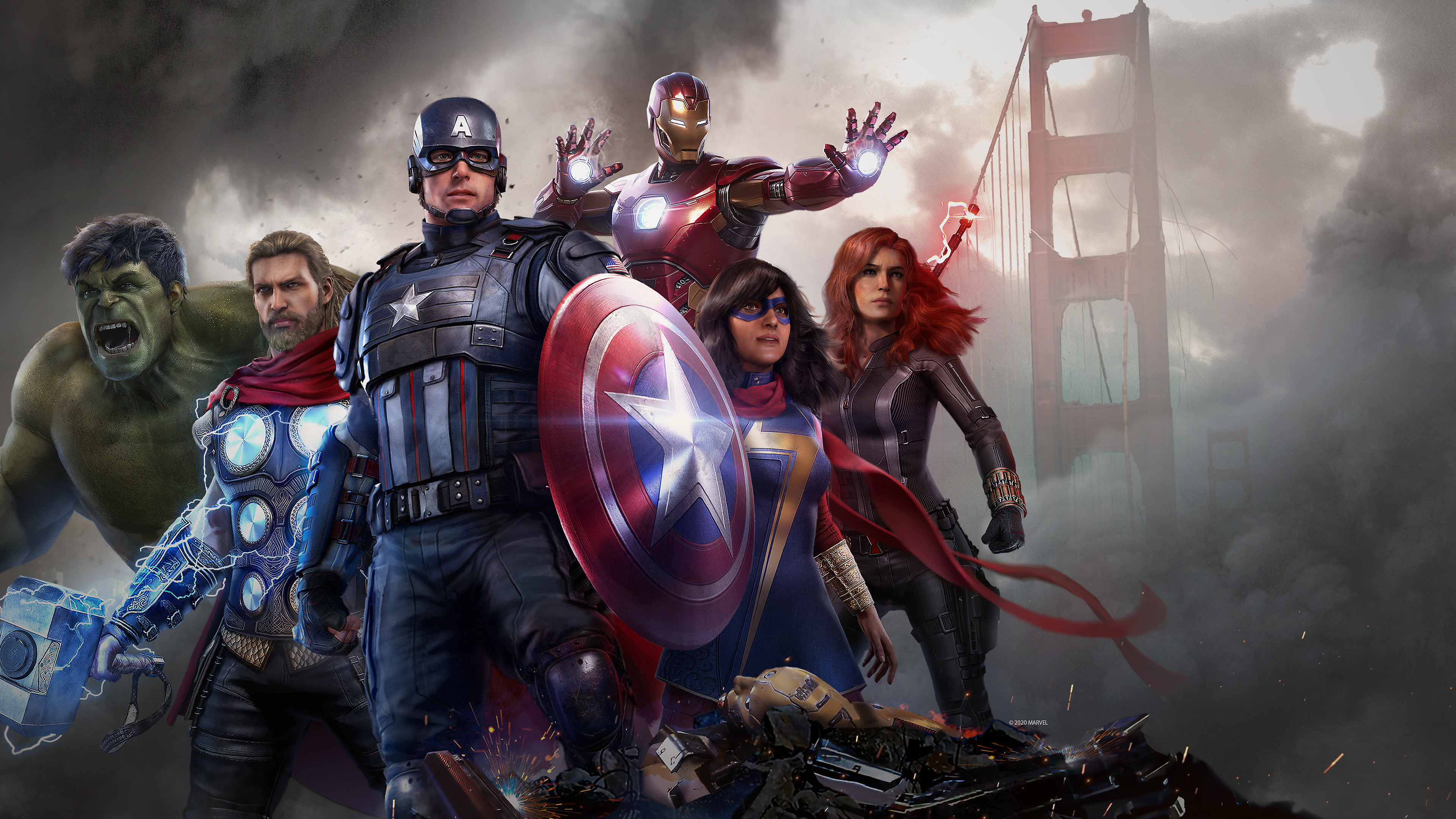 When the first pieces of information about Marvel's Avengers came out, it caught my interest because the game looked quite similar to Marvel Ultimate Alliance, another "ensemble game" from the PS2 era that I loved! As I got my hands on the beta, I was pleased to see that, indeed, those two games share a lot of similarities. Avengers seems a more complex version of MUA with its many RPG elements that offer players different gears with different stats and attributes, plenty of cosmetic possibilities and gameplay extended with more superpowers and abilities to give us a sense of truly being the hero we choose.

Of course, more complex doesn't directly mean better, and judging from this version of the beta, Crystal Dynamics has some work ahead.

I must start by saying that every Hero has a personality of their own. Playing as The Hulk feels quite different from playing as Iron Man or Black Widow. Seeing as Crystal plans on adding more Heroes over time (for free!), these distinguishable identities make me more excited to see the future names that will compose the growing cast.

I confess, however, that the differences between characters have one issue. As someone who played a lot as Black Widow, I came across an obstacle: in every area of the game, you can find breakable doors with chests or hostages inside. Every character can break them - even Iron Man, despite needing to waste his Hulkbuster - except puny Natasha. One might argue that Crystal design this in order to encourage players to replay missions with different characters or to play multiplayer. But it feels dull and forced, especially considering it's "only" chests or people to rescue and not new areas that, for example, hide exclusive rewards for a character or "type" of character. 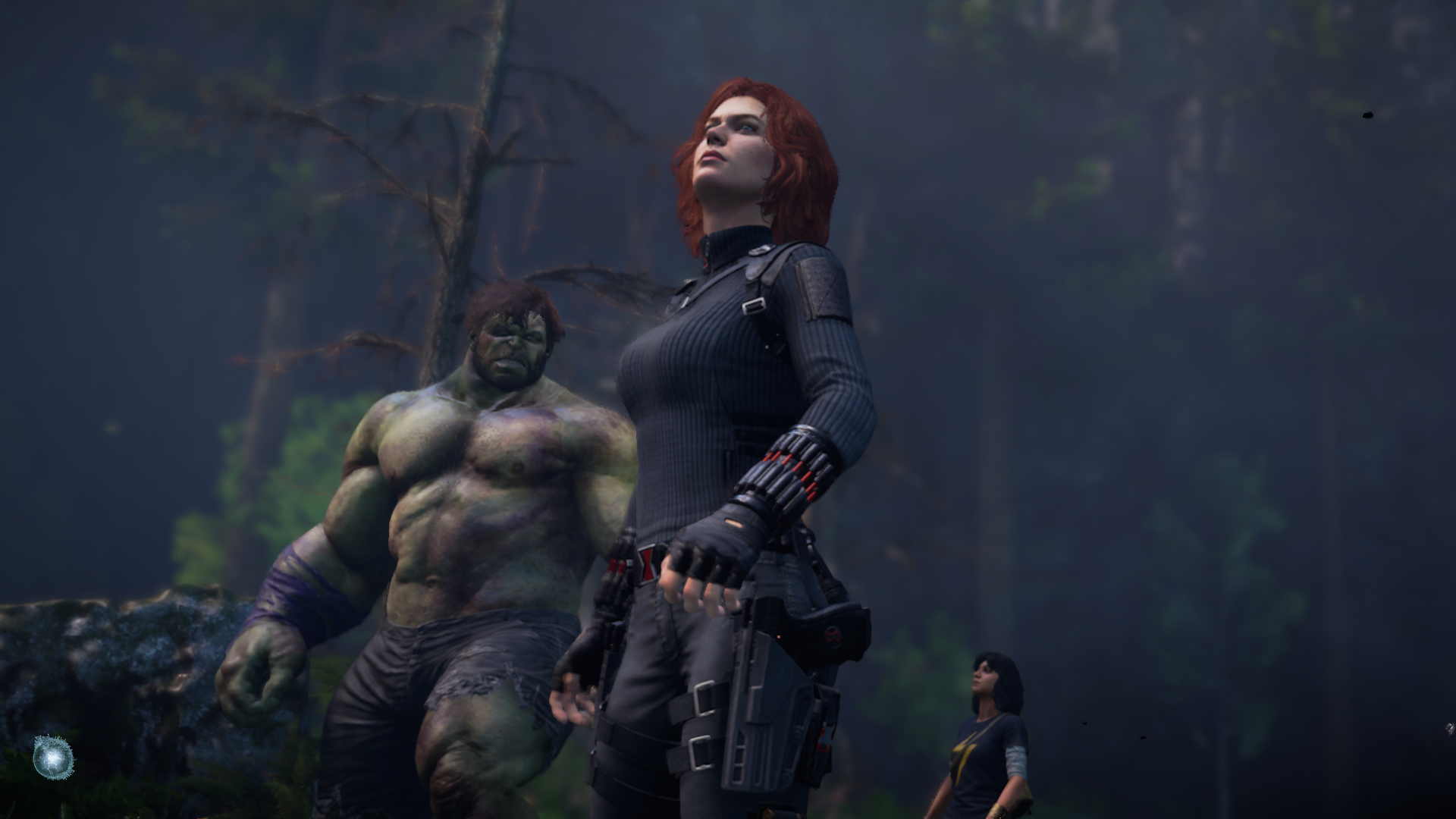 One excellent way to fix this would be to implement a Ping System. With very simple commands, you can ask your teammates (whether they're A.I. or not) to break things for you, to attack/defend certain enemies or areas, and so on. For a game that centres so much on cooperation, Crystal really need more mechanics to actually inspire cooperation! Also, I don't know if it was just me, but I was expecting the game would allow me to switch between my team members when playing offline.

The Artificial Intelligence helps during massive combat encounters, but it's dumb as a stone. It's not uncommon to see your pals walking in circles, getting stuck in an invisible wall, stumbling on your character or even stop following you, as happened with Iron Man during one of my missions.

I cannot say how much better or worse (hopefully better!) is playing with real people, since no matter how many times I tried, I could not join multiplayer sessions. The game would always find one other player and, even when the countdown for the start of the mission was over, the mission would not start. From what I read, Square's servers have been suffering from the number of people that are playing the Beta, so this might explain. Doesn't excuse though...

In terms of customisation, the Beta did little to show all the "greatness" that Crystal Dynamics hinted at. The Gear does not affect the Heroes' appearance, only their stats and perks. Alternative outfits are there but, seeing the short time we have to complete character-specific challenges and unlock their stuff, it's hard to actually experiment with the variations. 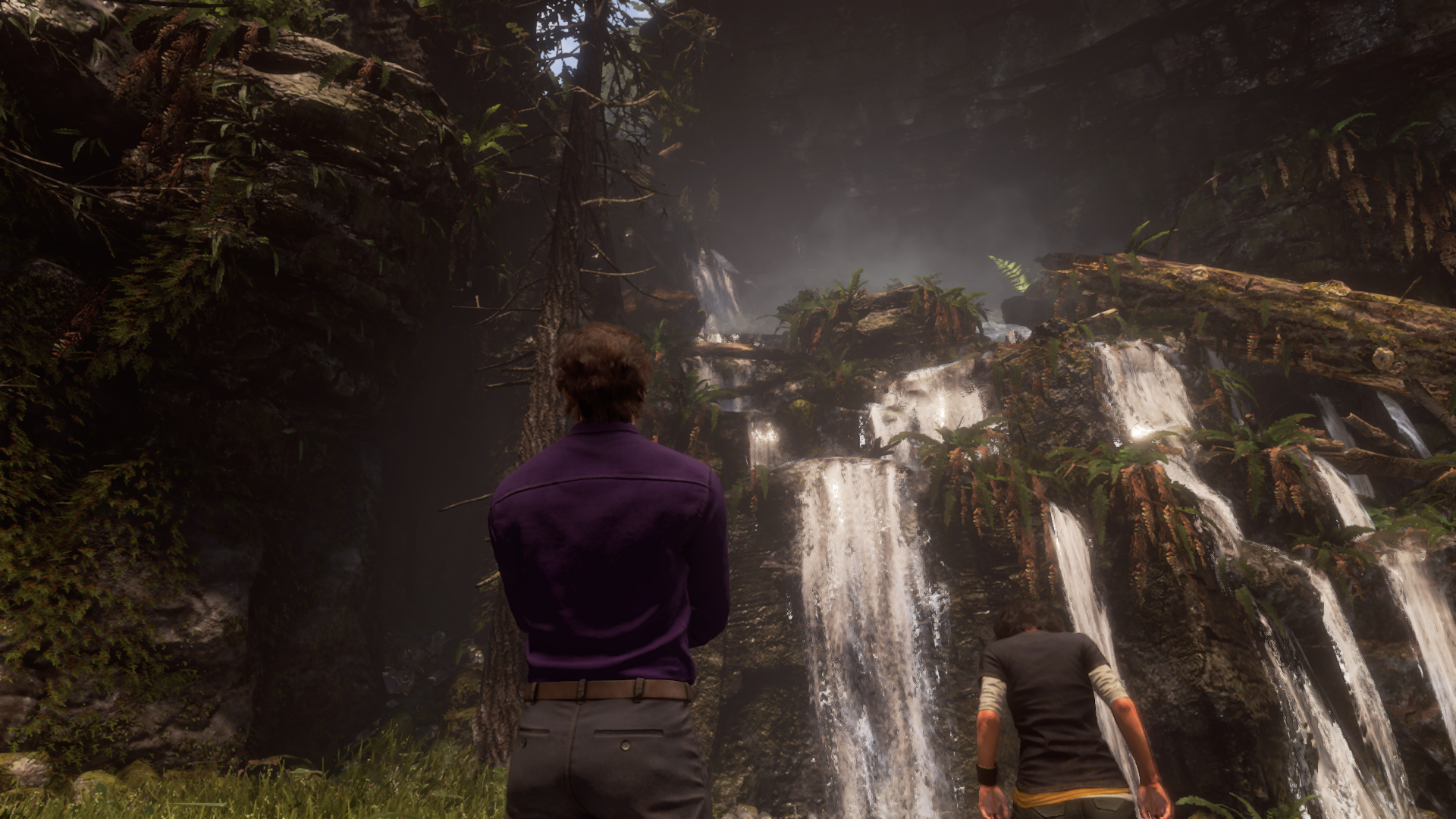 The game's world is divided into regions, each region providing a series of missions. From what I played in the beta, diversity is small. The destination of each mission inside the same region looks pretty much the same, and even places from other regions share a few similarities. The most distinguishing scenarios are kept to the campaign.

Speaking of the Story, I confess that, despite the corny dialogues and barks, I'm intrigued. I surely do not expect this game - any part of it - to be groundbreaking but I can see myself having fun. Kamala Kahn has a funny and determined personality (Sandra Saad is also doing an excellent job in bringing the character to life); watching her growth as she reassembles the Avengers will probably give an interesting show! 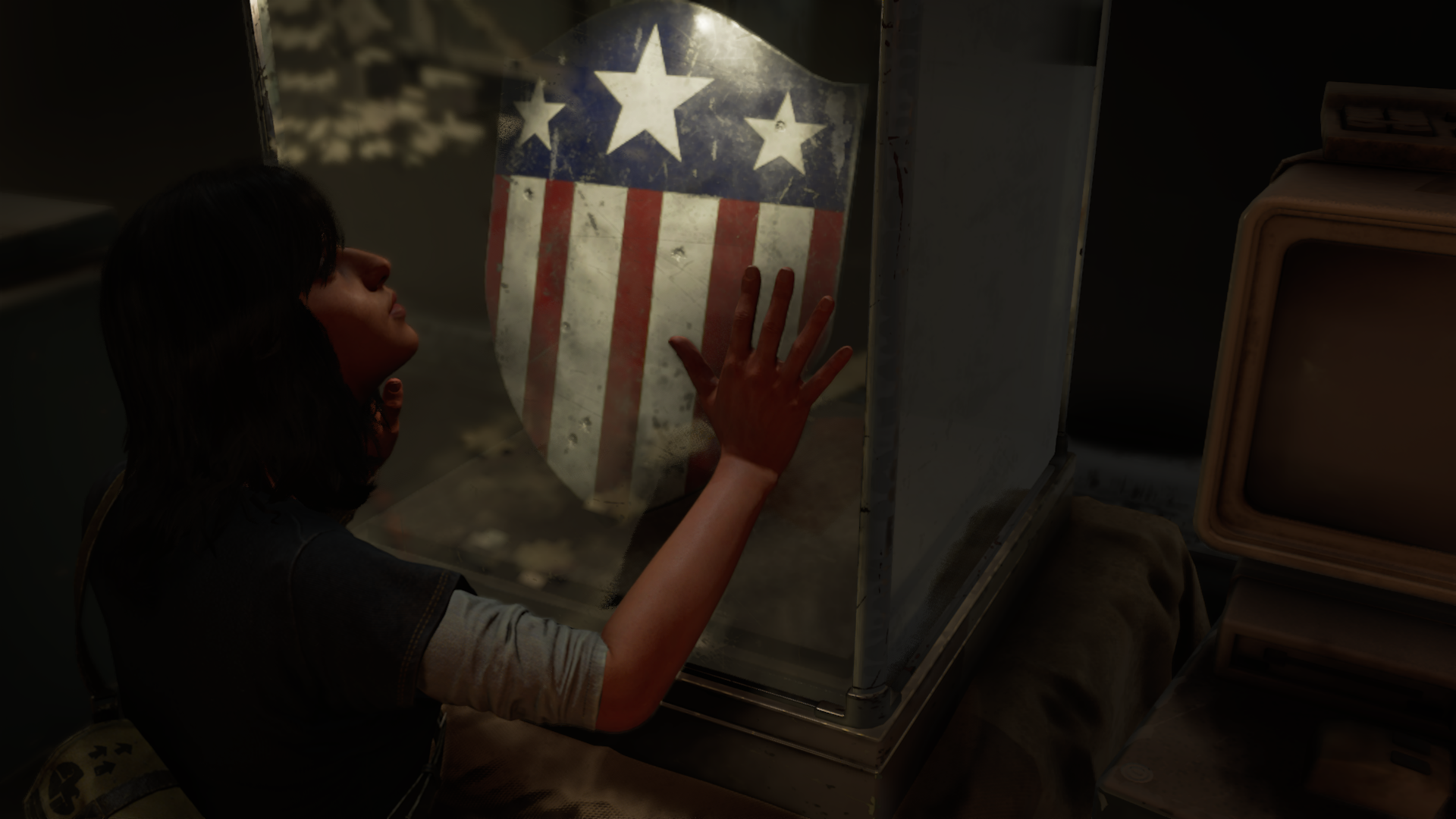 Oh, the dreaded QTEs! This game is one that will have a few of them, especially during boss battles and some spectacular moves during enemy encounters. Personally, I don't mind them. What I find bizarre are the interactions that require you to press and hold a button (Square, if you're on PS4) to, for example, open something. The problem here is that the game wants you to hold the damn button for quite long and unnecessary seconds. And you can tell they're unnecessary because, during most of the time, the character will simply look around or stay idle while you're holding the button. Considering the number of resource boxes we'll have to open in this game, Crystal should consider changing this. 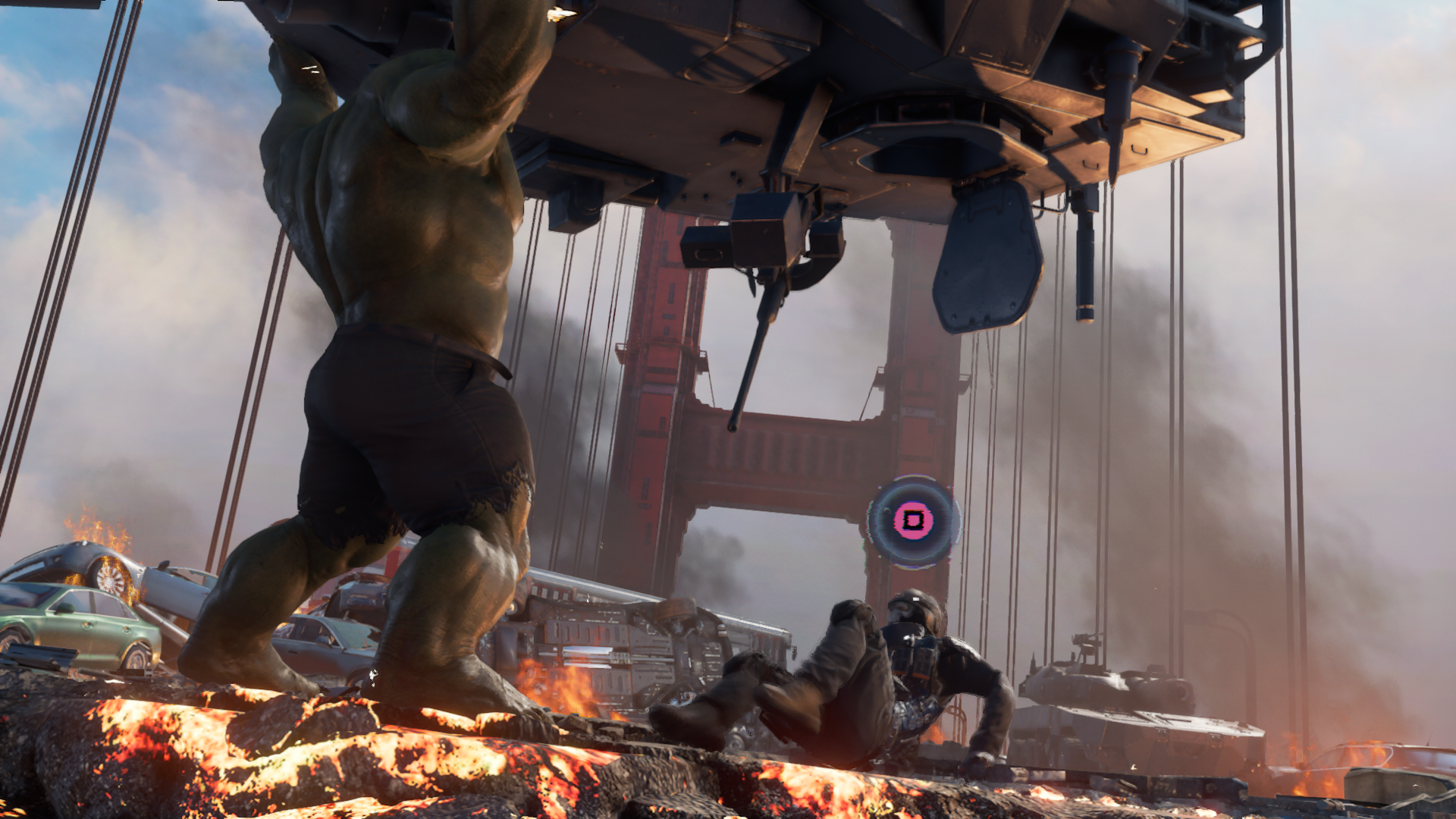 Yeah, I encountered a lot of glitches during this one week. Starting the app for the first time and then struggling to connect my profile with Square Enix already was frustrating and I believe I can include this as a glitch (or maybe a lot of people were trying to access at the same time? Either way, the fault is on Crystal and Square!).

Then, throughout my game sessions, I was surprised by many others, less-than-funny glitches: the screen went black after I unpaused the game, while the cutscene played on the background until the whole game froze; the game froze again at a transition between the game and a cutscene; enemies got stuck in the air or hopped across the screen, one time I searched an entire room for a long time before seeing the tiny little health bar above a hovering enemy; the sound got all disarranged as characters' voices became a long and irritating buzzing sound, obliging me to restart the checkpoint; another time the game got stuck at the loading screen, granting Kamala and Hulk an unending trip to the mission's destination.

On Friday, the beta's first day, I got numerous messages saying that "the connection was lost". I pressed the confirm button and the game continued normally. Crystal confirmed this was their fault; fortunately, I haven't suffered from this in the following days. 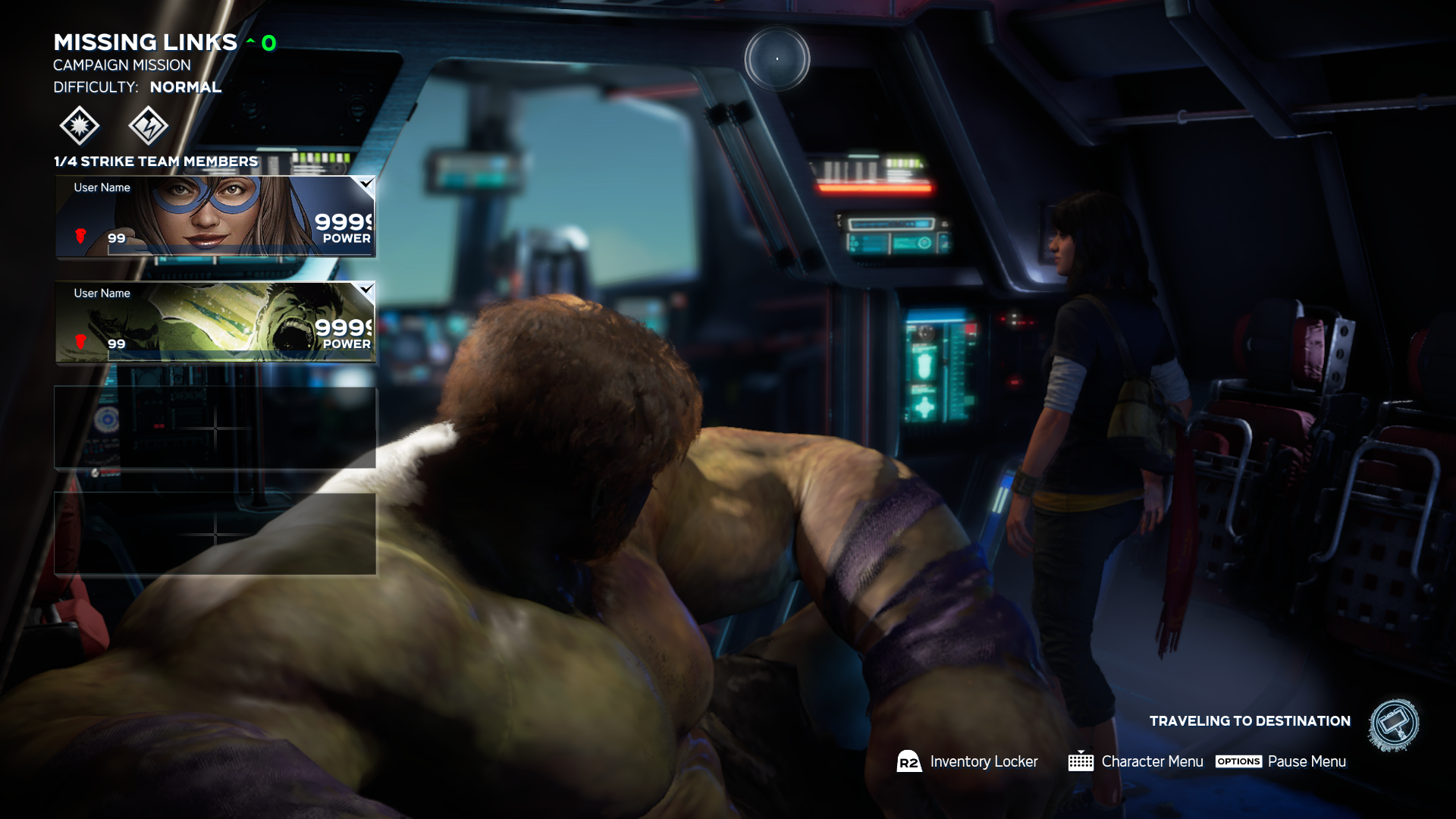 I've tested every character available - Ms Marvel, Hulk, Black Widow and Iron Man. I enjoyed playing with all of them. From the A-Day prologue, Thor and Captain America also seemed interesting characters (Cap even better). But, as it is bound to happen, I have my preferences! Here is a quick ranking: 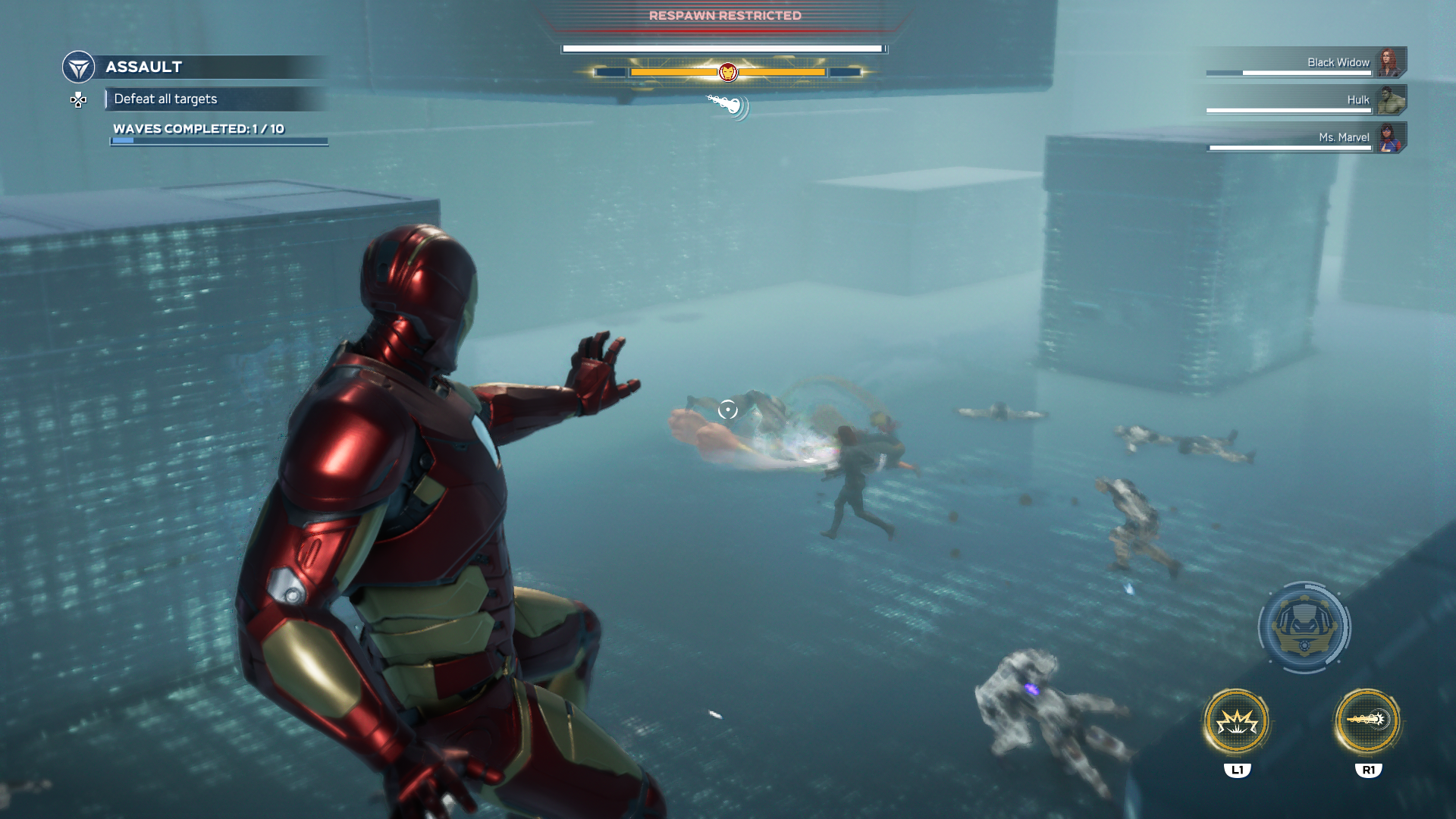 He was the character I least played with, only during the simulation "training" that had my squad destroy ten waves of enemies. I liked Iron Man's mobility; hovering above the hordes and battling opponents mid-air is quite satisfying. I think his super moves could've been better, especially his chest's laser beam. The duration is too short and, while activated, your character becomes too slow, making it hard to truly seize the power of the beam. Wearing the Hulkbuster is amazing, though! 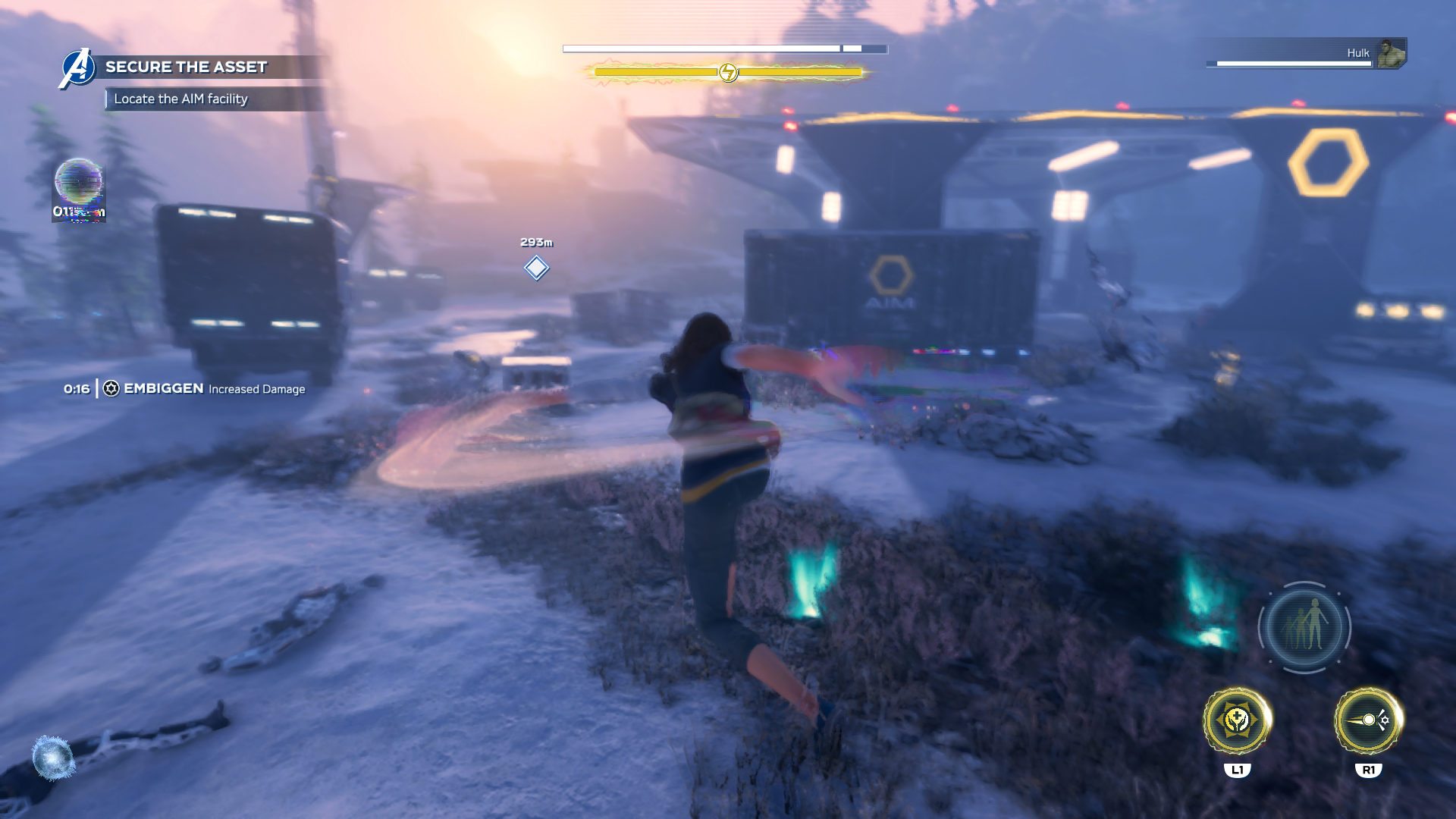 Checking for Skill list, I believe Kamala will be a lot more fun when we start unlocking more combos and signature moves that use her stretching powers. One thing is for sure: jumping around gaps and using her arms as a grappling hook is so cool! 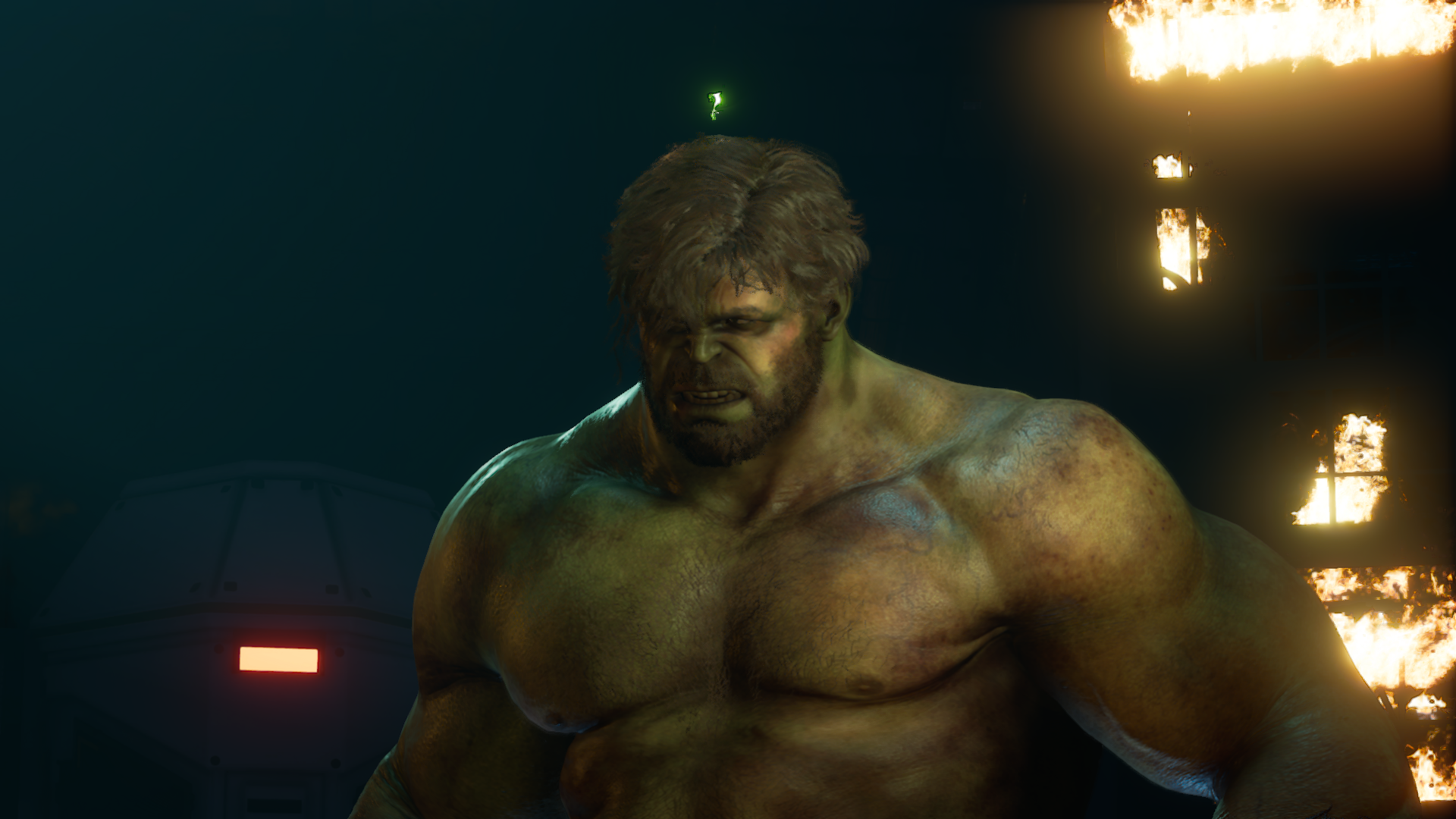 Beating down ant-sized enemies with The Giant Emerald looks a bit of an exaggeration but damn, smashing down everyone and everything with his brute force is quite satisfying! Hulk's super moves are among the best in the Beta. His appearance did annoy me a bit. His A-Day looks are okay but, after that, his face gets weirder, as if Crystal's artists tried to retain more of Bruce's physiognomy and, in my opinion, it didn't work very well. 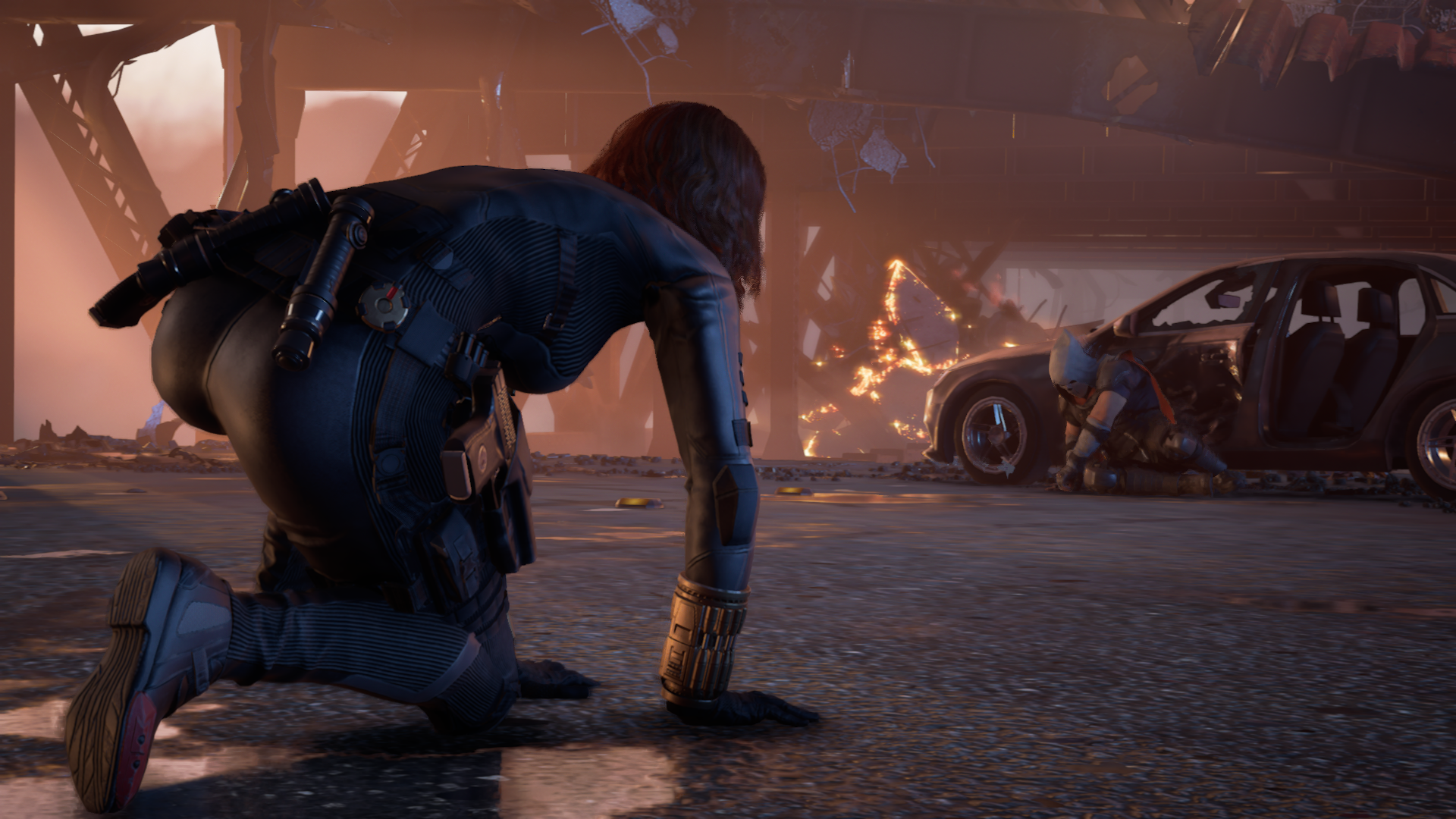 For some reason, I just found really satisfying playing as this spy in the middle of so many other and more powerful creatures. Her parry is the best in the game (so far) and combining her pistols with hand-to-hand combat proved to be quite efficient. Natasha's moves are rather simple and I do hope they give her more tools but, as it is now, she's quite fun to play as! 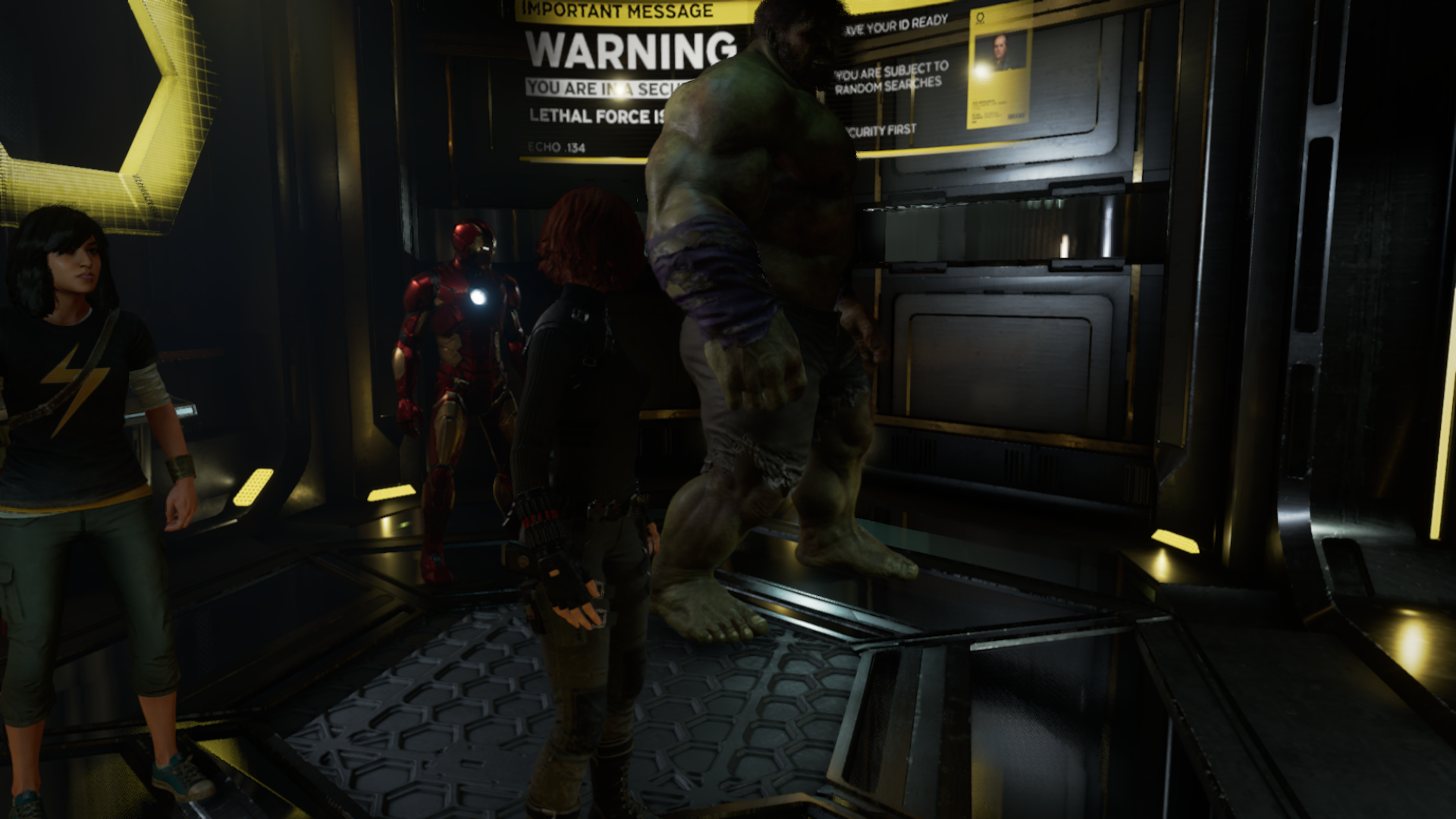 In short, I'd say that this first experience with Marvel's Avengers was good. If it hadn't so many glitches, it would've been far better. I can see myself playing many hours of this, especially alongside friends. However, Crystal Dynamic must refine some aspects of the game and adding a mechanic or two to improve the co-op aspect would do wonders. It's a game that I'll wait for reviews and possible post-launch patches, but it's a title that yes, I'd like to have in my library (unless the final version is, somehow, obscenely worse than what I played in the Beta!).

What about you? Have you played the Avengers' Beta? What did you think? Share your thoughts in the comments section below!