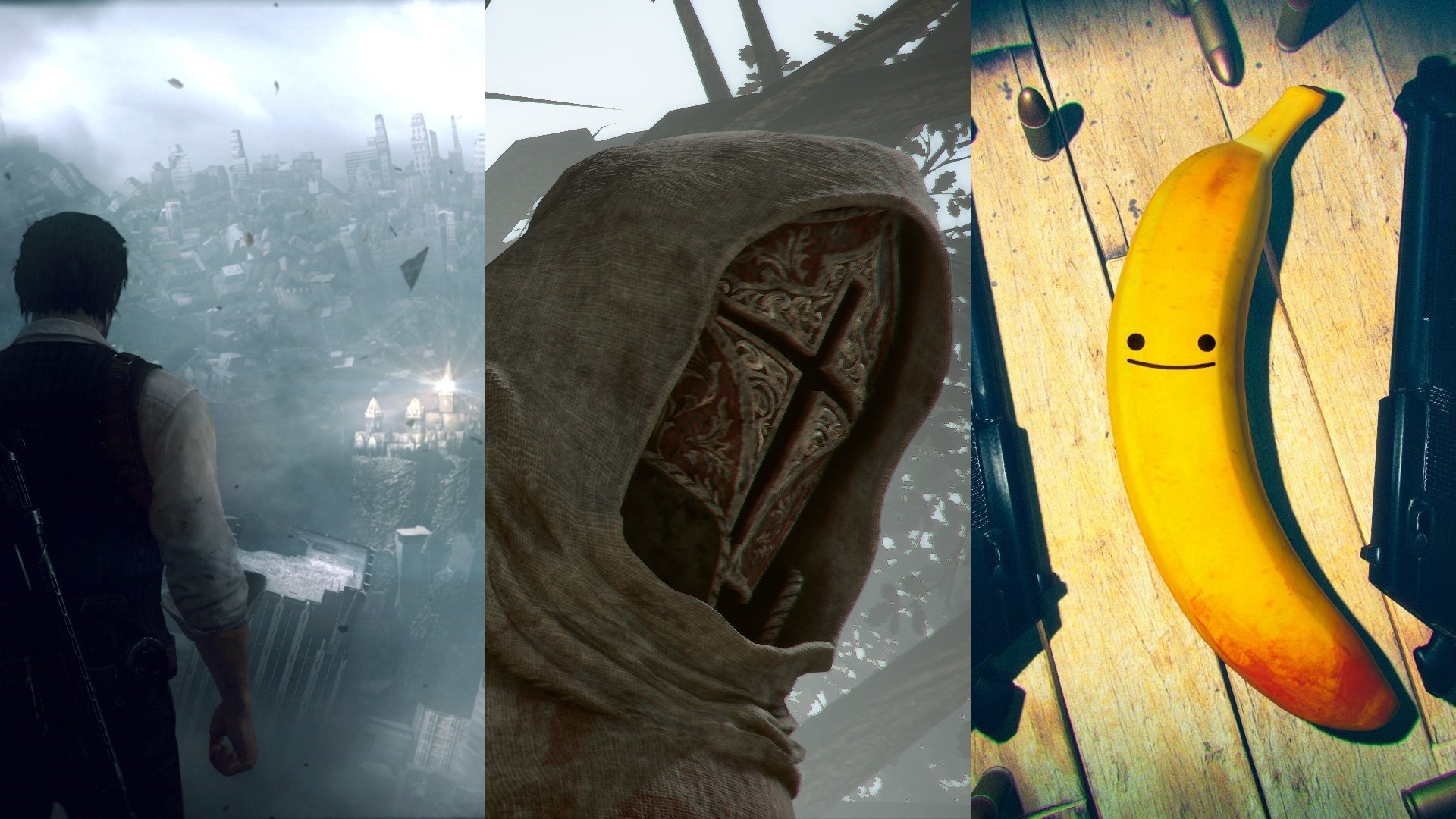 The Evil Within is a third-person survival horror game along the lines of Resident Evil 4 about a police detective being thrown into a strange world after an investigation at a mental hospital.

I knew going into this game that this was a spiritual successor to Resident Evil 4, and it shows. A lot of the DNA between the two are the same, but there are some differences between the two. Just like RE4, enemies have a chance of coming back, but this time around you have the option of burning them with matches. It’s a neat mechanic, but I found it to be rather easy to tell if they are coming back or not compared to the unpredictability of RE4. One new feature of this game is stealth, though it is to mixed effect. Being able to sneak around and get free zombie kills is nice, but there isn’t much communication on whether or not you are in stealth, so I never found sneaking around to be reliable. One last big addition to this game are upgrades. Throughout the entire game, you pick up brain juice, which is used to upgrade various aspects of your character and weapons. The upgrades are a welcoming addition to this style of game, as for it gives a little leeway on play style while still keeping true to its limited resource roots. It’s a pretty faithful spiritual successor, but there are some changes here and there.

I think above anything else, the thing I like the most about this game is its aesthetic. The Evil Within is a mix of noir and Lovecraft, and the two blend really well together. The noir side of the game shows with the characters, their clothing, and the overall mood of the game, while its more fantastical elements shows off some really cool enemies and levels. Personally, I think the lockerhead enemy is one of the coolest enemies in a horror game to-date. On top of all this, the game has a great cinematic look to it with some impressive lighting. Some of it gets weird, like suddenly going from the big city to a medieval village, but overall I really like the style and tone of the game. 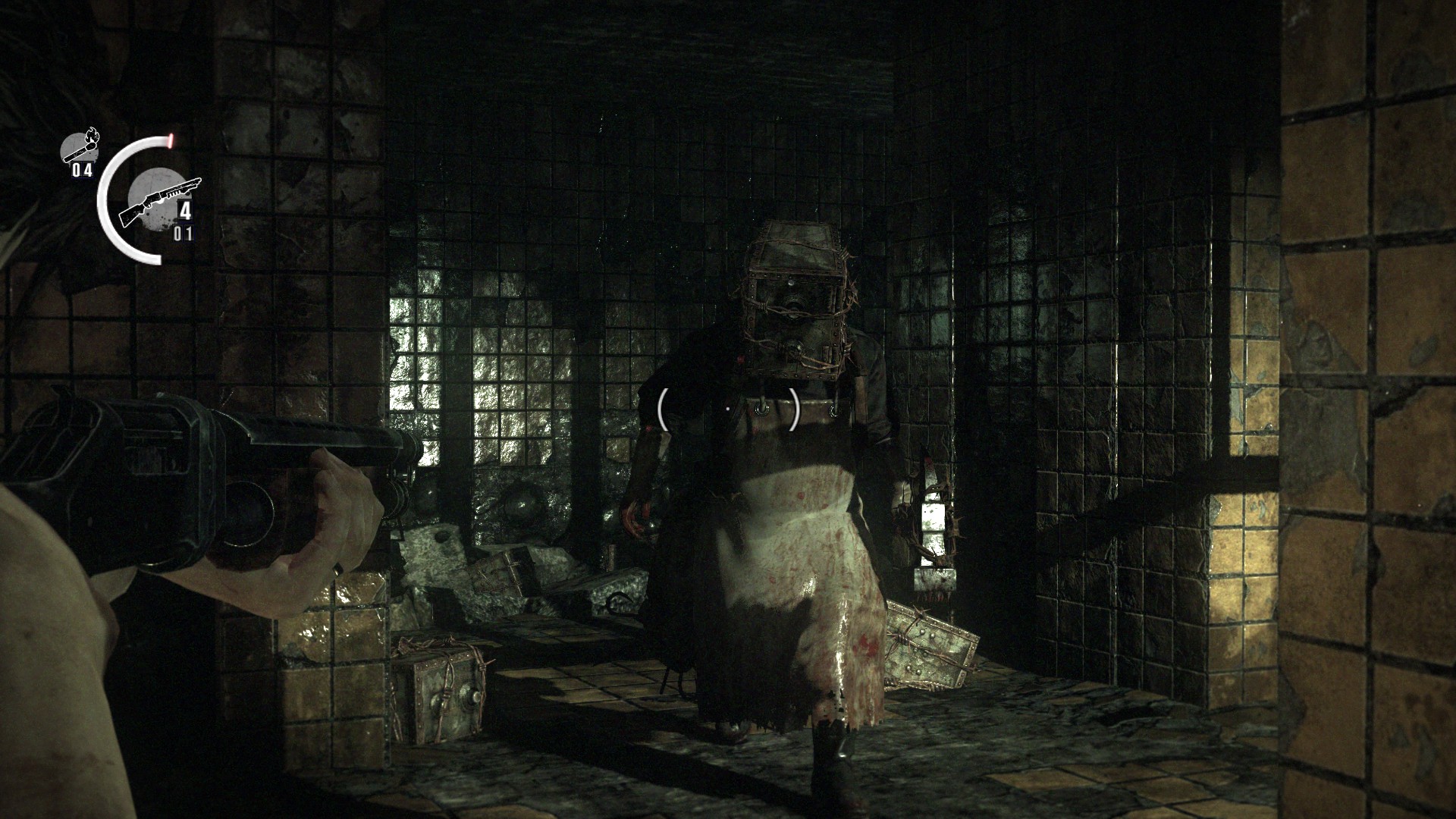 The lockerhead guy is a super creepy yet super cool enemy in the game.

My biggest frustrations with this game can all be found in the second half. Not all of it is frustrating, but there are enough frustrating new enemy types, bosses, and missions to be noteworthy. The chapter 10 boss fight is a particular annoyance, chapter 11 features a bad fish segment and an even worse elevator segment, the Doppelganger is a particularly annoying enemy type introduced late into the game, and more. The second half of the game feels like a weak stumble into the finish line, but I still had an okay time with it nonetheless.

In conclusion, The Evil Within is a fun survival horror games for those looking for more Resident Evil 4. There are a few flaws here-and-there, but there are also some improvements to that formula that are worthwhile. I would recommend checking this game out if you are looking for a fun singleplayer experience.

A Plague Tale: Innocence is an action-adventure stealth game about a girl taking her sick brother across a plague-ridden and rat-infested Medieval France in search of a cure.

Personally, I’m not the biggest fan of kid characters in stories, but the story and characters in this game are fantastic. Trying to deal with the situation at hand while pseudo raising a little brother who hasn’t experienced the world gives a good blend of tense moments and heartwarming ones similar to The Last of Us, and the way characters react to the situation at-hand feels appropriate. Plus, the characters you meet along the way are also complex beings who are easy to attach to. Even some of the NPCs, like the boss fight in the second chapter who is just a soldier who lost his family, are well written. Not many games get me emotional, but the death of one character did because of how well the characters are written. All of this is accompanied by great orchestral music by one of my favorite games composer, Olivier Deriviere, who does a great job at elevating the tone of each scene. The one issue I had with the story were some stiff animations in cutscenes, but overall this game nails the story. 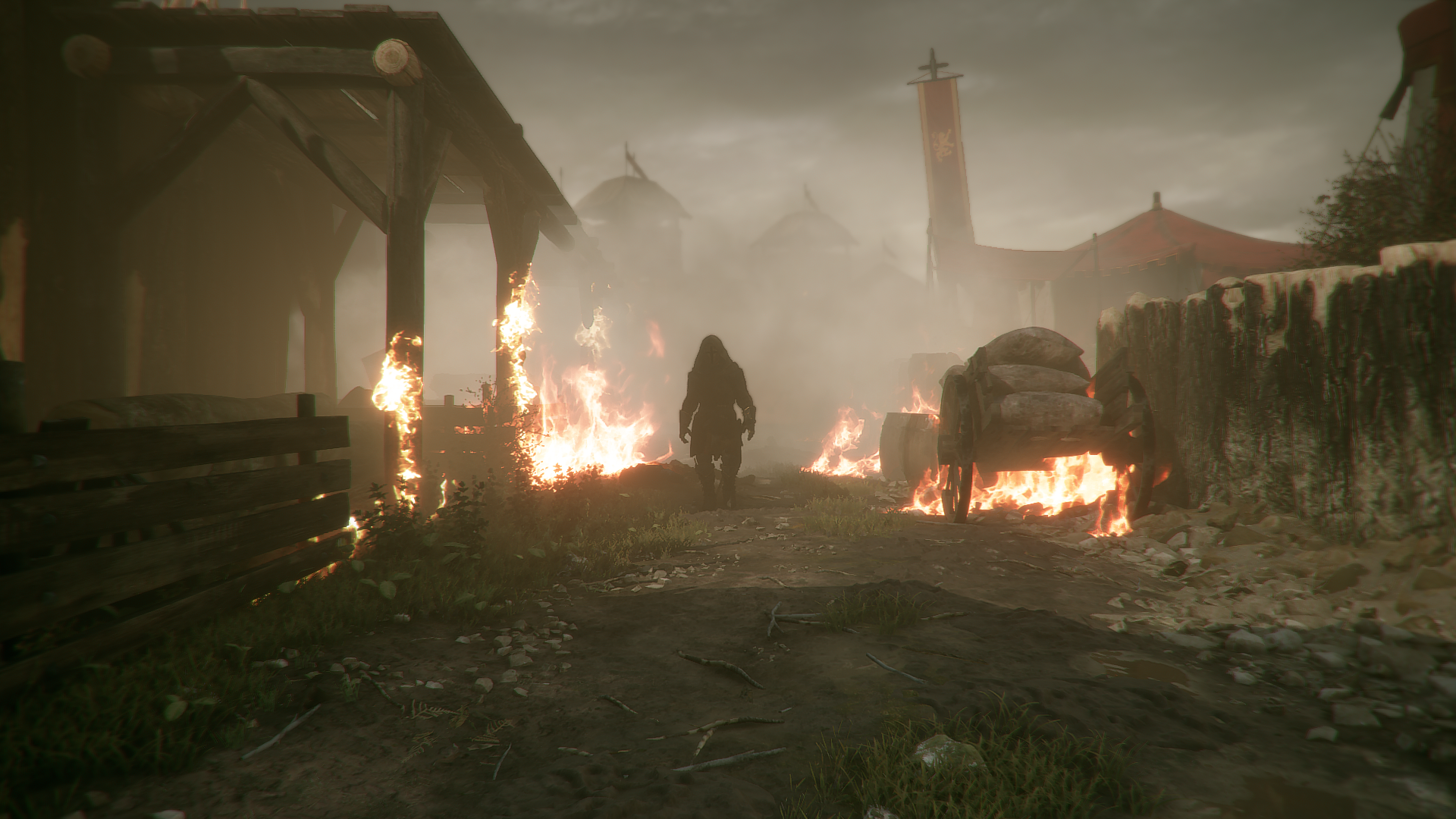 Nicholas is a high ranking Inquisition member trying to stop you.

As part of living in a rat-infested France, you have to deal with, well, rats. Rats play a big part in the gameplay of this game as this almost floor-is-lava mechanic. This form of lava, though, can be manipulated, and it works surprisingly well with the game’s stealth focus. Rats are scared of fire, so using that to either get through areas or take out guards is neat. Even without the rats, however, this game is still a fully fleshed out stealth game with some neat tricks up its sleeve. Throwing pots for distraction will highlight who will be distracted, slinging rocks at metal objects distract guards, the alert indicator above a guard’s head shows when guards will lose interest, tools that can play around with the rats, the ability to command others, and more. As you progress, you get materials for crafting upgrades, a few creative boss fights to complete, new tools, and some new people who join your crew who have their own abilities. Overall, the gameplay is a lot of fun and I am glad it is fully fleshed out considering its focus on narrative.

In conclusion, A Plague Tale: Innocence is a great game that tells a story worth getting invested into and stealth gameplay that is a lot of fun. I highly recommend this game to anyone looking for a singleplayer experience or a stealth game.

P.S. You can find a gallery of screenshots of this game here.

My Friend Pedro is a platform shooter about killing in style with a talking banana by your side.

Going into this game, I knew about the whole ballet of death shtick, but I wondered if that was all they were going to do the entire time. Fortunately, they didn’t, as for this game does a great job at consistently adding in new mechanics. Over the course of its roughly four hour campaign, the game introduces mechanics like ziplines, metallic objects to reflect bullets off of, a skateboard, a motorcycle level, and more. A lot of these mechanics are fun too. A particular highlight is finding a pan, shooting it up to enemies above you, and ricocheting bullets off of the pan to kill enemies. Outside of these mechanics are the various character abilities, such as the ability to roll, dodge-spin, and shoot in two different directions (with the right weapons). While these mechanics are also fun, they get a bit messy to control, and trying to string multiple actions together usually doesn’t end up well. Still, the game does a good job at keeping things fresh throughout. 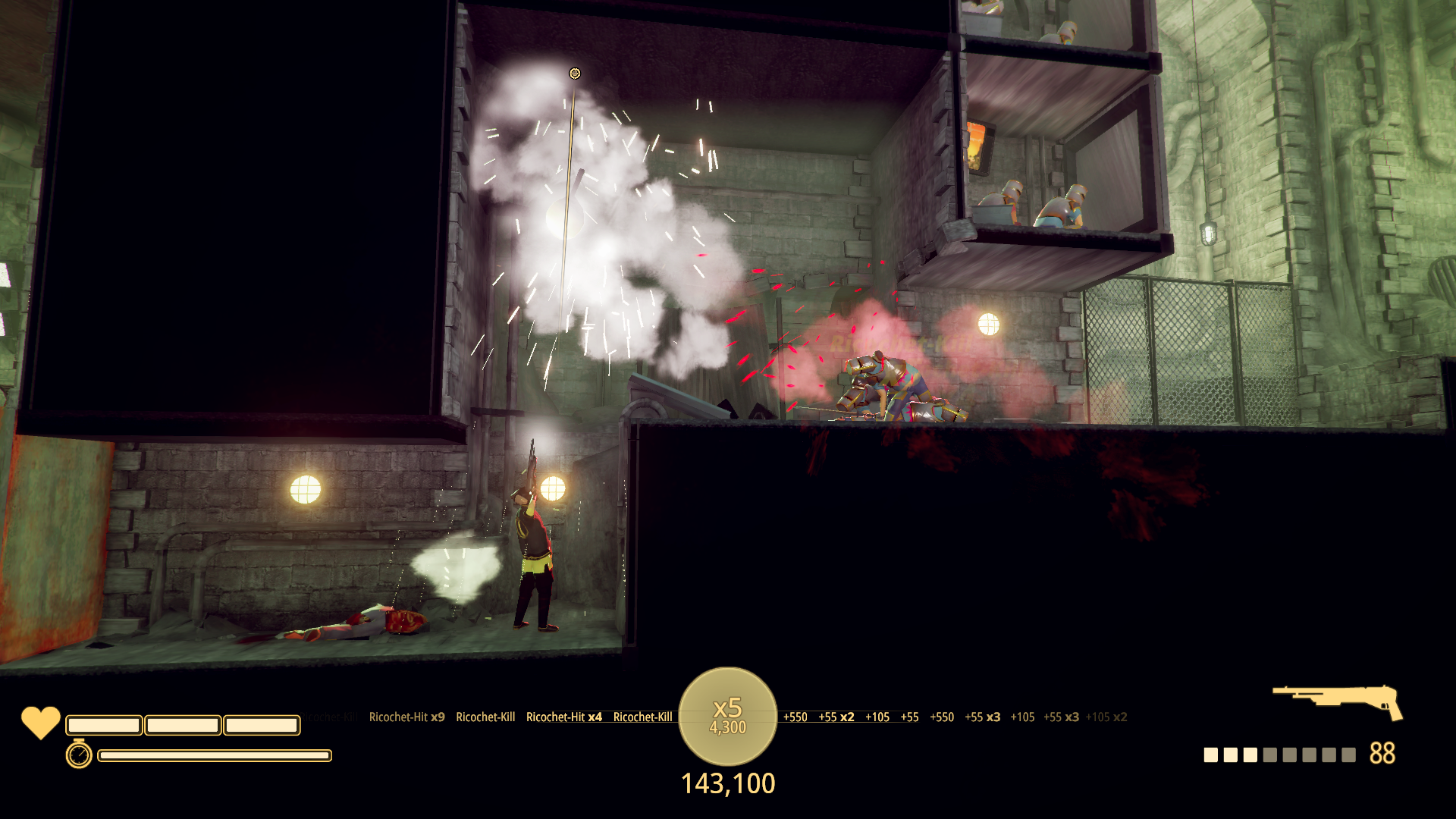 One part of this game I am not as big of a fan of is the theme. The whole talking banana thing doesn’t cut it for me, and there are a few parts of this game that get really into that style that I found annoying. The game takes place in a few locations, but the one worth noting is internet land. It has this “wacky internet” style to it that matches the whole talking banana tone, and I did not like it one bit. I like the whole ballet of death tone to the game, but the banana and the internet land are unnecessarily over-the-top. One cool feature this game does have in regards to its ballet of death theme is the ability to save highlights as gifs. At the end of each level, the game plays what it assumes is the highlight of the game, and you have the option to download that as a gif. It’s a cool feature, but it didn’t work well for me as for it captured all of the wrong highlights for me. I had moments with it where I had a really cool moment in the level, but the game decided that some other random moment was the highlight. It does work some times, and I do have a few highlights saved, but I wish it was better.

In conclusion, My Friend Pedro does something that a lot of indie games fail to do: keep the gameplay fresh. Instead of just relying on one cool mechanic for the entire game, it keeps bringing in new ideas that keeps things fresh. It does falter in a few areas, but this is overall a fun indie shooter worth checking out.