If you know me well enough, or if you’ve known me for long enough, you’ve likely heard me say something along the lines of, "Extreme Pinball is by far the best game Epic has ever released.” Then I played the alpha demo for Jazz Jackrabbit 3, and while what I say remains true, it suddenly feels a bit tragic knowing that Jazz 3 will remain unreleased since it's at least as good as Extreme Pinball. I don’t have any nostalgic ties to the Jazz Jackrabbit franchise. I wasn’t really a big PC gamer when I was a kid, and based on the sales of Jazz 2 it doesn’t seem like it was all that popular among its target audience anyway. The original was released on DOS in 1994 with the sequel launching on Windows and MacOS in 1998 (or 99 depending on the region). A third Jazz Jackrabbit game launched, but it was a reboot of the franchise so far removed from the series roots that it was a Game Boy Advance exclusive in late 2002. At those times, I was busy with Super Star Wars, Final Fantasy VIII, and Pokemon Sapphire respectively.

The Jazz Jackrabbit games which made it to market were all mascot platformers, clearly. They followed the titular Jazz Jackrabbit on his quest to save his wife, his wedding ring, and go on various space adventures respectively. Since he’s a rabbit, Jazz moves really quickly. Since he’s an animal mascot from the 90’s, he’s got attitude, and neon colored fur (green). Since I don’t feel like beating around the bush anymore, I’m going to say that his games were a bit more than inspired by Sonic the Hedgehog in terms of gameplay, and Super Mario in terms of plot and enemies. The big bad of the series, Devon, is a giant turtle after all. By the end of the second game you’ve beaten him twice, and are all ready to marry the Crown Princess Eva Earlong for a happily ever after. 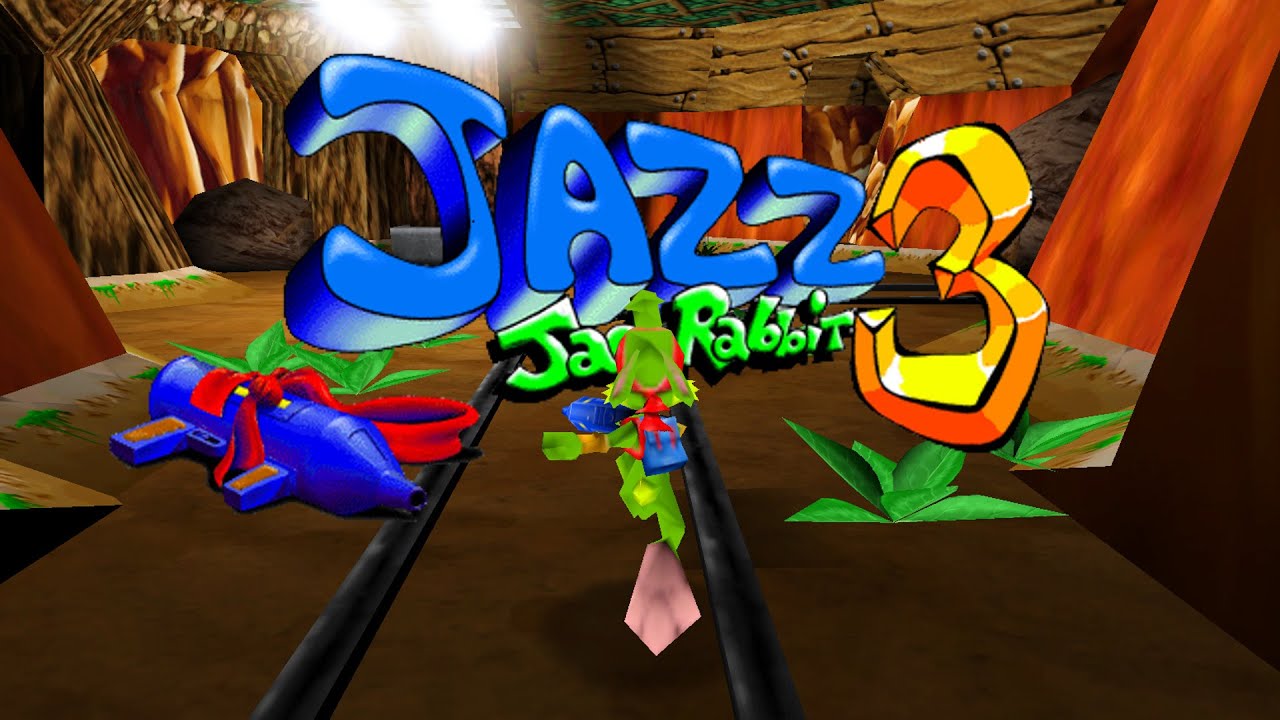 (This is a very shiny game, but that's kind of what you should expect with Unreal)

Jazz Jackrabbit 3 would have resumed some time after the second game, I’m unsure how long exactly, but the plot is about Devon trying to kidnap Eva again, and your kids too. Devon’s plan was to take your family into the past, but instead he wound up in another dimension: the third dimension to be specific! For a demo of such an early production, there’s a lot more here than I expected there to be. I expect this was shopped around a bit after Epic said ‘no’ to publishing this one. You start out in a small town, a local mine acts as the tutorial area which teaches you how to jump, climb, swim, shoot, charge your blaster, but I don’t recall being told how to change my weapons. At first I thought Jazz 3 took place in a medieval setting too considering the pub was literally called ‘ye olde’, but almost directly outside of the town is a rocketpad and observatory. Not that there’s a rocket to explore or a science-themed area. There’s a relatively large lake to swim around in, a forest to wander around in, a castle to wander in, and the castle has a basement. There may be more to it than that, but I didn’t see everything there is to see in this demo.

It took me a while to find a resolution that I really liked and it took me a little bit longer to realize that Jazz 3 doesn’t like to be played in full screen. On full screen, no matter what the resolution or detail options, the Jazz 3 demo ran like a slideshow. While playing windowed though, even on the highest resolution and with everything cranked up to maximum, the frame rate was still wildly inconsistent but on the other end of the spectrum. The game either ran quickly, or way too damned quickly. It seemed like enemy monsters moved more quickly too depending on the framerate. I would be lying if I said I knew how the Quake engine works, but is this usual? (The full Jazz 3 would have had a similar character selection screen. Imagine Spaz and Lori in 3D...)

After doing a lot more exploration than I was expecting, I started running into enemies. I wasn’t expecting to find enemy turtles, but there were a ton of then, and they would just charge at me. Sometimes they would come from around corners where I couldn’t see them coming. If you fail to blow them away with your X-Buster they’ll hide in their shell and just be invincible for a few wasted seconds. The next most common enemy type I ran into was a very human-looking lizard thing. They move quickly too, and attack with a flurry of punches. They don’t have any means of defending themselves though, so they go down fairly smooth. On a bridge outside of the castle, I was attacked by some flying enemies who didn’t seem to be able to hit me, and who were tough to aim at. Finally, there were enemies who might have been bosses. They looked like the lizard men, but they had a metal-like texture all over their bodies. There was a red one who attacked with fire-based bloom lighting, and a blue one who attacked with ice-based bloom lighting. When you beat those two you actually get a fire and ice item, but I didn’t really figure out how to use them. There didn’t seem to be any instances where they might have been useful though, so no harm, no foul I guess.

I don’t want to be accused of ‘port begging’ but I really think the original Jazz Jackrabbit would have been well received on consoles back in the 90’s. The original was probably a little late for the Genesis and Super Nintendo, but a remix of the first two could have sold well on the Playstation and/or Saturn. While I played the demo for Jazz Jackrabbit 3, it reminded me a lot of the Dreamcast games I used to play, mostly Sonic Adventure 1 and 2. The shooting felt fine, and the exploration was more robust than what I expected, especially for a demo of a game still in alpha. A full Jazz 3 could have been huge in scale. The worst thing about the demo was probably the platforming, but I think the frame rate and game speed made platforming as problematic as it was. Playing this has made me curious to try the older games, maybe not the GBA one, but the DOS original and the Windows sequel look fine, and the soundtrack for all 4 of the Jazz games I’m aware of (I’m including the demo, yes), have really impressed me. In a world where Shaq Fu 2, Shenmue 3, and James Pond can come back out of nowhere, it’s likely that Jazz will come back too sooner or later. Probably not this one...maybe not this one...I’m anticipating an announcement soon after I post this.