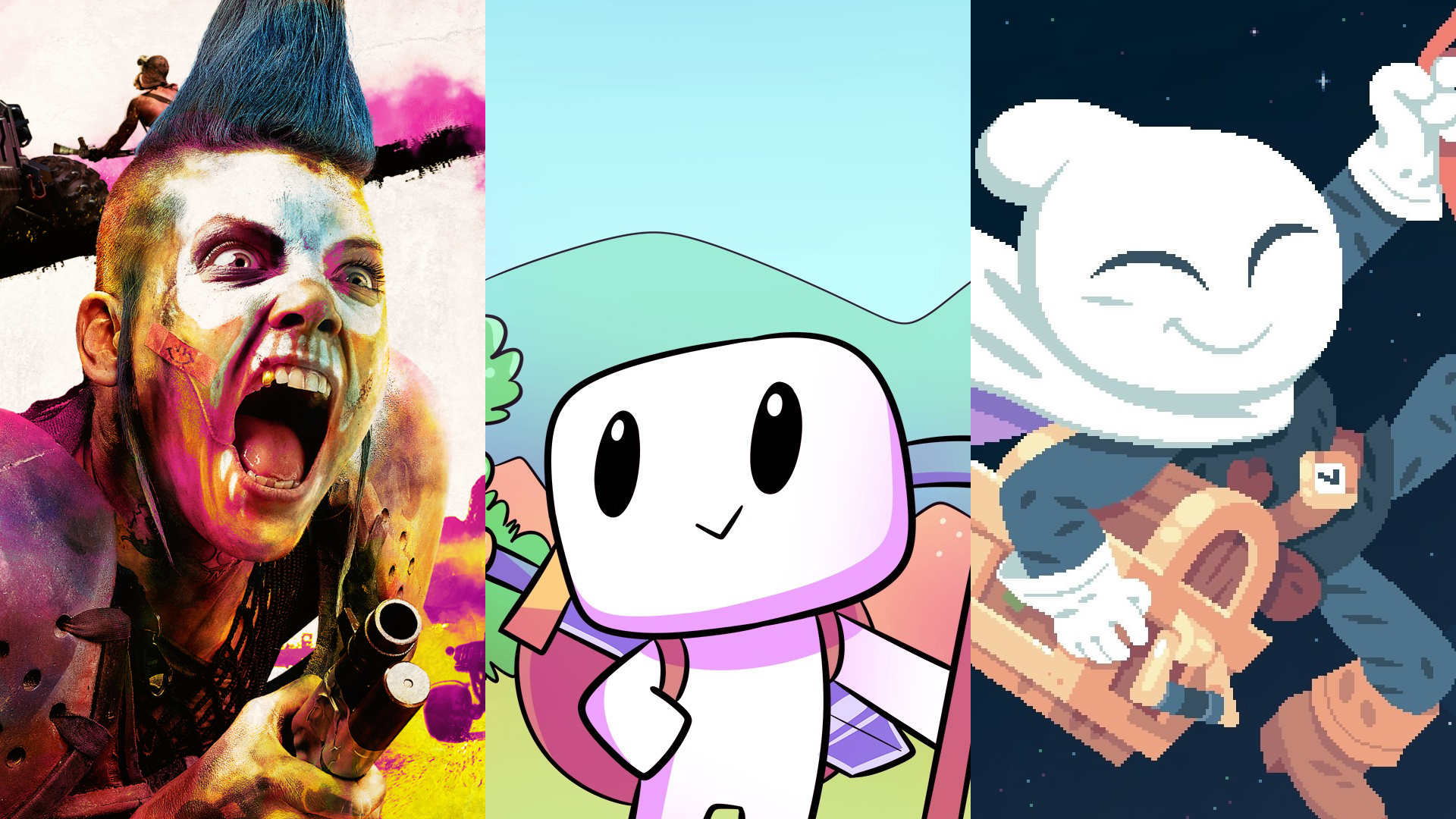 Rage 2 is the first-person, open-world sequel to Rage that follows the last Ranger of Vineland as he or she takes revenge on General Cross and the Authority after they raided Vineland and killed the Ranger’s Aunt.

A basic revenge plot isn’t that remarkable, which I feel is the theme of this game. There are many elements of this game that feel like one in a sea of many. The story, for example, ranges from forgettable to poor. The main campaign is laughably short, even with the middle of it padding out the run time. On top of that, the ending is pretty bad too, as for it’s sudden and anticlimactic. Outside of those two things, the story is as basic and forgettable as it gets.

Story isn’t Rage’s strong suit, however, so it didn’t really affect my time with the game that much outside of the short campaign. So, if this game has a short campaign, what is there to do? Plenty. The world is filled with activities to do, ranging from attacking vehicle convoys to destroying large turrets, and a bunch in between. A lot of the activities are pretty basic, and some are even copied over from Mad Max, but I still had fun with them. Also, a few of the activities like bounty hunting and convoys are generated, which I found neat. Plus, the world itself is diverse, and the color palette is vibrant with an emphasis on pink, which made everything pop. The one thing the open world is missing is a stats sheet showing 100% completion, which I feel is needed considering this game is designed for 100% completing the world. Still, the open world and its activities are fun to explore and complete, even if it is rather basic. 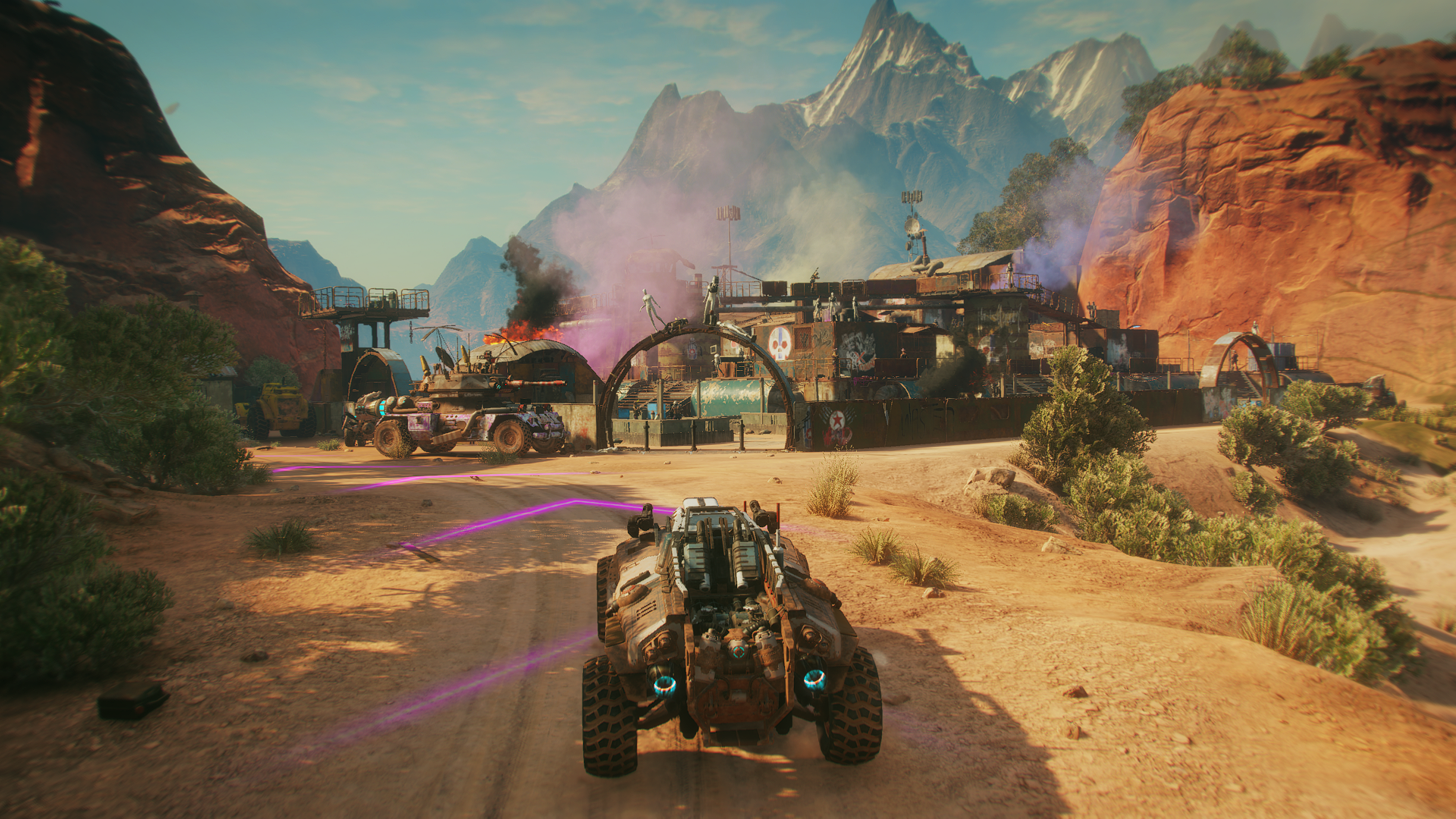 The main reason why the open world is fun to be around isn’t because of the activities though. What makes it fun is the combat, which I found to be a blast. The shooting is tight, and the overall combat experience feels fast-paced similar to Doom. Some of the weapons are pretty basic, but there are some cool weapons in the game as well, such as a revolver whose rounds burst into flames on command and a dart gun that pulls enemies around. Mixed with the gunplay are abilities like dashing, floating for a second while aiming down sights, slamming the ground, the ability to push enemies back with a shockwave, and more. Combat for me usually consisted of a mix of the two, and that combat cocktail is what kept me interested in the game more than anything else. Accompanying the combat are a bunch of upgrades that improve weapons, abilities, stats, vehicles, and more. Speaking of vehicles, Rage 2 has slightly-smaller interest in vehicles compared to the first game. While there is fun car combat similar to Mad Max as well as some unique vehicles like the mech, I found the driving to be floaty. Driving in this game doesn’t quite have that Mad Max movie feel that the first game has, but I’m fine with it considering the strengths of on-foot combat.

In conclusion, Rage 2 isn’t a great game, but it isn’t a bad one either. It’s mostly unremarkable, but at least that’s better than being broken or bad. The combat is an absolute joy to play though, and I think it saves the game from mediocrity. In the end, I would recommend this game on a discount; or in my case, if the game is in a subscription service like Game Pass.

Forager is a top-down game that takes many inspirations and is about starting with nothing and building up from there by farming, crafting, mining, and more.

Forager is a game about expansion. You are constantly expanding your land mass, your skills, your building capabilities, and so on. While there is no real end goal to expansion (other than keep expanding), it does offer plenty to do to get there, which is the highlight of this game. There is always something to work on in this game; whether it be filling up the museum, making materials to build a new building, trying to make as much money as possible to buy new land, and more. As I progressed through the game, I became more and more impressed by how advanced the crafting gets. I started with a basic furnace made of rock, but later on I was dealing with creating banks, making plastic, and trying to create as many mining rods as I can. On top of using the resources harvested or created, you can use them to fill up a museum, which for me meant something else to work on. The building side of this game isn’t perfect though. The area tends to overcrowd with resources to harvest, making it frustrating to move around. There are structures later on in the game that alleviate this issue, but it never truly goes away. Also, buildings don’t have descriptions as to what they produce, which I found pretty annoying. Finally, I found breaking down certain structures like bridges to be impossible (at least on the Switch anyway), as for aiming on specific objects in this game can be a nightmare. 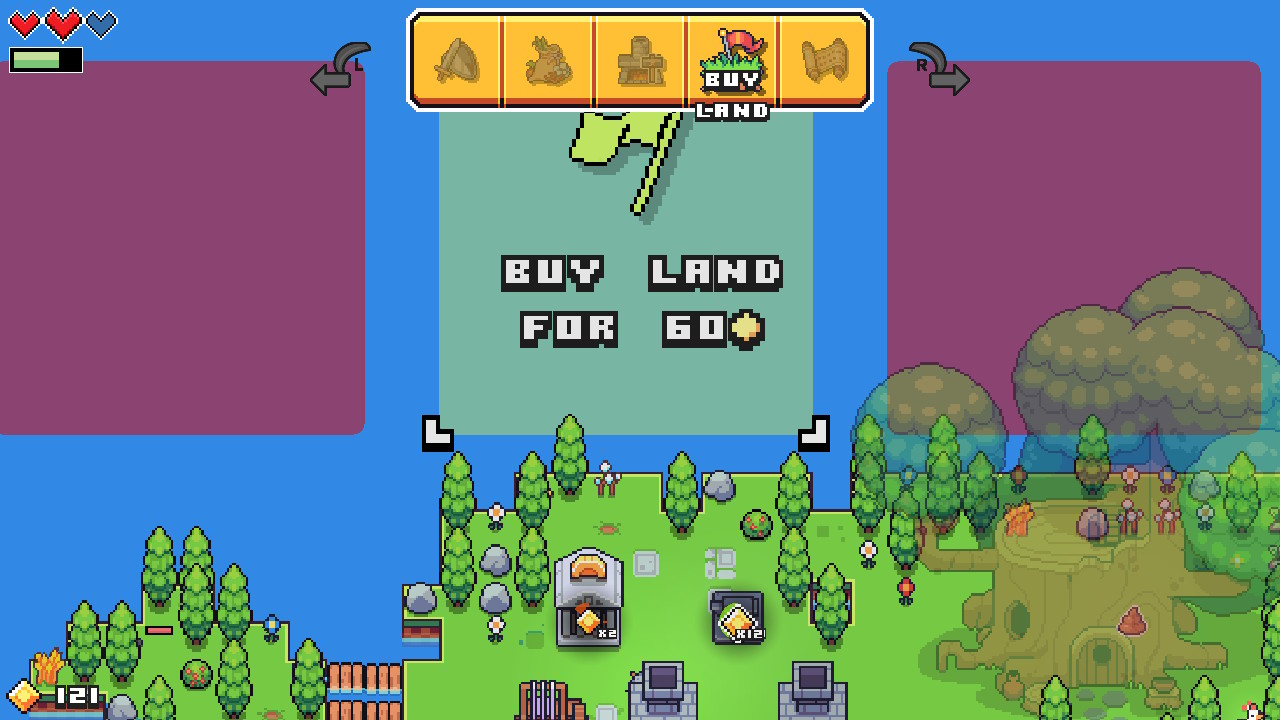 Expansion isn’t the only thing you do in this game though. The other major aspect of this game has to do with combat, puzzles, and dungeons filled with the two. The puzzles are fun to solve, but the combat isn’t great. While the sword does a wide arc, it still is hard to aim and hit enemies. This didn’t matter for me later on in the game, though, as for even boss fights were too easy because of my high health and upgraded tools. Not all of it is bad though. The one highlight of combat for me are the elemental rods, which have various effects like lightning attacks, ice attacks, and even the ability to spawn skeleton enemies. While the puzzles and combat aren’t terrible, and they do offer another thing to keep you distracted, I believe the core of this game lies in the expansion.

In conclusion, Forager is a fun game to occupy your time and give you something to do. I enjoy games that give me a constant flow of activities to complete, and this game is no different. I am disappointed in the combat, but it isn’t too bad either. I would recommend this to anyone looking for a fun, time-filling indie experience.

Flinthook is a platforming roguelite about a pirate hopping from ship-to-ship in search of treasure and a bounty.

Indie rogue-lite experiences feel like a dime-a-dozen these days, and this game doesn’t really feel that different, but there are a few details that stand out. For starters, I like the pirate-meets-space aesthetic, and there is some good music to match. The main feature of this game however is the grappling hook, which can be used on hooks found throughout all of the levels. The controls took some time for me to get used to, but once I got a handle on things, I found the grappling hook to be a lot of fun to use. The game is an equal mix of platforming segments and combat arenas, and the grappling works well for both. There is also a slow-mo ability which is used to get through certain walls, but I found this less useful than the hook. These two features are mainly used in platforming, but they also come in handy in combat. Grappling around and dodging enemy attacks is also fun, but I think the combat overall is the weaker of the two gameplay elements. Shooting is fun, and the boss fights are cool, but the common enemy types are a bore, and I found myself a little bit annoyed with enemy encounters over time. Still, the gameplay overall is fun, and the grappling makes both the platforming and combat better. 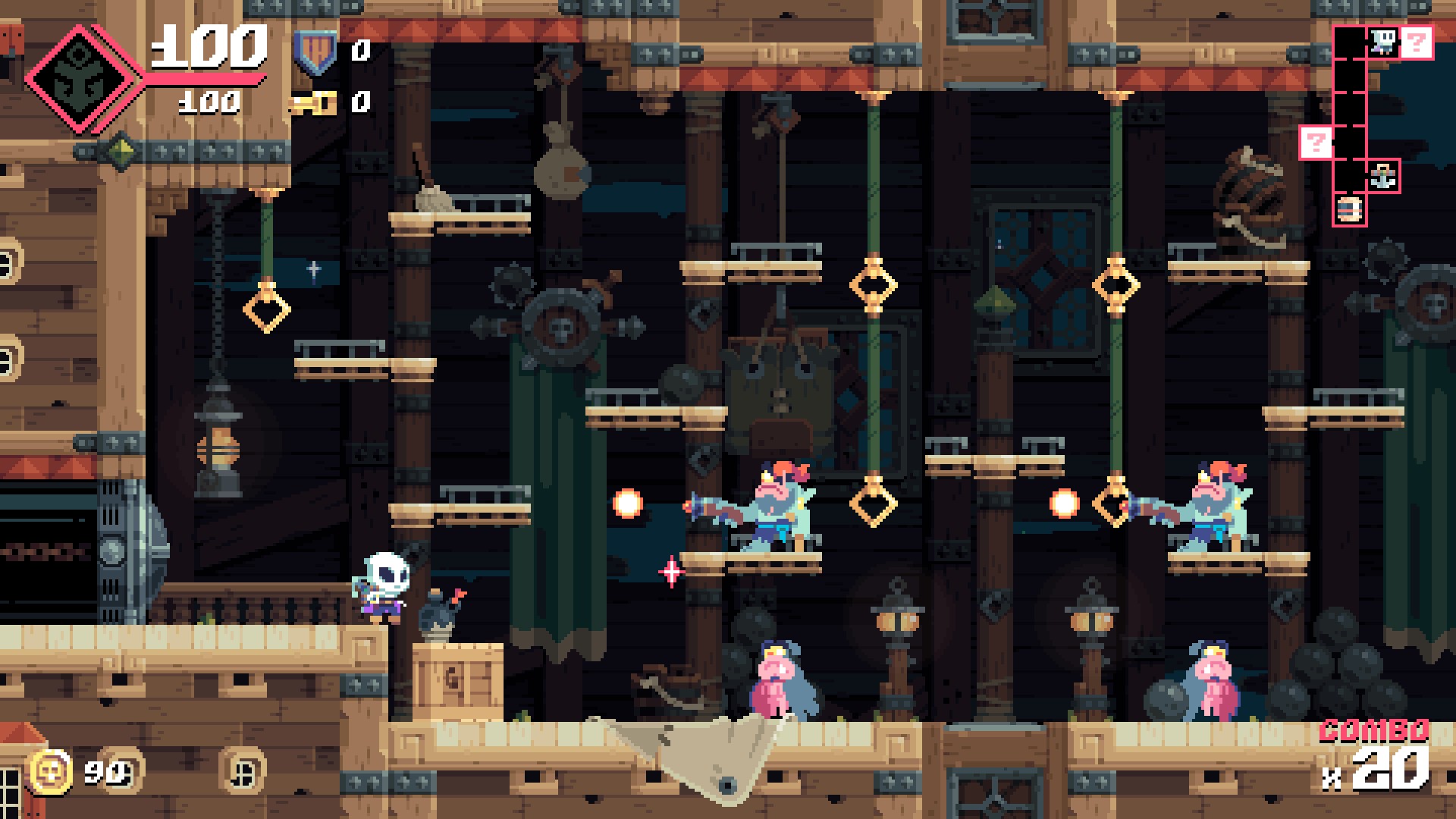 Every room is filled with hooks to grapple to.

In terms of the levels, I found them to be pretty solid, but with a few flaws. Since this is a rogue-lite, the order of rooms change around with each playthrough. For some games, repeats of the same room happen faster than others, but I think this game has a large enough room variety to keep the game fresh. Also, there are modifiers that are added to each level that is displayed before entering it that change around the levels as well. These modifiers are neat, but they do lead to an issue with the game: a lack of communication among items. Not only do these modifiers not explain what they do to the level, but items found in the levels also lack descriptions. I kept going back to the game’s wikia page over and over just to see the effects of each modifier before starting a level, which got annoying fast. That isn’t the main issue I had with this game, though, as for I found the overall experience to be forgettable. Sure, there are things that make this game stand out; but this game feels like one in a sea of many, and I found it hard to motivate myself to keep playing.

In conclusion, Flinthook is a fun game, but one that is hard to remember. It’s the type of game you find in your library, play for a few hours, put down out of boredom, and only remember it a year later when you scroll through your library in search of a game to play. I would check the game out on a steep discount or if you already own it, but I can’t promise a fulfilling experience.