I'm going to start upfront by saying that I don't like this game. I know people are going to criticize me for it, but this is my opinion of how I feel about this game and Square-Enix's continued failed attempts at an action RPG.

FF7R follows Cloud as he joins his first mission with the organization known as Avalanche as they attempt to disable a Mako Reactor in Midgar. However, something goes wrong and the entire reactor is essentially destroyed instead of just disabled. This is revealed as an inside job from another perspective, but our characters do not really know that. Cloud has freak outs about a guy named Sephiroth and we learn he regularly hallucinates for some reason. He then meets a girl who is haunted by ghosts. After Jessie steals supplies from another base and Cloud, Biggs, Jessie, and Wedge are saved with the help of other Avalanche branches, a second reactor bombing goes wrong and Cloud is presumed dead. However, he is alive and is discovered by Aerith. Cloud eventually makes his way back and finds Tifa heading to Don Corneo's place. Cloud dresses up to sneak in as well and they confront Don Corneo. Cloud, Aerith, and Tifa learn that Shinra plans to drop part of Midgar to Sector 7 and crush it. The group fails to stop the dropping of the plate and Aerith is captured because she's a Cetra (ancient mako controlling people).

Now, the group goes to Shinra HQ to rescue Aerith. Sephiroth shows up. The strange ghost like creatures appear again and we learn that the ghosts are called Whispers who are trying to ensure that time flows a certain direction. The Whispers are defeated, but Sephiroth utilizes them to empower himself and they fight. Sephiroth is defeated and Cloud hallucinates about the past and the future and somehow all the Whispers in the past die and Sephiroth and Cloud's post fight conversation is a dream. To be continued...

One issue I have with the story is that Cloud feels like a character that is trapped in someone else's story. We get a little bit about him early on. But, the perspective quickly changes and we stop seeing the hallucinations that he has. He quickly becomes a background character as the members of Avalanche take agency and Cloud just ends up being dragged around by everyone else. It definitely felt like someone else should have been the main character the whole time.

The graphics are definitely the stand out of the game. The environments are detailed and so are the characters. You can even run into many things and knock over things like boxes in some areas. The cutscenes all use the same in game engine, everything looks great. Narrow pathways that you are forced to slowly cross essentially serve as disguised loading screens. Boss battles are cinematic in nature as their transitions are treated as cutscenes that occur at certain health intervals. Summons are spectacular when you can use them. The only major downside is that the areas are narrowly confined and it makes the world feel quite small. Now, this is where the game starts to feel off for me. Why? FF7R is an action game with more than the average RPG elements tacked on and not in a good way. The areas are linear and filled with narrow pathways that essentially guide you from one spot to the next outside of select hub areas. It feels more like you are running between rooms that are connected through a narrow path like in a beat em up.

The targeting system does not help it either. It uses a very dated form of action RPG hitboxes. For ranged characters like Aerith and Barret, this is not a problem. But for the close ranged fighters of Cloud and Tifa, it is a problem. Tifa will struggle to hit many things that are considered as airbone due to her shorter reach and the tendency of flying enemies to move fairly quickly. This in turn is where other things start to feel bad because of the semi-auto system utilized by the game instead of a manual one. Cloud has wind up times on a lot of his attacks that make it hard for him to hit faster moving enemies with his special moves. The same issues applies to dodging attacks. The weird hit boxes means that dodges end up failing a lot and you are better off just blocking since that builds ATB as well and just roll when for you want to get behind a slower enemy.

The biggest issue for me comes from the fact that the ATB bar needed to use skills and spells requires you to swap around your characters a lot to build them. If you don't, your allies don't even charge their ATB bar, even when they block attacks. Considering that you need them to use skills, spells, and items, this seems like a massive oversight. It would have been better to just have one ATB bar from which everyone draws upon as a resource if this is what they were aiming for. Instead, it feels like I am using three characters in which two are useless at any given point because I have to micromanage everything that all three characters do. To make matters worse, there is not even an AI adjustment system that lets you have your allies do certain actions like heal when someone falls under half HP like other RPGs let you do.

Most of the damage output in the game is borrowed from FF13. You want to hit a single enemy, preferably with their weakness, so that you can build the stagger gauge. Once the stagger gauge hits full, a high damage multiplier kicks in and you are supposed to nuke down the enemy as soon as possible. While this sounds good on paper, the issue is that most enemies in the game have super armor until they are pressured or staggered. Nothing will even make them flinch. This is literally one of the worst things to do in an action game as it prevents you from comboing them. They just sit there and swing back at you. If you take any damage, your combos and special attacks are cancelled. I understand applying this concept to larger enemies, but doing it to nearly every single enemy is just dumb. 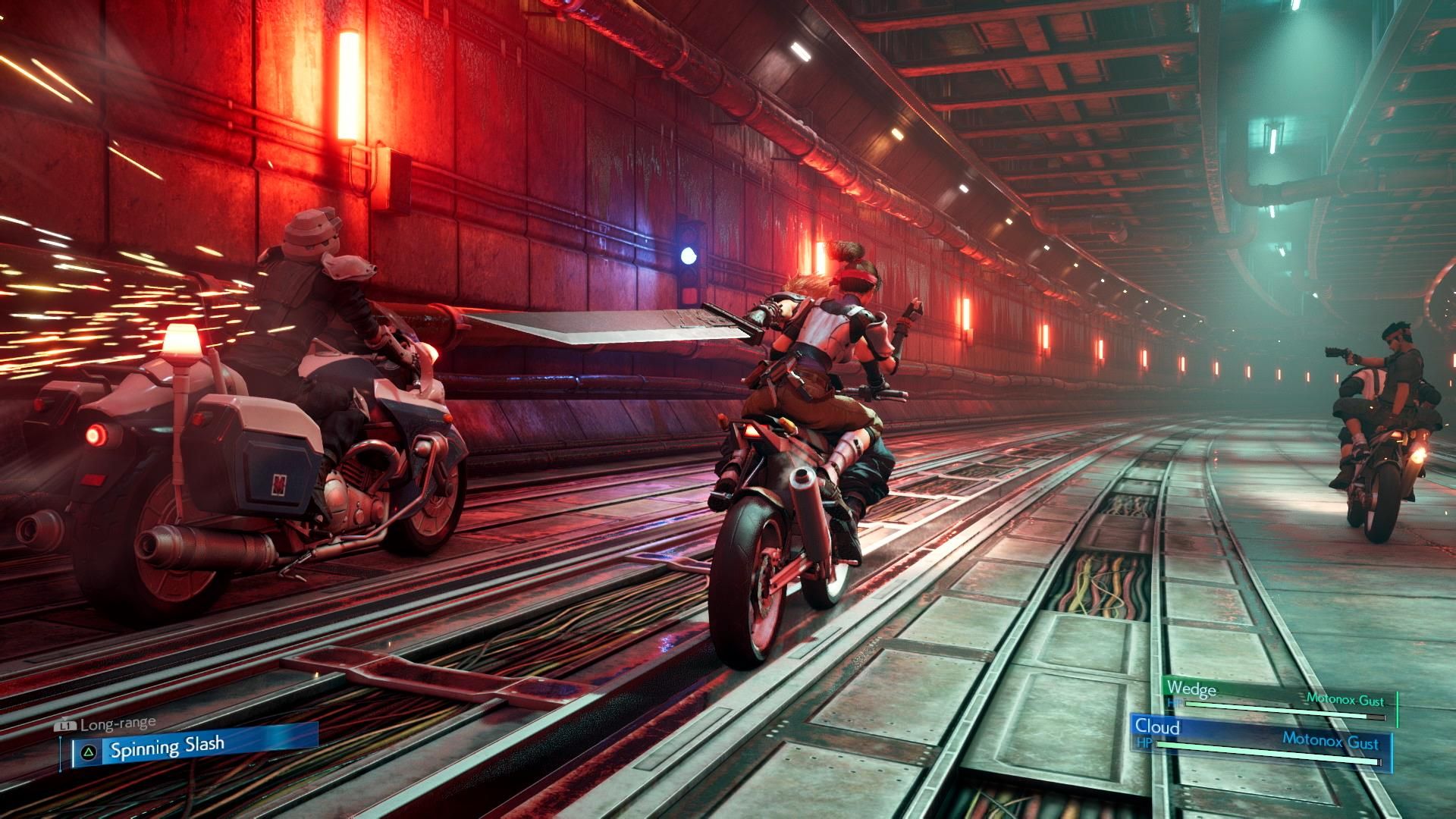 The materia system is back, but not with as many options. You have weapons with upgrades that you can add slots to, link slots, and even add additional effects like conditional damage. Materia can be used to make weapons and armor possess elemental attributes. The issue is that there are not many materia to choose from. There are some materia that you can get more of if you play the game more than once, and others that you cannot. My biggest issue was the fact that there was only one "Magnify" materia in the entire game. Magnify essentially allows you to target all allies or all enemies with a spell. It would have been nice for heal or haste, but since you only get one copy the whole game, it really is not a viable option. The same applies to many of the other support materia too. The restrictive actions of support needing ATB makes the attack supports just fail. The elemental links do find use if you know the boss coming up and what it does. But overall, links just feel like a waste most of the time. One link is more than plenty on most characters. Just make sure you have the basic elements early game and proper support late game. By the end game, you have enough extra slots to just tack on HP Up on everyone. It will let you cheese your way through most battles by turning your characters into HP sponges.

I honestly have little to say that is positive about FF7R other than it could be worse. The game is an action game with RPG elements tacked on and somehow ended up with the worst of both worlds. The semi-auto targeting and combat only accentuates the worst aspects of the genre. A lot of their systems need heavy refinement and tuning, especially how their ATB bars work. Super armored enemies make the bad feeling even worse. Considering that the company has been making action RPGs for more than twenty years and their recent shifts to focus on the action elements more, it does not feel like they have made much progress at all. This is before you consider what other entrants into the action RPG genre have been able to do. They are making improvements with each attempt, but this one felt like it sacrificed gameplay for cinematics this time around.