Horror games are toxic creations. It doesn’t matter what kind of horror they’re striving for half the time. Even the most predictable jump scares tend to spook the bejeezus out of me. And yet, I continuously punish my senses by playing (or suffering through) horror games.

But I try to have a rule - the quality of the game has to be worth the anxiety that will inevitably consume me.

This time around, I played Capcom’s remake of 1998 classic Resident Evil 2. (Un)Fortunately, this remake passed my quality requirements by a large margin and proved to be one of my favorite games released in 2019. And that’s despite feeling me with an overwhelming sense of dread from start to finish. Resident Evil 2’s tense atmosphere, gruesome visuals and satisfying gameplay all come together to create an exhausting, exhilarating and memorable survival horror experience. 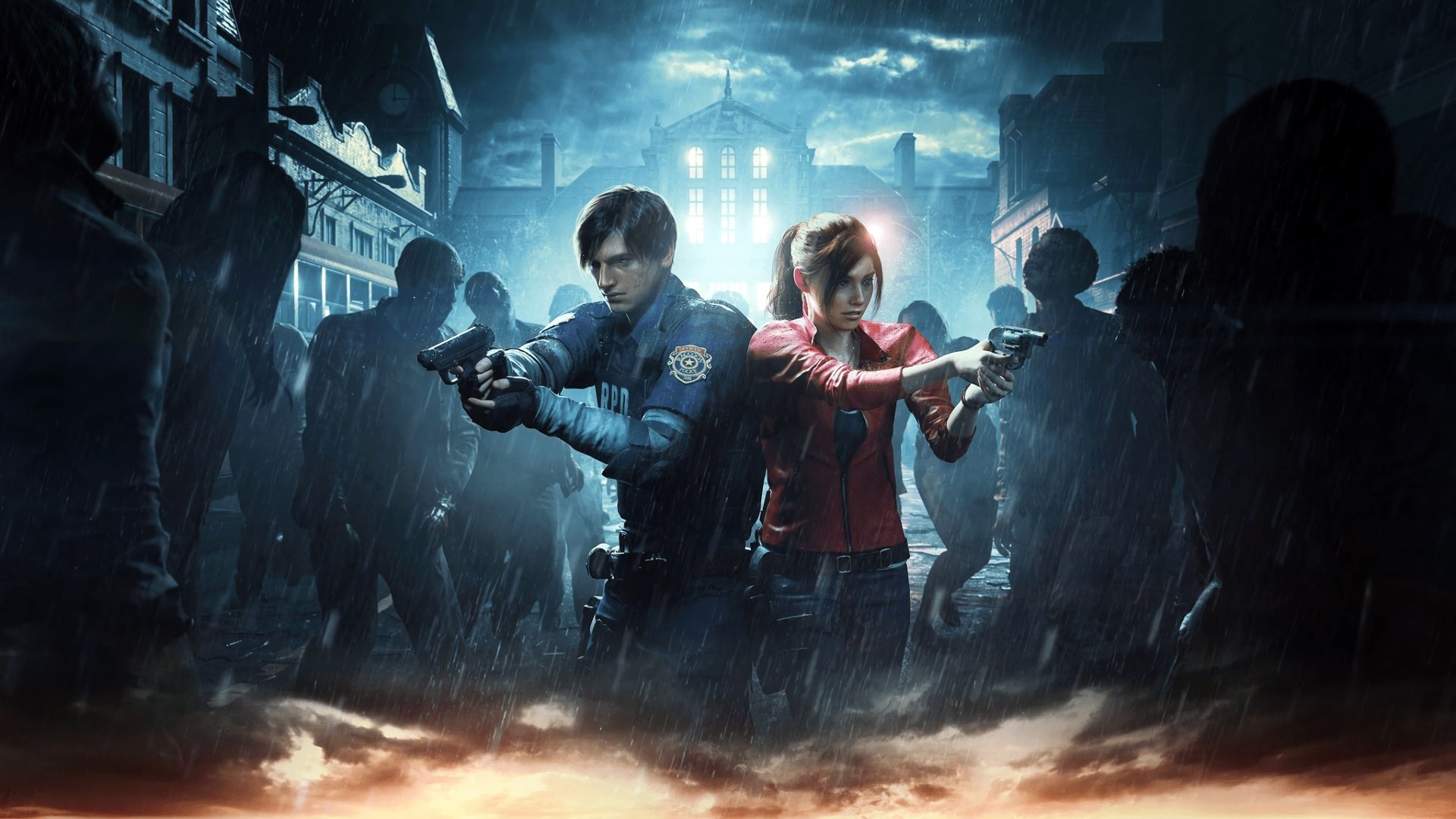 I’m aware this is a remake of a game from 1998 and most of you probably already know the premise, but as someone who has not played the original, I’ll outline the premise for my fellow Resident Evil noobies out there.

Resident Evil 2 takes place in 1998 in Raccoon City just after the viral outbreak of the T-Virus, a bioweapon developed by the super evil Umbrella Corporation. There are two campaigns where you experience the story from the perspective of two different characters: series veterans Leon S. Kennedy and Claire Redfield. As both of these characters, you find yourself trapped in the Raccoon City Police Department trying to figure out what is going on and how to get out of there as soon as possible - all while being stalked by the unstoppable Mr. X.

The story is fine but not the start of the show by any means. It’s campy yet engaging, with fine voice acting throughout. There is increasing urgency as you play through the title, particularly after Mr. X is introduced. The characters that you play as are plenty different, and their respective motives for being in their situation give each campaign its own flavor. Leon is a rookie Raccoon City Police Officer walking into the outbreak on his first day on the job. Claire Redfield, on the other hand, is a civilian searching for her brother Chris who has not been heard from for a few days. Leon is duty driven, and Claire has family on the line and is more personally driven.

I have only completed Leon’s campaign thus far, but have begun to dabble in Claire’s. While both campaigns start the same way, they do divert at a certain point. I have been a little disappointed that Capcom didn’t do a better job with continuity though. Instead of it being one story from two different people’s perspectives, it often just mixes up character locations to suit the story for each campaign. This means that when Leon should be in the police station while Claire is outside, it just ends up being the opposite. This slightly dampened my drive to play as Claire after finishing up my time with Leon.It doesn’t ruin the actual fun of the game, but it does feel like a missed opportunity.

Resident Evil 2 has undergone quite a change since it was first released in 1998. There is nary a blocky character to be found in Capcom’s RE Engine - unless you wear the right skin, of course. On the gameplay front, Capcom took the locked camera and tank controls of the original, pounded them to a fine ash, and reformed it into the third person shooter style that was first introduced to the series in Resident Evil 4. The beauty of this remake is that for me, a guy who never played the original, it feels brand new out of 2019 as opposed to a remake of a game in 1998 - and I’ve heard the same thing from many who did play the original.

The Police Station and other locations in the game are highly detailed, and the feeling of traveling throughout the police station without a single loading screen makes for a relentlessly stressful and engaging experience. While there are safe rooms where you can take a breather and plan your next move, Mr. X is stalking you throughout the rest. His AI is literally looking for you on each floor of the police station from the moment he first appears, and his footsteps can be heard throughout the police station as he stomps and slams through doors to find you. I hope more remakes strive to find this balance of modernizing the original while retaining the essence of what made the original special to begin with. Resident Evil 2 may have set the bar. 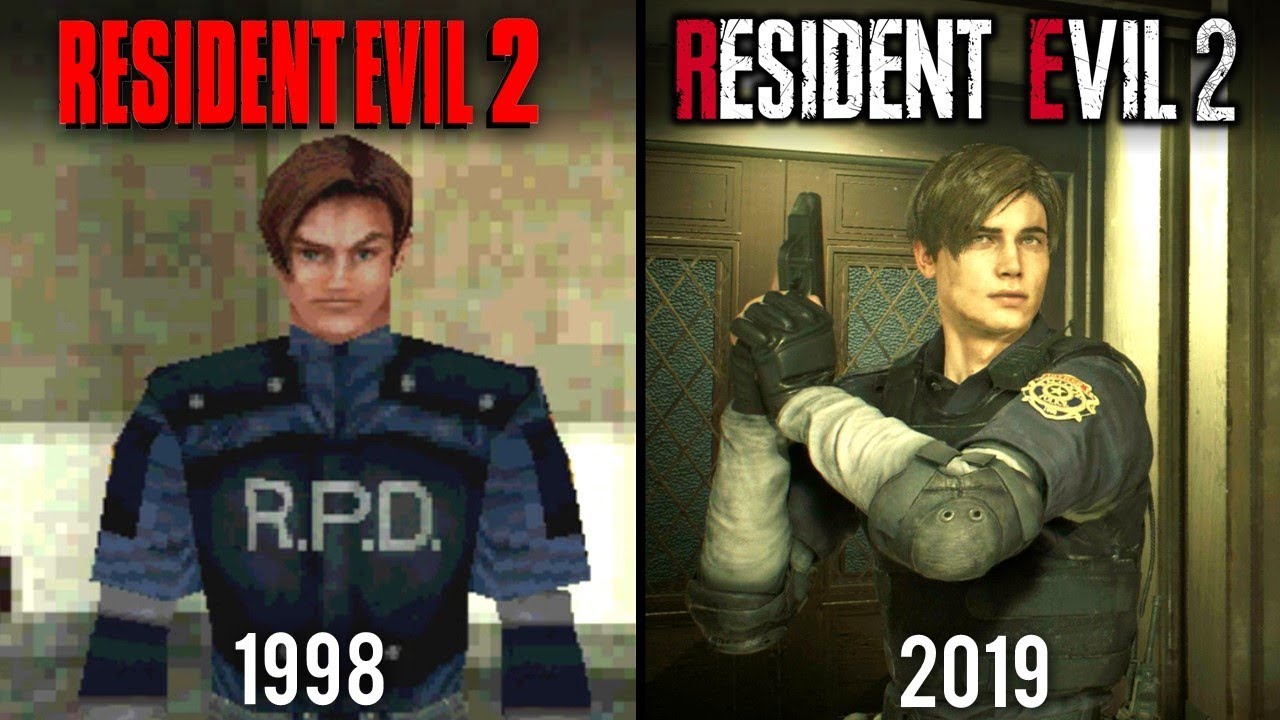 The moment to moment gameplay in Resident Evil 2 is a mix of puzzle solving and survival horror. As is Resident Evil tradition, you often need to find various puzzle pieces throughout one location in order to move forward into the next. This is definitely the case in Resident Evil 2. Fans of the series might love this stuff, but I find this element repetitive. I don’t love backtracking, but I know it’s one of the defining features in a Resident Evil game.

In terms of survival horror...well, I’ll just sum it up like this. From start to finish during Leon’s campaign, I felt incredibly low on resources. The Raccoon City Police Department is a cramped, dimly lit and dangerous place. Disturbingly, despite being THE Police Station for a metropolitan area, it is seriously lacking in ammunition. This title takes advantage of that and demands that you are careful with the little resources you have to survive the game. Just as soon as I feel like I have truly stocked up on ammo, it is all stripped away from me in one bloody shootout or close encounter with Mr. X, and I’m back where I started. Scared, and alone.

This goes beyond ammo, too. When I thought I would have enough healing items for the next section of the game, an unexpected encounter would leave me desperately looking for more. It was a careful balancing act of not wasting ANY item that the game. I would wager that roughly half of the tension I felt in the game was tied to trying to not waste resources. I think Capcom did an excellent job of giving the player just enough resources to keep the player on their toes, while still ensuring there are enough to finish the game.

I specifically remember a scenario where I felt hopeless in a room with several zombs, and multiple Lickers (blind wall zombs) that ambushed me. I could not remember which door I came through, and basically ended up backed in a corner taking a deep, deep zombie pounding. This fight depleted almost all of my supplies. Woohoo, Leon is still alive, yay! But what about the next room? You have to continue the game and there are a finite number of resources that you can rely on. This exact thought process is what kept me hooked to the flow of this remake’s gameplay, and what makes it a blast. 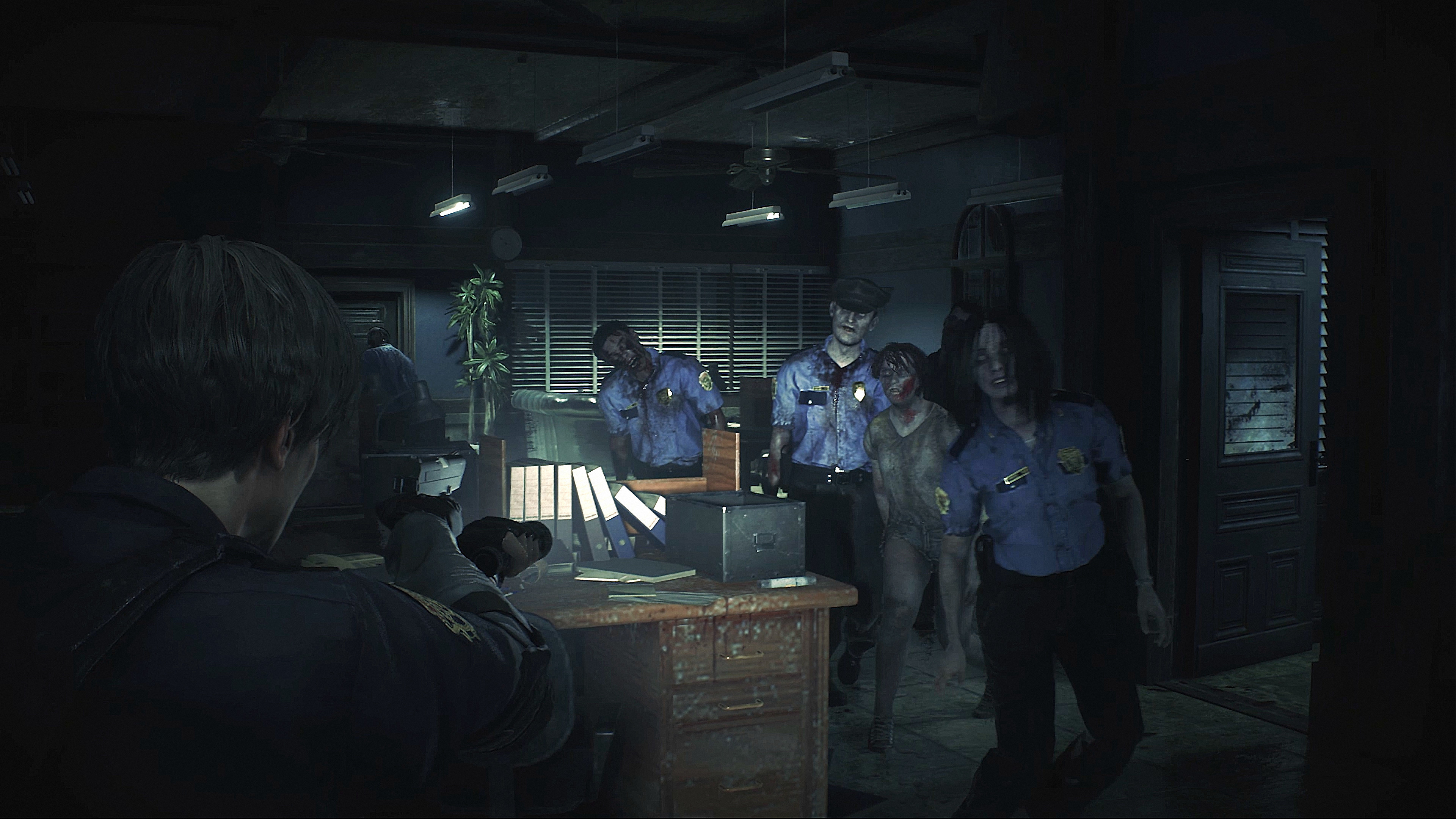 I’m a strict headphone gamer on PC. This goes double for horror games. I don’t know why I’m such a glutton for punishment, but I have too much respect for the way these developers designed sound to not listen to it intensely. They strive to traumatize me, and I strive to find out if they can succeed.

Throughout every area in the game, haunting ambient noises follow your path. Zombie moans. Pipes groaning. Wood creaking. Scratching in the walls. Your own heart pounding in your chest. There’s a steady amount of unease as you play through the game, and it carries into every environment you come across in the game.

The worst part is that all of that is true before the best and worst sound in the game makes itself known. That’s right - Mr. X’s big ‘ol boots stomping down the hall, kicking in doors on his way to kicking your ass. Every single time that man’s boot touches the floor, it shakes my brain. You can tell when he’s above you, when he’s beside you, when he’s directly BEHIND YOU. I’ll tell you what, guys - it’s a tough time out there.

But don’t you worry - Leon and Claire have loud feet themselves. Possibly the loudest feet, in fact. As soon as you start running, no matter where you are, Mr. X can hear you. And he is coming.

Fortunately, once you stop running and decide to shoot your way through all of the horror, it sounds beautiful. Every gunshot and explosive packs the right amount of punch, and getting that glorious explosive headshot on a zombie is visceral and deeply satisfying. 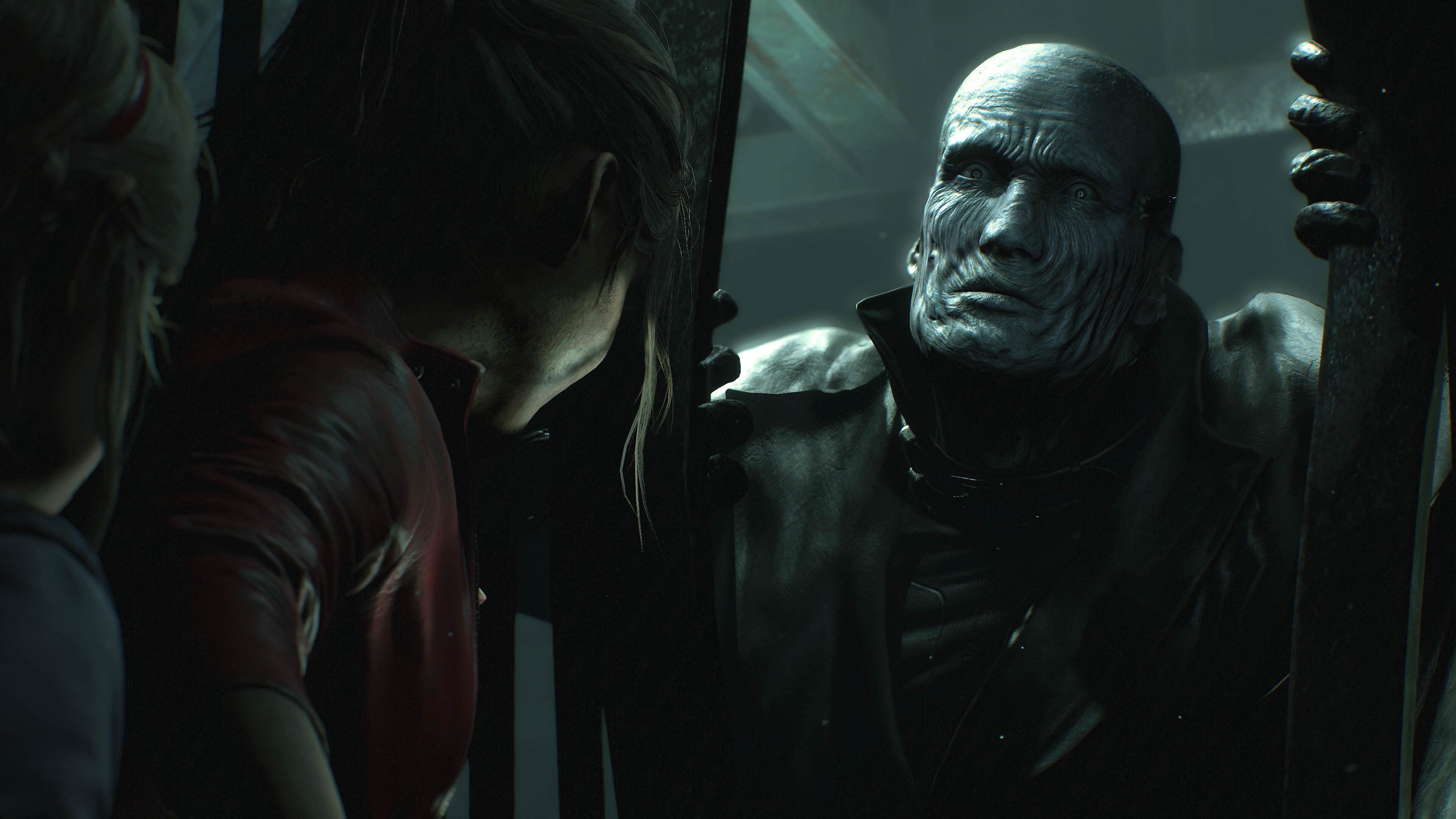 The gist of it is that if you enjoy the Resident Evil series, zombie games or media, or are simply looking for some quality horror - this is a game worth buying. For most, it gives around 10 hours of gameplay for one of the campaigns. With two campaigns, 2nd run versions of each campaign, and a few extra missions sprinkled on top, you receive a lot of gameplay when you buy Resident Evil 2. You can often find it on sale if you are patient enough to wait for the next console or Steam sale, so you can easily add to that value.

Just keep an extra pair of britches nearby.